“Future State: The Next Batman” 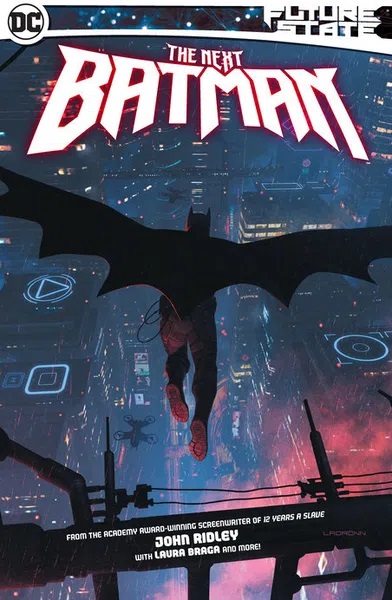 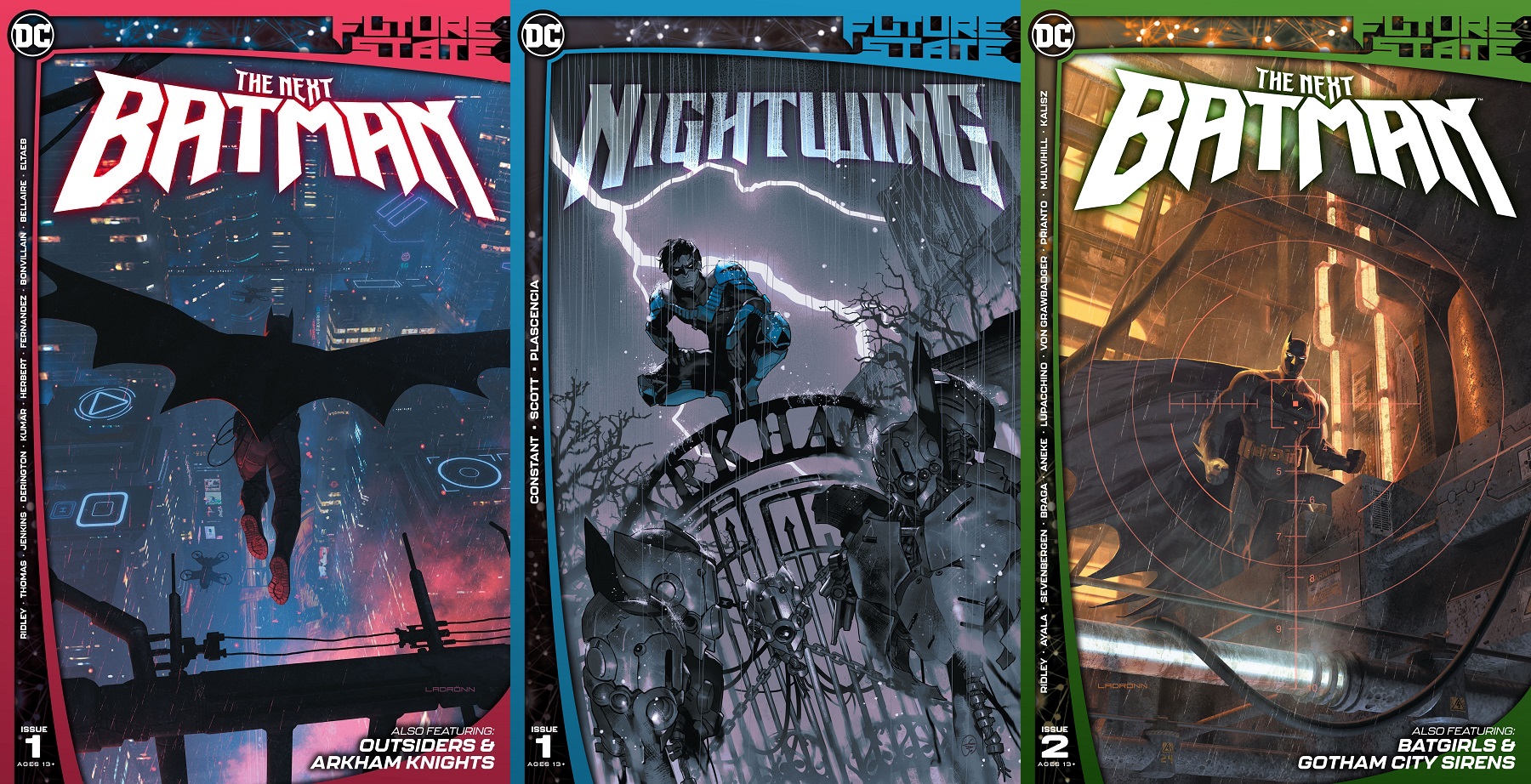 Whereas book like Future State: Superman, and Future State: Justice League are set in times that mention these stories, many of those tales feel far away into this twisted dark tomorrow. The adventures collected in this volume feel very real, hit closer to home, and feel almost inevitable. One of the main reasons for this is that everything we’re reading in the pages of Batman, detective Comics, and Nightwing seem to have events heading, almost inevitably, towards the world of DC Comics’ Future State.

The name Bruce Wayne crops up a lot in this book, but the Batman we see battling the Magistrate is the Next Batman: Tim “Jace” Fox. In this future, the huge, sprawling future Gotham City is under martial law. It’s become a police state where order is maintained with an iron fist, and citizens are “protected” and regulated by a private security force led by the infamous Peacekeepers. 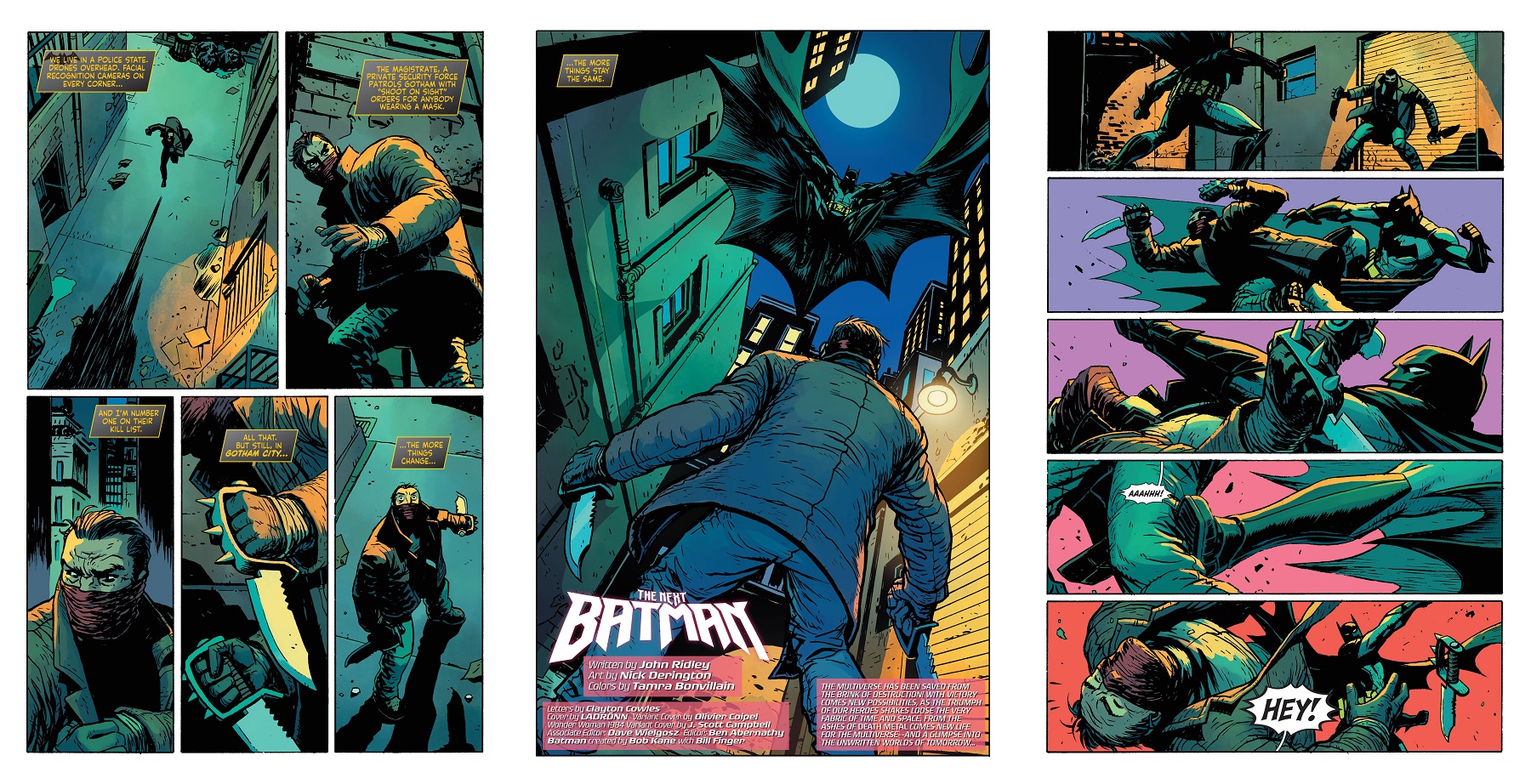 The State of DC Comics’ Future

Using advanced weaponry – stolen and corrupted from Wayne technology research – invasive surveillance, and military tactics, the Peacekeepers’ mandate is to maintain the safety of the citizens of Gotham, regardless of any Constitutional rights, and to hunt down, incarcerate, or kill all masked vigilantes, villains, and criminals found within the city limits. While these tyrants feel that this will keep Gotham safe, this is at the cost of civil liberty, and freedom.

I loved John Ridley’s stories the first time around, but having them all collected under one cover is an absolute joy. The only thing that could’ve made the series – and subsequent collected edition – better, would’ve been to have the incredible Nick Derington handle the art on all four chapters. Don’t get me wrong, Laura Braga is a fantastic artist, but I’m a real stickler for having one art team handle a whole story, as it can pull you out of the proceedings when there’s a noticeable switch in styles. Nick Derington’s is unique, and even though he handled the breakdowns for chapters 2-4, the change is palpable, particularly after seeing his unique visuals in part one.

The fact that the opening instalment is colored by Tamra Bonvillain, while the next three are handled by Arif Prianto doesn’t help. Thankfully both artists are great at their job, and they elevate the visuals. Many readers probably won’t even notice the shift in styles and feel… sadly, I’m an old, dyed-in-the-wool ultra nerd, so I felt it keenly. 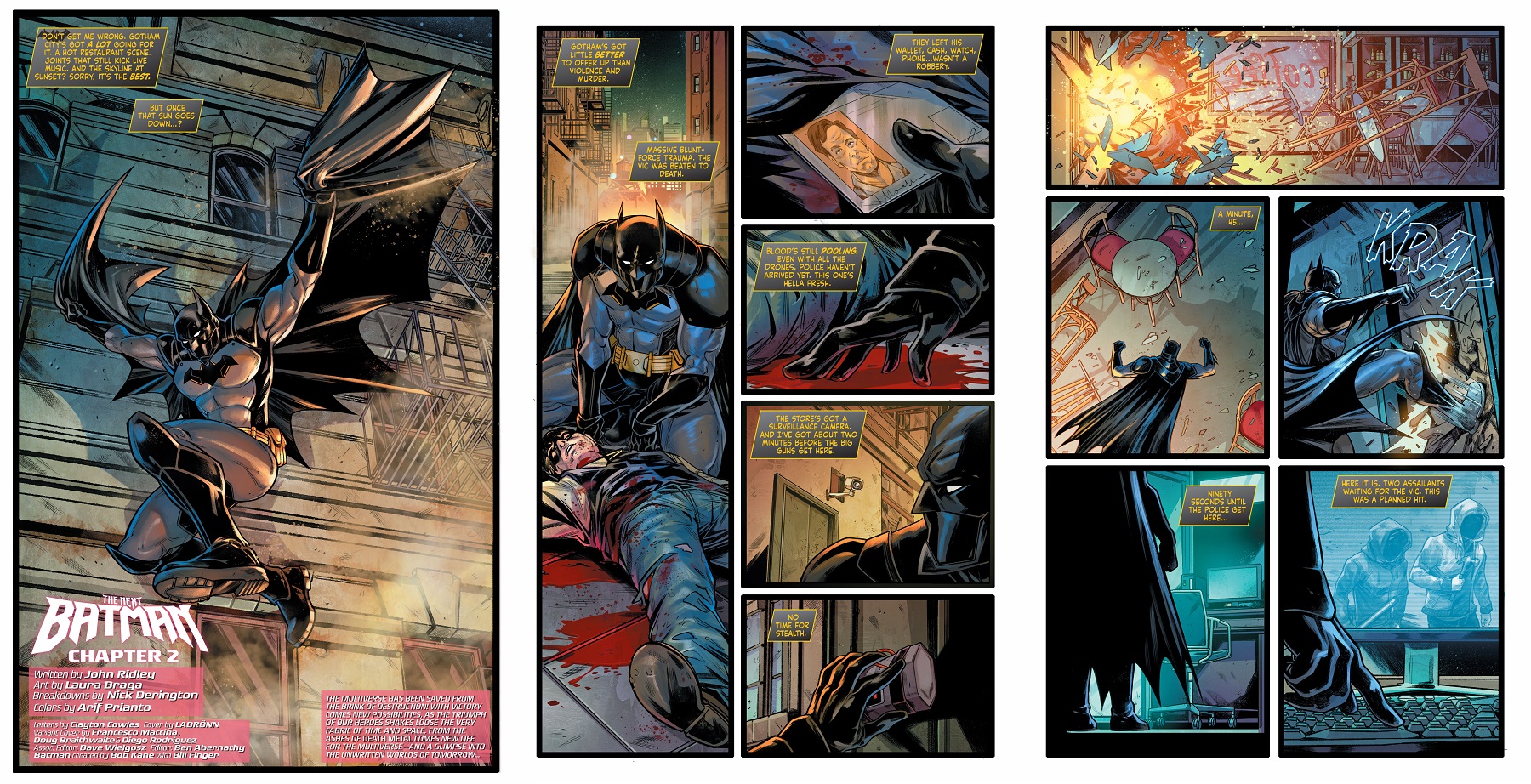 In the wake of Batman’s (apparent) death, Tim Fox has taken over the mantle of the Bat, and Dick; alongside Barbara “Oracle” Gordon, Helena “Huntress” Bertinelli, Cassandra “Batgirl” Cain, Tim “Robin” Drake, Kate “Batwoman” Kane, Kirk “Man-Bat” Langstrom, Harvey “Two Face” Dent, and Talia “Daughter of the Demon” Al Ghul; are the resistance force, fighting back against the Magistrate, and their Peacekeepers.

Andrew Constant stays true to his name, by delivering two tight, action packed, yet extremely character driven chapters. It’s so great to see a new Batman from outside the core family who’s not a psycho or a killer, but rather a worthy and honorable successor to Bruce Wayne’s legacy. Also, seeing a dynamic duo, consisting of Grayson and Batman, fighting side by side once again must surely be every fanboy’s dream.

There’s some truly beautiful art and lettering in this book; as provided by the hugely talented Nicola Scott, Ivan Plascencia, and Wes Abbott. When the art in a comic-book is excellent, and is married to writing that’s as strong as the visuals, that’s when you know you have a hit on your hands. The pages reproduced above are great, but there’re a few scenes later in the tale, notably when the resistance makes its presence felt, that are pure comic-book gold.

The costume designs are great, the expressions, storytelling, and action scenes are pitch perfect, and the colors both fit, and enhance the art. The letters flow, and the sound effects pack a punch… this whole story just works. 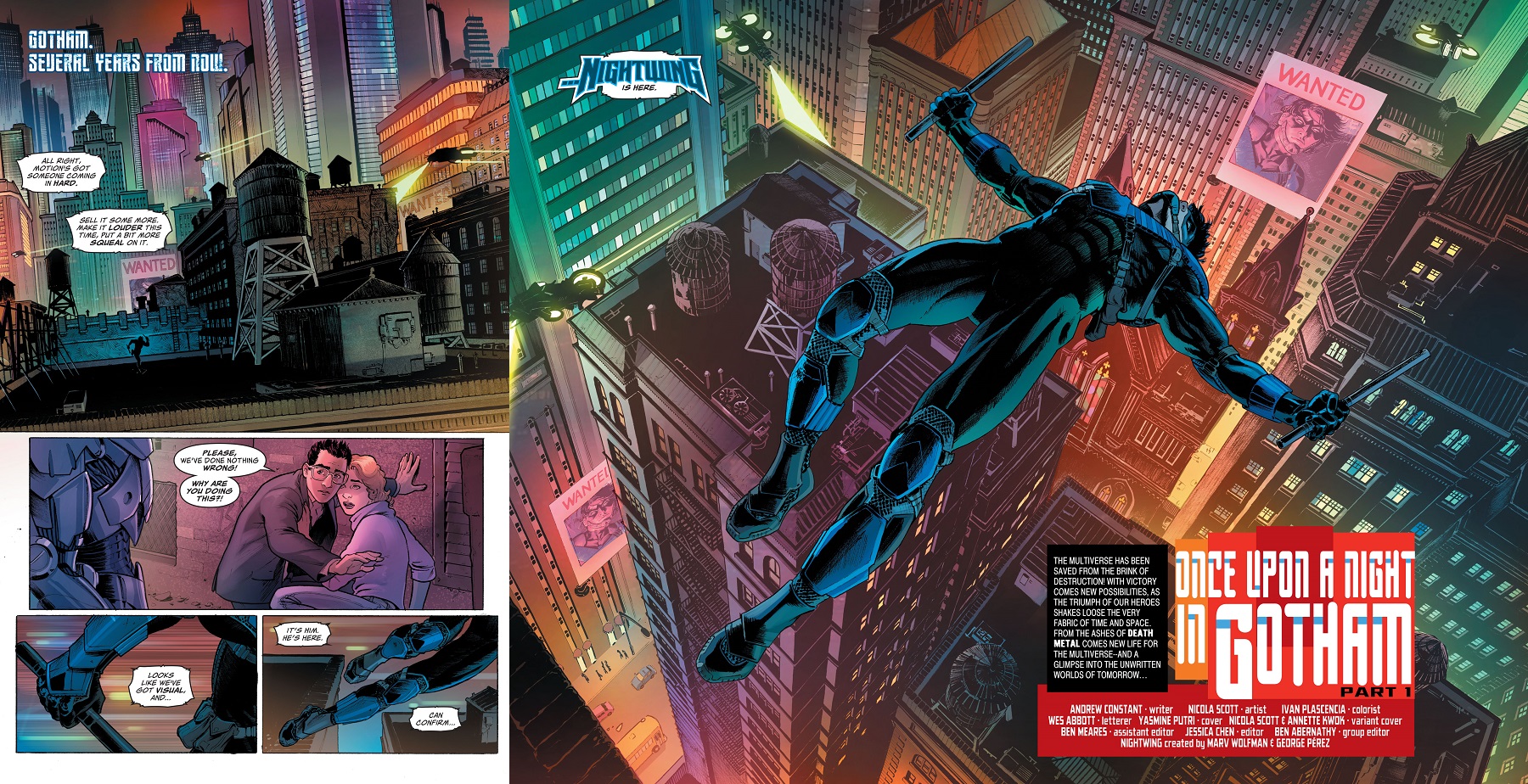 A World Full Of Extras

Future State: The Next Batman also collects the two part Gotham City Sirens, The Outsiders, Grifters, Batgirls, and Arkham Knights backup stories. They’re all great fun. There are a myriad of different art styles on display, as well as action stories, tales of intrigue, and fun-filled romps. Characters from the full 80 year history of the Batman, and his friends and enemies are on show, but in settings far removed from any that readers, and the characters themselves, are familiar with.

The Grifters – from Future State: Dark Detective, is a complete winner. Matthew Rosenberg and Carmine Di Giandomenico have done my favorite original Image Comics character, and WildC.A.T.s member, justice. I always liked Cole Cash, and this neat little two parter made me love him all the more. Rosenberg has kept all the character’s sarcasm, wit, and charm, and Di Giandomenico’s one hell of an artist. Sometimes back-up strips are the weak points of any comic that feature them, but this two part story, and all the other gems in this book, were an absolute blast to read.

You’ve probably already guessed this, but I really enjoyed Future State: The Next Batman. It was an exciting ride, as we got to see new and very cool versions of our favorite characters, and I can’t wait to see how what’s happening in the now, could (or will?) lead to this crazy future.

I’m making sure I get a front row seat, what about you?

The book comes out on June 16th, but is available to pre-order from Amazon, and all good book retailers right now.

Director Thinks the Nightwing Movie is “Not Lost Yet”