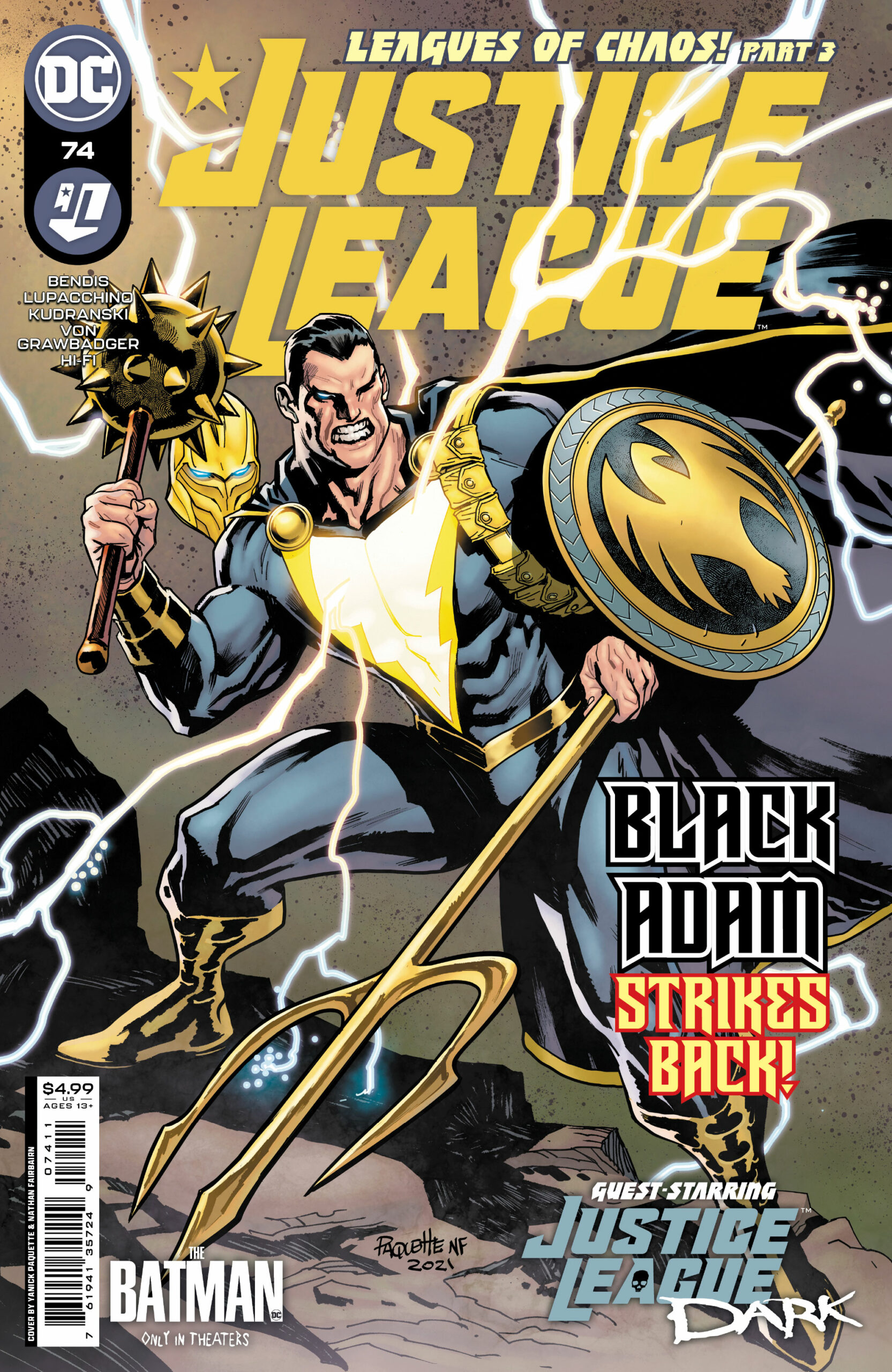 Chaos abounds, as both Leagues make their final stand against the evil Lord Xanadoth in this week’s Justice League #74.

The Lord of Chaos has possessed the body of Black Adam and kidnapped Madame Xanadu. Having bunkered down in Black Adam’s royal palace in Kahndaq, Xanadoth then attempts to bend Madame Xanadu to her will; however, these machinations are interrupted by a rescue party of League members.

In terms of its narrative, Justice League #74 is a mess. Bendis spent two issues setting up this conflict, and it has almost no payoff whatsoever. Let’s start with the issue’s most egregious sin: the Xanadoth/Xanadu connection. In last month’s issue, Xanadoth outright states that he’s somehow connected to Madame Xanadu’s past. However, when it comes time for the traditional villain monologue, Xanadoth literally catches himself mid-sentence and essentially says “Nah, I’m not going to tell you anything.” Bendis literally set up a big reveal only to pull the rug out from under the readers.

While a more gracious reader might argue that Bendis will return to this plot point at a later date, my feelings are far more cynical. This was Bendis’ last issue of Justice League, and in my last review, I noted that his plan seemed to have been hijacked by DC’s editorial staff. My guess is that he had a nugget of a story and ran with it before he had the chance to plan out the ending. Therefore, he had three issues to tell what easily could have been a 4-6 issue story. Hence the entire issue feels rushed and anticlimactic.

Who’s That In The Shadows?

The next sin on my list is this issue’s use of color. Justice League #74 does that thing where each artist is assigned a different setting. This also happens to be true for the colorists. Szymon Kudranski was assigned the battle sequence, and it’s almost impossible to figure out what’s going on in any given panel.

Kudranski saturates the page in black to the point where I struggled to identify characters. For example, a portal opens at one point and the page identifies five heroes coming to the rescue. At first, I assumed that only five came through this portal, but it became clear as the issue progressed that other heroes were there. Some were directly named in dialogue while others required a magnifying glass.

Also – I’m pretty sure there’s a continuity error in terms of Xanadoth’s design. In Justice League #73 the villain simply looks like Black Adam. Yet in this week’s issue, he seems to be wearing a helmet that looks a lot like Doctor Fate’s. Mind you – I don’t know if this is the case or not since each depiction of the character is saturated in black.

It’s a real shame that the art is so problematic. The page layouts and designs look cool, and the issue’s art does a great job establishing an ominous mood. Nevertheless, if the art of an issue becomes an impediment to storytelling, then the issue has problems.

Justice League #74 is an underwhelming finish to an underwhelming run. Bendis’ story doesn’t end with a bang but a whimper, as there’s little payoff for any of his contributions to the franchise. We still don’t know what’s up with Naomi. Hippolyta does almost nothing, and, while Bendis spends some time exploring Black Adam, his work feels unfinished. What was the point? Why was he included? These unanswered questions are going to haunt this run forever.

Final Verdict: It’s a muddled mess – as was Bendis’ entire tenure on the series.