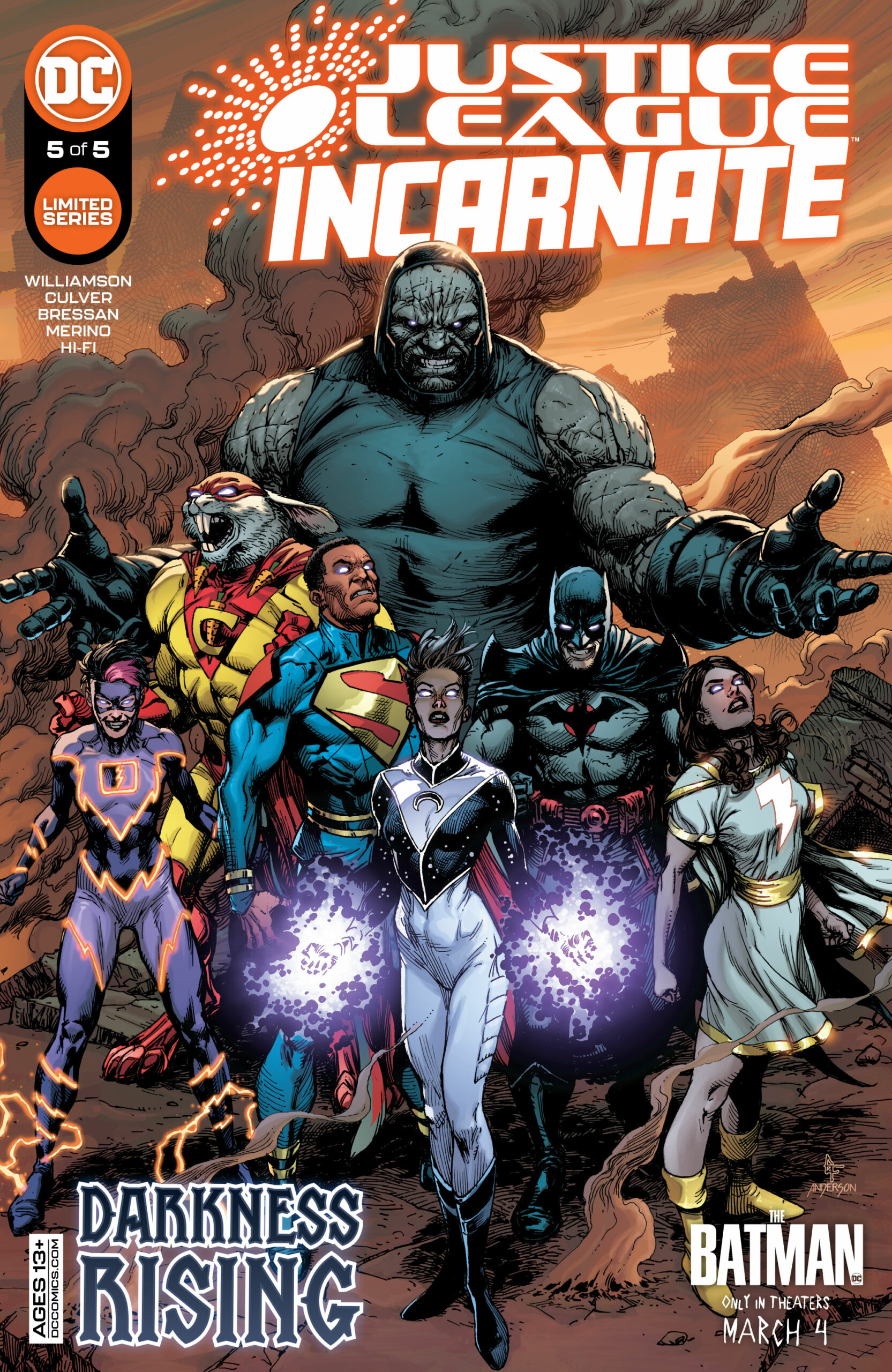 Darkseid goes toe-to-toe with the Great Darkness, as our heroes fight each other in this week’s world-ending Justice League Incarnate #5.

Last issue Williamson and Culver gave us the big reveal by showing us the man behind the curtain… who actually isn’t a man at all. Rather, the upcoming Dark Crisis will feature a villain first showcased in Alan Moore’s seminal Swamp Thing run: the Great Darkness. It turns out, this villain is responsible for every Crisis event dating back to the Grandaddy of them all Crisis on Infinite Earths. “But wait,” I hear you say “I’ve read all of these Crises, and no one ever mentioned anything about the Great Darkness.” Yup – you’re absolutely right. Yay for retcons.

This brings us to this month’s final issue. Half of the Justice League Incarnate has been possessed by the Great Darkness, therefore, those members who still have their wits about them are faced with the nasty predicament of fighting their friends. Meanwhile, Darkseid’s trading licks with a member of the Gentry (see The Multiversity). Like other cosmic beings in the DCU, these villains are also puppets of the Great Darkness.

The End of Act II

When Williamson announced that he was taking the reigns of DC’s metanarrative, he said that he had a three Act plan. These Acts turned out to be Infinite Frontier, Justice League Incarnate, and the upcoming Dark Crisis. In case any of you are wondering why this structure is significant, much of modern storytelling revolves around three Acts. Usually, the basics of each Act are as follows (shout out to Mark Rosewater from Wizards of the Coast for this framing):

Justice League Incarnate definitely fits that bill for Act II, as things don’t end on a particularly cheery note. The Great Darkness and its various allies are on the march, setting up for both Justice League #75 (which has been billed as the “Death of the Justice League“) and Dark Crisis.

My only real complaint about Act I and II of Williamson’s plan is really their length. For the record, I actually like Williamson’s story, as it’s a great concept for a Crisis event, and I’m chomping at the bit to see what happens next. However, Death Metal doesn’t feel like it was that long ago. DC at least gave us two years between Metal and Death Metal. Both Infinite Frontier and Justice League Incarnate could have used 2-3 more issues to not only develop their storylines but also to put a little bit more distance between Death Metal and Dark Crisis. As much as I love Crises, event fatigue is a real thing. Crises feel more significant when they’re farther apart.

Justice League Incarnate #5 looks great. Andrei Bressan and Jesus Merino work well together. In fact, their styles are so similar I honestly couldn’t tell who drew what. However, I would have liked to see this level of consistency throughout the entire series. DC hired a ton of different artists to work on Justice League Incarnate. Sometimes this worked, like when different art styles represented different Earths in the Multiverse. Other times, there were moments where the art styles clashed, which really makes for an unpleasant reading experience. Usually, this became a problem when I single setting was drawn by individuals with significantly different styles.

Personally, Bressan and Merino’s styles are so inoffensive that DC should have stuck with them or those of their ilk. My point is that while this issue looks great and will likely slot in nicely with most of the other issues in this series, Justice League Incarnate will nevertheless be a disjointed reading experience due to the variations in artistic styles.

Justice League Incarnate #5is largely a success. Williamson and Culver deliver a powerful Act II finisher that serves as a great prelude to Dark Crisis. Bressan and Merino work together nicely, as their art is seamless in transition. I may have some small quibbles about the series overall, but these are minor in the grand scheme of things.

What’s truly impressive about Infinite Frontier and Justice League Incarnate is that Williamson has proven himself as both a talented writer and architect. I can imagine that writing the DC metanarrative is not an easy task. Striking a balance between nostalgia and novelty seems complicated, requiring nuance. Williamson delivers both in a fun package that will surely impact the DCU for years to come.