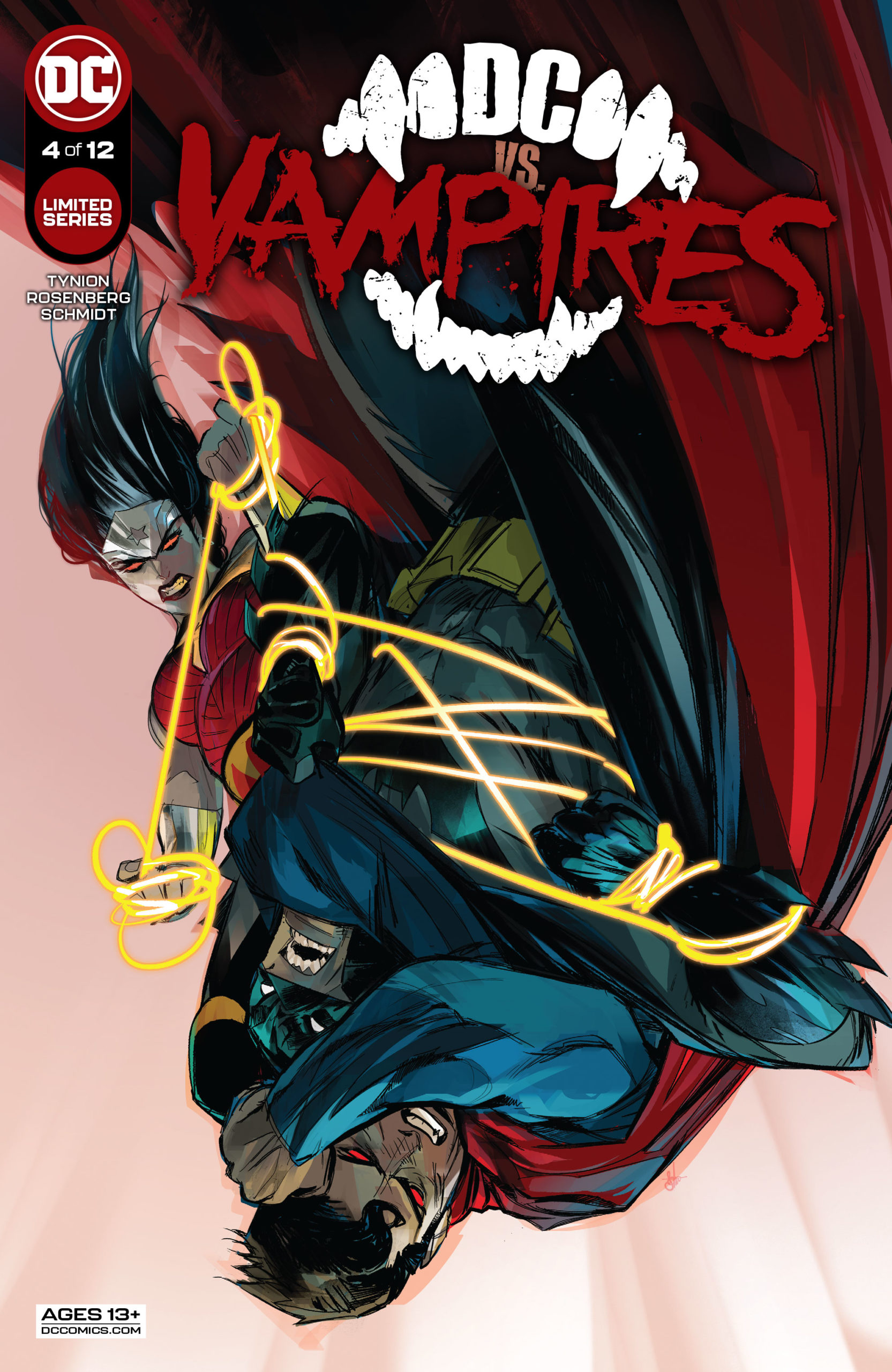 ‘Ello Zee.  What brings a fine magician such as yourselt of #$%^hole such as this?”
– Constantine to Zatanna

In DC Vs. Vampires #4, Batman has confirmed who in the Justice League has been turned into a vampire… but can he make his move before the Justice League is turned against him? It’s hero versus hero in this blood-drenched chapter… with clues to who the new Vampire King might be!

This fourth installment contains a lot of the storyline reaching some crescendo points. I love the Justice League Dark homage with Constantine, Dr. Fate, and Zatanna having some banter… and confrontation. This book sets up John Constantine as the most powerful “antihero/hero” in the DC Universe akin to his character in the DCeased series.

That being said, if it’s an occult threat, like Vampires, we need Constantine. Why Supermen didn’t enlist him to go to War World, I’ll never know… but I digress.

Batman and Green Arrow; I’ve always loved this combo, ever since the old days of the Brave and the Bold comics, albeit Green Arrow and Green Lantern were also a thing at one time. Both are great sleuths and combatants, as we see in these pages. To have them aligned against Vampires is great! However, James Tynion IV and Matthew Rosenberg write a very cold and powerful Batman who poses the question to Oliver; would he kill someone he is close to (paraphrased)?”

Dick and Babs, even Tynion and Rosenberg want these two together (nod to all things Tom Taylor’s doing on Nightwing), but Otto Schmidt draws this couple with all the sexiness and allure of a perfume commercial, or those all-inclusive resort ads. You feel the flirtation ooze from the page. I guess he’ll soon publish a Black Label underground comic starring these two… but I digress again. It’s great to see two other authors acknowledge what WE all want, Barbara and Dick as a couple!

Does everyone know how to get into the Batcave? Oliver, Diana, and all of the JLA?!? Considering that he’s meant to be such a loner, and for the Batcave to have such mystique, how did we get to this point? After all, Vampires do love the dark.

I appreciate the series on a lot of different levels. With no true killings and no true reveals, at least in my reviews, however, there is one item of note. The main cover, which features Superman and Wonder Woman attempting to subdue Batman, indicates a Clark transformation. Unless I miss something, he has combated magic/occult pretty successfully in the past, despite being more vulnerable to it than human beings. He’s the saving grace in all of this so far, so how’s he being duped into thinking Batman and Green Arrow are the vampires? Unless he’s pulling an Andrew Garfield on us… whoops!  I digress…

Give this series a try!