“The Biggest Score Ever” – Conclusion, and “Wolves at the Door” 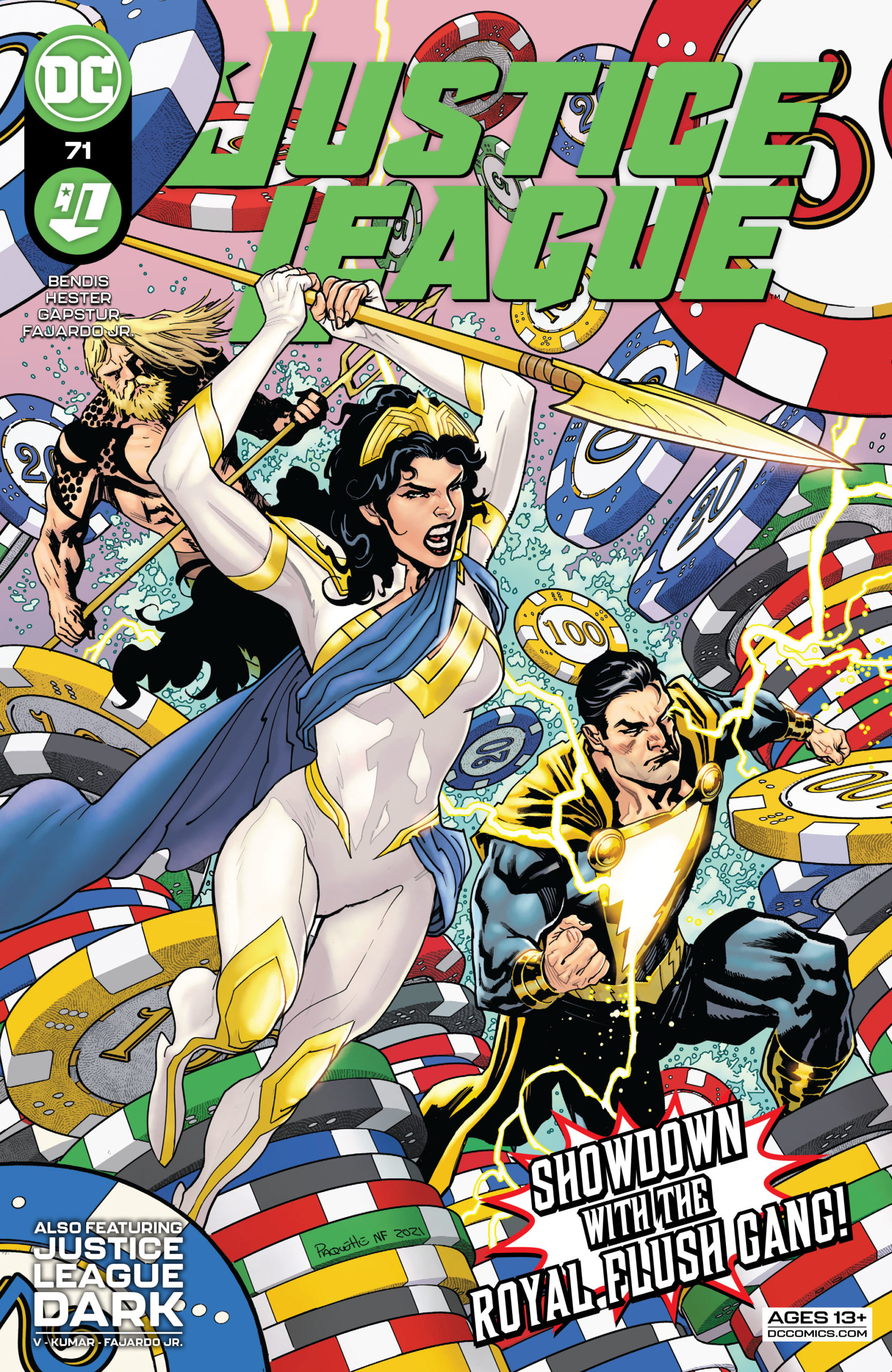 The Royal Flush Gang is out for a stellar score while the League deals with a massive cosmic threat in this week’s Justice League #71.

Last issue, The Royal Flush Gang, at the behest of Leviathan, highjacked the Fortress of Solitude in an attempt to snag a valuable comet. Their plan was to steal Superman’s base, take a joyride into space, grab the comet as it flies by, and return to Earth filthy rich. However, things don’t exactly go according to plan. It turns out that The Fortress is full of insanely dangerous and powerful alien artifacts – one of which rips open an interdimensional portal. Suddenly, a hoard of supervillains pours through this rift, causing a massive confrontation with the League.

Well, That Was Quick…

I point out all of this simply to note that it’s blatantly obvious that Bendis is rushing. He knows he’s got to wrap up his run ASAP; therefore, the last handful of issues feel truncated and inconsequential. From what I gathered (this is me reading between the lines), Bendis had plans for staying on longer, but something changed with regards to DC’s editorial direction. 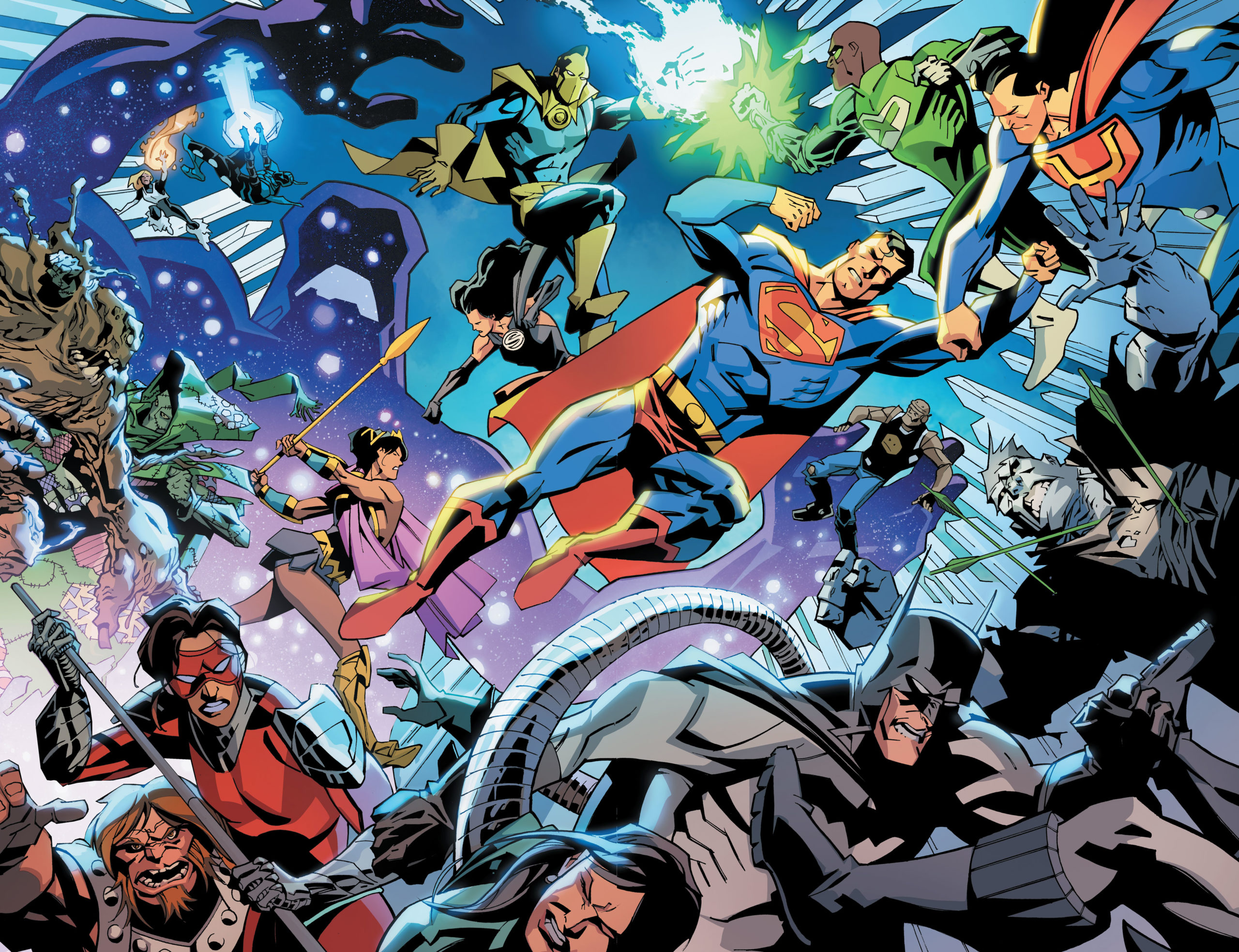 Williamson’s story has taken precedent over Bendis’ ideas, so the outgoing scribe was put on notice to have things wrapped up by issue #74. Therefore, Justice League #71feels very compressed. The aforementioned interdimensional battle literally happens over the course of three two-page spreads. The Royal Flush Gang – for all of their high-level shenanigans – really doesn’t pose much of a threat once caught, and the conflict that propelled the narrative of this story arc was resolved in a matter of minutes.

What’s most frustrating about this situation is that Bendis had spent time teasing some interesting ideas but never got around to exploring them. For example, he puts Black Adam and Hypolita on the team but never gets a chance to explore either of them. Then there’s Naomi, Bendis’ creation, and seemingly favorite character. The opening Namoi arc was fascinating but left unfinished. Hopefully, Bendis will get a chance to explore Adam and Hippolyta in Naomi Season Two, for all three of them have largely been wasted in the last nine issues. 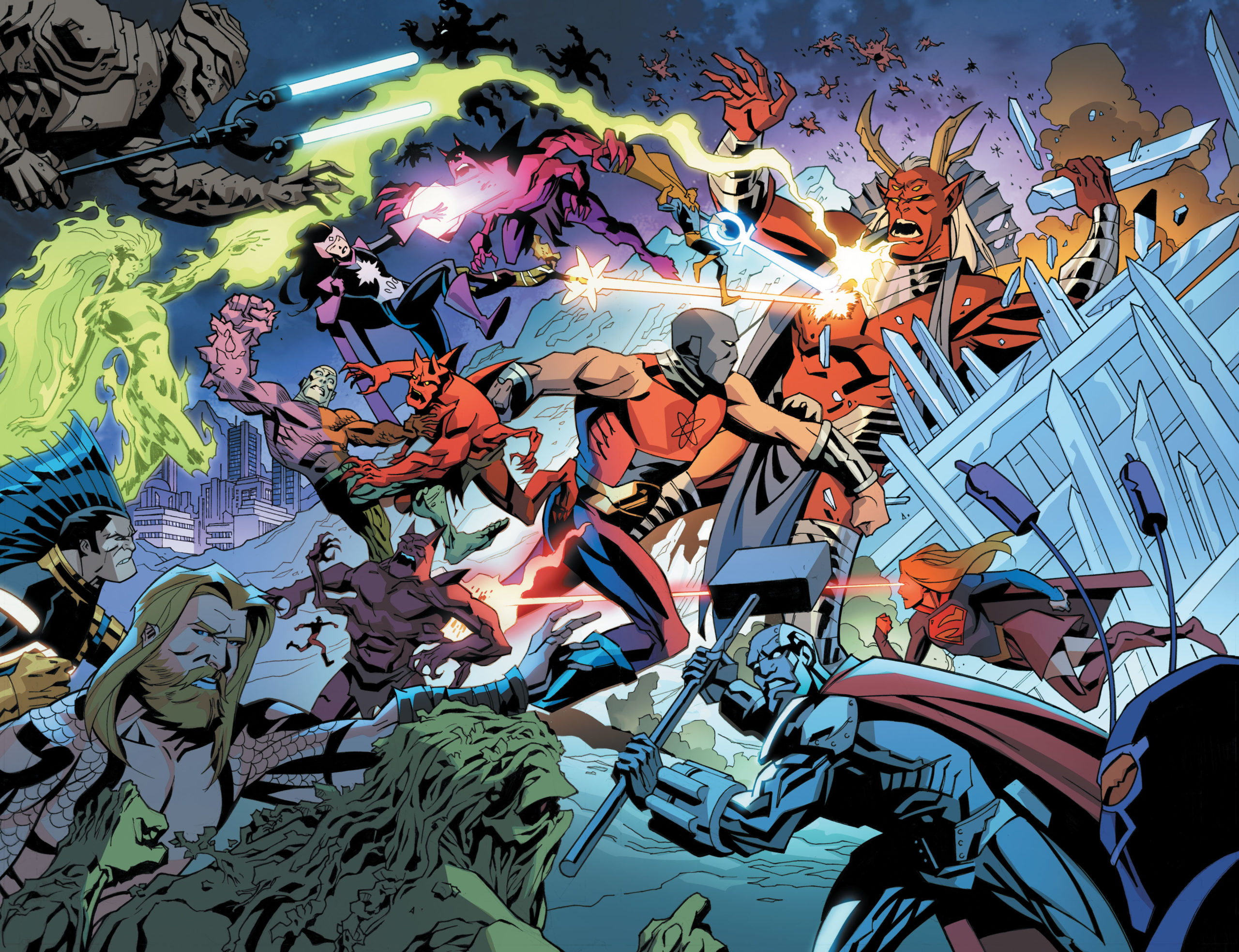 The best part of the past three chapters has been Phil Hester’s art, as he has a wonderfully cartoony style that distinguishes him from many of DC’s normal roster of artists. Hester’s character designs are angular and sharp, and his aesthetic is strangely flat… but in a good way. It’s almost as if he’s drawing a Saturday morning cartoon, which is a departure from DC’s proclivity for hyper-realistic artists. Hester has brought much-needed energy to Bendis’ bumbling scripts, making the past few issues bearable.

Ram V wraps up his work on the JLD backup in this issue; however, the ending feels very peculiar. The last issue ended with the return of Wonder Woman – a plot point spoiled in the Prematurely Released Justice League Dark 2021 Annual. The team was in crisis mode, dealing with Merlin who managed to resurrect Arion, the Atlantean mage, as well as the Upside Down Man who took control of Zatana’s body. The final panel of the previous issue shows the arrival of Wonder Woman and promises the conclusion of Ram V’s story in this issue. 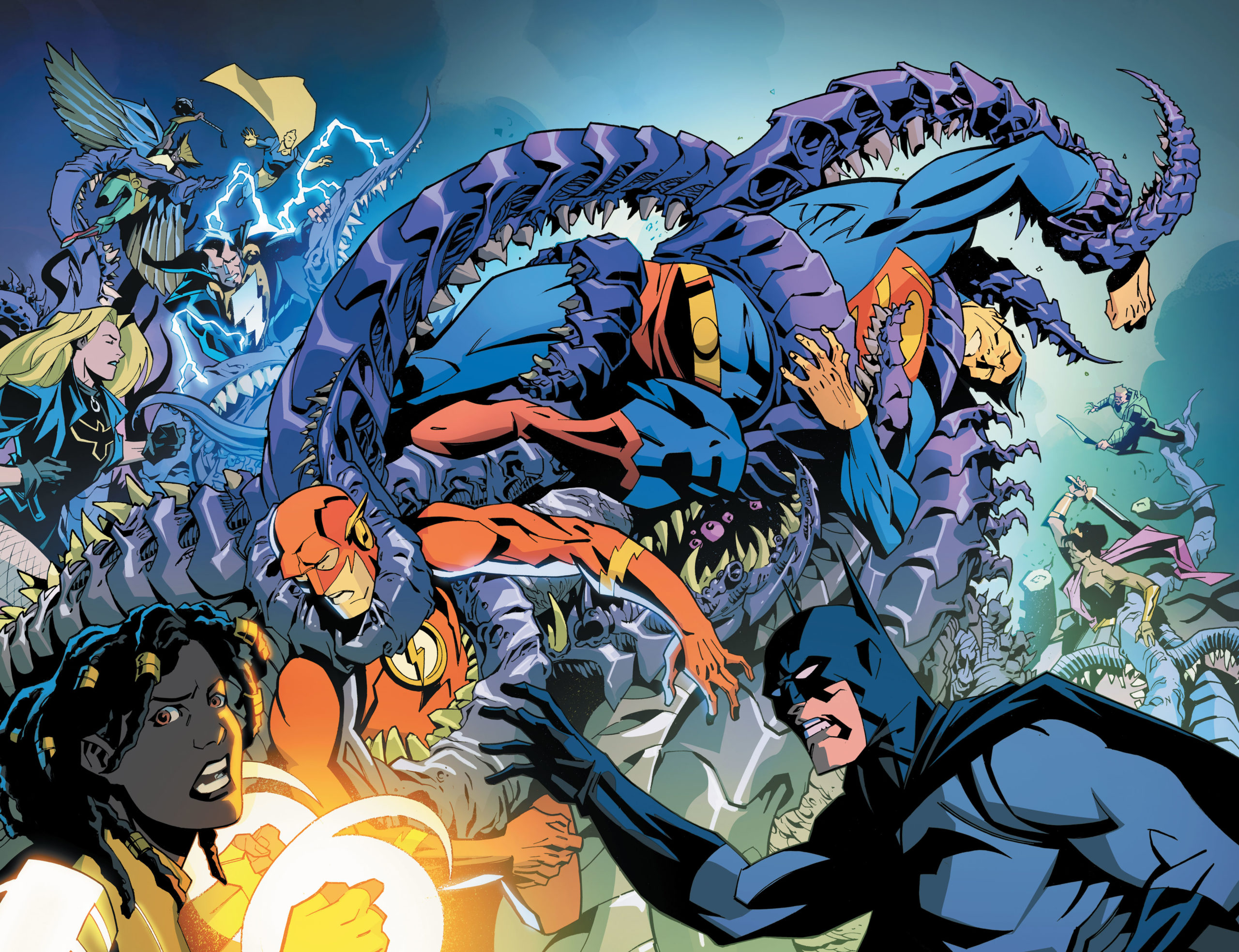 However, the JLD backup for Justice League #71 doesn’t directly deal with the fallout of the League’s confrontation with Merlin. Rather, it focuses on Doctor Fate, who’s writing a letter to his predecessor, Kent Nelson. Accordingly, Ram V finishes his tenure on the title in an incredibly oblique manner that doesn’t feel particularly satisfying. Granted, the aforementioned annual makes a helluva lot more sense now that readers are able to read the story in the order it was intended.

Nevertheless, I can’t help but feel that Ram V really got the short end of the stick. Frankly, his work on JLD has outshone Bendis’ meandering Justice League consistently week after week. Nevertheless, Ram V has been hamstrung by a form that really isn’t conducive to the story he was trying to tell. I hope that DC does everyone a favor and gives this terrific writer an actual book to finish his story. The Merlin arc is far from over and considering DC tipped its hand during Future State, readers are likely clamoring for a resolution to Ram’s fantastic arc.

At this point, no one should be surprised by my assessment of Justice League #71. This book has had a lot of issues for the past year or so. Bendis has been incredibly inconsistent in his storytelling, and Ram V’s work’s been stifled by its restrictions. This issue’s just another piece of evidence that the title desperately needs a creative overhaul. It was poorly plotted, and suffered from a bloated cast, and recycled ideas. However, there is a glimmer of hope for the coming months. Bendis has announced that his last few issues will feature a crossover with JLD and that Justice League #74 is supposed to be a double-sized extravaganza.  Let’s hope he sticks the landing.

Final Verdict: The book is nowhere near as good as a DC Comics flagship title deserves to be.