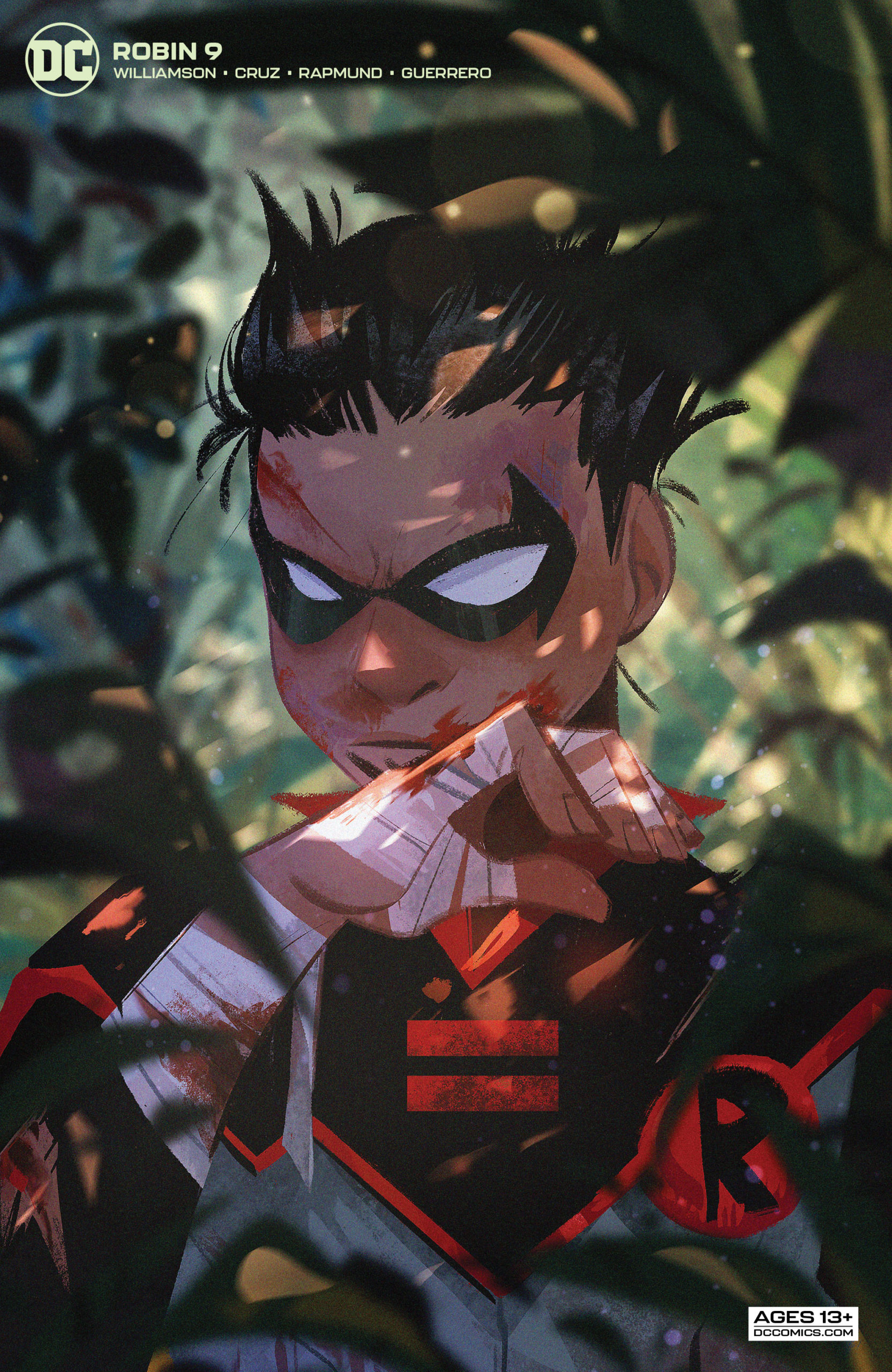 I was so excited to be able to read both Robin #9and Robin #10 at the same time. In issue #8, Damian had gotten himself in a situation that would be difficult to get out of under normal circumstances. Not even factoring in that you are on an island in the middle of nowhere with a crazed demon worshiper.

Or in this case… the hallucination. Joshua Williamson, how dare you remind me I have a heart, the strings of which you pull to their limits. That emotional punch in the gut was wholly unnecessary, and yet worked so well with the plotline. Williamson’s clearly been planning this since day one! Tell me otherwise.

Robin #9 has such a well-rounded plot and build-up to the climax of the issue. I’ll never get tired of the “Underdog” being able to give a rousing speech to rally the troops. With a little bit of help, Damian gets the new squad going, and oh my murder what a spectacular show. I adore that we can see how far Robin’s come as a character from his early days. Robin #9 has some defining character moments of the series for me. Take charge Damian, feels different than bossy Damian and that’s how you know you have a good writer.

Damian, go wash your mouth out

I keep forgetting that Damian must be about 14 now. In my head, he was still 10 and really annoying. Damian Wayne has come so far as a character and been through quite enough trauma, even before issue #10! Yet for some reason seeing Damian “swear” triggered something inside me to react like this; “AAAH! Damian. Language. Go wash your mouth out, you small child!” To be fair I think the only person I’m cool with swearing is Jason Todd. It just seems to fit his character more than anyone else.

Joshua Williamson’s clearly trying to help Damian out, with his little rebellious teenager phase. To be fair, he willingly ended up on Murder Island for crying out loud. I think Williamson has definitely proved that Damian is well into his angsty teen years. Robin #10 delves a little deeper into Mother Soul, her connection to The Demon, and to Damian. I know that we all have that one crazy person in the family, but, wow… Williamson’s gone all out with this one!

Swishy Magnificence Runs in the Family

When Mother Soul popped out of the green, the first thing I thought was “Huh, she’s hot”, which changed to “Ohhhh. She’s crazy.” Roger Cruz and Norm Rapmund have done a brilliant job with both Robin #9 and Robin #10. Damian looks young in some panels, where the angle of his face is different in others, making him look more mature. Cruz and Rapmund made these two issues their love letter to these characters. I love how the art style is so similar to what we know, yet there’s a slight shift so you can tell it’s someone else’s work.

Luis Guerrero. What can I say? You, sir, are truly outstanding. The color in both issues is spectacular. The shadowing in #10 was particularly noticeable. The vibrant color pallet of green and dark blues and black really made everything stand out more. I think the coloring might have to be my favorite part of these two issues. The writing is brilliant, as is the artwork, but the real stand out for me is Guerrero.

Never again will I ever be late to the party, as I missed so much. This was a sad occasion. Now I’m all caught up and even more excited than before. After such an action-packed couple of issues, the stakes for Joshua Williamson are high. However, with an ending like the one we get from Robin #10, I have no doubt we’re all in for an AWESOME tale to come.

Conspiracy theories are on their way!