Nightwing: Leaping Into The Light 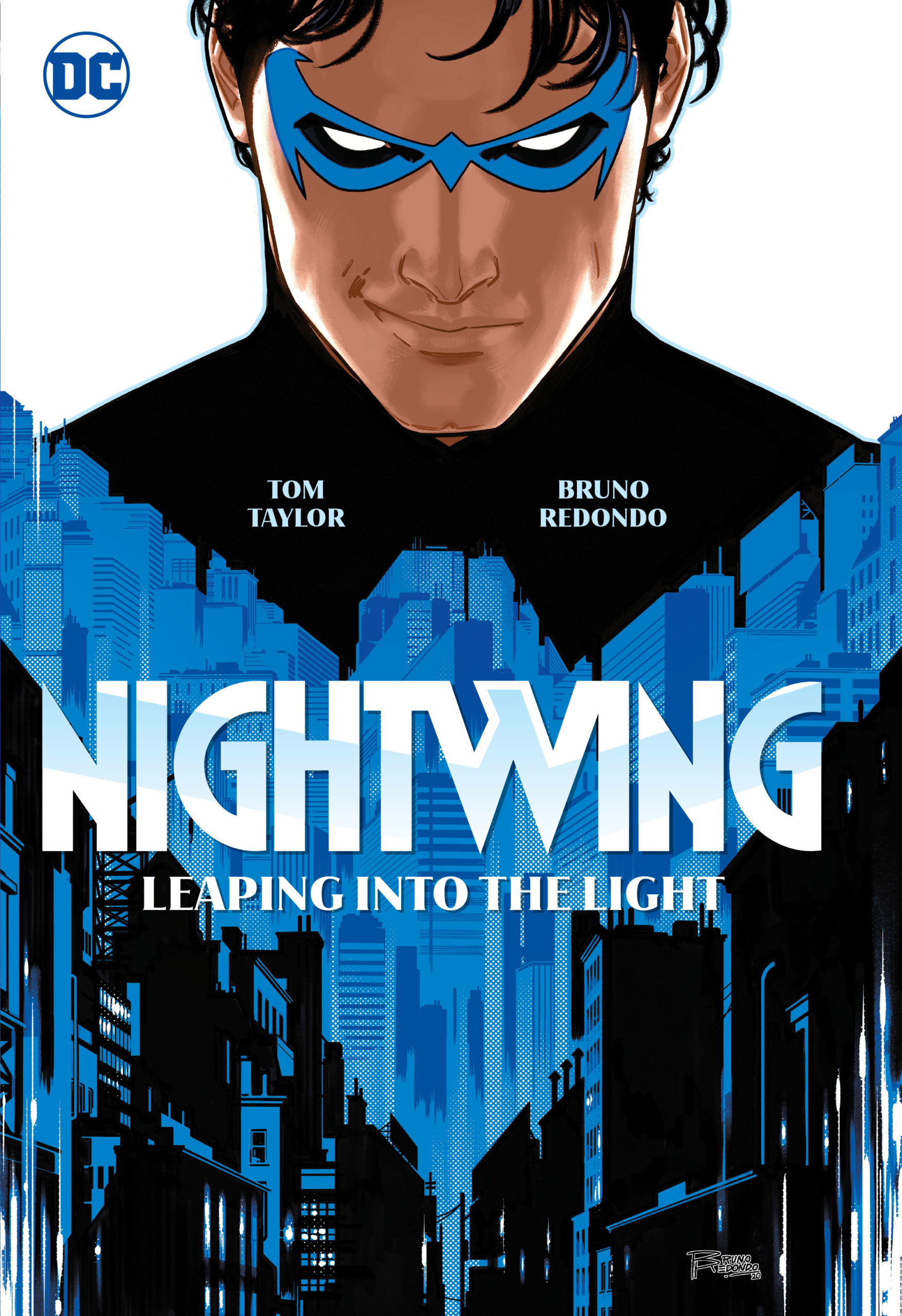 Nightwing: Leaping Into The Light is as close to a perfect comic as you’ll find, as it’s written by someone who loves Dick Grayson as much as his fans do. This beautiful hardcover collects issues #78-83 of the current Nightwing run, a gallery of the main and variant covers, and a selection of sketches and designs by artist, Bruno Redondo.

I’ve been a fan of this character my entire life; he was the first Robin, but he stepped out of Batman’s shadow to become Nightwing. He’s a hero to the core; a protector, a savior, and a guardian. He could easily be your best friend, and he’s definitely not someone you’d want as an enemy. Of course, everyone knows he’s been through a lot in recent years, and writer Tom Taylor is clearly aware of this. 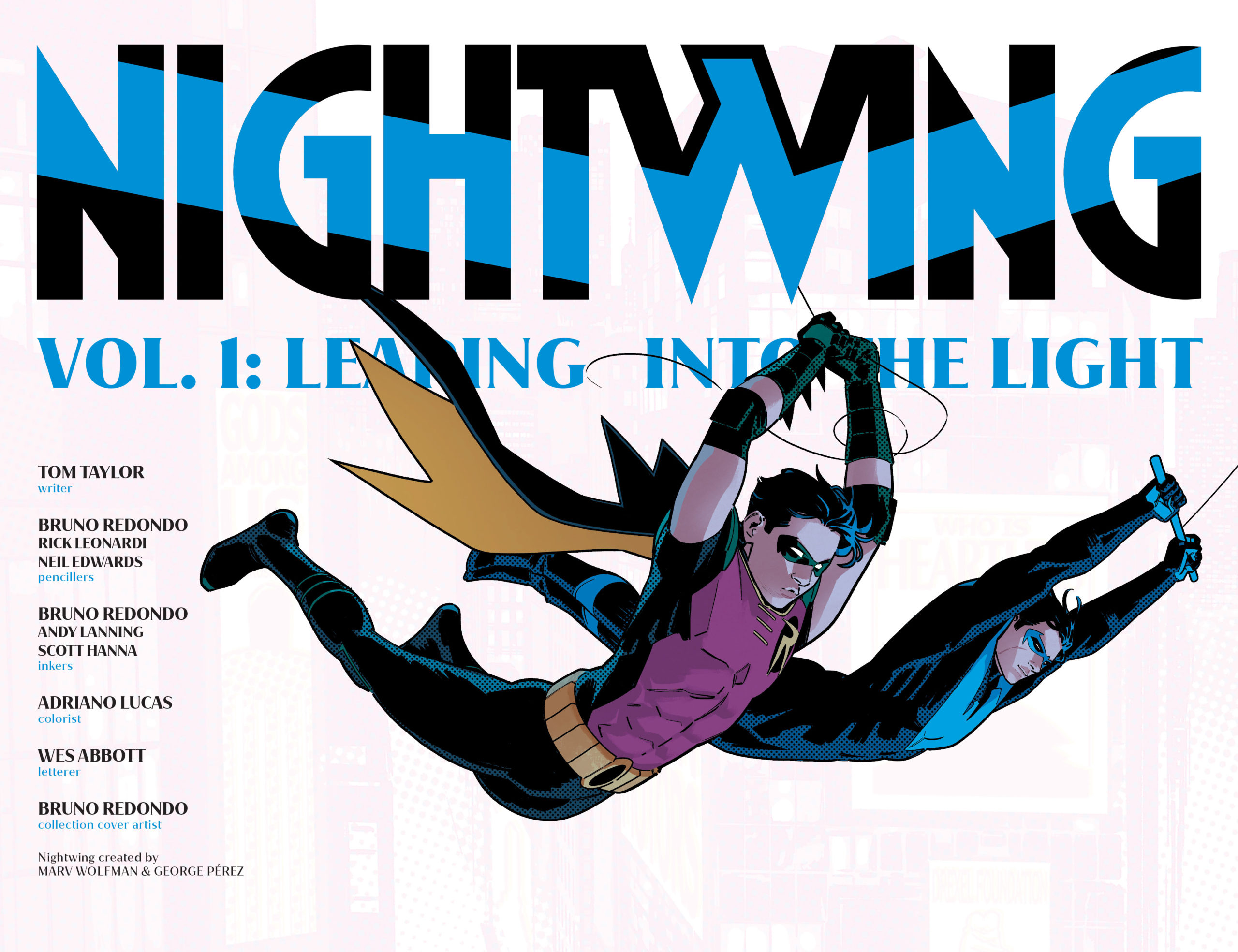 This story is a love letter, both to Nightwing and to his fans. Only Tom Taylor could have a hero who recently had his whole life taken away from him, and reduce that entire chain of events to a joke… while protecting a puppy. Dick Grayson hates bullies, and Blüdhaven’s full of them.

From the opening flashback scenes, featuring a glorious untold day in the lives of Dick Grayson and Barbara Gordon, the dialogue and characterization in this book is bang on the money. These are the characters I grew up with, these are the heroes I love, and they’re in very good hands. 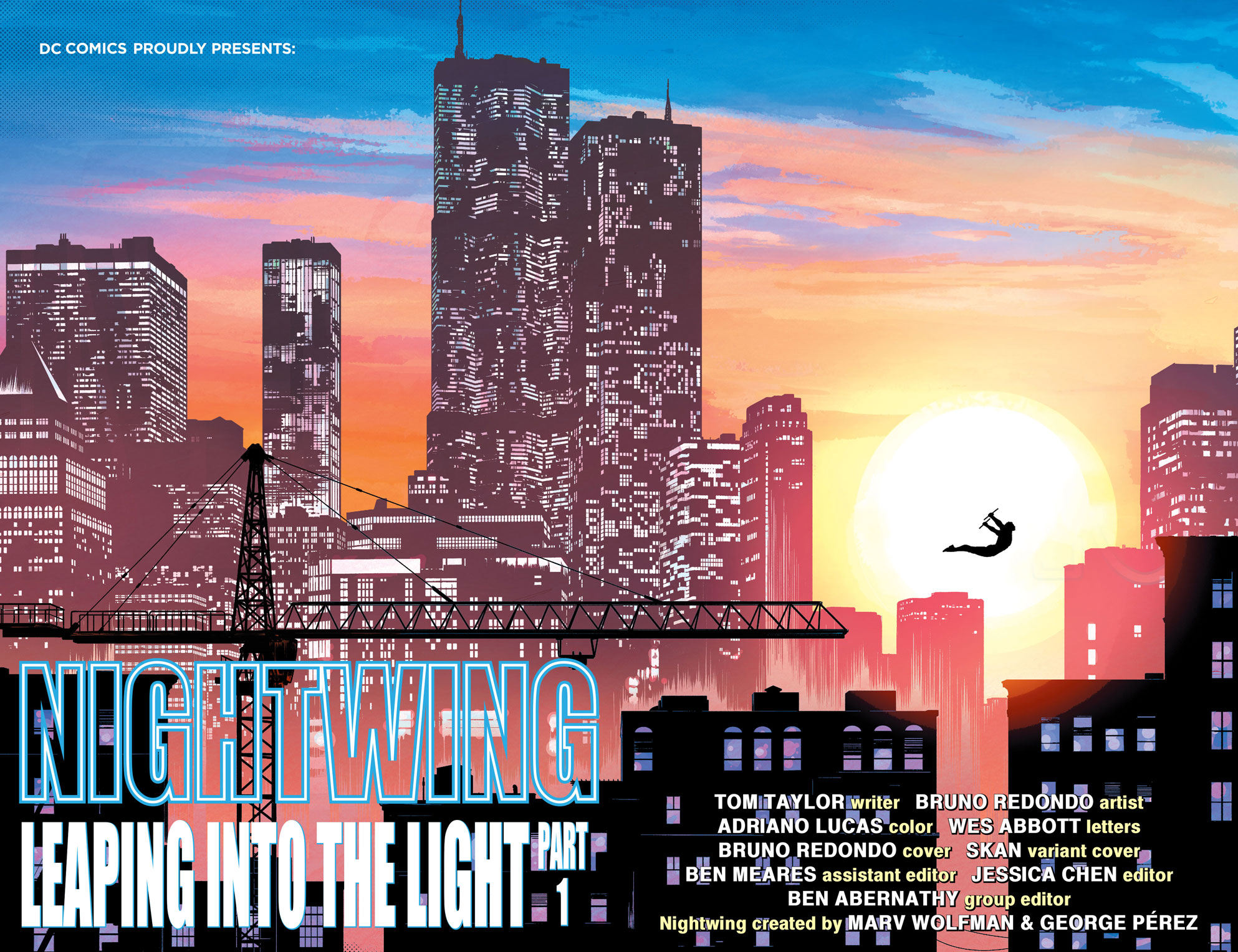 Leaping Into The Light

Bruno Redondo and Adriano Lucas are superstars. Look at this art! The skyline, the sunset, the action, the grapple hook that looks like a trapeze wire… come on! This stuff is awesome! Once you’ve read this collection I’m sure you’ll agree that this run will become one of the most loved in the character’s history.

Redondo draws an awesome Nightwing, a stellar Barbara Gordon, and his cityscapes are sublime. He’s as comfortable drawing a character sitting on a fire escape, as he is with scenes of pugilism and acrobatics. Lucas’ colors are bright, punchy and really make the line-art shine. Yes, I know that this world is supposed to be grim, and gritty, but Dick Grayson is a shining knight, not a dark one.

Leaping Off The Page

Bruno Redondo is an artist’s artist. This man blends a classic American comic-book style with Manga emotions, vintage European storytelling, and then he throws in some Ikea catalog chic for good measure. Yes, you read that right. This man’s layouts, pacing, paneling (or complete lack thereof), movement, body language, and facial expressions are simply A+, outstanding, 10/10 gorgeous.

Every artist who contributed to this wonderful issue deserves praise and respect. Mr. Redondo, for the parts of the story that are set in the present, and the great Rick Leonardi, Neil Edwards, Andy Lanning, and Scott Hanna, for some of the best flashback scenes I’ve ever read… or even seen.

This book will have you in tears, and rolling with laughter. Seeing Dick and Barbara going out for pizza to Marv and George’s made me so happy. Long-standing fans will get a kick out of this, and new readers just need to add the surnames, Wolfman and Perez, to those first names in order to share in the smiles, and receive a healthy slice of nostalgia to go with their pizza. The fact that Mr. Perez also seems to be the one handing out the tasty treats – just like he’s delivered thousands of beautiful comic pages in the past – made this aging fanboy grin like the Joker on nitrous oxide.

I love Dick Grayson, Barbara Gordon, and Tim Drake… and I always have, but Tom Taylor’s reminding me exactly why. The way these people speak, act, move and interact with each other is so real, and so heart-warming, that they feel like friends relatives, and people we know. Yes, we still get action, spandex, and superpowers, but this title has those as magical extras, not as the main focus.

Adriano Lucas. Wow! It’s no secret that color artists are often grossly underappreciated, but if there’s one comic that proves how essential they are, and how much they actually contribute, then Nightwing is it. I must have seen hundreds of flashback sequences in comic books over the last five decades; sepia-tinted, painted, washed out, faded, even some that were virtually indistinguishable from the scenes set in the present. The ones in this collection are perfect! Check out chapter five of this book to see what I’m gushing about.

I don’t care if you hate me, but Wes Abbott is every bit as awesome as everyone else working on this series. Lettering, like movie music, is frequently deemed as most successful when it doesn’t stand out and just enhances the visuals. Wes’ work does all of this, but dammit it stands out too… and it deserves to. From Haley barking to the inevitable sounds of violence, the lettering in this collection is simply ace.

I don’t really know what else to say, except that every member of this creative deserves a Knighthood, medals, accolades, and free food for life. Nothing on this Earth is perfect, but Nightwing: Leaping Into The Light comes pretty darned close. This is definitely a comic for people who already love them but it’s also a tale that will make brand new fans.

If you haven’t read this series before, now’s the time. Pick this book up, you won’t regret it. Nightwing is the best superhero comic on the shelves right now, and this collection is the perfect place to find out why.

Images and Digital Review Copy Courtesy of DC Entertainment. This book can be purchased from Penguin Random House, Amazon, and all good book-sellers. ISBN: 978-1-77951-278-9