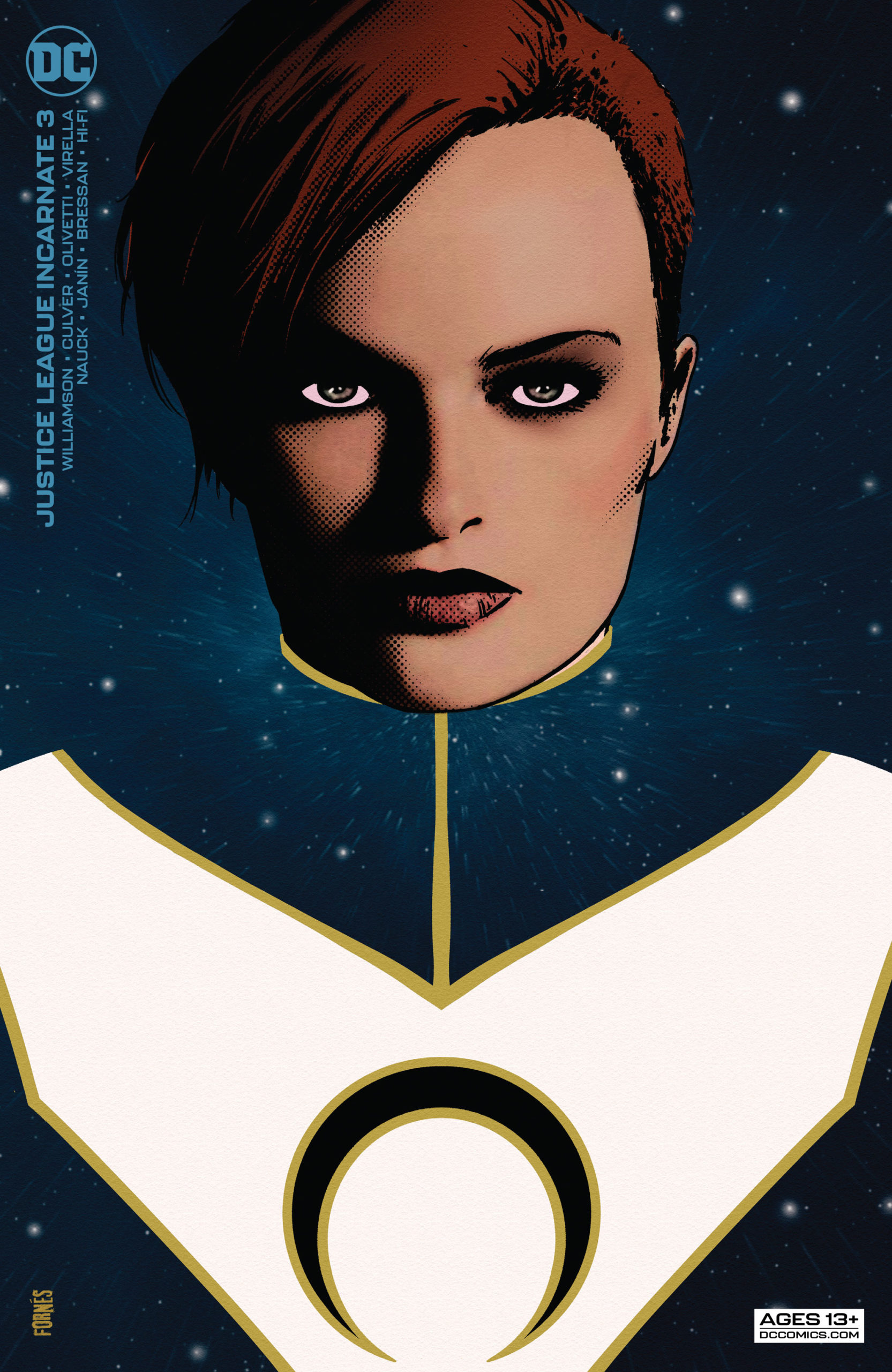 Dispursed across the Multiverse, the League uncovers the source of the crack in reality, in this month’s jaw-dropping Justice League Incarnate #3.

The Multiverse is damaged, and a “great darkness is coming”. Darkseid is on the move and the Justice League Incarnate has been scattered across the Multiverse while in hot pursuit. Those who stayed behind to man the House of Heroes were attacked by Grail and Kailbak. After the pandimensional satellite crashed from the assault, Mary Marvel, Dinocop, Aquawoman, Thunderer, and Orion find themselves trapped on an unknown Earth where they encounter the source of the crack – a horror that threatens all reality. 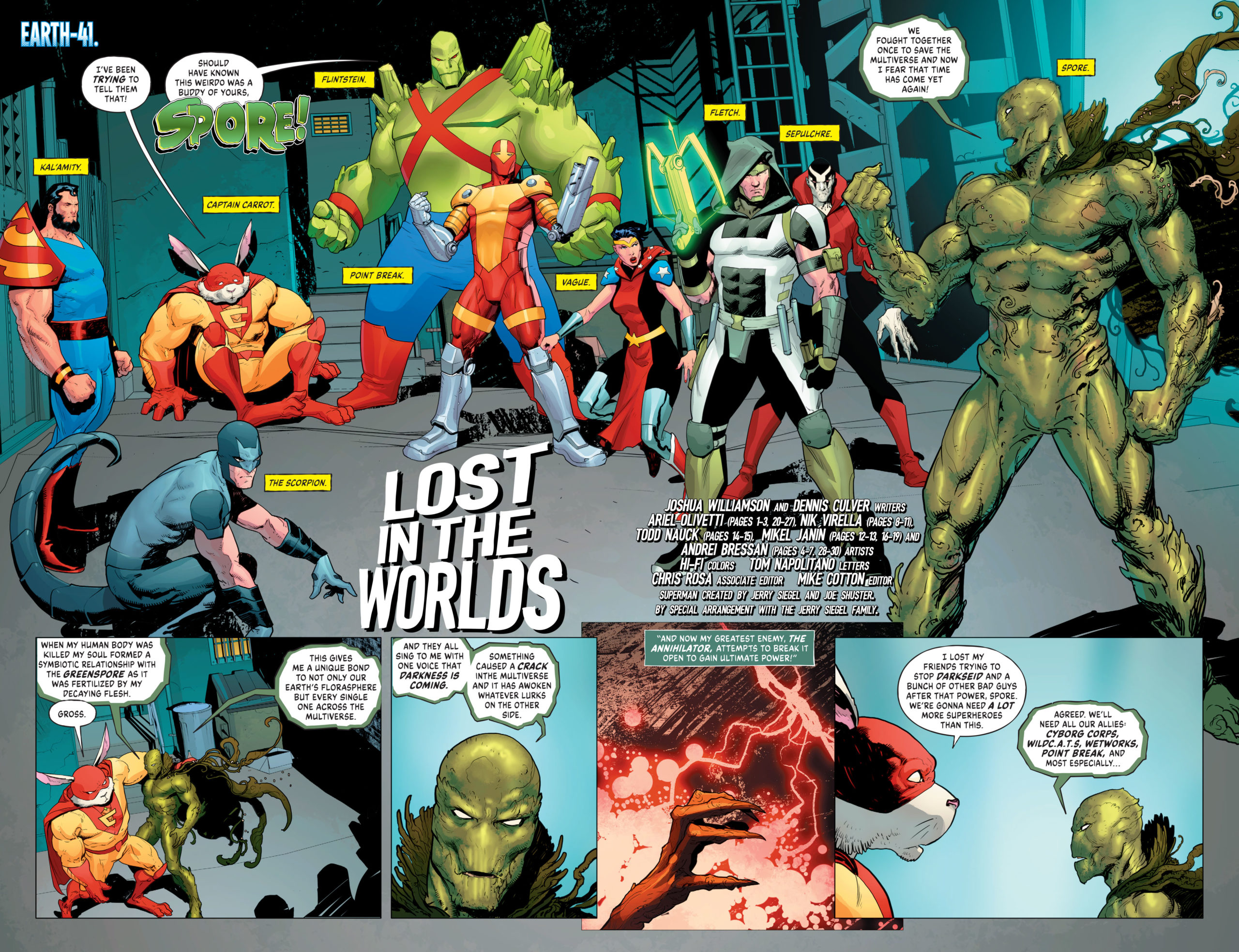 The last two pages of this issue blew my mind. Joshua Williamson pretty much told readers in Infinite Frontier #6 that his story was going to be huge. Hell – he reintroduced Pariah and the pre-Crisis on Infinite Earths Multiverse as a threat. Somehow with Justice League Incarnate #3, this story just got even bigger. Williamson and Culver have reintroduced another threat from DC’s past that our heroes have to confront. The nutty thing is that this is only Act two!

Williamson has planned a three-part story, starting with Infinite Frontier, followed by Justice League Incarnate, and an as-yet-unnamed upcoming future project. One of the fun things about this three-act epic is that DC has pretty much given the writer the entire toy box to play with. Seriously, this issue has over forty different characters in it, some of whom were already established, while others have been created by Williamson and Culver.

Some of these characters are major power-house villains who have had their own event titles, such as Darkseid and Nekron. My point – the scope of this book is beyond massive. I honestly can’t believe I’m saying this, but this trilogy is larger than any of DC’s previous events. A feat that I didn’t think was possible.

On a completely different note, there’s a wonderful portion of the issue that’s set on Earth-33, which apparently is “our world”, where Williamson and Culver once again have some fun breaking the fourth wall. While I don’t want to give away any spoilers, I will say this – the Earth-33 portion of the issue gently pokes fun directly at DC Comics. Also – the two writers flesh out the cosmology of Earth-33 that helps explain why it’s unique within the multiverse. Overall, I found this to be quite charming and clever, but hey – I’m a sucker for metafiction.

There are five artists who are on the credits for this issue. Five. That’s a lot. I think I’ve said this a thousand times, but I’ll say it again. A shift in art styles is distracting and can break a reader’s suspension of disbelief. However, I actually like what they did for this issue. There are five different Earths featured, and conveniently enough, each artist was assigned a different one. Accordingly, each world has its own aesthetic, so has characters hop from universe to universe, they look different.

This alignment of form and content works really well in a book like this. Probably my favorite use of this trick is on Earth-26, which is home to the Zoo Crew. This version is literally a cartoon, and when Justice League members come to this Earth, they acknowledge that they have become cartoons. It’s fun watching the emotionally tortured Flashpoint Batman interact with the likes of Yankee Poodle and Feline Faust. The dissonance is hysterical.

Justice League Incarnate #3 is a blast. There are some absolutely golden moments in this issue that only get a page or two due to the sheer scope and breakneck pace of the narrative. I could read an entire limited series where Flashpoint Batman’s stuck on Earth-26, trying to navigate life as a Zoo Crew member. Alas, the story must go on. Artistically, the book is fun. DC chose the right artists for the job – each unique in style.  The issue looks and feels like a mini The Multiversity, where each Earth got its own issue and artist.

Overall, I have to say that I’m impressed. Infinite Frontier had me worried that Williamson was simply going to rehash previous Crisis storylines, and while that is true to a certain extent, his brilliant imagination has managed to craft a story that feels unique, despite relying on 80+ years of continuity. He’s impressively tied a lot of massive storylines together, making this series feel ginormous.