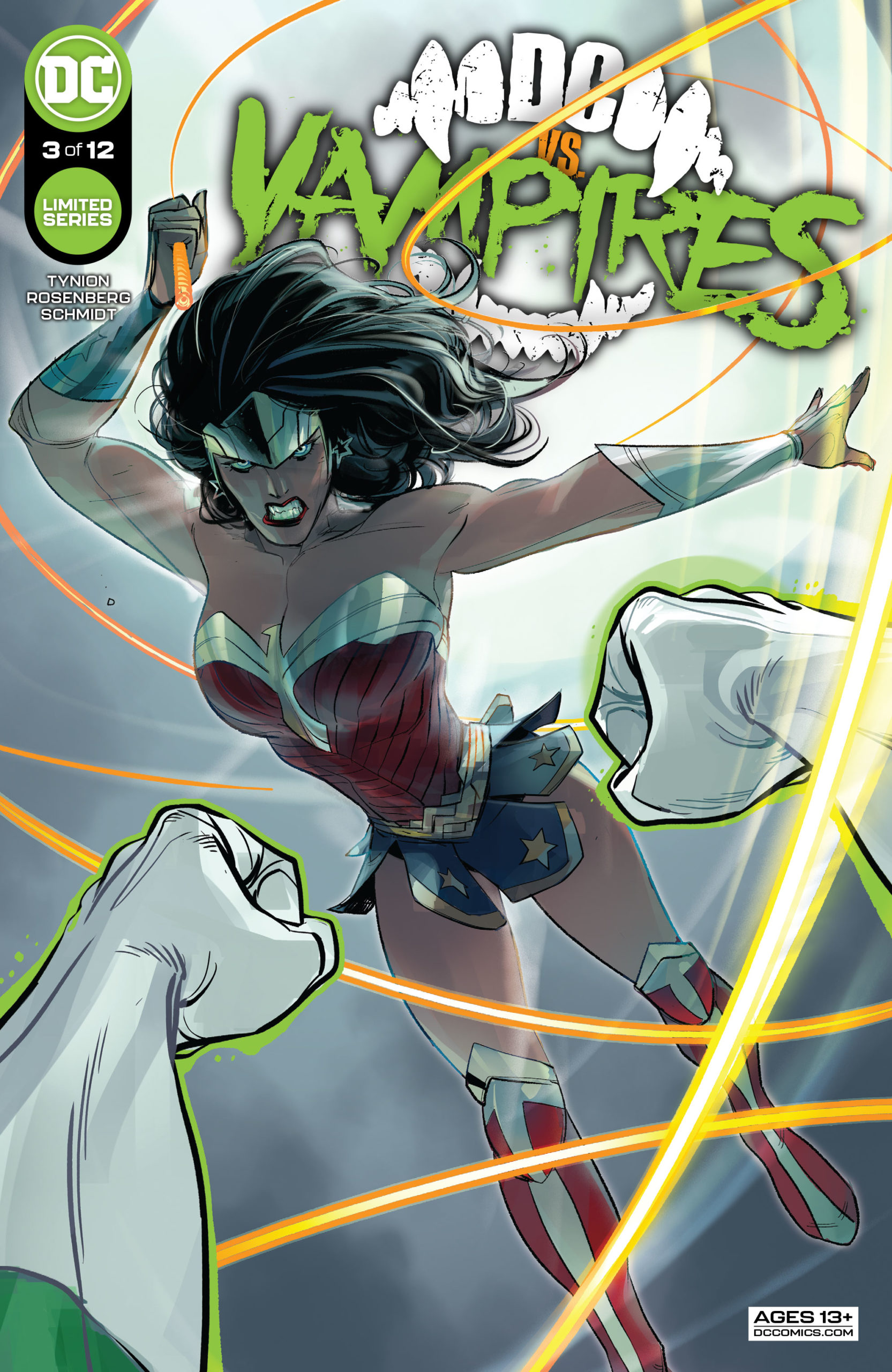 In DC Vs. Vampires #3, the blood-suckers are hunting on the streets of Gotham City as the coming undead horde makes its first move. Batman’s investigation into the disappearance of Andrew Bennett takes him into the sewers beneath the Hall of Justice, where he makes a stunning discovery! And the fall of another hero means the war for Earth has begun!

This third installment builds on the revelation from issue #1 that one of the League’s most powerful members is a vampire. Given that we’re now in the third chapter, it should be no shocker that Hal Jordan is part of the Vampire league and has “offed” Zan from the Wonder Twins as well as the Flash. No more spoilers, as James Tynion has really done a number on Green Lantern as his latest “turn to the blood side” is inexcusable and arguably sets up an apocalyptic nightmare.

Tynion and Matthew Rosenberg have mapped this out a-la Tom Taylor’s DCeased, but Green Arrow and Black Canary seem to be the aces in the hole. While all clues point to a clear Barman framing, Oliver’s smart enough to conduct his own investigation. Here’s hoping the Bat and the Arrow combine their efforts.

Batman (always written at his finest by Tynion) is on the verge of solving Hal’s part in this Vampire saga fairly early, but this is no Saturday morning Super Friends cartoons from the 1970s. Tynion gives the Wonder Twins (sans Zan) a real feature here… I like the mature look for Jana and not the “Whiz, Boom Pow” we were introduced to with these heroes from long ago.

Black Canary and Damien’s exchange sets the stage for her being at the forefront too, as her fighting skills and comedic one-liners arguably are the best things about this comic.

Sigh… Zatanna. If we ever needed a hero right now that can face the Dark. I’m not saying any more. Read this comic.

Otto Schmidt draws sharp character images; his Penguin renditions are to die for and his female characterizations are really super strong! I’m an advocate that this book would have been better under a darker DC label, but it’s beginning to ramp up really well!

The premise is great and I still believe that this is going to be a strong 12 issue run, as DC Vs. Vampires #3 sets up the beginning of a clear league of Super Vampires being assembled. This is a  good vampire story, though, as Matthew Rosenberg, James Tynion IV, and Otto Schmidt are crafting a great tale.

Give this series a try!