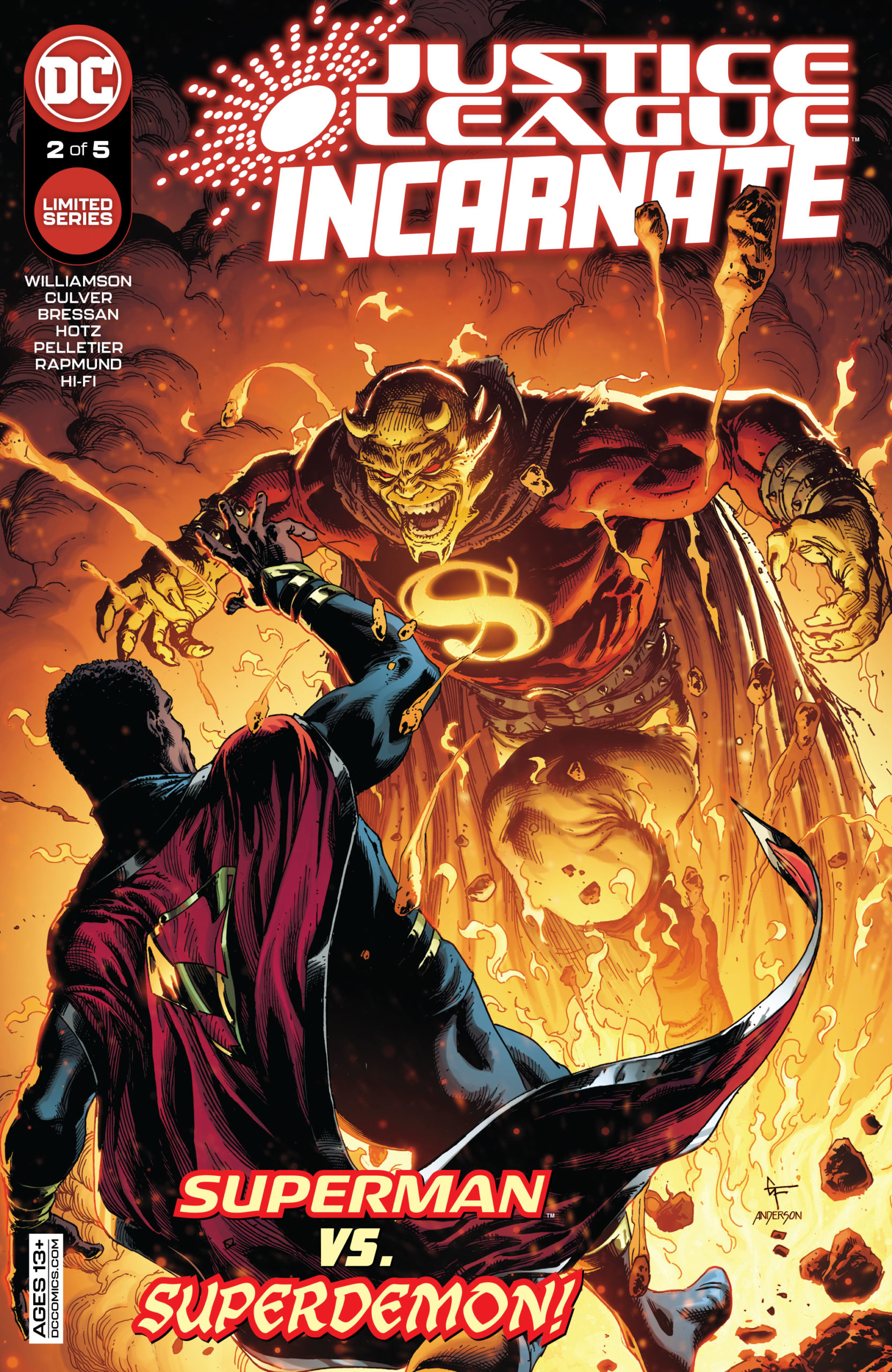 Darkness abounds, as President Superman and his Multiversal Justice League traverse the gothic realm of Earth-13 in this week’s Justice League Incarnate #2.

Last month, all hell broke loose when Darkseid and Tartarus (DC’s Thanos analog) began to duke it out on Earth-8. When the Justice League Incarnate intervened, they were greeted by a new ally, Doctor Multiverse (DC’s female Doctor Strange?), whose multiversal powers allowed the League to pursue Darkseid when he Boom Tubed away. However, it becomes apparent in the opening pages that Doctor Multiverse should probably consider mystical malpractice insurance, as the team lands on Earth-13.

For those of you who don’t have an encyclopedic knowledge of DC’s multiverse, Earth-13 is DC’s gothic world. Here everything goes bump in the night, including the Earth’s Justice League analog: The League of Shadows. Led by Superdemon (Earth-13’s Etrigan), the League of Shadows offer their assistance in the battle against Darkseid.

Meanwhile, the rest of the Justice League Incarnate is fighting off an invasion of Parademons led by Grail and Kalibak, as the villains and their army try to take control of the Harbinger.

This issue is a lot. Reading it kinda feels like drinking from a fire hydrant, as there’s so much to keep track of. For starters, the cast are all variants, doppelgangers, and analogs of both DC and non-DC IPs. Plus the plot moves at a breakneck pace, as Williamson and Culver have only five issues to tell their tale.

In many ways, this issue reminds me of some of those Bronze Age Multiverse stories from the 70s and 80s. Back before the rise of the trade paperback, comic book storytelling was far more decompressed. Plots moved at an incredibly fast pace, and the assumption was that readers would either be long-time readers who knew the characters and storylines or new readers who’d have to roll with the punches. Similarly, unless you’re up-to-date on about some 35+ years of storytelling, Justice League Incarnate #2 might seem impenetrable.

That said – The multiversal madness inherent within this title isn’t for newcomers; it’s for the enfranchised. If you’re familiar with DC continuity and/or really good with rolling with the punches, this book is worth your time. By having their heroes visit various different Earths in the Multiverse, Williamson and Culver are fleshing out ideas and concepts that were seeded ages ago in Grant Morrison’s The Multiversity, and it’s a lot of fun watching their collective imaginations run wild in the unexplored corners of the DC Omniverse.

A Lot of Chefs in the Kitchen

If you’ve spent any time reading my reviews, you know that I have some fairly strong opinions about multiple artists working on a single issue. I’m of the camp that a single issue should have a single artist and that a single story arc should also only have a single artist. Simply reading the credits, you’ll notice that there are four different artists drawing and inking this issue. Normally, this would be the moment that I would go on a rant about aesthetic unity and suspension of disbelief; however, I actually don’t mind the variation too much for this specific issue. Each artist was assigned a different setting, so when the setting shifts so does the style. Therefore, Justice League Incarnate #2 feels a lot less jarring than one would expect.

The biggest aesthetic jump occurs when the story cuts to Earth-13. Kyle Holtz drew these pages, visually leaning into Earth-13’s gothic tone and mood. Frankly, he knocks it out of the park. Everyone else does a perfectly serviceable job too, so I guess if DC is forced to hire multiple artists for one issue, I guess this is a least a palatable method to do so.

This issue was a creative whirlwind. Aesthetically, it’s all over the place, and the plot moves faster than Impulse on Red Bull. Nevertheless, it’s still a lot of fun. While I might be projecting here, I have a strange suspicion that growing up neither Williamson nor Culver were ever gifted the main version of a hero’s action figure. Instead of getting the Spider-Man action figure that was on their Christmas list, they probably ended up getting mutant Spider-Man or Iron-Spider (I mean… they’re all the same right?) Therefore, each had to use their imagination to tell their stories using random, B-list doppelgangers. Honestly, it probably made them better writers because Justice League Incarnate #2 feels like a fun, child-like romp through the Multiverse.

Final Verdict: You might need to crack out a pencil and paper to take notes, but overall it’ll be worth it.