“The Worlds Outside Your Window” 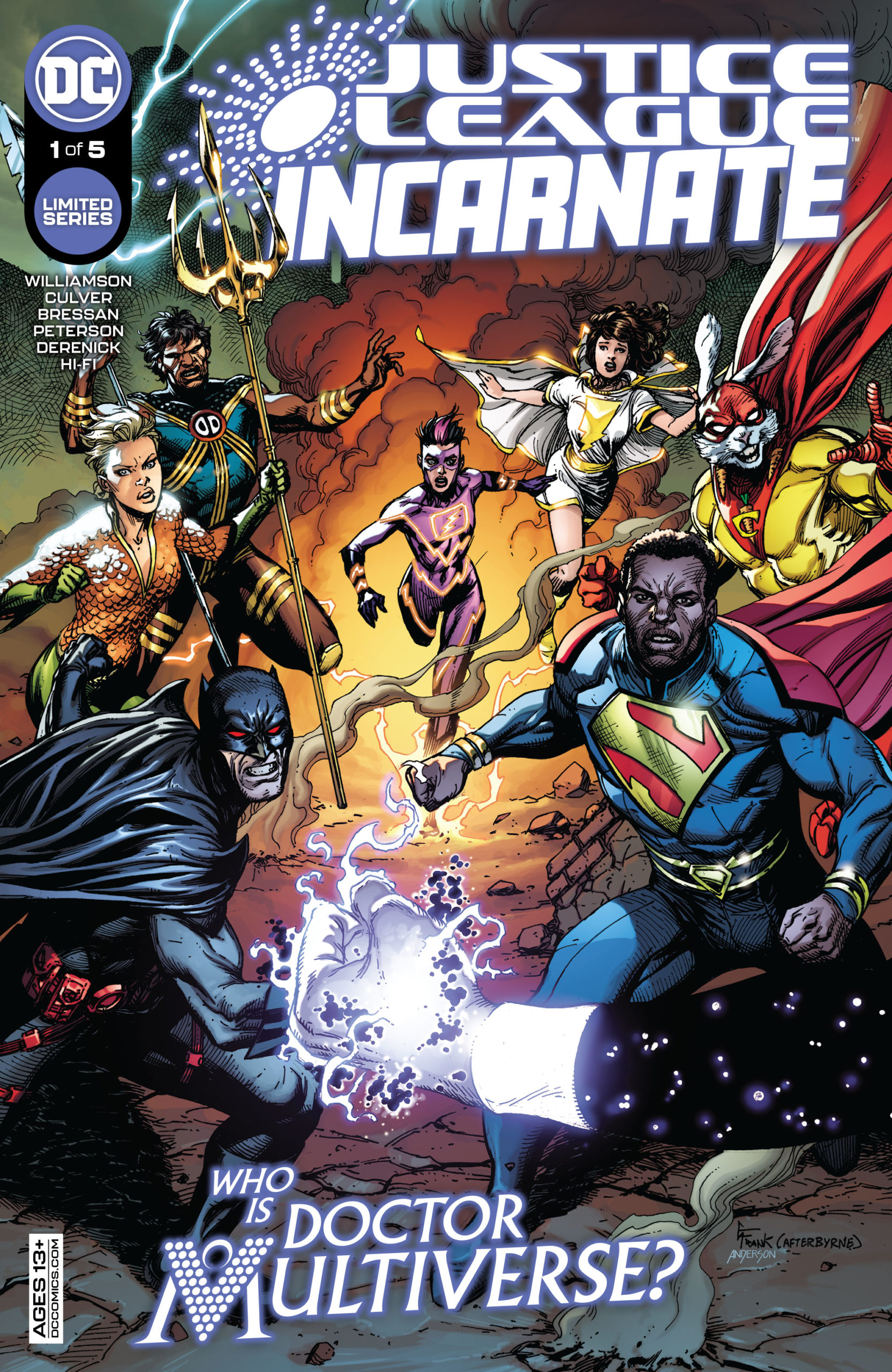 Trouble brews for the Aven… I mean Retaliators, as Than… I mean Tartarus lays siege to Earth-8 in this week’s Justice League Incarnate #1.

Following on the heels of Infinite Frontier, Joshua Williamson picks up exactly where he left off, as the newly renamed Justice League Incarnate attempts to thwart Darkseid while tackling other multiversal threats. The first issue focuses on Earth-8 which, for those of you who don’t have an encyclopedic knowledge of DC’s local multiverse, is home to DC’s Marvel analogs. 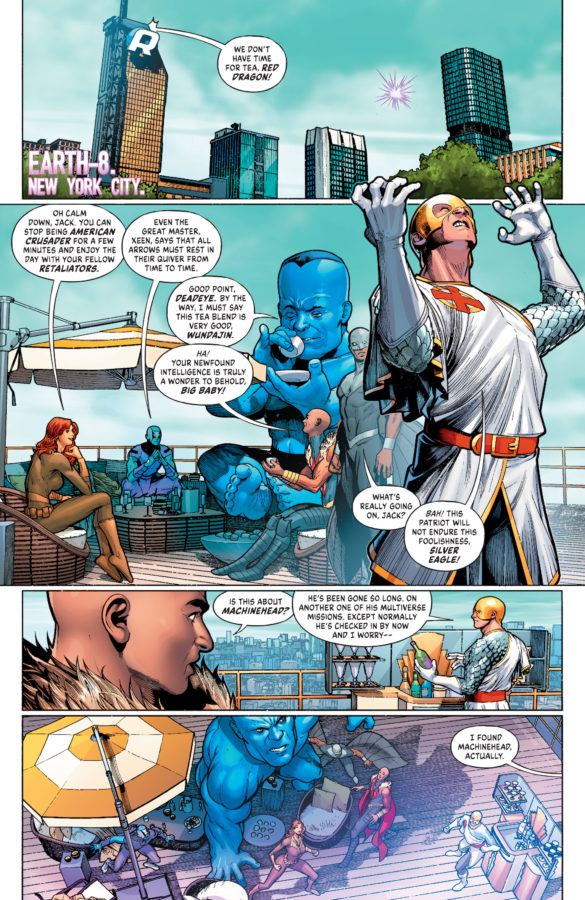 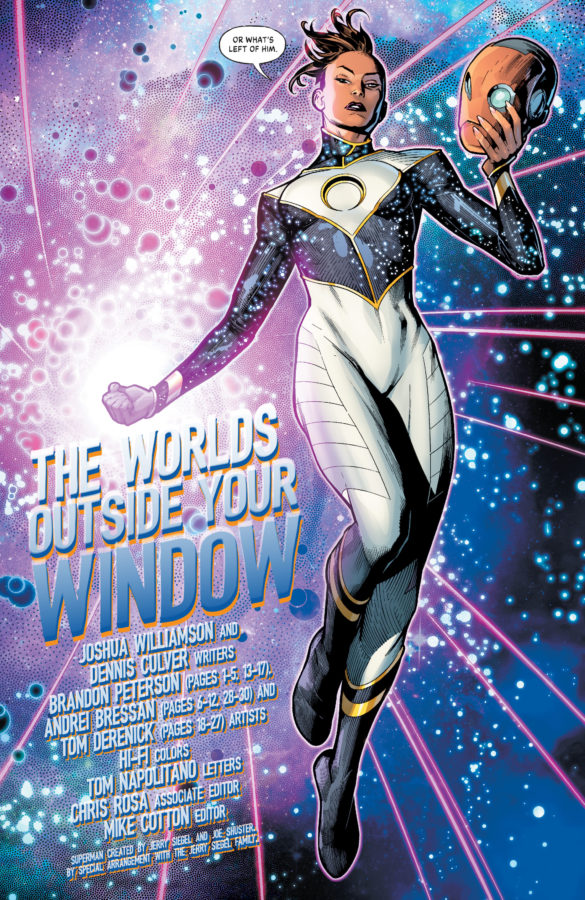 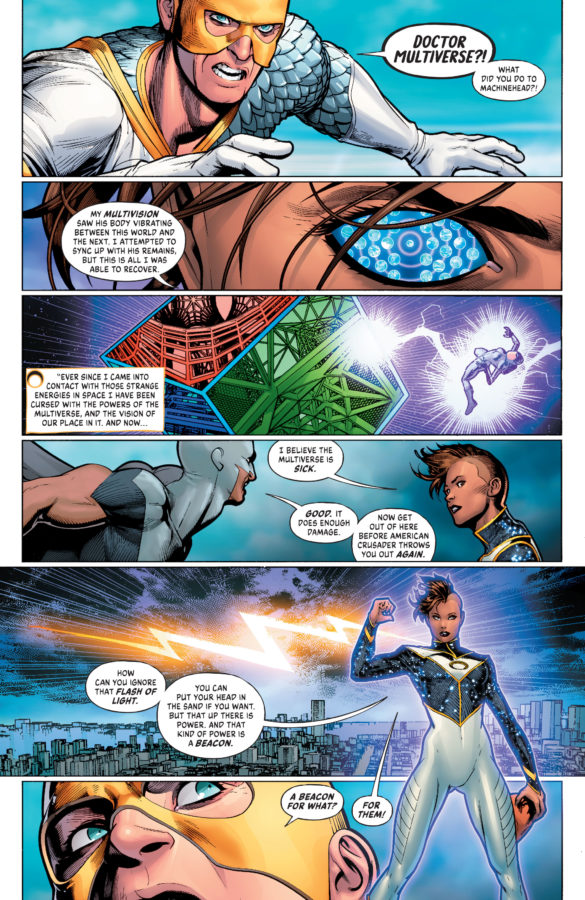 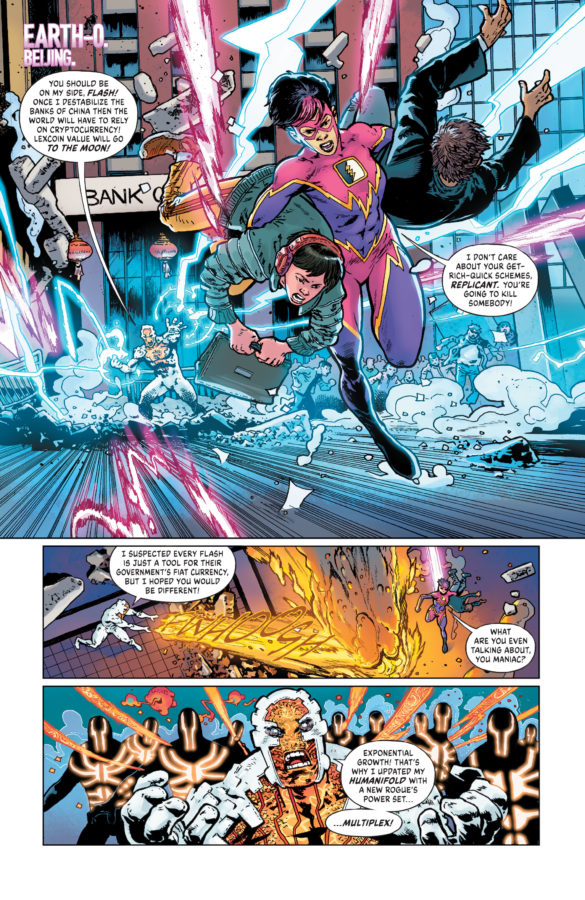 Page one opens with the Retailiators enjoying a nice cup of tea, while their leader, American Crusader, frets over the fate of Machinehead (For those of you who don’t know, Machinehead was the member of Justice Incarnate who betrayed the team by joining Darkseid in Infinite Frontier #4). Moments later, a new character named Doctor Multiverse appears, who seems to be a female version of Doctor Strange (maybe?) Anyway, she arrives holding Machinehead’s helmet and announces that the Multiverse is sick. That’s when the sky rips open, Tartarus arrives with an alien army prepared for what he refers to as “The Eternity Quest”. Essentially, a battle for Earth-8 begins.

Poking Fun at the Competition

I love Earth-8. Seriously, it’s one of my favorite places within the DC Multiverse. It’s fun to see DC tackle Marvel’s characters, and it’s particularly delightful in Justice League Incarnate #1. Joshua Williamson and his new copilot, Denis Culver, do a great job poking fun at Marvel’s icons. The American Crusader’s dialogue reads like a caricature of Captain America, and Big Baby’s newly found intelligence is a cute nod to Endgame’s Professor Hulk. 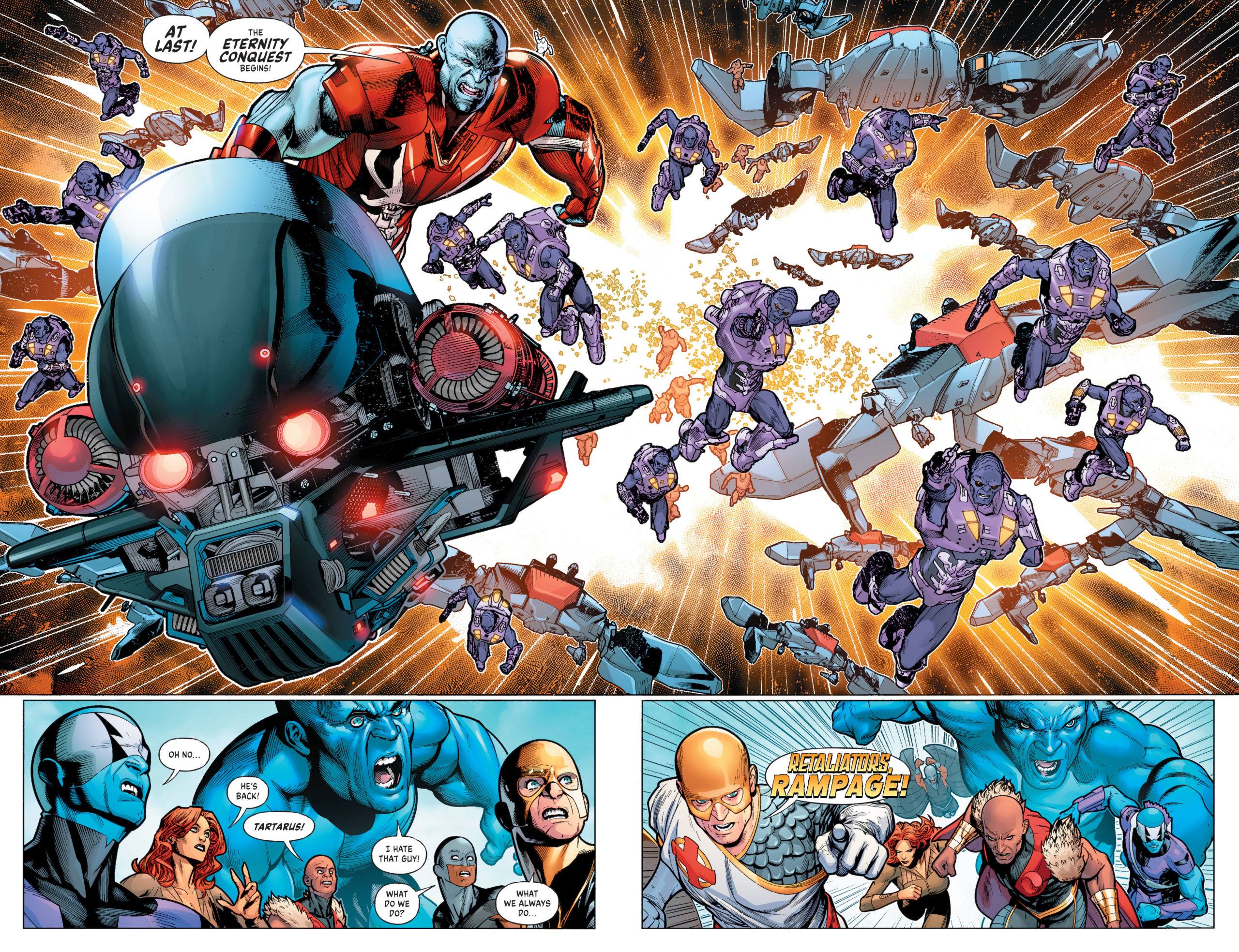 I’m not going to lie, it’s fun watching these Marvel-esque characters get their collective clocks cleaned, and it gets even better when the titular heroes have to swoop in and save the day. Call me petty, but as a long-time DC fan, it’s nice to see DC stick up for themselves in light of Marvel’s, or more specifically, the MCU’s massive success. Before anyone gets huffy and decides to dox me or something, I want to put it on the record that I have really enjoyed Marvel’s output as of late, but my heart will always belong to DC.

Artistically, Justice League Incarnate #1 delivers what you’d expect from a DC comic. The issue’s aesthetic is tight, sleek, and idealized: par for the course when it comes to DC’s house style. What’s truly impressive is the fact that three different artists drew this book: Brandon Peterson, Andrei Bressan, and Tom Derenick. The trio did a fantastic job maintaining a stylistic continuity. While each artist was credited for different sections of the book, I could barely tell visually. It wasn’t until I double-checked the credits that I realized that the team had divvied up the issue into sections. Usually, I gripe about having multiple artists on a book, as the transition in styles usually distracts from the story. However,  the artistic team for Justice League Incarnate #1 – including the people over at Hi-Fi who greatly added to the issue’s visual continuity -managed to escape that pitfall. 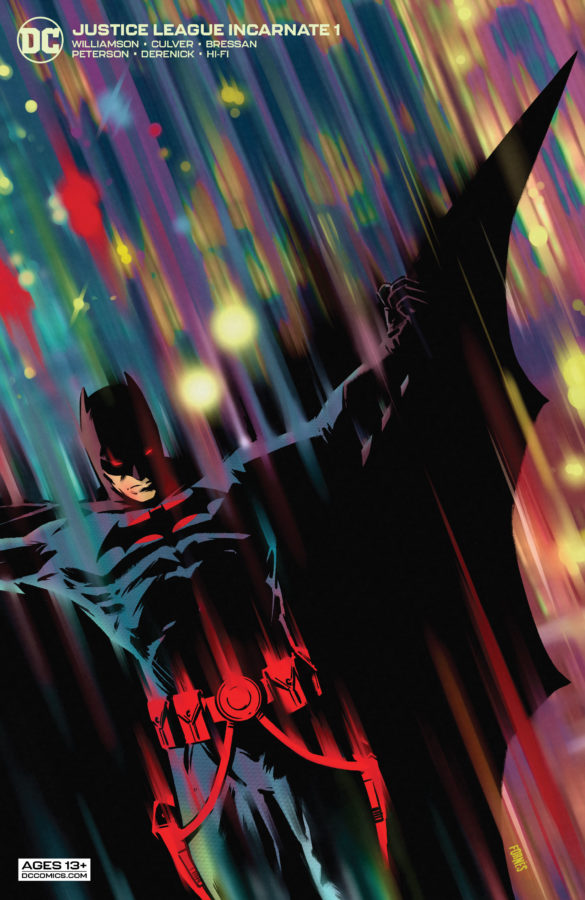 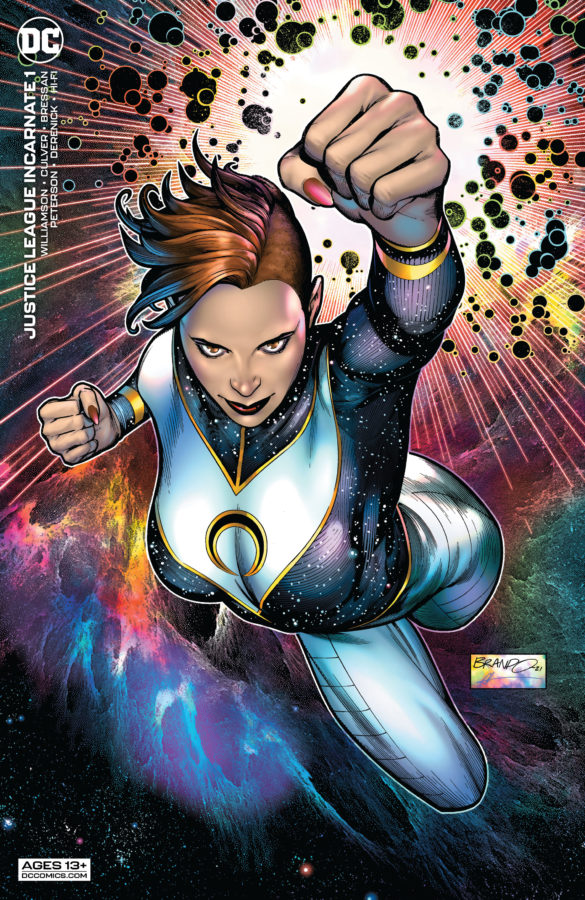 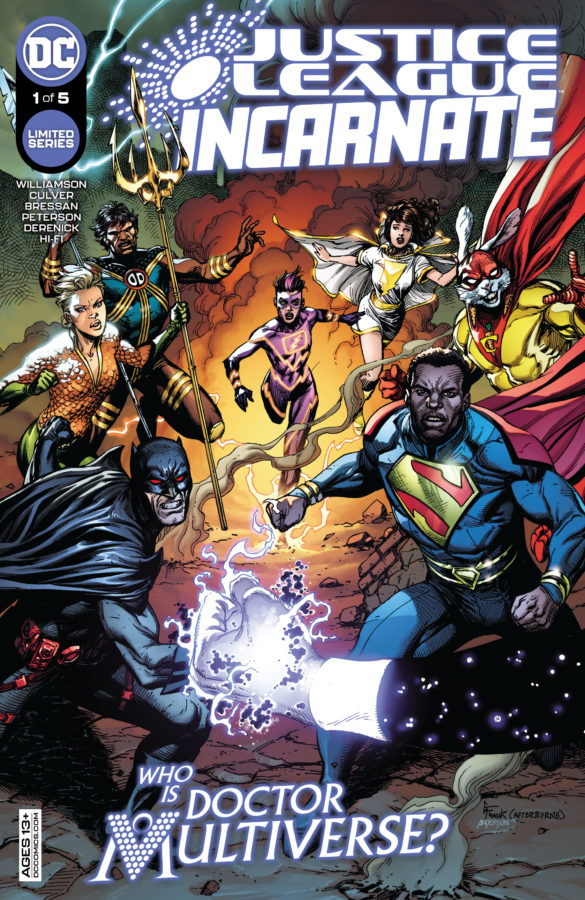 This debut issue marks the beginning of what will undoubtedly end up giving us a fun, Multiversal romp. Williamson and Culver’s script is fun and exciting, and it ends with a pretty gnarly cliffhanger. While the art is by no means the most original or groundbreaking work ever published, it’s good, which is about all one can expect for a book that features three different pencilers. Overall, the title is pretty solid.

Final Verdict: I’m all in.