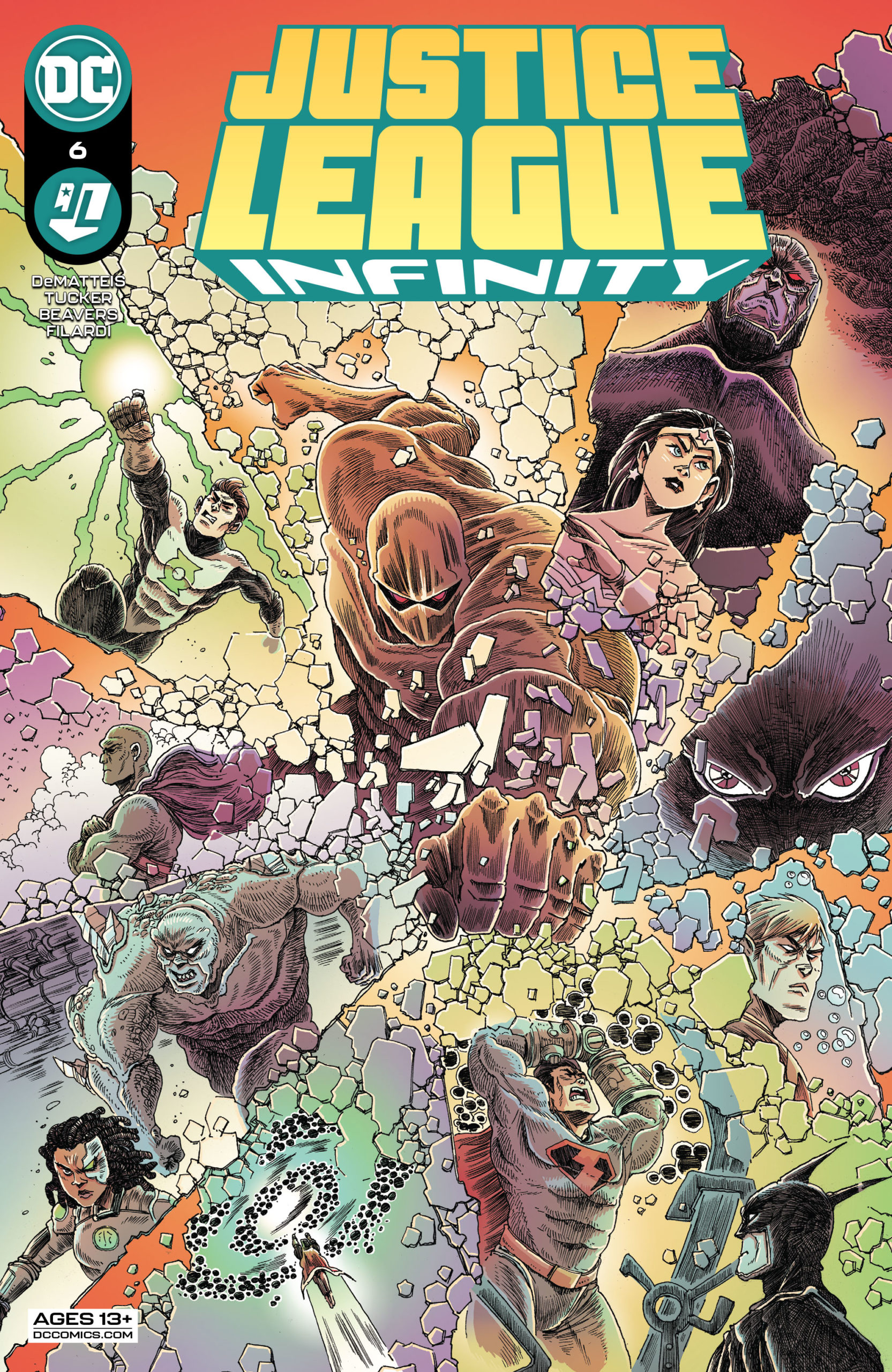 The mirror shatters, as our heroes discover the source of the multiversal madness, in this week’s Justice League Infinity #6.

Having been stranded on different Earths in the Multiverse, the DCAU Superman and Wonder Woman joined forces with the Justice Alliance of Earth-D (an Earth similar to Earth-23 which features minority doppelganger heroes). Together they ventured into the Mirrored Room: the DCAU Multiverse’s equivalent of the Bleed. In this space between realities, they find the rest of the DCAU Justice League floating unconscious. When the unconscious heroes awake, Green Lantern explains what happened, revealing the foe responsible for disrupting the Multiverse.

Pulling Back the Curtain

Justice League Infinity #6 is a pivotal issue for this series, as DeMatteis and Tucker finally explain why the Multiverse is cracking and who’s responsible. For the past five issues, the two writers have been dropping breadcrumbs about the identity of this character, and finally, in the penultimate issue, they reveal the villain behind the curtain. Frankly, I should have seen this coming. It makes perfect sense. However, I was completely blindsided. This issue does a great job of tying things together. Many of the creative choices concerning the plot make a lot of sense in light of this issue.

I do want to take a minute to discuss an interesting facet of this particular incarnation of the Multiverse. In DC’s Prime continuity – I’m not sure how there distinguish between Multiverses in the Omniverse – the New Gods are Multiversal Singularities. While most DC characters have doppelgangers across the Multiverse, the New Gods do not. Apparently, this is not the case for the DCAU Multiverse, as each Earth appears to have a set of New Gods. This was featured in Justice League Infinity #5 when Wonder Woman met a Darkseid doppelganger who had (kind of) reformed. 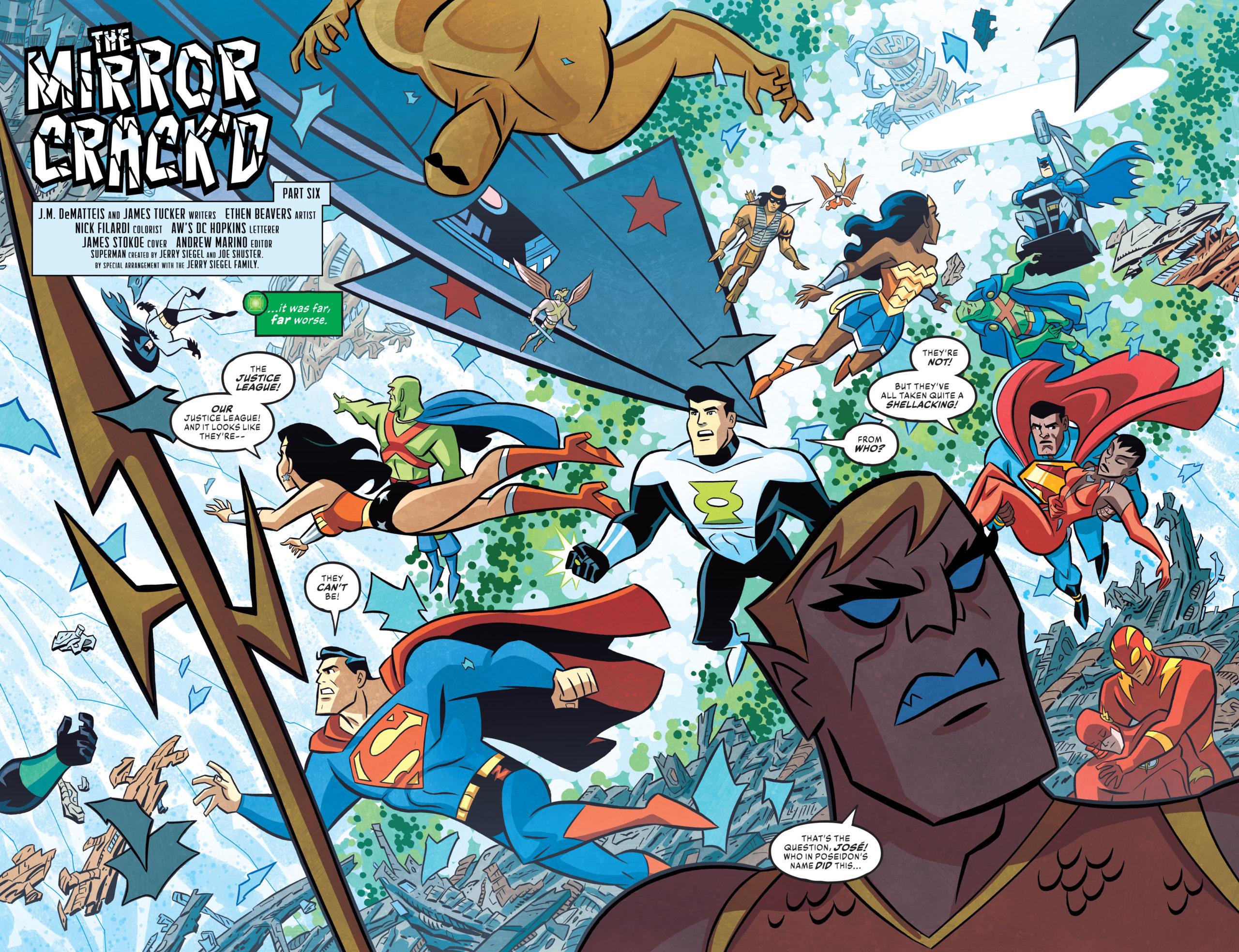 Anyway, the fact that the New Gods have doppelgangers happens once again in this series, and I have mixed feelings about it. On one hand, I like how it relates to the main villain of the series. DeMatteis and Tucker use New Gods lore in a creative fashion that works well for the DCAU. On the other hand, having various versions of Darkseid, Orion, Granny Goodness, etc. running around kinda diminishes their status. Part of what makes Darkseid so terrifying is that there’s only one, and his scope reaches across the Multiverse. Plus, this is a bit of a conundrum for DC’s Omniverse model; why is it that the New Gods are Singularities in one Multiverse but not the other? Overall though, this is a minor knit-pick that doesn’t really impact the quality of the issue.

Aesthetically, one of the neat things about Justice League Infinity #6 is Ethan Beavers’s paneling design during flashback sequences. This entire issue’s narrated from John Stewart’s perspective. When John recounts the battle in the Mirror Room, each of the panels appears as an energy ring construct. While this is a really cool design, it’s also a neat moment where form and content collide. As a Green Lantern, John’s constructs are the product of his imagination and considering that we as readers are getting the story from John’s imagination, the design works really well. My one problem with it is that it was a bit difficult to follow the dialogue between the characters. The layout of the page wasn’t the most intuitive. Nevertheless, if you pay close attention, it’s manageable.

Final Verdict: If you’re a fan of the DCAU, this one’s for you.