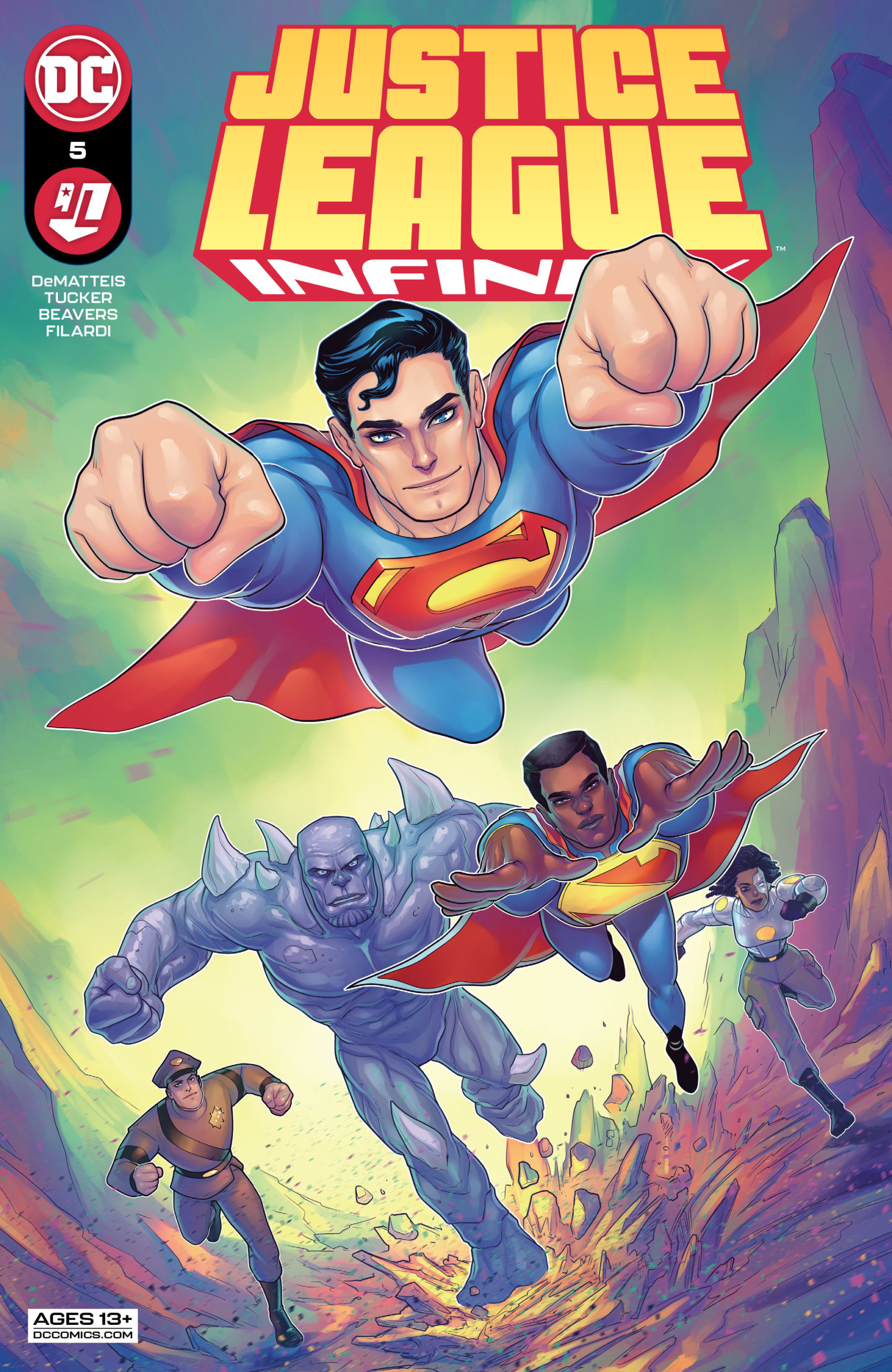 Superman and his allies punch Nazis, as the Freedom Fighters attempt to liberate Earth-X in this week’s Justice League Infinity #5.

As the Multiverse begins to collapse, a mysterious force has displaced various heroes throughout the Multiverse. Last issue, Wonder Woman was transported to an alternate Earth where Darkseid and the Justice League had made a truce. Darkseid, however, betrayed the League and unleashed the Anti-Life Equation, which destroyed everything. When Wonder Woman appeared, Darkseid confronted the Anti-Life Equation, saving Diana from imminent doom.

The current issue opens with Superman and his rag-tag band of heroes from various Earths arriving on this decimated Earth. Having rescued Wonder Woman, the team set out to find the source of the Multiversal disturbance; however, Diana buries Darkseid before leaving. While flying through space, Superman recaps to Wonder Woman how he and Kal (President Superman from Earth-D) helped liberate Earth-X from Vandal Savage’s Nazi regime.

One of the fun aspects of Justice League Infinity has been its various subplots. In five issues JM DeMatteis and James Tucker have explored four different Earths from the DCAU’s Multiverse. Each of these Earths has had its own subplots, but Earth-X has been fleshed out the most. Honestly, I’m not complaining, as there’s something delightfully liberating about watching Superman punch a Nazi. It’s borderline therapeutic.

Anyway, these subplots may not move the overarching narrative forward, but they do provide an opportunity to explore this new Multiverse, which is both similar and different to the Multiverse with which most DC readers are familiar. These stories are what make this title work, as the original DCAU did not feature a traditional Multiverse. It’s hard to write a story about a collapsing Multiverse when one hasn’t actually been established; therefore, DeMatteis and Tucker needed the space to introduce and explore these alternate realities before tackling the Crisis-level threat in this series.

Ethan Beavers’ art is wonderful. For those of you who’ve read my previous reviews for this title are probably experiencing a certain level of deja vu. Yes – I’m well aware that I have beat this drum perpetually for the past five months, but I have to say that Beavers deserves the praise. As always, he manages to capture the DCAU aesthetic while adding his own personal flair to the well-established style. His characters are beautiful, his layouts are excellent, and his action sequences are dynamic. I’ve said it all before, and you’re likely to hear me say it all again.

Justice League Infinity #5 is another stunning issue in a fantastic series. With each chapter, DeMatteis and Tucker explore fun and interesting facets of this new Multiverse. Beavers continues to produce gorgeous art and the overall packages is just all-around great.

Final Verdict: I really don’t know what more you could ask for from a comic book.

New R/C Replica Of The Batmobile from ‘The Batman’