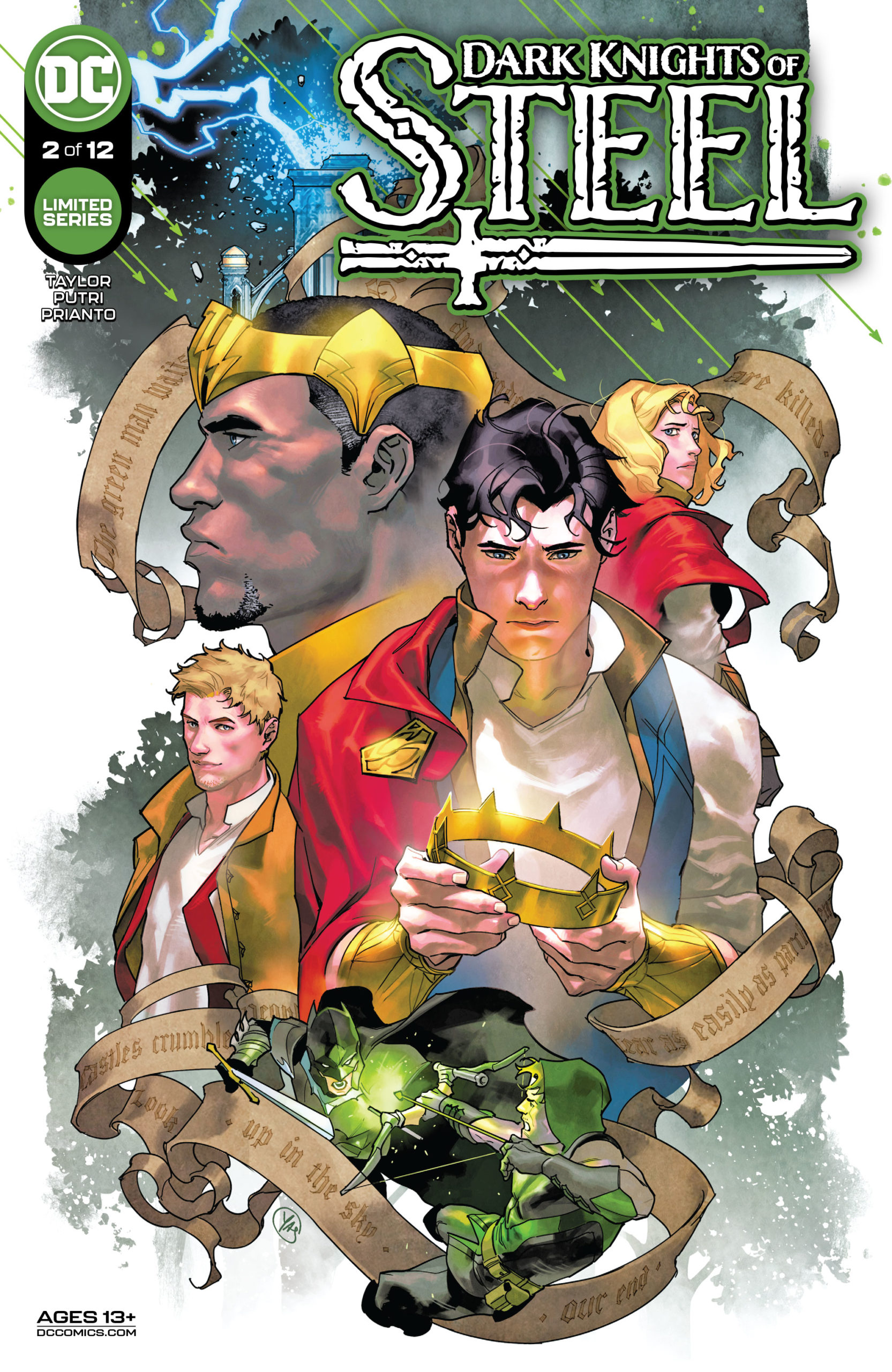 Tom Taylor warned us on social media that issue would be a lot, and my goodness, it is… in a daring, stunning way. What are the princes going to do? At times, this story feels like a cruel but captivating fairytale, like an Elseworlds story, but one which features fairytale elements. The heart-wrenching series continues, with Dark Knights of Steel #2!

This issue introduces some great characters [spoilers ahead as to whom], and the team does a beautiful job of melding them into this world. Every DC fan should be reading this tale, as Taylor is an excellent storyteller who spins gold. Readers can tell he carries feelings for the characters through his writing.

In issue #1 we left Bruce not-so-delicately finding out he’s the illegitimate child of Jor-El and Martha Wayne, making him Kal-El’s half brother. Although he’s an often disrespected son of the throne, he was accepted with love into both families. The House of El has taken him in as one of their own, and his illegitimacy’s never hidden. However, up until the moment of Jor-El revealing to the young Bat-Prince that he’s his biological father, Kal and Bruce were unaware.

As the secret’s revealed, Jor-El is heartlessly assassinated and Bruce’s Kryptonian powers are triggered through rage. Lana and Kal hear his screams of anguish as they rush to the scene. The tragedy is beautifully portrayed, and I’ll talk about the art soon, but… my God, all the emotions that are captured by the words and visuals! Taylor and Yasmin do not fail us.

The Knight of Steel performs a classic jump into action to catch the assassin. With his newly manifested super strength, he’s able to save his mentor/caretaker Alfred as they ride into battle. We then get a moment that just tugs your heart. Bruce isn’t able to save Jor-El, but he protects Alfred with the utmost precision and skill. Batman, like in all universes, is not to be messed with, and this series doesn’t change that. What we get is Batman at his optimum.

We also love his emotional constipation. One of my favorite things about this Bruce Wayne is the way he’s not able to share this newfound information with his half-brother Kal. His internal monologue shows that all he’s concerned with is that Kal’s mourning the loss of his father, but wouldn’t he be happy to know that his Kingdom’s protector is also his blood family? Kryptonians are already alone and scarce, so knowing there’s one more right beside Kal should be joyous news. I’m excited for all the possibility of drama and angst this situation can set up.

Another of one my most loved scenes in this issue features Harley and Batman’s friendship. Her pestering Bruce to just talk shows she’s a true friend. He combats his urge to open up and deflects her advice by calling her a court jester, but this only means she’s also the court’s advisor. So… take that, Bruce! Open up to your loved ones, please. We beg you.

We’re also given a larger glimpse into the Kingdom of Storms. Although, the first issue made it appear they were the “bad guys”, on deeper investigation it appears to be made up of a somber family, filled with love and strong moral values. Their goals are to protect the universe from the prophecies of great demons. Their King, Jefferson, believes these demons to be Kryptonians. I love the playfulness and training portrayed by the members of the Kingdom of Storms; they’re not the bad guys, there just seems that there’s been a great miscommunication. This could lead to epic battles in issues to come

Lastly, Wonder Woman and Supergirl make an appearance that’s just “chef’s kiss!” Their costume designs are gorgeous and functional, and their interaction’s a real dream come true. We win!

We do not deserve Yasmin Putri but are thankful every day for her existence. The tears in Lana’s eyes are devastating, the pain in Kal’s face, and the guilt and regret in Bruce’s are everything. My heart aches and it’s all due to the beautiful art. It’s captivating and DC Comics has picked a fantastic artist to depict this fantasy. Putri’s art, evocatively colored by the hugely talented Arif Prianto, gives an angelic, princely, and heavenly feel to Dark Knights of Steel #2.

The joy and comfort depicted in the characters from the Kingdom of Storms is drawn with warmth, exudes support, and a familial feel. There are so many questions left in the story, and they will unravel as we continue, such as why do they believe so strongly the Kingdom of El is their enemy. Thus far, we haven’t seen anything truly villainous from their side, however, we’re led to believe that they had a hand in the murder of a King.

I can’t get over how gorgeous each character is in these comics, from the old to the young. Dan Mora and Greg Capullo are known to draw some of the most alluring versions of Bruce Wayne, but Yasmin Putri gives both gentlemen a good run for their money. Their expressive, soft faces, along with their costume designs are beautiful, and I’ll praise them in every review.

I also love how the weather also alludes to the attitude of the characters, conveying mood. Where Bruce and Kal are surrounded by storm and rain representing the tension, Anissa, Jennifer and Jacob are in the sun with their father. While Diana and Kara are in twilight, as they part-ways (hopefully not for long). The Amazonian world is gorgeous. The colors are fae-like, Diana and Kara are depicted so beautifully, as they should be because they’ve always been known as some of the most beautiful women in comics.

A fun fact; my friends and I run a few Dungeons and Dragons campaigns, and the GM has kindly created a starting level character representing Bruce for me to play out of this series in our fae-world. He’s a Blood hunter, and these characters often work with melee and a little magic. He is not as OP as the Bruce Wayne who’s laid out on the cover in Taylor’s and Putri’s version, as he appears very high-level with the stats depicted… but, I’m working on him to get there.

This is a fun and emotional world, and Dark Knights of Steel #2 continues a must-have story for all DC fans and those who love our wonderful Bats and Kryptonians. Readers can have a lot of fun with this world, and I hope it doesn’t end with this series. It’s action-packed, tragic, romantic, and moving. Each issue’s filled with more tension and excitement, and I cannot wait to see what issue #3 has in store!