“Dark Knights of Steel” – Book One 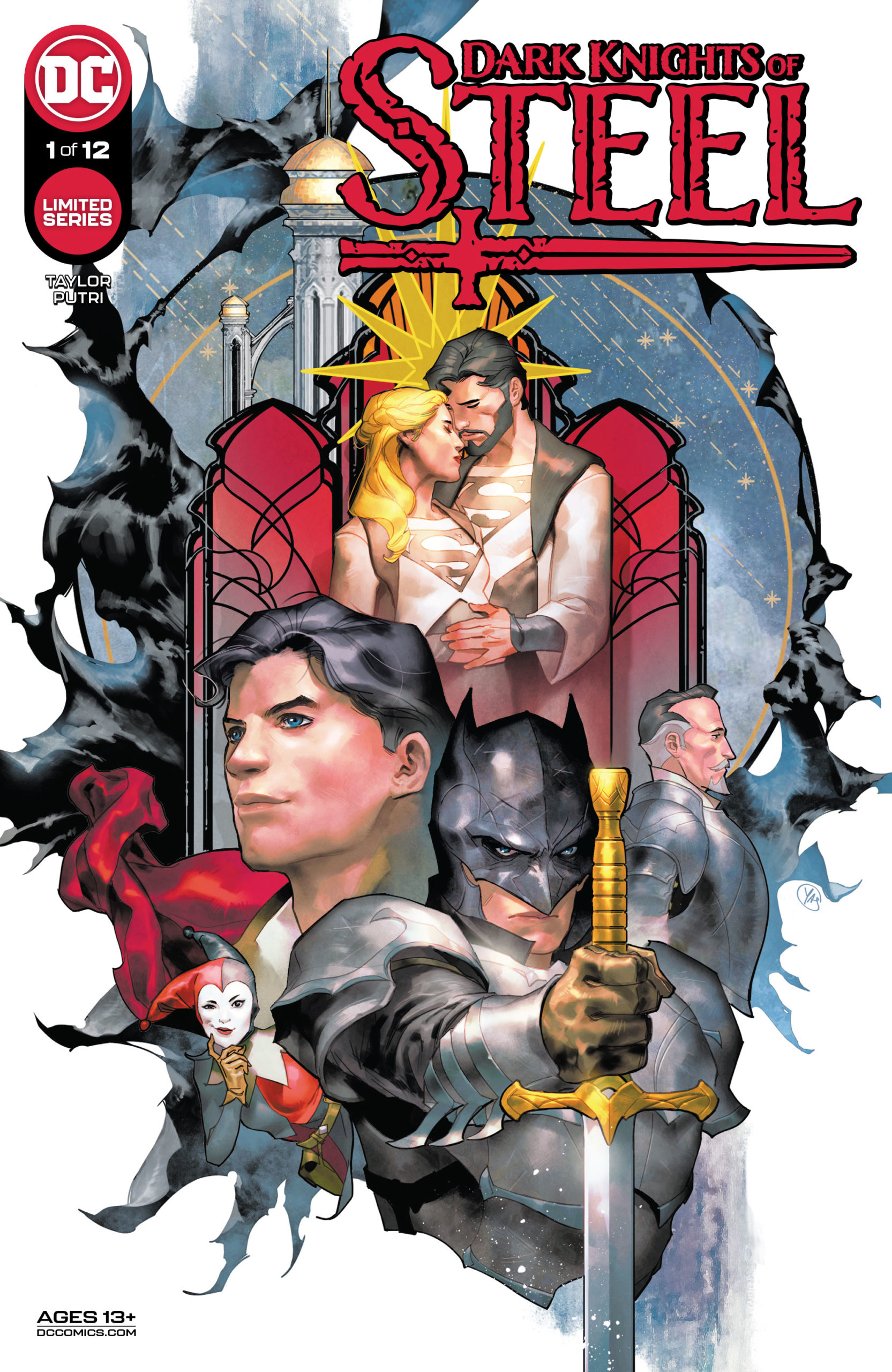 The anticipated DC/Fantasy series written by Tom Taylor (Injustice, DCeased) and drawn by Yasmine Putri (DCeased, Red Hood) is finally here. Dark Knights of Steel #1 is far more than an Elseworlds style re-working of the Dark Knight and the Man of Steel… Roll for initiative!

This first issue is mind-blowing, fantastic, takes you into another dimension, and leaves you there for a few hours because you feel mesmerized, and blessed. Just… WOW! This is a wonderful take on the two world’s greatest comic book characters, and more. The first chapter delivers a wonderful depiction of graphic arts that portrays a real-life, mixed with fantastical components, when compared to the pragmatism that Superheroes are known for. The motion and action encapsulate the light and the dark, making this not only a sensible, but also a heart-wrenching narrative. Bringing a cosmic reality to fantasy, a supernatural world that carries real-life elements.

I believe this story will go down in history as one of DC’s finest, I won’t leave major spoilers, but – my goodness – the take on Bruce Wayne and Kal-El is a genius re-telling and interpretation, and I love their transformation into Dungeons and Dragons type-characters, in a high fantasy world. There are two major spoilers I will not discuss in this review, so you’ll just have to read this wonderful comic, because it is an incredible twist. Trust me, you won’t be sorry.

Enter the Bat-Prince. He’s essentially a Blood Hunter and Paladin, capable of great feats of combat, with notes of magic… but he doesn’t understand why. Both he and Kal are protectors, but capable of harnessing the darkness with them. They’re also often misunderstood, as much by each other as by themselves. Bruce is actually terrified of himself though he’s dedicated to his cause, as any Dark Knight would be. Beautifully enough, his cause is protecting the Kingdom of El, particularly Kal-El as there is magic set on destroying their Kingdom.

It’s in the title, after all, he is the Dark Knight for the Man of Steel. His devotion and dedication to the Kingdom of El are stunning, even alluring. His self-interpretation is vintage Bruce Wayne. The Knight’s dedication to his Robins is also filled with care and concern, and one can tell they’ve been trained with masterful class. In this world, Bruce has lost his parents and is taken in by the Kingdom of El. Tom Taylor does a magnificent job of going into the minds of these heroes, and what he touches often turns to gold. The connection between Bruce and Kal, their dialogue, and friendship… no… brotherhood, is something that can be seen in all universes between them. Their partnership is a universal constant, and the artistic and verbal chemistry is inspiring.

While this isn’t the Superman we know; he wasn’t raised on a farm by Ma and Pa Kent, so what he have here gives him an interesting development. The humility and nobility of the character are still in full effect though. His care for his family and friends, and for those who work for him is visibly demonstrated. Once again, Taylor does an incredible job of translating our Superman as a Disney Prince, with eagerness to contribute. He could indeed be cast as a Paladin, with a Nat 20 on persuasion, as he’s constantly trying to fight his boundaries.

A line that perfectly describes Kal:

I will not stand by while Bruce and his Robins risk their lives to protect us. Not when axes break on my skin.

If Fantasy isn’t your game, I still recommend that you collect this series, for the art at least!

Way to pull out all the cards! DC nailed their choice of artist, as Yasmine Putri is a goddess with her line-work, coloring, action, and facial expressions. We’ve all seen the previews and fans have lost their minds over the beauty and expressive features of all the characters. Each panel demonstrates dedication and care, as we can tell that the artist was loving her creations as she designed them. The costume re-designs are also top-choice. The Dark Knight’s armor and insignia, both on his shoulders and chest are divine. Bruce comes from royalty, and Jasmine captured that immediately. His sadness and self-doubt are also highlighted in the depth of his design.

The narrative centers around a young Bruce Wayne and a young Kal-El, and everything that young men go through is expressed in this universe. The backgrounds and sepia tones allude to a sense of peace that’s about to break, as indeed, it does.

Kal’s attire is regal, and excellent, his design is like a Prince’s as his cape drapes over his shoulders. The colors red, blue, and gold are eye-catching. The Dark Knight’s design is that of a protector, fighter, and Prince as well. The Royal Family, Robins, Constantine, Harley, the other depictions and designs are absolutely exquisite. I will delve more into some of the other characters over on DC Comics News. I cannot get past the beauty and allure of the art. To partner up with Putri was a phenomenal decision, and I think that we should let Taylor and Putri be DC Comics’ World’s Finest creators. It’s a Golden Age for comic artists; jaw-dropping, inspiring, and DC Comics has been hitting it out of the park.

I fell off the universe after reading Dark Knights of Steel #1. These characters mean everything to me, and as a D&D player, casting each of them in that light is mad-fun. The art is poster-worthy, and each panel feels powerful. The shading in the facial structures, the intensity of supernatural powers, the redesign of our beloved characters, all are brilliant.

The hype prior to this first issue was absolutely worth it, and I’m adoring the creations by fans. Prepare to get your world shaken, because the cliff-hanger is insane! This is a must-have, don’t miss out! I imagine it will sell out everywhere, so call your stores and place your orders.