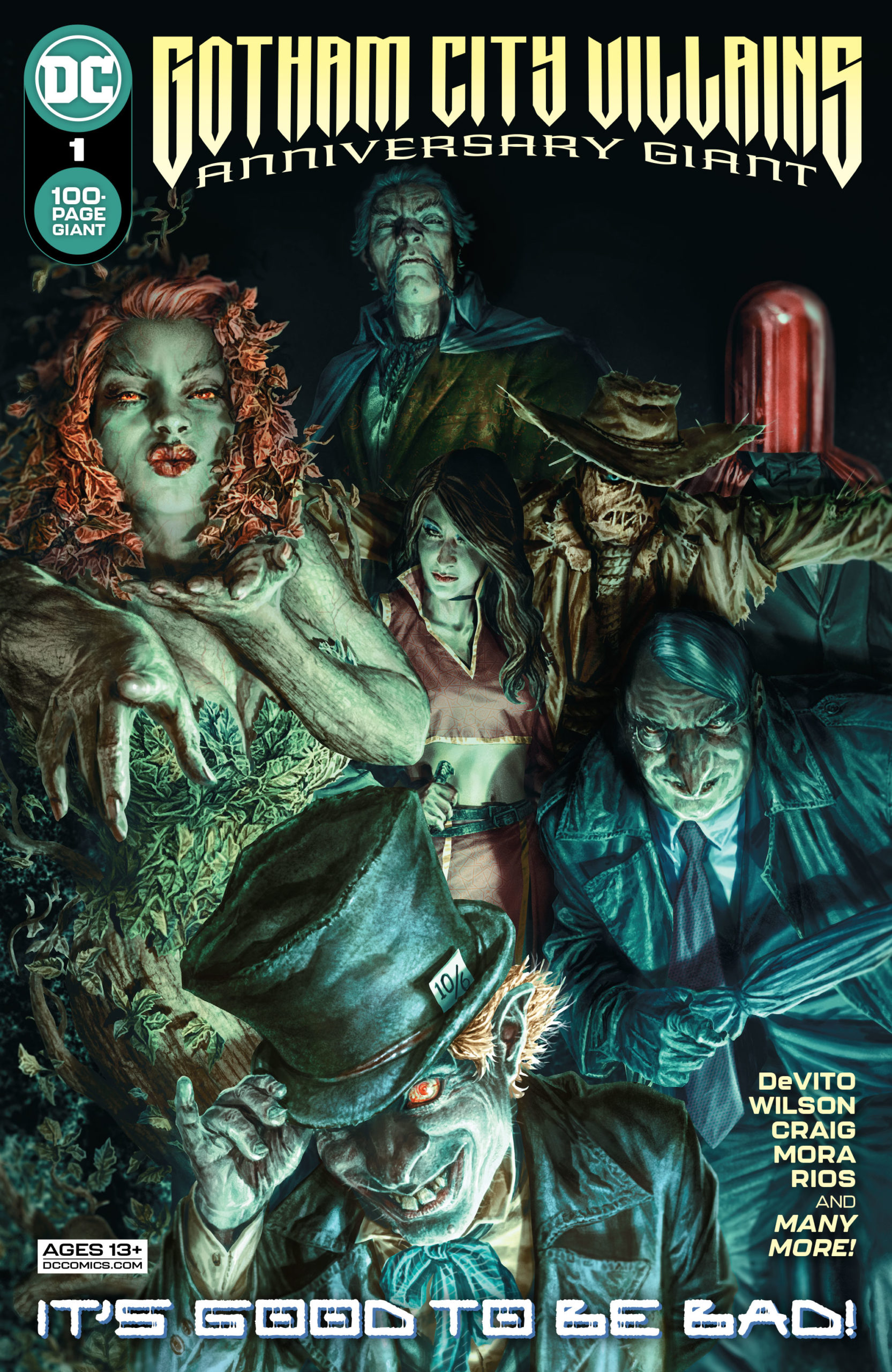 What makes Batman the best comic book character? The suit? The mask? The car? Well… all of those things are super cool, but most people would say the one thing Batman has more of than any other character is the best villains anyone could ever imagine. The Gotham City Villains Anniversary Giant #1 is just for them.

The book kicks off with a story from a high-profile writer and a top-drawer artist. We see Danny DeVito; The Penguin himself, writing a story about the on-screen versions of the Penguin and Catwoman. The two villains team up, in a tale drawn by the phenomenal Dan Mora. I’m really glad that I knew DeVito was the writer of this story before I read it, as it’s not written like a traditional comic for one, so knowing this let me read the story in his Penguin voice. This was clearly written by someone who loves the character of Oswald Cobblepot, and also wants to send a message to the world. Knowing the writer really improved this story for me. Of course, the art was phenomenal.

What If We Had No Fear?

Our second tale takes a step closer to the current run of Batman, in a city where, somehow, Scarecrow has succeeded and there’s no fear in Gotham. This is a dark and nightmarish Gotham City. The art and theme of this story reminded me a lot of “Haunted Knight” by Jeph Loeb and Tim Sale (the three Halloween tales that led to the legendary “Long Halloween” and “Dark Victory”). We’re also treated to a Nightwing Vs Scarecrow fight, which is fun. The ending leaves us still asking the question; what if we had no fear? Anything could happen!

Poison Ivy has been getting a lot of attention of late, as she’s been present across a number of DC titles. She’s also been revealed as a big bad in the show Batwoman. This story shows us a glimpse of the doctor the original Ivy (Pamela Lillian Isley) was before she became everyone’s favorite eco-warrior. We see her knowledge of plants, and microbiology that could kill everyone. I felt smart whilst I was reading this! The art was dark in tone with the bright colors of the green and the flowers shining through; maybe this is how Ivy sees the world? This story felt like it was setting up something bigger and by the end of it that was revealed to be true, the words Ivy’s story will bloom in 2022, definitely left me excited… and more than a little worried.

For The Sky Is Red

This story came as a bit of a shock to me, as I was expecting a tale about a twisted pre-Joker, a man who was evil before we even knew him. Turns out this was a story about a low-level criminal who invented the Red Hood symbol to add some gravitas to his armed robberies. This story was more of a ‘Become a symbol’ type story about a man who’s about to die, telling his captures his tale before they murder him. This story did leave me wanting more, as a Gotham city villains book with no Joker story has left me scratching my head. I just suppose they wanted to focus on all of the other characters who don’t get as much spotlight as the clown prince of crime… he did get his very own 100-page special last year, after all.

This was a Mad Hatter story that sent a chill up my spine. This great little tale was told from the point of view of Robin (Damian Wayne) and it’s great to see his analysis of Jervis Tetch. A favorite moment was when Robin thinks about the technology that Hatter can create, and the damage it could do, but all he wants to do is live in a Wonderland and have tea parties. The only thing standing between the Hatter and complete chaos in Gotham is his sanity. This in itself makes me think about how often that’s the case in Gotham? Many members of the rogues’ gallery are scientists… what could they really be capable of, if they weren’t held back by their own broken psyches. This was a great story and a  highlight of this oversized issue for me.

Read Arkham City: The Order of the World to see where the story goes next.

The Happiest Man In Gotham

Like a moth to a flame, this villain just keeps getting burned. This is a somewhat tragic tale of a C-list villain who had aspirations of being one of Batman’s big-bads. Killer Moth, who I don’t think has ever lasted more than two hits against the Dark Knight, finally tells his tale; how he’s always been a parasite, feeding off of others for his own personal gains. He also sheds light on how he got to this point in his life… but don’t shed a tear just yet, this story also tells us how we often overlook that we’re good at chasing what we wish we were good at. This is a C-lister who’s more than happy slipping under the radar and getting by. If it wasn’t about a dangerous criminal I’d almost say that this story was quite heartwarming.

A chess match between Batman and Ra’s Al Ghul… I’d pay to watch that! Two of the world’s most dangerous strategists playing against each other, each sizing the other man up. The story starts off with a game but ends up taking us on a journey into the dreams of one man and the nightmares of the other. These two have such a complicated history and mutual respect for one another. The fact that Ra’s is also trying to save the world, in his own twisted violent way, makes them kindred spirits. Not to mention their feelings towards Talia. This tale of two titans, forever locked in battle, shows Bruce what could happen if the battle was lost, or if he ever compromised. The story also leads straight into the Batman/Superman: Authority Special about the Future House of Al Ghul ruling the world!

If you’re feared, respected, and have a mission above all else that only you can explain. How is it you don’t know who you are, or where you really come from? This tantalizing tale takes us through the mind of Talia Al Ghul, The current head of Leviathan (See the latest Checkmate series). We’re also shown her training under the Demon’s Head, in amongst the League of Shadows and League of Assassins. Talia was never going to be a normal person, so when she looks in the mirror what does she think of the person looking back at her?

This tale is an empowering story of a young girl forced to become a weapon and how she decided the only person who would control that weapon is herself. She’s more similar to Batman than I think most of us realized. The art in this story is beautiful and it was incredibly well written. I’ve missed seeing this side of Talia. Have no fear though, her time is coming. In 2022, she will be popping up all over the board, in Batman, Robin, Deathstroke Inc., and the one I’m most excited for, “Shadow War”!

This book gives a beautiful glimpse into the dark minds of Gotham’s worst. Each story is uniquely drawn to how that character may be feeling, or how they see the world. Each yarn is spun to keep an episodic book grabbing your attention for a new reason every time.

A lot of the characters in this collection will rear their ugly heads again in 2022, and that doesn’t bode well for our dear Dark Knight Detective. For us fans, however, it’s going to be a wild ride.

If you love Batman, you’ll love this comic. The Gotham City Villains Anniversary Giant #1 shows us why Batman has to be the best… to take on the worst.