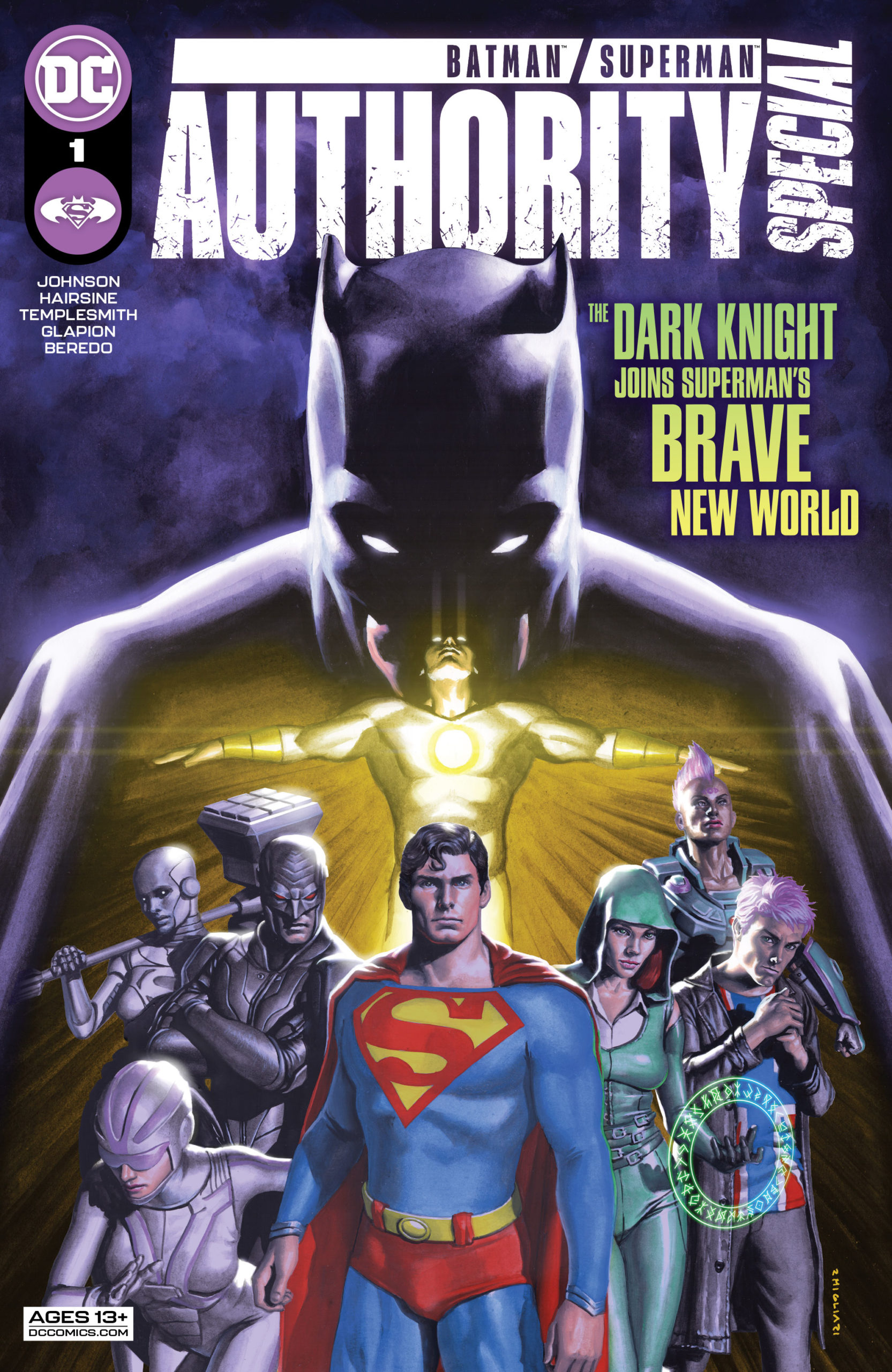 Anti-establishment, anarchy, chaotic, fantastic hot messes. That’s what Superman The Authority by Grant Morrison and Mikel Janin has brought us. This is a powerful, epic team-up fighting against exceptional dark forces. What could add more excitement and strategic advantage to this motley group of heroes? Superman’s confidant, and at times, secret weapon, Batman/Superman: Authority Special #1 takes center stage in this bumper one-shot, as we take a leap into the dark multiverse. This issue explores the DC Omniverse, and we receive a unique adventure, first-time interactions, and knowledge that could impact several storylines. This is an important issue for DC-lore that you don’t want to miss.

In this epic adventure, the writing team ventures into a dimension-shifting narrative. Superman and his team need the assistance of Batman for a rescue mission; they must save a guardian of the multiverse Tempus Fuginaut. Several villains stand in their way, an Empire of Shadows if you will, as the Al Ghuls plan to use the guardian to unlock gateways and take control over the multiverse. The story’s captivating, it brings in many components of DC lore, and how their universes work as universe-hopping is nothing Batman or Superman are new to. Johnson does a fantastic job keeping the story information flowing as events transpire.

However, one of the best aspects of the issue is probably the character interaction, as I can’t get enough of Batman meeting Midnighter. Their characters have only crossed passed through degrees of separation. Johnson does a joyful and fun job at having them both interact… well mainly Midnighter. They’re beautiful disasters, the both of them. Midnighter’s shots at the Dark Knight are probably well-deserved, plus if no one else is going to serve it, it might as well be Lucas Trent. In addition, Apollo teasing Midnighter is always welcome, as they cross a hieroglyphic of Batmanesque people. As Midnighter teases the Bat, Apollo teases his husband. This chemistry is wonderfully depicted.

The Dark Knight learning to trust is another heartwarming scene and my particular favorite. He really can’t deny his best friend.

Batman: There’s too much riding on it. If we fail, the Al Ghuls invade. And it’s Barbatos all over again.

Superman: Bruce, you came to me with this because you trust me. So trust me. If they weren’t up to this, I’d know. They are up to it.

The trust between the team and characters is so well depicted. For those who enjoy the found-family trope, the Authority is a good series to be hooked onto. Another winning point is the story between the dark universe the heroes enter and their current state.  It’s so easy to note the darkness, insidious tone. Mesmerizing.

Oh goodness… the artistic team on this issue is… WOW! All the art from DC Comics this year has been phenomenal, they have exceptionally upped their game and are bringing in the best of the best. From the fighting stances, facial expressions, and all the different realities, the art is absolutely immersive.

The depiction of the dark universe is so eerie, it’s stunning. I love the way our heroes are drawn in the dark world. Their distortion is unnerving, but it’s meant to be. All this is done to create discomfort and dread because the mission will go haywire unless they fix things. It brings a sense of urgency and really gives the feel that the viewer is dimension-hopping. Also, Apollo glowing, acting like the sun god he is, is *chef’s kiss*.

Each panel is full of thought and expression, and readers are able to read Bruce’s thought process. Batman has a history of having difficulty in trusting people, and the artists do justice to his pensive, stoic expressions. Also, Batman handling a sword is very in this November.

The Batman/Superman: Authority Special #1 should be one of the number-one sellers for DC Comics, and there’s a great reason why. The story is engaging and epic, it opens many avenues for future stories, and of course, it features our World’s Finest team. Some serious narrative thought’s gone into this issue, as well as a taste of fun superhero banter. The art is gorgeous and eye-catching, and I’ve collected both the initial cover and variant and do not regret it. I don’t think you will either.