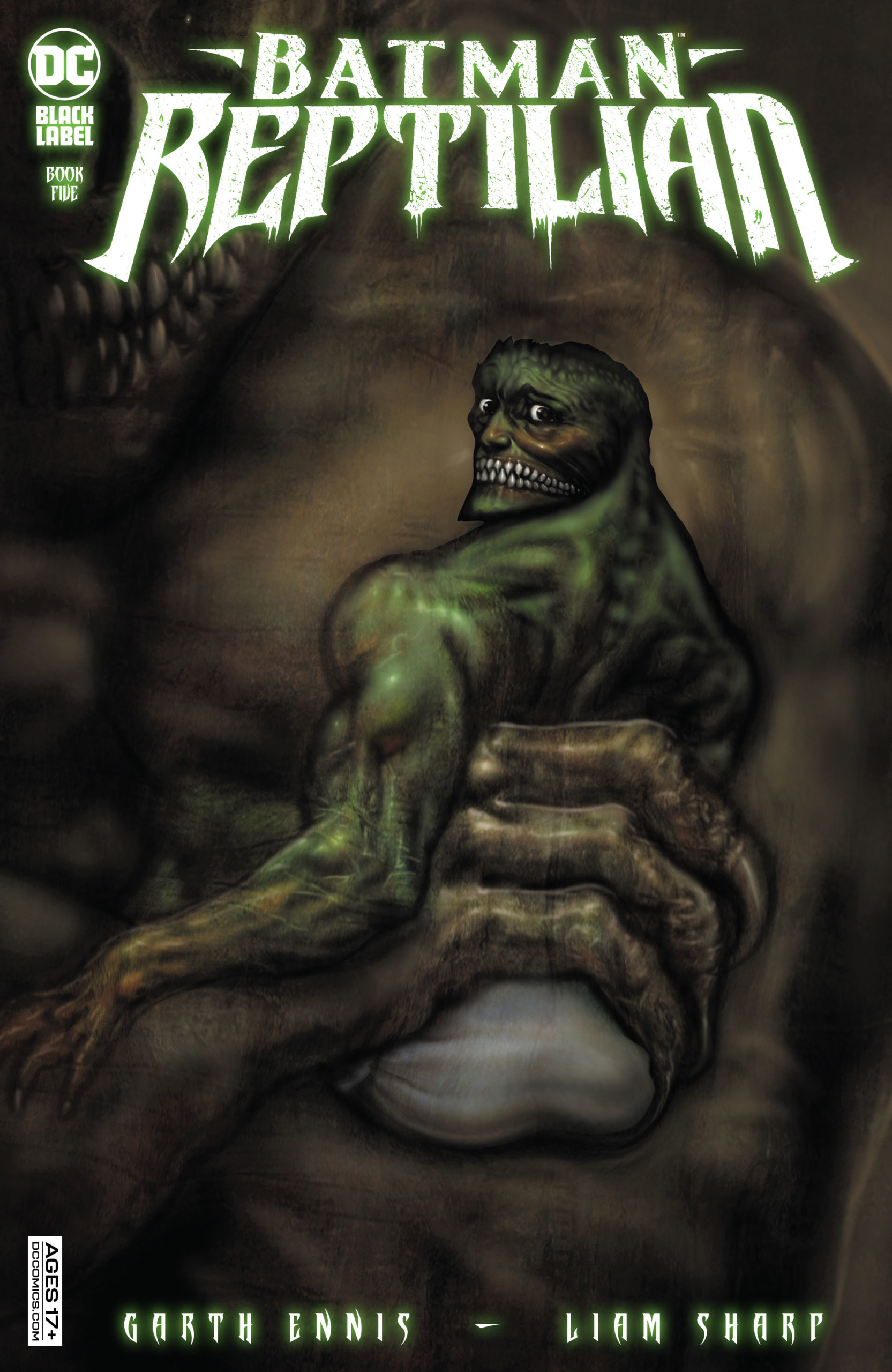 Our investigation continues with Batman: Reptilian #5 and as we get close to the end, I’m sure that things are about to get a lot crazier for Batman than they already were. Now that Batsy and the monster that was causing his rogues gallery to run scared and go into hiding are finally face-to-face, things are about to get interesting.

Things Have Taken A Turn

The first page starts with words that I never thought I’d read in this context. Honestly, a lot of things that happen this issue I never thought I’d ever read, but the first page is the most jarring of it all. This is mostly because it comes completely out of nowhere and even Killer Croc is thrown off by what the Dark Knight says. Then he just… keeps saying stuff. When I said that things were likely to get crazier for Batman, I didn’t think things would go in this direction of crazy.

Killer Croc: I knew you were enjoyin’ this!

Batman: After the trouble you’ve given me through the years, can you blame me?

Poor, wimpy, in-too-deep Konstantin Volkov is finding out just why Batman is keeping him around, but even taking a ride in the Batmobile isn’t calming him down. He had more than one page this issue at least, although that’s never a good sign for him. Maybe that’s just how Batman treats disposable grunts? 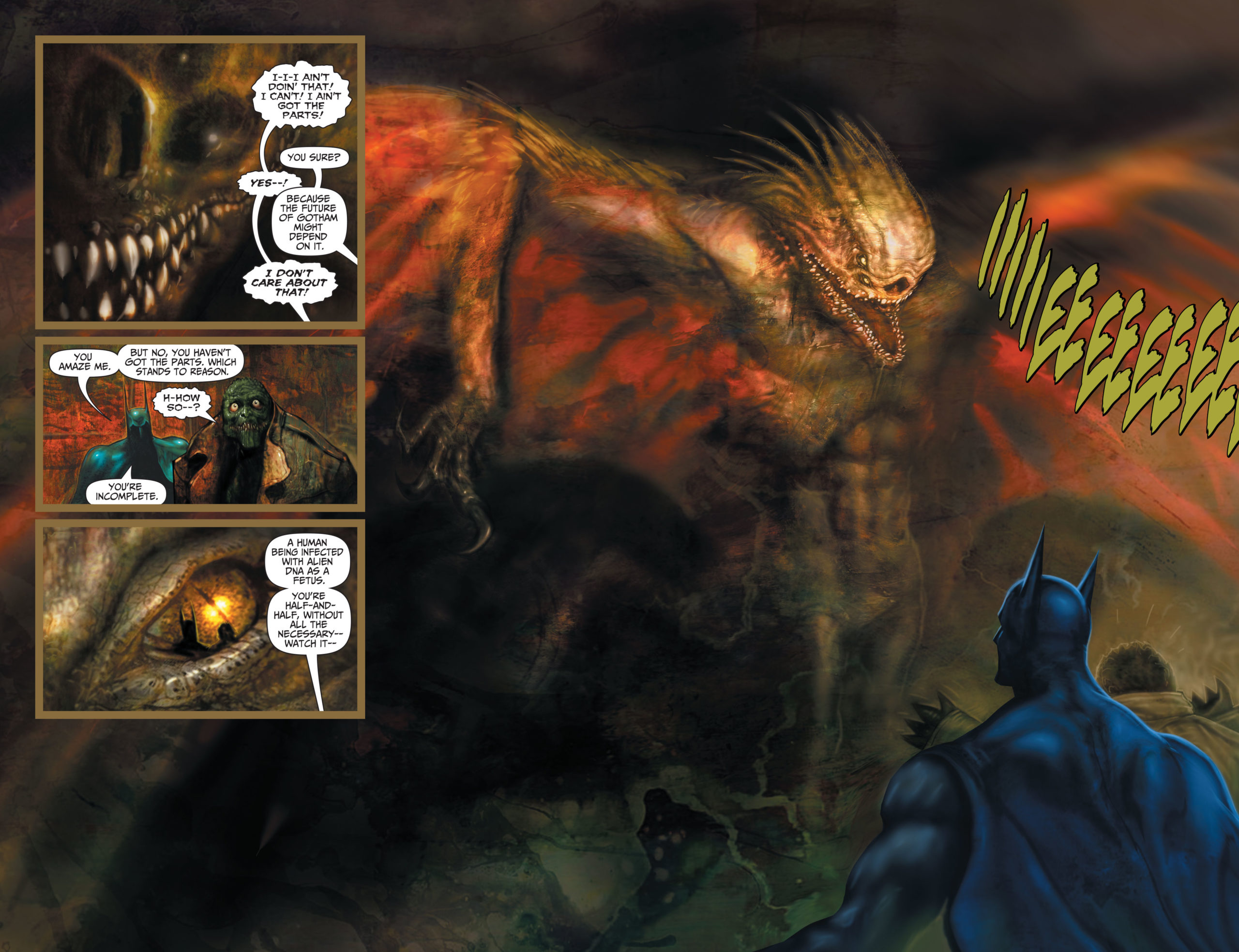 Into The Thick Of It

Killer Croc: You can get signal all the way down here.

Batman: Of course I can, it’s the Bat-phone.

It’s nice to know that even when he’s in as much trouble as he is right now, Batman’s dry humour never fails. Alfred has taught him well. Although, it looks like the Wayne Butler has seen enough of Bruce’s shenanigans to say anything more than a passive aggressive comment or an “oh my”, and I’m certain he’ll say it without an ounce of emotion. None-the-less, even looking at a strange alien that’s been causing havoc in Gotham City isn’t enough to stop a good joke.

We get to see much more of the monster hunting down villains this time and I must say that I’m glad it’s only a comic creation. Not only is it giant and has more legs than anything should, it looks like it could eat a building in one bite if it wanted to. Oh, and and it has wings. Wings! It’s basically a giant insect-reptile and that’s not a combination any world needs… unless it involves dragons, but that’s a different story. Finding a way to stop it will be fun, especially when Killer Croc’s just dragging the team down at the moment.

The art, as always, is fantastic in Batman: Reptilian #5, however, it feels like the storyline has paused a little. To me, this issue felt more like Batman talking about a theory and thinking of a plan on the fly, and then diving in headfirst without doing much of said thinking. Then again, Batman doesn’t always share his train of thought until the end, so we’ll just have to find out in a few weeks to see how wrong or right things go for him.

The ominous “Heh, heh, heh” on the last page probably isn’t a good sign for the last issue of the series either.

Join me next month for the final issue, and check out the review for Batman: Reptilian #4 here!