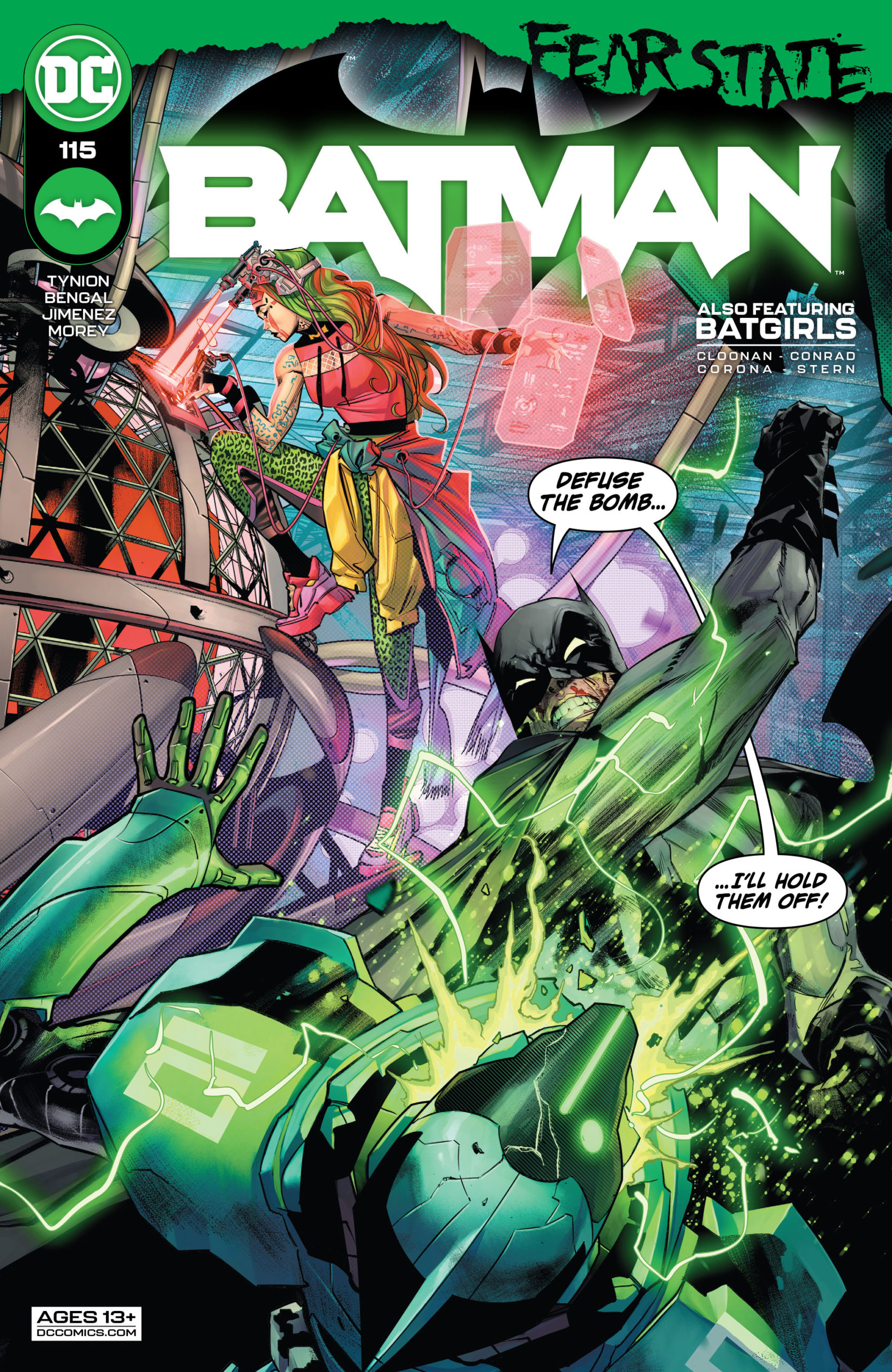 Batman #115 is an intriguing issue, as it avoids focusing on just one plot thread. Within these pages, James Tynion IV progresses the narrative throughout numerous disparate narrative threads, but manages to make each one feel relevant and worthy of the reader’s attention. The title of the book may be Batman, but this release spends equal time focussing on multiple protagonists/antagonists. I applaud this approach, as it offers the reader variety and a little bit of everything to chew on.

The main thrust of the issue is the ruthless nature and gradual unravelling of Simon Saint. The mastermind behind the creation of Peacekeeper-01 is a fascinating character on the page; a salesman like no other, his corporate sheen masks his morally bankrupt centre and lack of ethics. Tynion depicts him here as a man on the edge, barely keeping his psyche together as he struggles to keep his master plan on track. This makes for some wonderful exchanges between Saint and his subordinates, highly entertaining stuff indeed! When faced with the realisation that Poison Ivy’s reaction could bring Gotham to its knees, there is only one option – attack!!

After several weeks of me extolling the virtues of Jorge Jimenez’s spellbinding art, this issue sees a injection of new blood in the form of Bengal. Being given the reigns on DC’s flagship title is a huge sign of DC Comics’ faith in his talent, and it has to be said that their faith is extremely well placed. His style is somewhat different to that of Jimenez, but the change doesn’t feel jarring in any way. as the two actually mesh together quite well. Bengal’s lighter style, tonally speaking, is a worthy counterpart to his more illustrious partner. Slightly more cartoon-like, each of his pages is vibrant and fun. I hope to see plenty more of Bengal within the pages of this book moving forward.

Jimenez’s version of Scarecrow remains the measuring stick though, as his diabolically terrifying take on the character is so striking. With the villain also currently in the spotlight due to being the big bad in season 3 of Titans, the timing in using him prominently in the comic landscape is excellent. Whilst other members of Batman’s Rogues Gallery may be bigger names, this, the most cerebral of villains, has always been a favourite of mine and I love the creative choices being made with Dr Crane.

The bonus story here, entitled Batgirls, is another significant addition to the publication. It’s hard to discuss without diving headlong into spoiler territory, but what I can say is that Ms Gordon, Ms Brown and Ms Cain have got a lot on their plate, dealing with the technological aspects of “Fear State”.

Batman #115 is a more sedate issue than its predecessor, but no less enjoyable. Pulling on the various threads, and giving them all a bit of their time in the sun, it feels like each one is building up to a violent crescendo. As the Tynion era starts to approach the final furlong, all parties concerned are going to be feeling the after effects for some time to come.