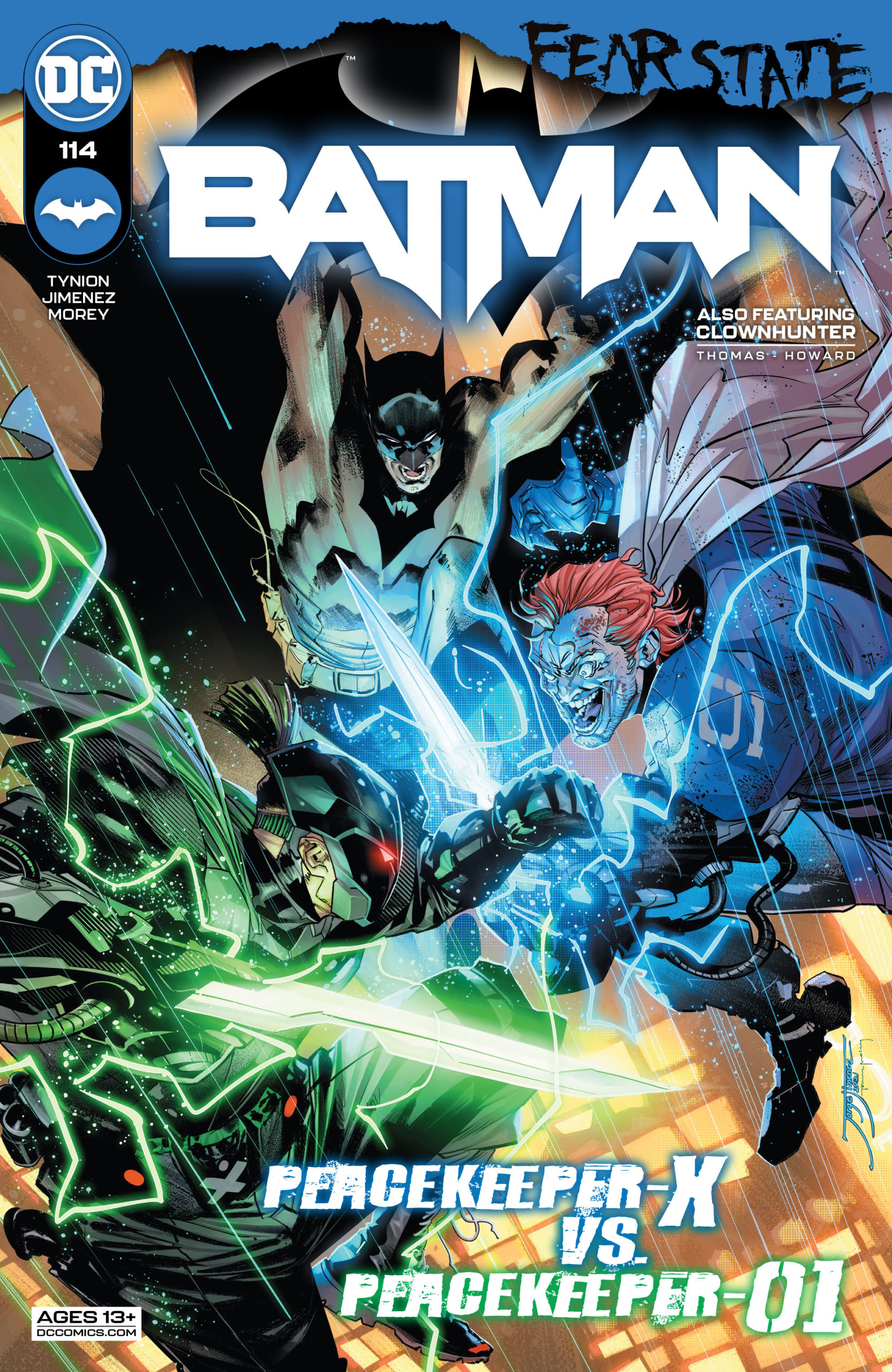 Batman #114 pits Peacekeeper against Peacekeeper in a brutal battle that has catastrophic consequences. As the wonderful cover art illustrates, we get the much-anticipated face-off between Peacekeeper-01 and Peacekeeper-X. Quite often these types of clashes can disappoint, but it’s safe to say that James Tynion IV has delivered the goods here, in spades.

The ferocity and sense of high impact are palpable, which is a testament to both Tynion’s script and the wonderful artwork of Jorge Jimenez. As I mentioned in my review for Batman #113, these two creative giants are a match made in heaven. The visuals tell the story just as much as the written word, and in a physical battle, the visuals carry the load even more. The two augmented behemoths colliding has a T2-style flavor to it, with these two twisted lawmen being more machine than men. Several pages of carnage ensue, including, in a booking that Vince McMahon would be proud of, Batman making the proceedings a triple-threat match. This run of panels is a true feast for the eyes and demands repeat reading.

Of course, this issue isn’t just a slugfest, as running concurrent to the fisticuffs is Miracle Molly ruminating on the Scarecrow’s methods and how to combat them. This is a nice juxtaposition to the main thrust of the issue, a more cerebral counterpoint to the physicality. As a brand new creation, Miracle Molly is an interesting one, so I hope the character sticks around more long-term and isn’t destined to be a sacrificial lamb or one to end up lost in the shuffle. Whilst her garish appearance does bring to mind a lesser version of Harley Quinn, there’s certainly a lot more going on beneath the surface. This is somebody that could end up as an effective frenemy for Batman down the line; a necessary evil that he indulges when their agendas align. The path of the character is one I shall be watching with keen interest.

The road to “Future State” goes through “Fear State” and the ending of this issue feels like a tipping point. Advance knowledge of the City’s fate does frame the reading experience of these current issues, but never at the expense of intrigue and anticipation. It’s one thing to know the end result, but getting to find out how we get there is much more interesting. The plethora of prequel movies made over the last two decades is an indicator of that and Tynion is still capable of providing us with surprises and emotional moments that we may not have anticipated. Every new issue has something happening that the reader can hang their hat on.

Once again, the bonus story here continues the misadventures of Clownhunter. Whimsical and abstract in nature, all Boy Wonder fans should be very happy with the appearance of a certain character here. The team-up of these two young men should provide some interesting and entertaining times ahead. When characters are opposites in terms of their personalities and ideologies it makes for good content!

Batman #114 is velocity personified. Telling a story with physicality is an effective narrative device, and Tynion does it here with great aplomb. The landscape of Gotham City is very different at the end of the issue from the start and, as we continue our march towards the endgame, we can expect plenty more of the same.

Pick this issue up, it’s a good one!