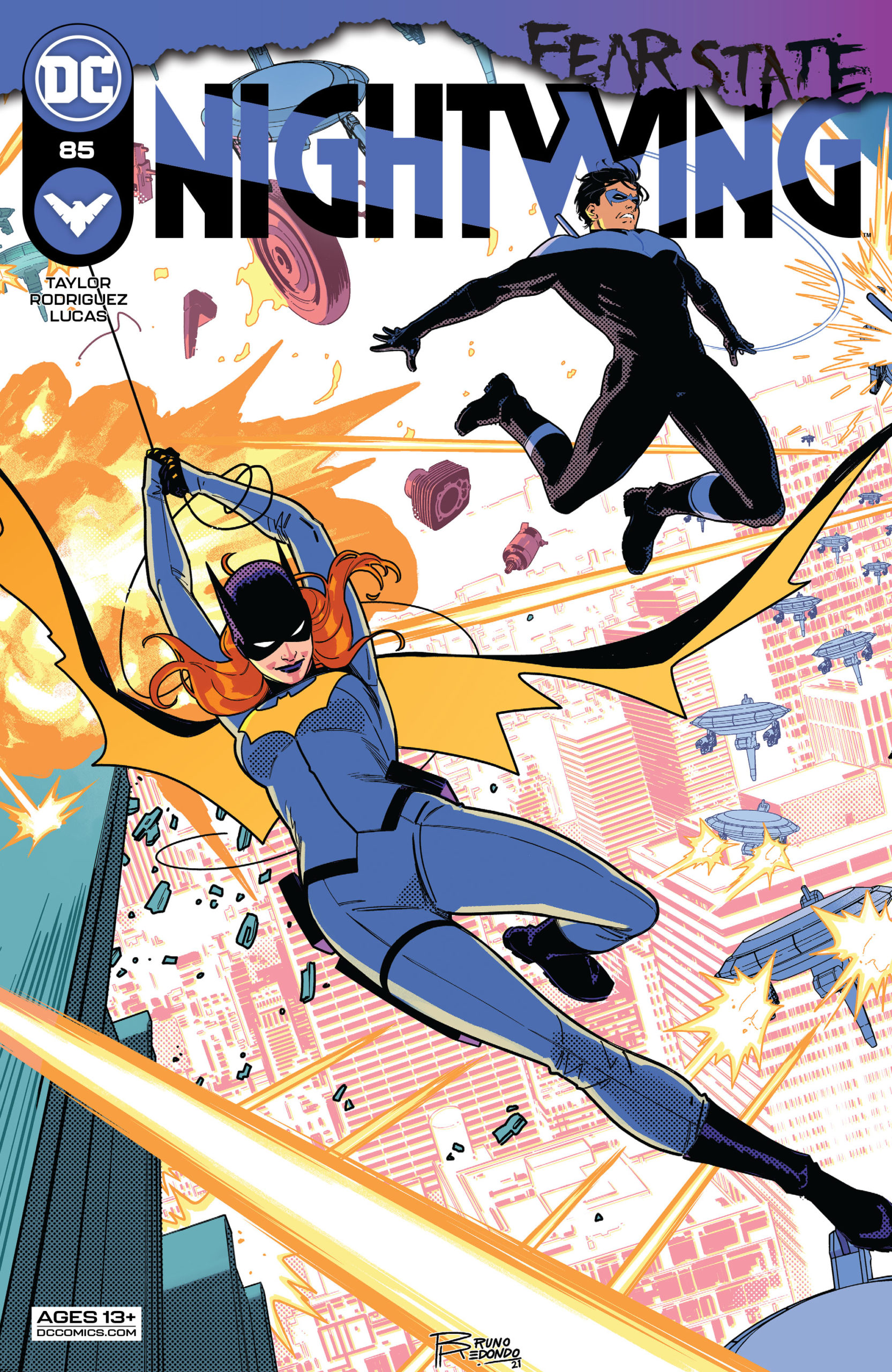 From its first page, Nightwing #85 grabs your attention and sets readers up for a whirlwind of an issue. This series is on fire right now.

Oracle has been hacked, and last month our titular hero was drawn into a trap which almost cost him his life, simply because he was called there by someone he believed to be Barbara Gordon. That was just the beginning, because in this issue “Fear State” kicks into full gear with Simon Saint and Jonathan Crane’s plans coming to terrifying, lethal fruition.

Scarecrow’s fear gas has always been one of the most disturbing weapons in any villains’ arsenal, both in comics and on-screen. Let me say right now that this issue has only increased my… admiration is the wrong word… sheer incredulous respect and terror for what it can do. This stuff has always fuelled my nightmares, but Tom Taylor, Robbi Rodriguez, Adriano Lucas and Wes Abbott have turned up the flames of hell big-style with their version. I’m not going to spoil anything here, but 2018’s Batman #55 came screaming back into my brain for all the wrong (right?) reasons.

Rodriguez and Lucas are awesome. Fact. Yes, I miss Bruno Redondo but Robbi and Adriano are producing such stellar visuals that many readers who aren’t as nerdy as I am may not even have noticed the change of line-artists. I’m loving Rodriguez’s take on Nightwing so much that I hope he not only finishes up this “Fear State” arc, but that he will get more guest appearances further down the line; if and when Mr. Redondo takes another break (which he may need after issue #87!)

Nightwing’s Escrima sticks put Bond’s gadgets to shame, and the fact that Tom Taylor still has new applications for both Robbi and Bruno to draw every issue is a source of constant joy. The fact that both talented illustrators are handling these like flat pack catalog instructions also makes me giggle every time.

Oh… and let’s not forget the cameos from some of DC Comics’ all-time greats. Somebody please give Robbi Rodriguez a regular gig! This guy draws every character brilliantly.

This is truly the Golden Age for comics color artists, and Adriano Lucas is in the upper echelon of my list of favorites (alongside Brad Anderson and Tomeu Morey). Look at this stuff! The neon lights, the reflections, flares, textures and effects this guy places on the page are worthy of being framed and hung in galleries everywhere. Trust me, if you pick up this issue your senses will be seriously stimulated.

Nightwing #85 does the brilliant job of continuing both the “Fear State” crossover, and the ongoing adventures of Dick Grayson and Barbara Gordon; who I’m so happy to see back in her Batgirl costume. The explosive conclusion to this issue also gives us a lovely cameo featuring Gotham’s other Batgirls, Stephanie Brown, and Cassandra Cain. Wait… did I say lovely? Stay tuned Bat-Fans, as I feel that the fireworks have only just begun.