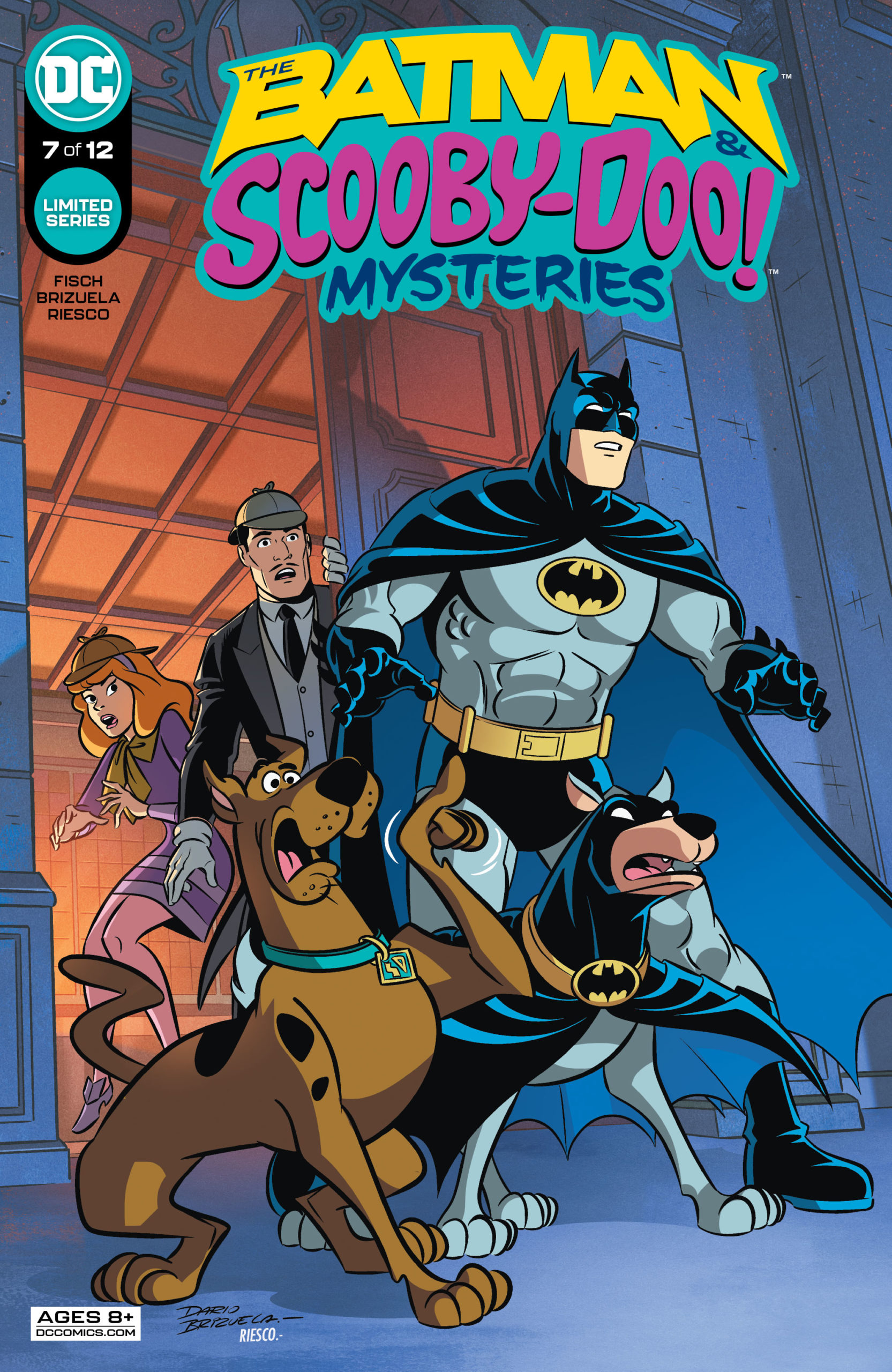 It’s hard to believe that we’re over halfway through this 12 issue run, but we are! The Batman & Scooby-Doo Mysteries #7 is here and we are ready to break it down. This issue saw the return of some previously introduced characters to the series, as well as some familiar feline-inspired “villains”.

It’s recommended, especially with this issue, to catch up on the previous comics in the series. Let’s dive in!

This issue revolved around the animals, with the story split between 3 groups: Daphne, Jenkins, and Alfred, Scooby and Ace (the secret Bat-Hound), and Batman and Robin alongside the rest of Mystery Inc.

Daphne, Jenkins, and Alfred spent time together at Wayne Manor, discussing both butlerss’ pasts and their experiences at butler school. Seeing as the two men are so fine and cultured, it isn’t surprising that they would have been schooled in the utmost best behavior. Scooby and Ace communicate with each other in an adjacent room of the manor through barks (a great detail!). Scooby’s surprised that there’s a second dog named Ace in Gotham City. Luckily for the Bat-Hound, the Great Dane doesn’t connect the dots to his secret identity. of course, they also go on their own separate adventure. The Mystery Gang with Batman and Robin face off with a giant cat and eventually run into a certain kitty acquaintance.

Unfortunately, although having so many storylines was fun, it made the comic difficult to keep up with at times. Additionally, there was no plot that was singled out as the main focal point of the story, even though each one eventually converged into a single arc. By the time they did, though, there were 10-12 characters on the page at the time and it became very jumbled.

With giant cats in the plot, it’s no spoiler to reveal that the antagonist in this issue is none other than… Catwoman! I was so excited to see such a powerful female character from the Batman universe. Nearly every iteration of Catwoman has been fabulous and inspirational. However, I was disappointed by her brief appearance here. I went through and counted and Selina Kyle only appeared in the issue in 10 frames. For her first time in this comic, why was her introduction so short?

After the Mystery Gang and the Bat duo stop Catwoman from following through with her chaotic plan, she ends up helping the heroes find and rescue the dogs. another villain with animal ties also makes an appearance, but he has even less screen time than Selina, and his story’s incredibly convoluted. I don’t know, this issue was a bit reaching for me.

Honestly, The Batman & Scooby-Doo Mysteries #7 could’ve been a lot better with just a few edits. The art style was inconsistent throughout the pages, many of the Scooby-Doo characters were drawn with overly thick outlines, and if a panel zoomed in on one of them, it became worse. This has always been a slight frustration of mine with this series, but it was even more pronounced in this issue. The Batman characters were drawn with reasonable outlines, but that only served to call attention to the overly thick lines of their Scooby-Doo counterparts.

Additionally, several speech bubbles’ sizes were altered somewhere throughout the creation process. This led to the letters looking different in some panels than usual and this also added to the uneven feel of the issue. The whole thing felt like it had been rushed or slapped together without much time to think, whether it was the art, letters, or story. However, Franco Riesco’s colors were on point and fantastic.

The Batman & Scooby-Doo Mysteries #7 had the potential to be an intriguing installment, in my opinion, however, the story was too convoluted to really excel. Readers were introduced to so many fun new details, such as Alfred’s past and the dogs’ ability to talk to one another that the plot became the background of the story. Details are fun, especially as they pertain to characters, but the story itself needs to be the main focus.

I’m probably being harsh, but this issue didn’t live up to its own previously set standards. Sholly Fisch’s stories have been hit or miss for me throughout the issues, however, the art and lettering were also disappointing this time around. Even for a series that isn’t taken as seriously as other Batman comics, we have to hope for better and more.

All the same, I’m excited for the next issue of The Batman & Scooby-Doo Mysteries, if only because things can only get better as the series comes to a close.