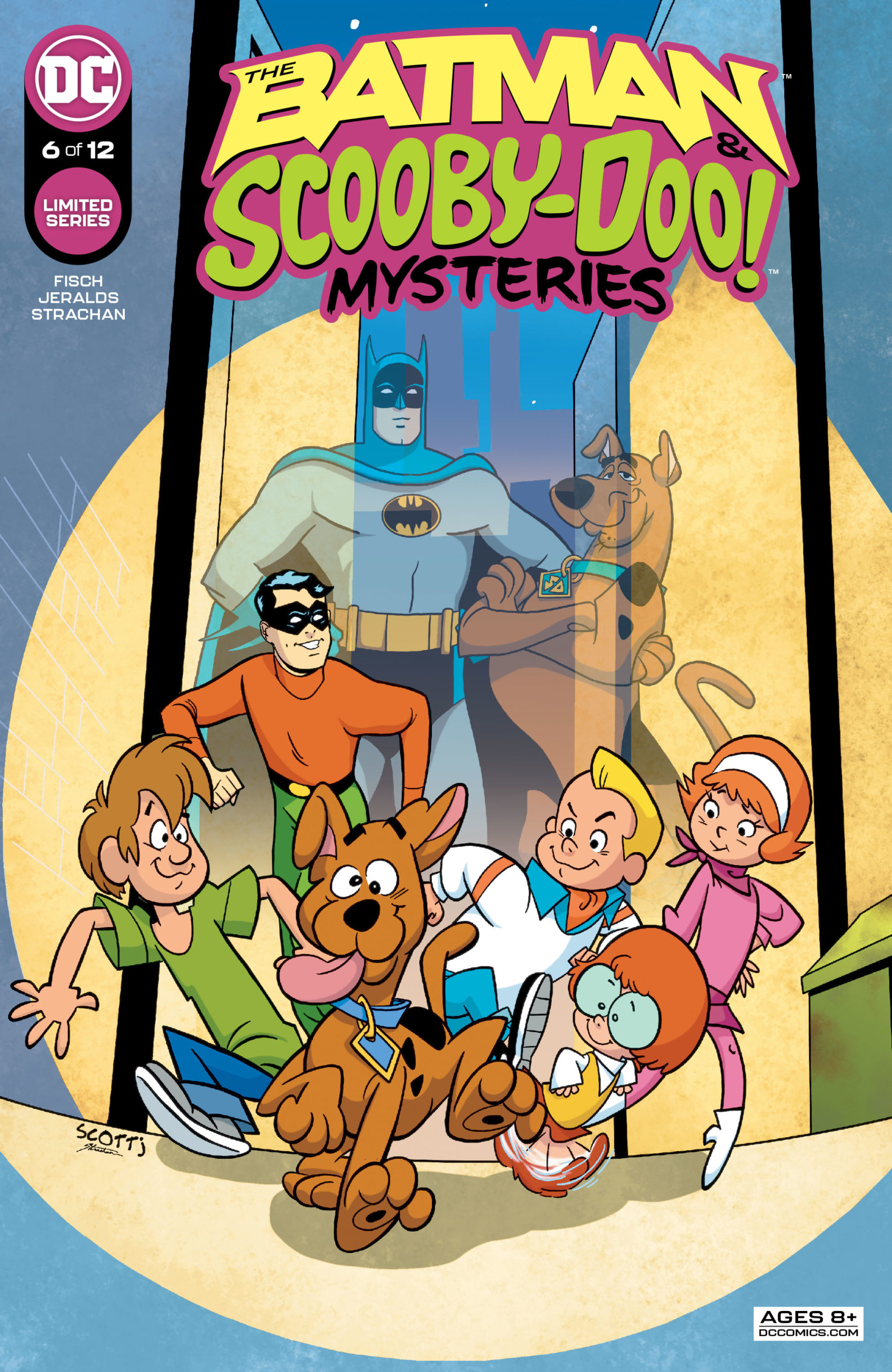 The Batman & Scooby-Doo Mysteries #6 sees our heroes solving crimes together, years before the first issue of this comic series. This story shows Bruce Wayne as a young Robin and the kid versions of Mystery Inc. working with their mutual mentor to solve a crime concerning monster men and the mob bosses of Gotham City.

I recommend catching up on previous issues of this comic if you haven’t yet, especially since we’re halfway through its run!

I was impressed with this issue’s art style. All of the young versions of the Mystery Gang were clearly lifted from their cartoon counterparts from “A Pup Named Scooby-Doo”. The colors were a bit altered to be more vibrant than their ’80s counterparts, but the characters felt incredibly familiar. Velma was even shown with her legs constantly in motion. There’s even one panel of Scooby walking that really showed, not just the silliness of the character, but the gangly limbs of a puppy. I thought this was an excellent depiction.

The adult versions of the characters seemed pretty much themselves and I thought their features were captured really well! The detail on Mystery Inc.’s facial expressions was excellent, and really showed Jeralds’ skill. I did note however that Daphne’s nose almost seemed to have a different shape, though I could have been wrong.

This new issue challenged a lot of previous lore and canon for both Batman and the Mystery Gang. First, Batman talks about how he’s had a passion for detective work and crime-solving since his youth. Bruce Wayne apparently helped a detective named Harvey Harris back in the day, although he gave himself the alias “Robin” at the time! Wayne wore a mask nearly identical to his sidekicks’ and donned the same colors, although in a more casual cosplay way. Fans of the classic Silver and Bronze Age Batman tales will get a kick out of this, as will anyone who loved The Untold Legend Of The Batman.

According to the Dark Knight of today, this was the first case he worked with Mystery Inc. Because all of the kids were trying to get training from Detective Harris, he brought them all with him on a case he was working on. The kids got underfoot, with many references to their history as mystery-solvers, while Wayne was relegated to being the babysitter of the group.

Ultimately, the team worked together and saved the day. Batman and Mystery Inc. learned invaluable lessons from each other and these experiences.

As a child, Daphne would often put her butler in danger, something Wayne insisted he would never do (fans know he would protect Alfred at all costs!). Wayne (as Robin) taught Daphne that she should try to help others without putting people at risk. Young Fred always looked to immediately allocate blame for crimes, but Harris taught him not to make assumptions about suspects and to follow the evidence. Velma shone as always and learned how to trust her instincts (saying “jinkies” no matter her age, however! Shaggy and Scooby learned a bit more about bravery, although that lesson might not have stuck.

Finally, Bruce Wayne learned about the importance of teamwork from Harris as well as how to look out for his friends and colleagues. In some ways, working with Mystery Inc. set Batman’s future with Robin, Nightwing, Batgirl, and Ace the Bat-Hound in motion.

This issue was pretty entertaining, although I do wish the art styles between the past and present were a bit more consistent. Heck, even the characters of the past were a bit odd when viewed all together in one scene.

I also felt that this issue taught a lot of important lessons to the main characters and to readers alike, but I had a slight problem with one of the messages. Towards the end of the story, Harvey Harris calls in back-up to support catching the mafia groups terrorizing Gotham City. Harris emphasizes the importance of calling in help and not working alone when saving the day. While this is essential, I found the comment a bit tone-deaf, since every single hero in the issue is white (other than dog Scooby, of course). The police can be trustworthy allies for some people, but I worry for children who might not get the same treatment just because they’re different.

All in all, however, this issue was a great callback to the Scooby-Doo canon of the past and established a fun backstory between some of the most famous crime-solvers in Western fiction. The next issue is sure to be a fun time as well! I also really look forward to seeing more art from Scott Jeralds and the dynamism he brings to his work.

What did you think of this issue? Should the comics include more callbacks to previous iterations of Batman or Mystery Inc.? Drop a comment below.

Batman: The Long Halloween Creators Talk About The Anniversary Special