A new preview for a Prime 1 Studios statue offers a detailed look at Robert Pattinson’s Dark Knight, as he’ll look in the upcoming movie, The Batman.

Nothing gets comic fans’ tongues wagging and fingers typing like new looks for classic heroes. This is especially true for a character like Batman. who’s been through multiple big and small screen iterations. Every actor, director and designer who signs on to a Batman project wants to put their stamp on the character and his world, to have something stick in the public consciousness multiple years and stories down the line. With Batman, the first things anyone is going to want to talk about will be the car and the costume. 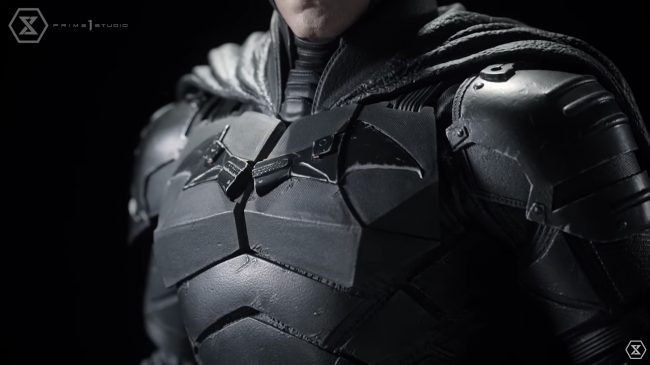 The Prime 1 Studio preview of their new products gives fans their most detailed look yet at Pattinson’s costume. Though there’s been speculation that the designers based their model on Jim Lee’s promotional art, not on the actual costume itself.

What strikes me most about this design is that, like the muscle car Batmobile, this costume seems to have a bit of a practical, cobbled-together look. This doesn’t feel like some fancy, seamless costume produced in a factory in Taiwan, but more like something soldered together piece by piece by one lonely guy and his butler.

This piece seems to have much more attention paid to function than form. The fasteners on the shoulder pads, the low, but evident cowboy collar and the pieced-together look of the bat emblem are where this is most evident. There are a lot of subtle differences that could hint at some larger characterization, or maybe this all a fake-out and there will be bat-nipples galore! Anyway, it’s still exciting that this new statue offers a detailed look at Robert Pattinson’s Batman. Here’s hoping it lives up to the hype!