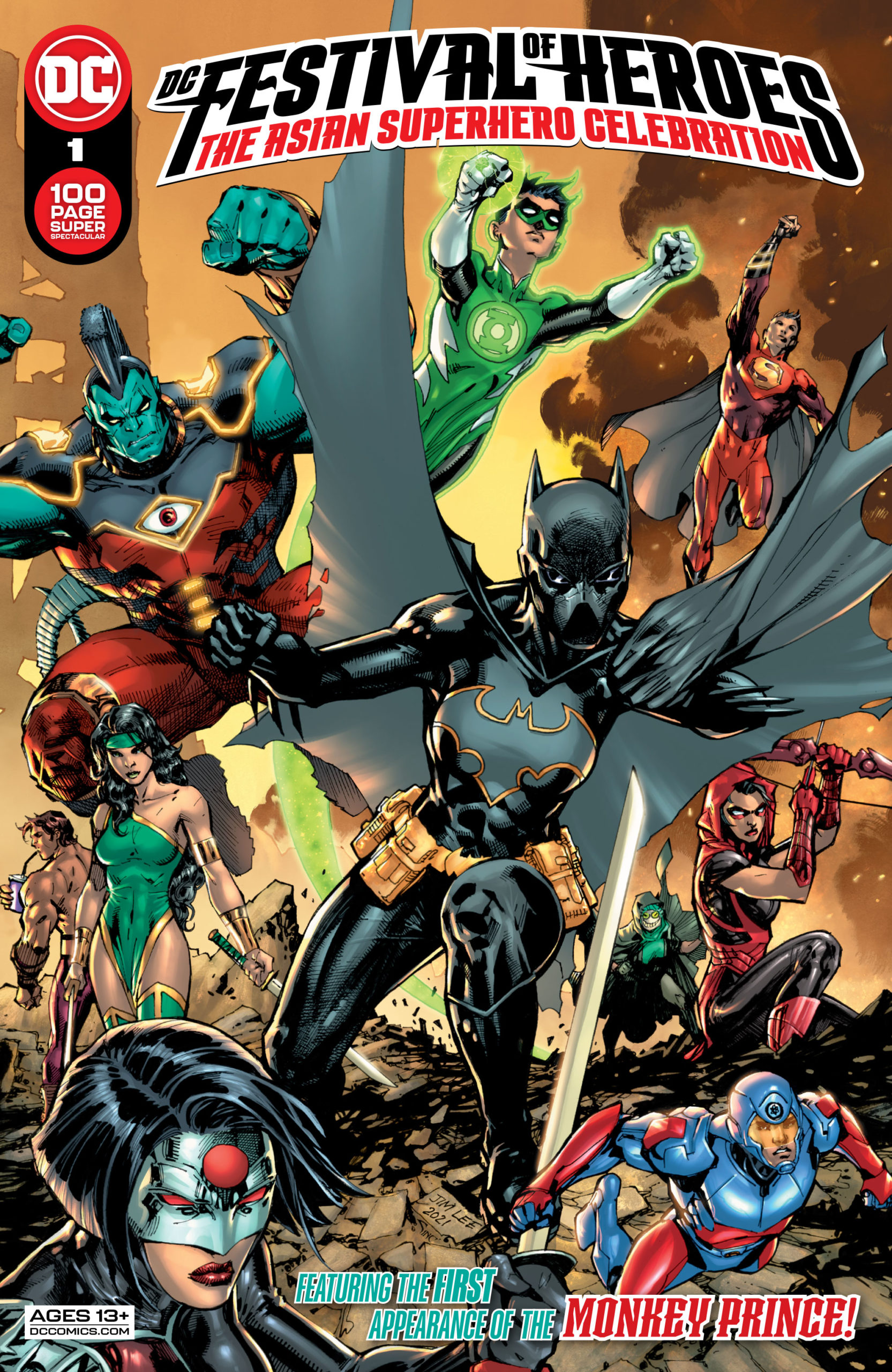 DC Festival of Heroes: The Asian Superhero Celebration #1 is a 96 page celebration of Asian Heritage Month with favorite Asian DC characters, both old and new. New being one of my favorite parts! This spotlight celebration is full of talent as well as great stories. So let’s dive into them!

In The Silence, I See Everything

The book starts fiercely. Our first story is “Sounds”  by Mariko Tamaki, Marcus To, Sebastian Cheng, and Janice Cheng.  The story is told from the POV of Cassandra Cain. With her as Batgirl and Barbara Gordon as Oracle, the ladies are on a mission to save Dr. Chin who has been kidnapped. Cass is fighting her own battle on the side, as she struggles to break through her Father’s training to find her words.  This is such a sweet story with amazing art.

Following that is “Dress Code” by Minh Le, Trung Le Nguyen, and Aditya Bidikar.  The story focuses on new Green Lantern Tai Pham and deals with the origin and importance of his costume; formally the áo dài, which is traditional in Vietnam. His Grandmother tells him “Why fit in when you can stand out?” and passes on a sense of pride. The story has quirky and fun artwork and delivers on emotional impact.

The next story “Hawke and Kong” is by Greg Pak, Sumit Kumar, Romulo Fajardo Jr., and Steve Wands. Connor Hawke, Green Arrow’s son, bumps into the New Superman, Kenan Kong. A Lexcorp Mecha Dragon needs taking care of and the pair work together in order to do so, while also protecting the people on the ground.  The full page spread of the Mecha Dragon is amazing and the heart-warming story about the sharing of culture and family is delightful.

In “Special Delivery” Aniz Adam Ansari, Sami Barsi, Sunny Gho, and Gabriela Downie deliver a short story featuring Damian Wayne. While his Father has given him the night off Damien is on the trail of someone devious enough to be taking out pizza delivery men. Damien proves in this story that he knows who he is, because of where he comes from. It is quite a touching short story.

We All Wear Masks

One of my favorite stories is “Masks” by  Ram V, Audrey Mok, Jordie Bellaire, and Tom Napolitano. This tale gives readers a glimpse into the world of Cheshire Cat, known to some as Shoes. This is a story about the struggle of finding oneself, it’s a very intimate story which show us tender moments with Selina Kyle, Catwoman, who has taken the young lady in. I look forward to learning more about Cheshire Cat and following her adventures in upcoming issues of Catwoman.

In “What’s In The Box?” Dustin Nguyen and Steve Wands give us a a short story featuring Abuse, AKA Colin Wilkes, and Cassandra Cain. This exquisite water color short story is about friendship and the importance of just being by someone’s side when they’re sad. Sometimes it just takes the sharing of a treat in silence. Beautifully done.

All In the Family

“Family Dinner” by Alyssa Wong, Sean Chen, Norm Rapmund, Rain Beredo, and Ariana Maker, is quite a treat. The story follows Grace Choi and Anissa Pierce, Thunder, as they are preparing for dinner with Anissa’s family. It’s always fun meeting the family right? The thing is that Anissa’s dad is none other than Jefferson Pierce, Black Lightning, and her sister is Jennifer Pierce, Lightning.  The tension’s broken by the Flinders siblings Baran and Selinda, also known as Mammoth and Shimmer respectively. This is a wonderfully told tale of acceptance and respect, that’s a joy to read.

On a much lighter note “Kawaii Kalamity” comes in all its cuteness, brought to readers by Sarah Kuhn, Victoria Ying, and Ariana Maher. The tale revolves around Emiko Queen, Red Arrow, fighting off the power of Kawaii. The sugary sweet singing squirrel is trying his best to have Emi-chan accept the cuteness into her life. While she does her best to fight off the adorableness issues, she comes to understand that it’s alright to accept all parts of ourselves. It’s a lovely story.

“Festival Of Heroes” by Amy Chu, Marcio Takara, Rain Beredo, and Gabriela Downie is most certainly not one to miss. This short story takes place at a cultural festival attended by Katana, Blue Beetle, and Cyborg. They’re there to help with the threats that have plagued the event; instances of intolerance and ignorance. The Knights of the Brotherhood show up sporting a chaos stone and the battle is on, one that includes more than just the heroes.

Next comes “Perceptible” by the team of Pornsak Pichetshote, Romulo Fajardo Jr., Alexandre Tefenkgi, and Aditya Bidikar. The Atom is fighting atop a hypothalamus against a booby trapped bacterium, created for someone with specific DNA. this is a story about how small actions can have big consequences and, more than that, it shows that heroes don’t always have the answers to the hard questions.

Saving My Favorite For Last

The last story in DC Festival of Heroes: The Asian Superhero Celebration #1 is one I’ve not only been excited to see, but one that holds a very special place in my heart; for the characters depicted and the legends it comes from. This is because it features the son of Sun Wukong, better known as The Monkey King. Wukong is a mythical figure best known as one of the main characters in the 16th-century Chinese novel Journey to the West, which has been adapted into TV and movies over the decades, of which I’ve seen almost all.

For “The Monkey Prince Hates Superheroes”, Gene Luen Yang, Bernard Chang, Sebastian Cheng, Janice Cheng, and Jessica Chen give us the whole package. The story starts out with Dr. Sivana and his minions getting ready to sacrifice Shazam. At least that is the way it seems.

We meet The Monkey Prince’s Shifu, Zhui Bajie, one of the four who traveled with the Monk Xuanzang on his journey to the west. Brother to Sun Wukong and the one keeping an eye on The Monkey Prince, when things go a bit nuts.

The twist for Marcus, the name of our human/Monkey Prince, is such an unexpected but intriguing one. I’m loving the modern take used in this introduction to the character and believe that I’ll be reading the series when it comes out, later this year.

Please read DC Festival of Heroes: The Asian Superhero Celebration #1, but not only because it’s a celebration of the Asian Heritage. These stories showcase so many amazing things from the community and, in some cases, provide readers with a delightful learning experience for both young and old.

I wish I could give higher marks, but my review alone honestly states my love for this one. This book’s definitely one to grab!