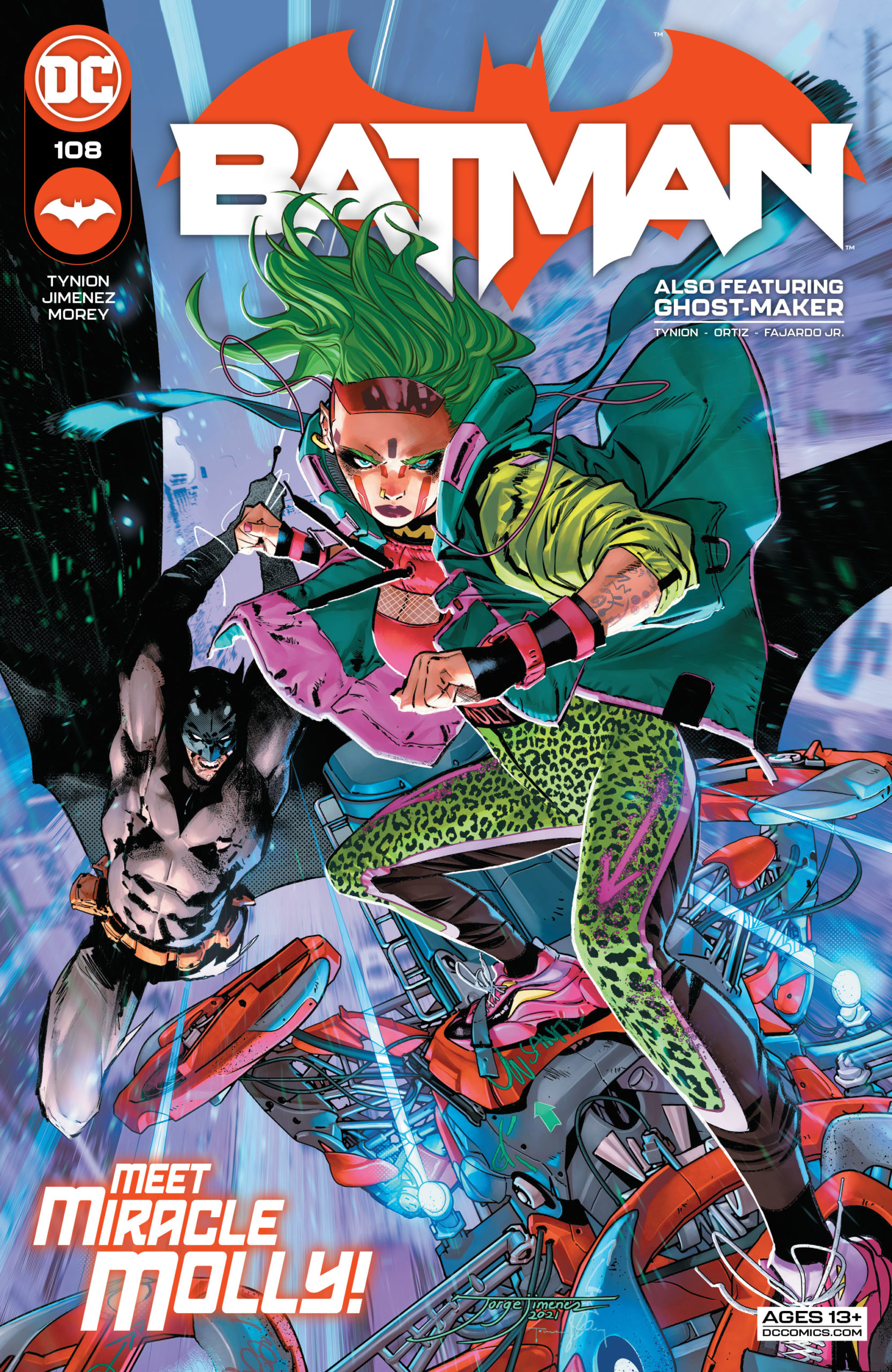 Introducing an intriguing new character, getting a major identity reveal of a key player from the Future State era and more bonus Ghost-Maker content; Batman #108 certainly offers value for money! Packing a lot into its 32 pages, this issue thickens the plot… and then some.

James Tynion is expertly pulling together many disparate threads into a cohesive whole, across two different timelines. Whilst our pre-set knowledge of “Future State” could serve to lessen the impact of events here, what we get in this issue somehow doesn’t feel like that.

Speaking of impact, Tynion treats us to a major reveal, as the true identity of Peacekeeper 01 is finally uncovered and his enmity for the Caped Crusader is explained. This is a character with not merely a chip on his shoulder, but rather several portions of Big Mac & Fries. His hatred feels very well placed. As always, no spoilers in this review, but it’s safe to say, that as with all the best antagonists, one cannot avoid feeling a degree of empathy and sympathy for this wretched fellow. Having been through the grinder to this extent, I think my own outlook on law and order would be very similar.

Every villain is the hero of their own story and Peacekeeper-01 definitely fits in that wheelhouse. This retroactively gives more substance to the events of Future State,  which only helps to enrich that event.

I Believe In Miracles

A new addition to the proceedings is the character of Miracle Molly. A dayglo explosion of colour, who feels like an interesting hybrid of WWE’s Alexa Bliss and a street urchin, it seems like this new character could have some mileage. Seeing right through Bruce’s tried and trusted Matches Malone visage, this is one smart cookie! 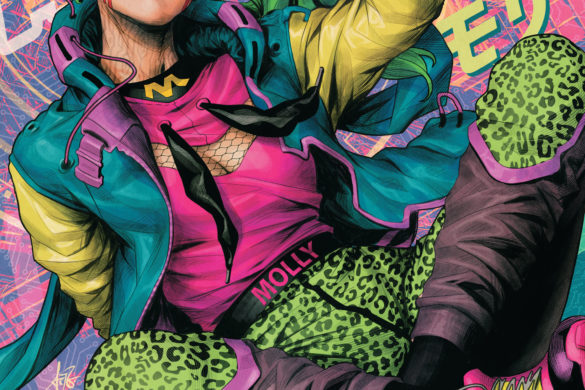 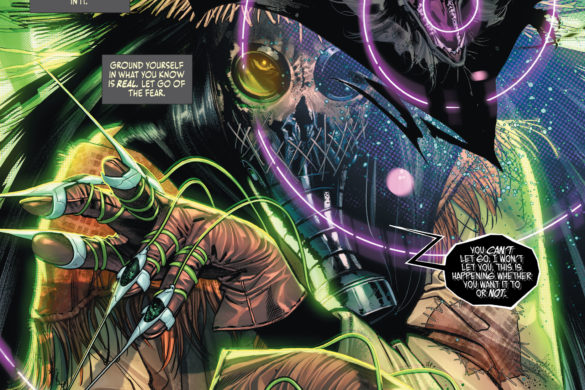 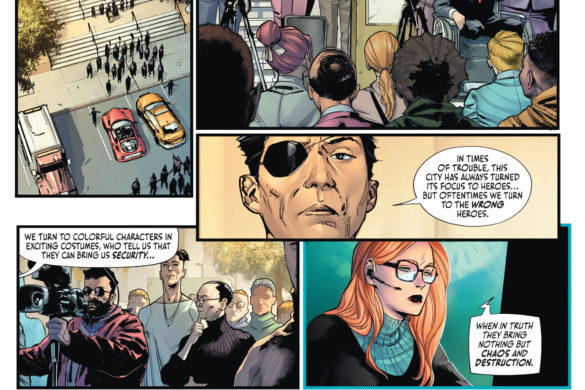 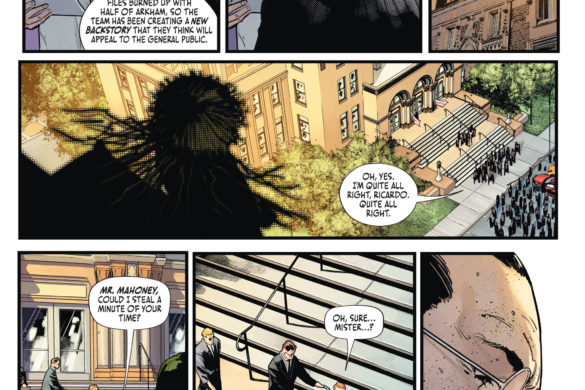 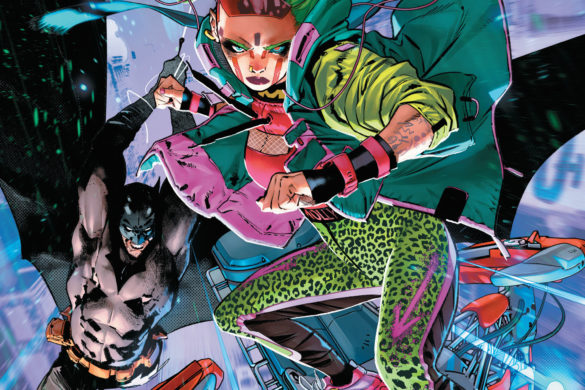 Her true motivations aren’t 100% clear; is she a villain or something more? Either way, there’s a lot more here than meets the eye. Yes, she may be the genius engineer behind the Unsanity Collective’s mind- and body-altering tech, designed to create the perfect soldiers, but there appears to be a more altruistic side to her too. Taking Bruce on an odyssey through the city, her pitch of a new vision almost seems rational and logical to me.

Tynion’s explanation below certainly gives this reader food for thought.

The reason [Batman] puts on the costume is because criminals are a superstitious and cowardly lot. And one of the big things that Miracle Molly says to him in this issue is that it’s not just the criminals. Everyone in Gotham is a superstitious and cowardly lot. Society kind of pushes us into that position. The idea of the Unsanity Collective is that they erase part of their memories so they can let go of the traumas of their past, let go of who society wanted them to be, and they’re able to rebuild themselves from scratch as these new people.

As always, Batman #108 is a feast for the eyes. The art team of Jimenez, Morey and Cowles is a match made in heaven. If you like vibrant, detailed, colourful and kinetic artwork, then you will be well served here. Every page is so eye-catching, so involved and so demanding of your attention. A perfect compliment to Tynion’s narrative, this run feels like prime-era Batman. Everybody has their favourites, from runs they prefer, but I do feel as though this one will take its place in the pantheon of Batman classics.

Once again, there’s a bonus story to be enjoyed, as Ghost-Maker’s adventures on Devil-Skull Island continue. It’s interesting to see such a stoic character depicted in a story that’s lighter in tone and higher in concept. A quasi 007-esque adventure, it is shaping up to be an enjoyable romp. Showcasing a lighter side to the character, it helps to flesh him out and show his versatility, which can only help to give Ghost-Maker more longevity.

Batman #108 is an issue packed with a lot of moving parts. Picking up the pace from the more languid #107, Tynion now looks to have all his chess pieces in their correct positions. Where the endgame will take us remains to be seen, but I know it’s going to be absorbing, engrossing and a must-read.