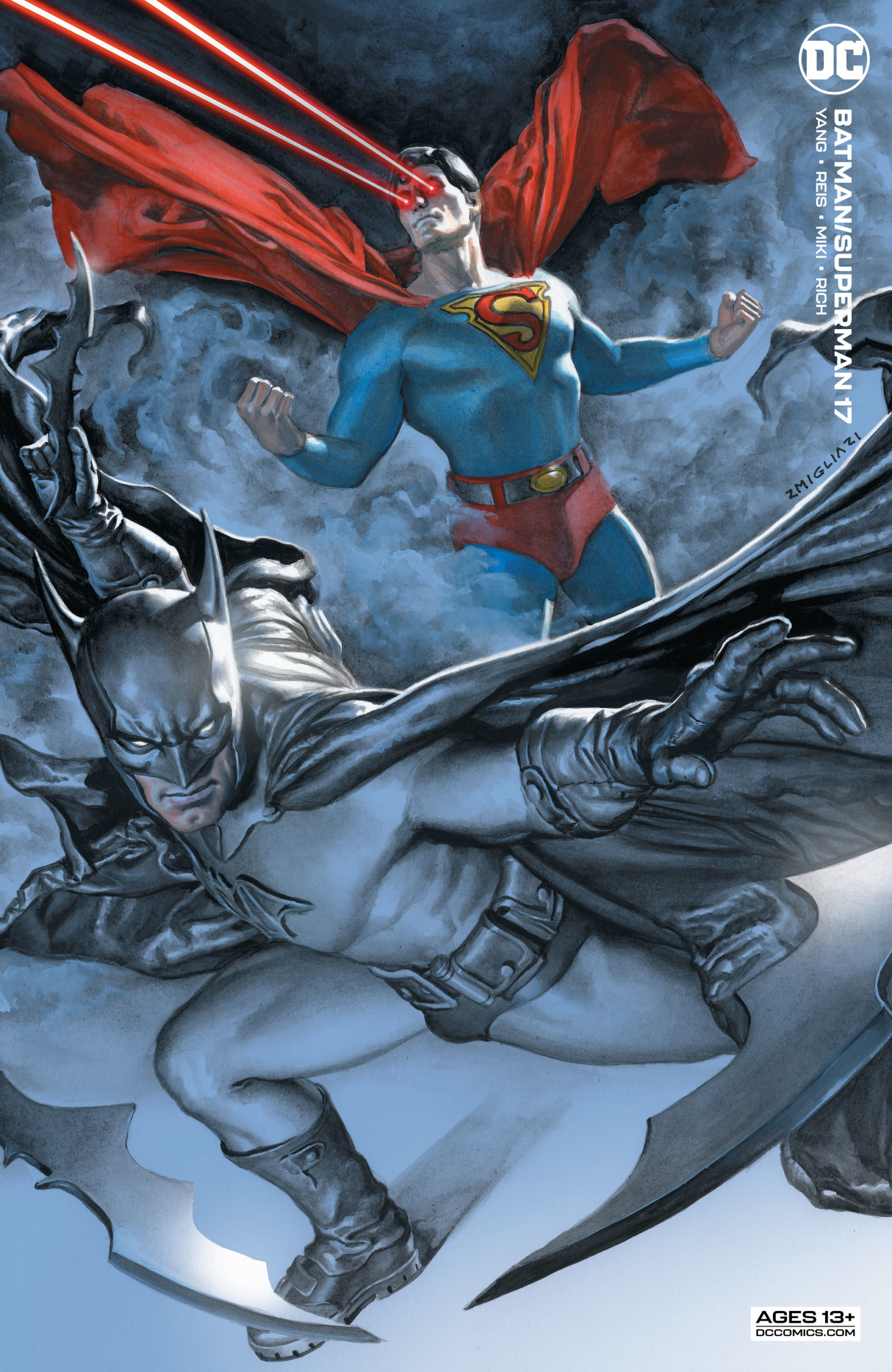 DC’s A-list duo find themselves in an A-list blockbuster film, as the World’s Finest Team faces off against a new villain, in this week’s Batman/Superman #17.

After last month’s utterly baffling (yet wonderfully brilliant) Batman/Superman #16, this week’s issue answers a lot of questions. The story opens on Earth-0, with Batman and Superman punching their way into a satellite that’s been taken over by an android calling himself Auteru.10. Apparently, this satellite has become the “archive of worlds” and Auteru.10 rules over various different realities that exist in the form of film strips.

Meanwhile, Superman from “The World of Tomorrow” and Batman from “The World of the Knight” meet each other for the first time. Last issue, a hole was burnt open allowing Superman and Lois to move from their own cinematic world to Batman’s. Needless to say, there’s much confusion when Batman recognizes Lois as his world’s Spider Lady. Shenanigans ensue.

Gene Luen Yang once again delivers an excellent script, full of clever meta-humor. I’m specifically thinking about his villain, Auteru.10. In many ways, it feels like Yang is poking fun at toxic fandom – more specifically, fans who weaponize their personal tastes by denigrating anyone who disagrees with them. You know who I’m talking about – the dude (usually a middle-aged white guy) who starts stupid fights on social media over the most asinine aspects of superhero films, that usually end up with expletives and insults galore. This robo-film-junkie resembles toxic fandom’s obsessive nature, as he’s determined to do the impossible: create the perfect movie. 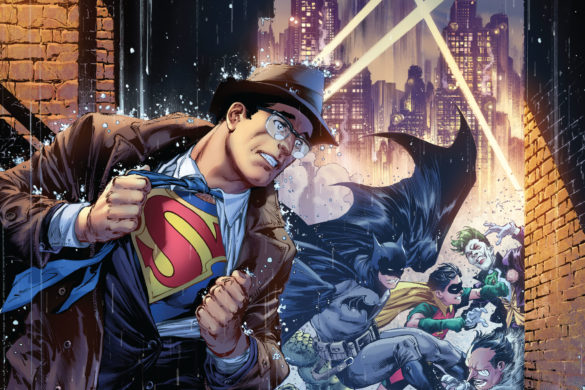 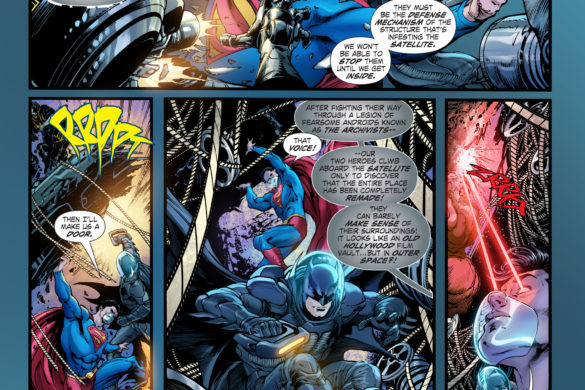 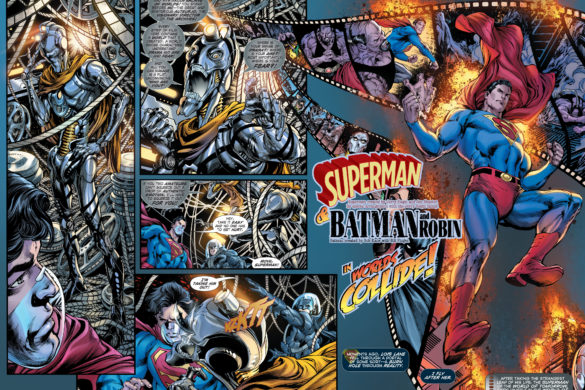 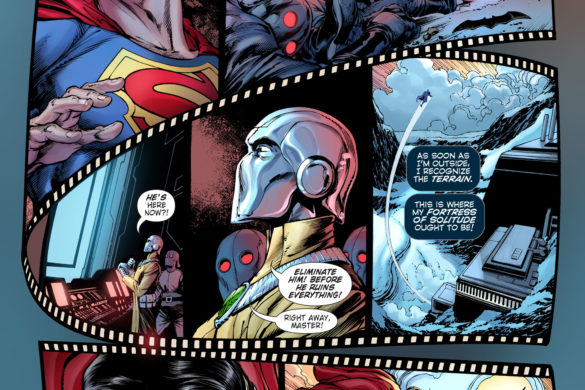 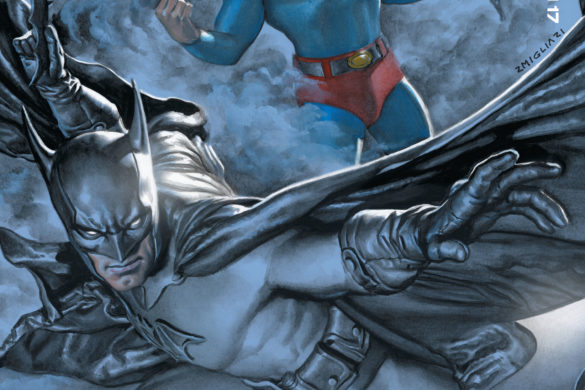 Anyway, the meta-framework for this story arc works really well, as the connection between the two mediums couldn’t be more obvious. While there are some very basics connections, like the fact that both comics and film are visual mediums, Yang pushes his metaphor further as his story unfolds.

For many years superhero films were siloed into their own franchises – just like Batman/Superman #16. However, when Iron Man hit the screen, superhero movies all of a sudden began to emulate their source material, establishing a shared universe on the silver screen. Again, Yang plays with this idea when he has these cinematic versions of Batman and Superman meet for the first time. Things get even more bananas when the writer introduces “the archive of worlds” concept: a DC Cinematic Multiverse that exists inside Earth-0. The concept is so simple it’s absolutely genius.

A Movie on Paper

Unsurprisingly, Ivan Reis and Danny Miki’s art is fantastic. What’s particularly impressive about Reis’ work is that he has a great grasp of what Yang is trying to accomplish in his script. Reis leans into the film aesthetic, wrapping his panels in a trim that emulates film. Moreover, he even visually gets the meta-concepts that Yang introduces. At one point, the cinematic Superman starts becoming self-aware, realizing that there is something unusual about his reality. So he uses his heat vision to burn a hole into his reality’s film, creating a portal to Earth-0. This scene really drives home Yang’s Cinematic Multiverse concept, as he uses a visual vocabulary that merges form and content.

Batman/Superman #17 is spectacular. Yang’s script is playful and clever. Reis’s pencils are sharp and intentional. This is one of those books that perfectly captures the pop-cultural zeitgeist, as superheroes have pretty much dominated the box office for more than a decade.  If this arc continues at this level of quality, “World’s Collide” might just be a masterpiece.

Final Verdict: I’m running out of superlatives to describe this story.