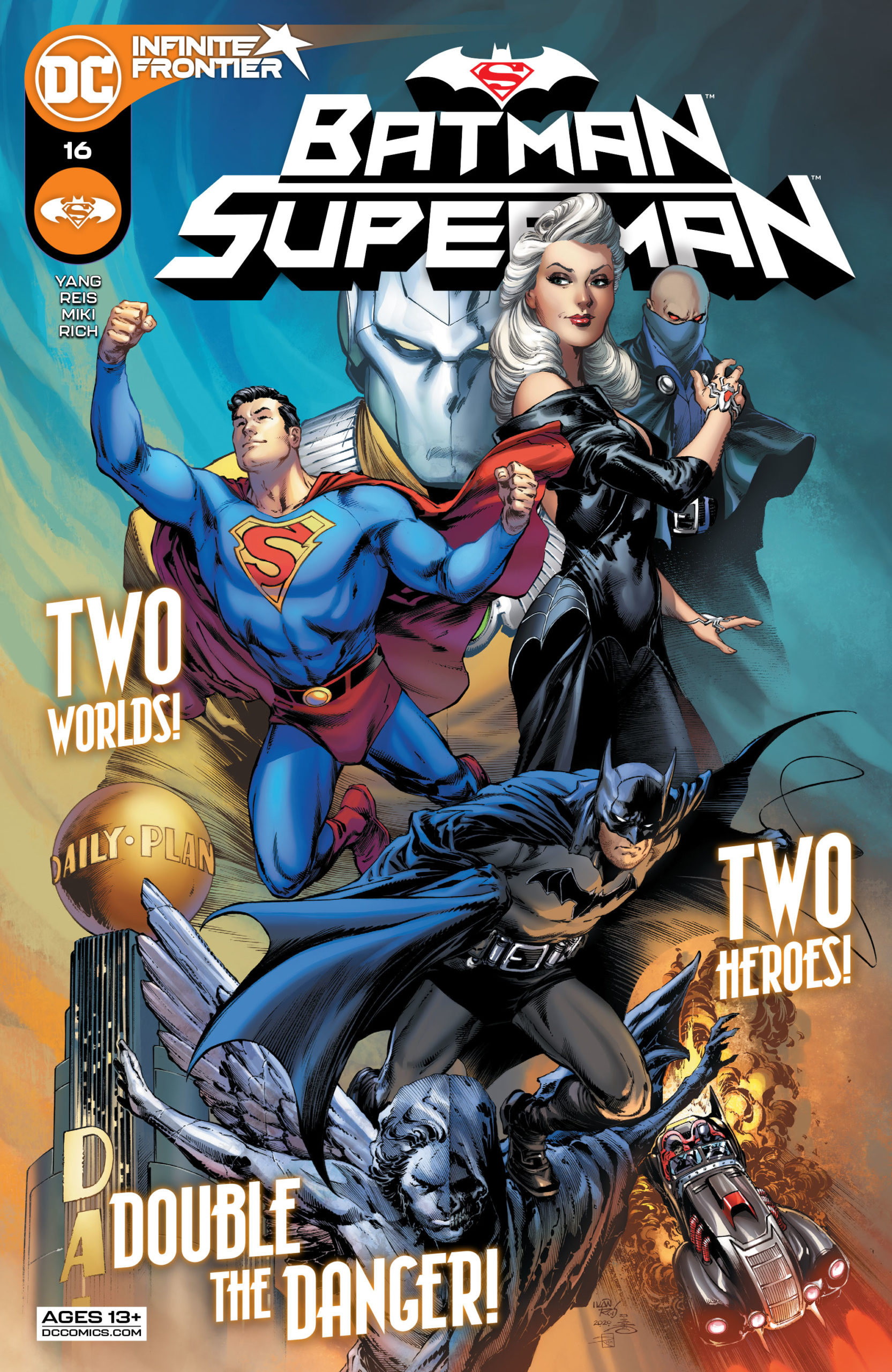 Comics and movies collide, as the World’s Finest team finds itself on the silver screen, in this week’s Batman/Superman #16.

This issue feels like a movie double bill, with Batman and Superman starring in their own feature presentation. In “The World of Tomorrow”, Superman squares off against the mysterious Unknown Wizard, who attempts to sabotage Metropolis’s Omni-Battery – a new technology that could provide a never-ending source of energy for the city. Meanwhile, in “The World of the Knight”, Batman confronts a group of Arkham escapees led by the Spider Lady – a villain who may be new to comics, but who actually has roots in the 1948 Superman serials.

From the get-go, readers will note that there’s something strange about these stories too. While each of these tales channel a certain classic, retro sensibility, their plot beats, and character status quos are utterly foreign to what we’ve been accustomed to, in terms of continuity. Therefore, it becomes apparent quickly that Yang isn’t directly dealing with the Infinite Frontier continuity.  It’s also worth noting that each of these stories is framed as a movie (more on that later), so readers will be left to wonder how they relate to the current status quo.

Ivan Reis’ pencils for Batman/Superman #17 are, unsurprisingly, gorgeous. Reis – a long-time DC veteran – brings a classic  Golden Age, Deco Punk aesthetic to the issue.  Superman’s crest is the golden-age shield, while Lois, Jimmy, and Clark look like they’ve walked out of a 1940s fashion magazine. Batman’s costume doesn’t look exactly like his original, but there’s enough homage to it, that it’s clear this isn’t today’s Batman. Also, Robin (Dick Grayson) is sporting his classic green short pants, once again driving home the point that this is a tale from a different age. 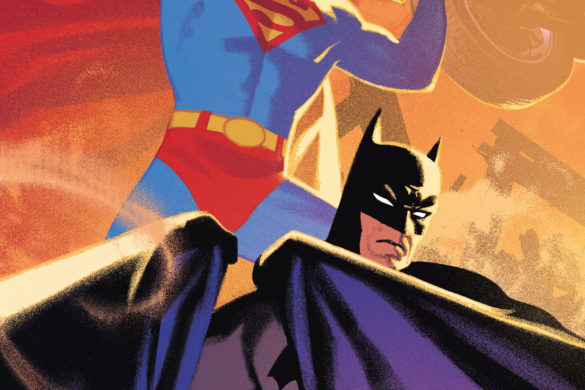 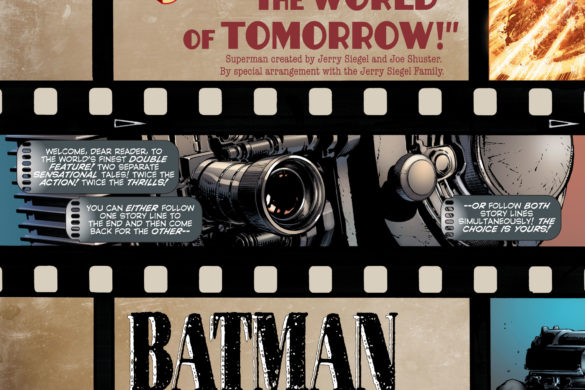 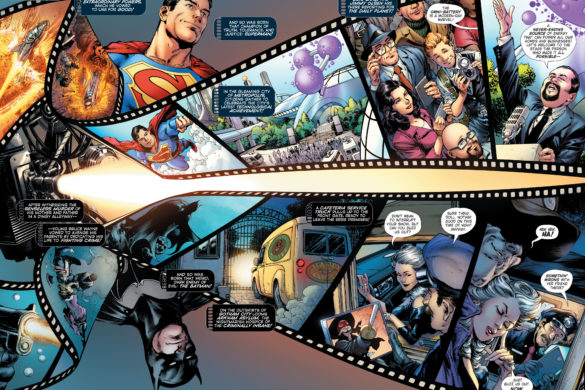 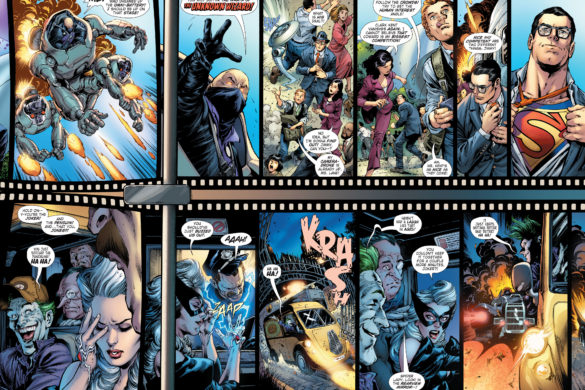 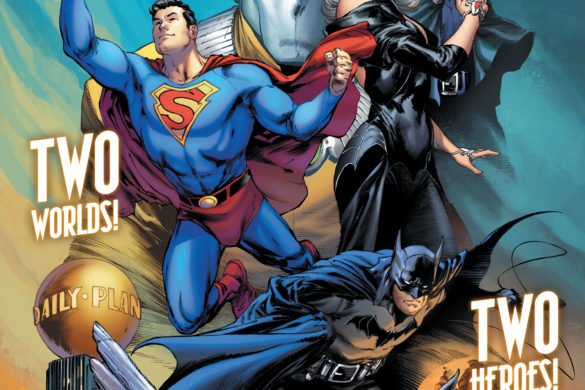 Amidst all of the retro designs, what really emphasizes the cinematic theme of this issue is Reis’ paneling. In the gutter of the first two pages, Reis has an old film projector, which signals to the reader that they are watching a film. Then moving forward, each panel is framed as a film-reel shot. Batman/Superman #17 is literally a movie-made-comic. This is a fantastic visual effect that really creates a unique reading experience.

That being said – there are some potential drawbacks to this format. Each of the panels are incredibly small, so the beauty of Reis’ work is somewhat lost, also – there’s not much variety in panel shapes. Essentially, each one is either a small vertical rectangle, or a small horizontal rectangle. Therefore, there’s potential for visual monotony.

Overall, I actually liked the visual style, despite my aforementioned criticisms. Mind you – I read this issue digitally, which means I could access the guided-view feature of my Comixology app. This enlarges each panel to the size of my tablet screen. Therefore, I was able to appreciate both the layout of the page as well as each individual panel’s incredible details. Frankly though, I’m not sure how well this issue works as a physical copy, simply due to the size of the panels.

Batman/Superman #16 is a fantastic start to the Yang/Reis run on the title. It’s also an improvement over Yang’s two Future State issues. In fact, this issue confirms what I had suspected about Yang as a writer: when contained by editorial mandates, Yang struggles to deliver. However, when given space and freedom to write the story he wants, he can produce excellent work. Also, Reis was an excellent choice for this project, as he does a great job visually complimenting Yang’s ideas. I’m very excited to see what these two have in store in the months to come.

Final Verdict: Batman/Superman #16 is innovative, fun, and definitely worth your time.