“Leaping Into The Light” – Part Two 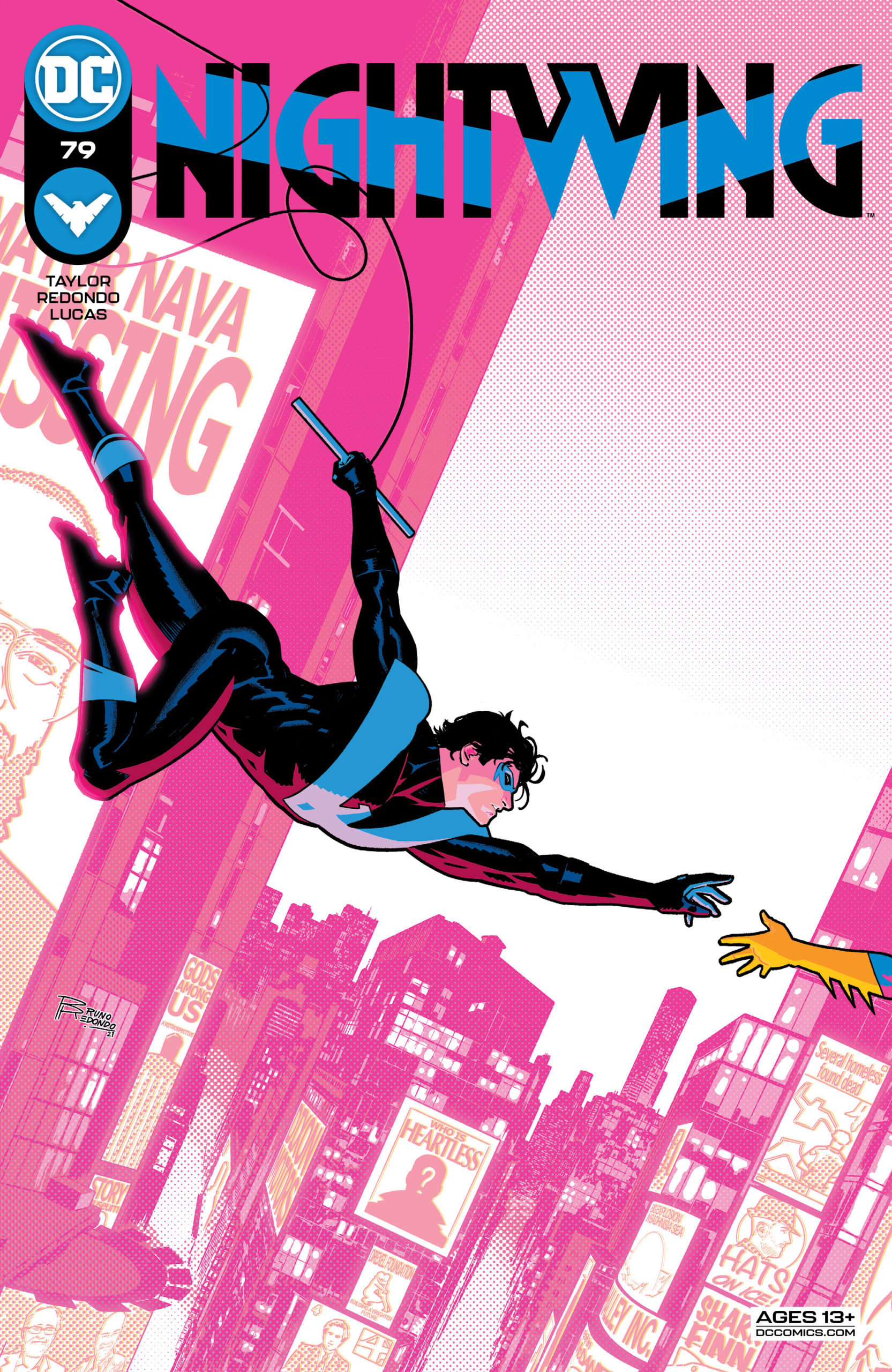 Nightwing #79 is a dream of a comic, even though Blüdhaven’s a nightmare. The city only got worse when Dick Grayson “wasn’t quite himself”, and – if what we see in this issue is anything to go by – the city will be a lot tougher to clean up now, than it ever was in the past.

Last month Tom Taylor reduced me to tears, and this month he had me rolling with laughter. Seeing Dick and Barbara going out for pizza to Marv and George’s made me so happy. Long-standing fans will get a kick out of this, and new readers just need to add the surnames Wolfman and Perez to those first names, in order to share in the smiles, and receive a healthy slice of nostalgia to go with their pizza. The fact that Mr Perez also seems to be the one handing out the tasty treats – just like he’s delivered thousands of beautiful comics pages in the past – made this aging fanboy grin like the Joker on nitrous oxide.

I’m loving the action, the humor, and the wonderful dialogue in his book. Dick and Babs feel so real, so close, and so human. Add in pieces of brilliance like the Bat-Family group chat, feeding the homeless, gangsters, aerial acrobatics, and a scary new villain – who really is a heartbreaker – and the end result is runaway winner of a comic-book. 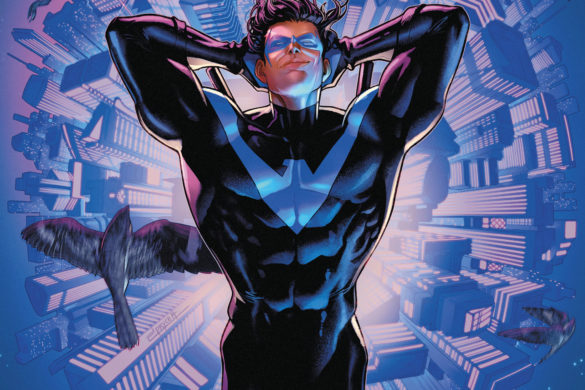 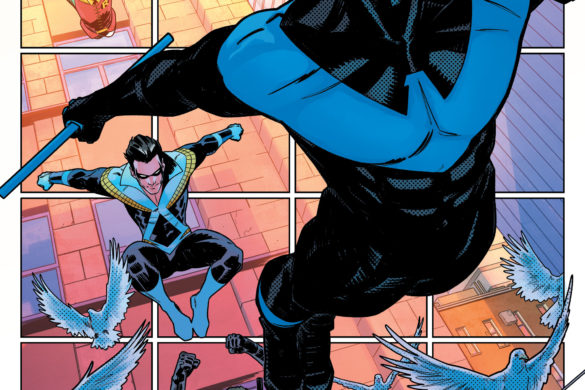 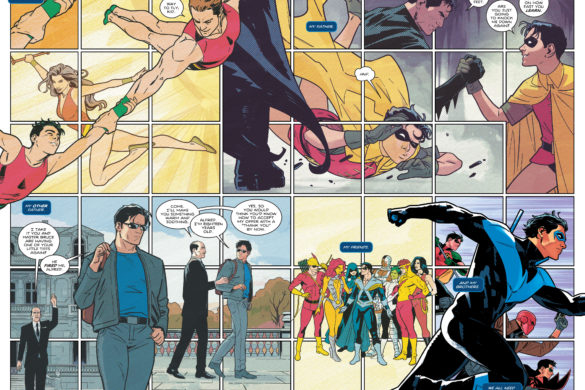 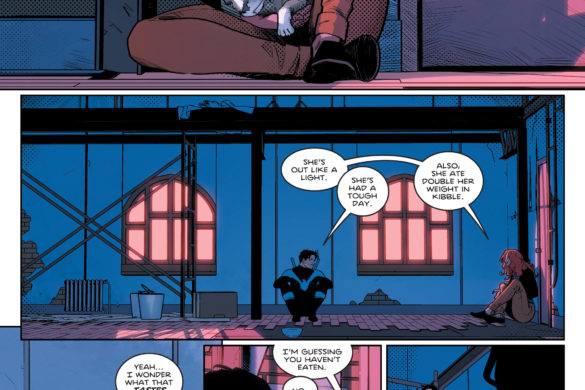 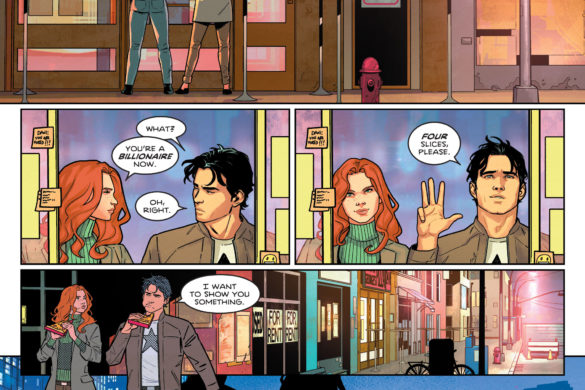 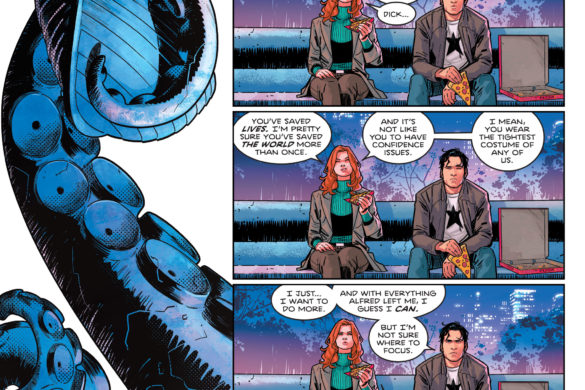 In the space of just two issues, Bruno Redondo has joined the illustrious list already populated by Scott McDaniel, Travis Moore and George Perez, as a contender for greatest Dick Grayson/Nightwing artist of all time. Look at this stuff! The opening splash, followed by the stroll down Dick’s personal Memory Lane, are just gorgeous. Oh, and there’s a double page spread later in the issue which would make Richard and Mary proud to see how awesomely their own little Flying Grayson has grown up.

It’s not just the action that kicks butt, though. Tom Taylor has cleverly opened the book, and grabbed the reader’s attention, with two action packed pages, but Bruno and Adriano keep us engaged with the quiet, conversation filled pages that follow. Their beautiful lighting, expressive faces, and spot-on realistic body language, match Taylor’s incredible dialogue.

Adriano Lucas’ colors pack a punch, and are the perfect partner to Bruno’s line-art, and everyone knows Wes Abbott’s a terrific letterer.

I’ve loved Dick Grayson and Barbara Gordon for most of my life, and I’m now falling madly in love with the incredible creative team that’s now charting the course of their adventures. This series has always been near the top of my first reads of the week pile, but Nightwing #79, and its predecessor, have moved it to the summit.

If you haven’t read this series before, now’s the time. Pick this book up, you won’t regret it.