This is it, guys. This is the endgame for many DC and Zack Snyder fanboys. In a little over a month, we’ll finally be able to see the Justice League that Zack Snyder intended, when he first took the reins of the DC Extended Universe, all those years ago. The #SnyderCut will be premiering on HBO Max in a four-hour film format on March 18. In the meantime, Snyder is reveling in all the hype and anticipation by teasing his Vero followers with a shot of Knightmare Batman in the #SnyderCut.

The return of Knightmare Batman?

One of the dangling plot threads that we never saw a conclusion to was the strange vision that Batfleck had in Batman v Superman: Dawn of Justice. In the flick, Bats nodded off in the Batcave and had a realistic dream of himself in a post-apocalyptic wasteland. His vision depicted himself committing the fashion faux pas of wearing a heavy khaki trenchcoat over his Batsuit. (While it looks insanely silly to me personally, you have to admit it’s impractical considering there are towering infernos off in the distance. I suppose Batfleck is immune to heatstroke.) In the vision, after being ambushed, he attempts to dispatch a group of soldiers bearing Supes’ S-crest. With an assist from a horde of Parademons, they are eventually able to overwhelm him. Bats is captured and faces a very angry Superman who accuses Bats of taking “his world.”

Take a look at the scene below:

Snyder obviously meant to set up an overarching plot that would lead into JL, but unfortunately, that didn’t come to fruition. Snyder left the production of JL and Warner Bros. intervened and completely redid the movie. Apparently, Snyder is ready to complete that thread in the #SnyderCut. Recently on Vero, Snyder teased a photo of Knightmare Batman in the #SnyderCut.

Did Bats take his world? 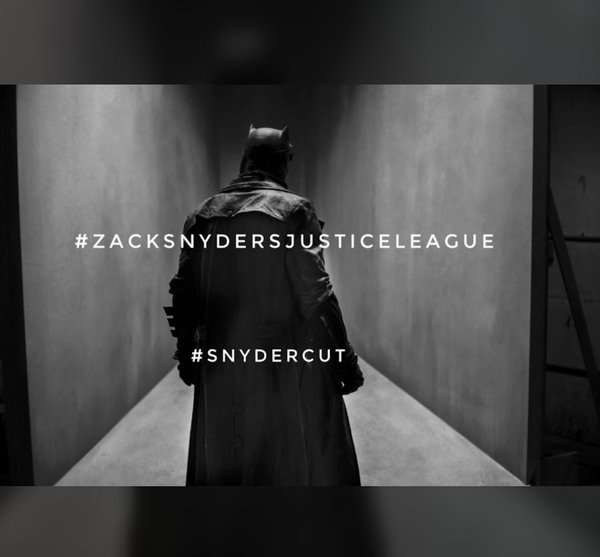 Though it’s in black and white, it’s pretty clear that it’s Batfleck clad in that heavy leather trenchcoat. He’s standing in an empty corridor that looks similar to the hallway that Supes lands in, and marches down. It’s either my eyes or deceiving me or the texture of the walls in both scenes are identical. Unfortunately, there isn’t any more to gather from the photo.

Will Bruce have another vision? Or will the movie perform a time skip and we’ll be able to see Bats battle this Mad Max-style wasteland?