As comic book fans, we collect – some consider hoard – lots of rare and valuable comic books. Of course, there are the insanely soughtafter “holy grails” that we can only ever dream of seeing, much less ever owning. I’m sure there are a few that comes to mind, but the big one concerning this fanbase is Detective Comics #27, the first appearance of Batman. The issue that brought to life one of the most enduring fictional characters in history. The book was published in 1939, so Batman is now a character who just recently celebrated 81 years consistent publication. Well, one of the few surviving copies of Detective Comics #27 recently came up for auction and sold for $850,000. 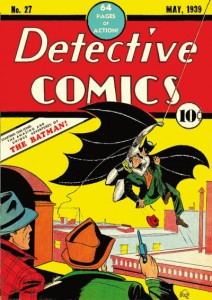 One of the remaining 70 copies from 1939 recently appeared at auction through ComicConnect, selling for $849,999.90. (Yes, we’re rounding up, but that’s a pretty strange number to put in a headline, no?) This sale is the second highest ever paid for this issue, making it on a list of biggest comic book sales in history. This copy was graded 6.0 out of 10.0 by the Certified Guaranty Company (CGC), meaning that it was in decent shape… especially considering a comic that’s over 80 years old.

For comparison, the highest price ever paid for Detective #27 is a monstrous $1,075,500. As expected, that issue was in much better condition with a crazy CGC grading of 8.0. Of course, I can’t complete an article about comic book sales without the record-breaking sale of Action Comics #1, which went for $1,500,000. Currently, that sale is the highest ever for any comic book sale, for the time being. Let’s see if anyone will ever be insane enough to pay more for a comic book.

While I am a collector, I personally prefer weird, uncommon items that aren’t necessarily valuable. One of my favorite possessions is a Batman: The Animated Series-branded lip balm from the ’90s. I purchased it in a toy shop in Tokyo for about $6. Best purchase of my life.

So, if I ever hit the lottery and happen upon a Detective #27, I would admire it, feel its power, read it, and sell it, because an old comic book isn’t going to improve my life… but $850,000 will. Yeah, I know, blasphemy, right? I’m just being pragmatic, folks. With $850,000, you can buy at least a couple of houses, among other things that will dramatically change my life. Perhaps more B:TAS branded lip balm.

What do you think? Would you keep a copy of Detective Comics #27 or would you sell it? Let me know.