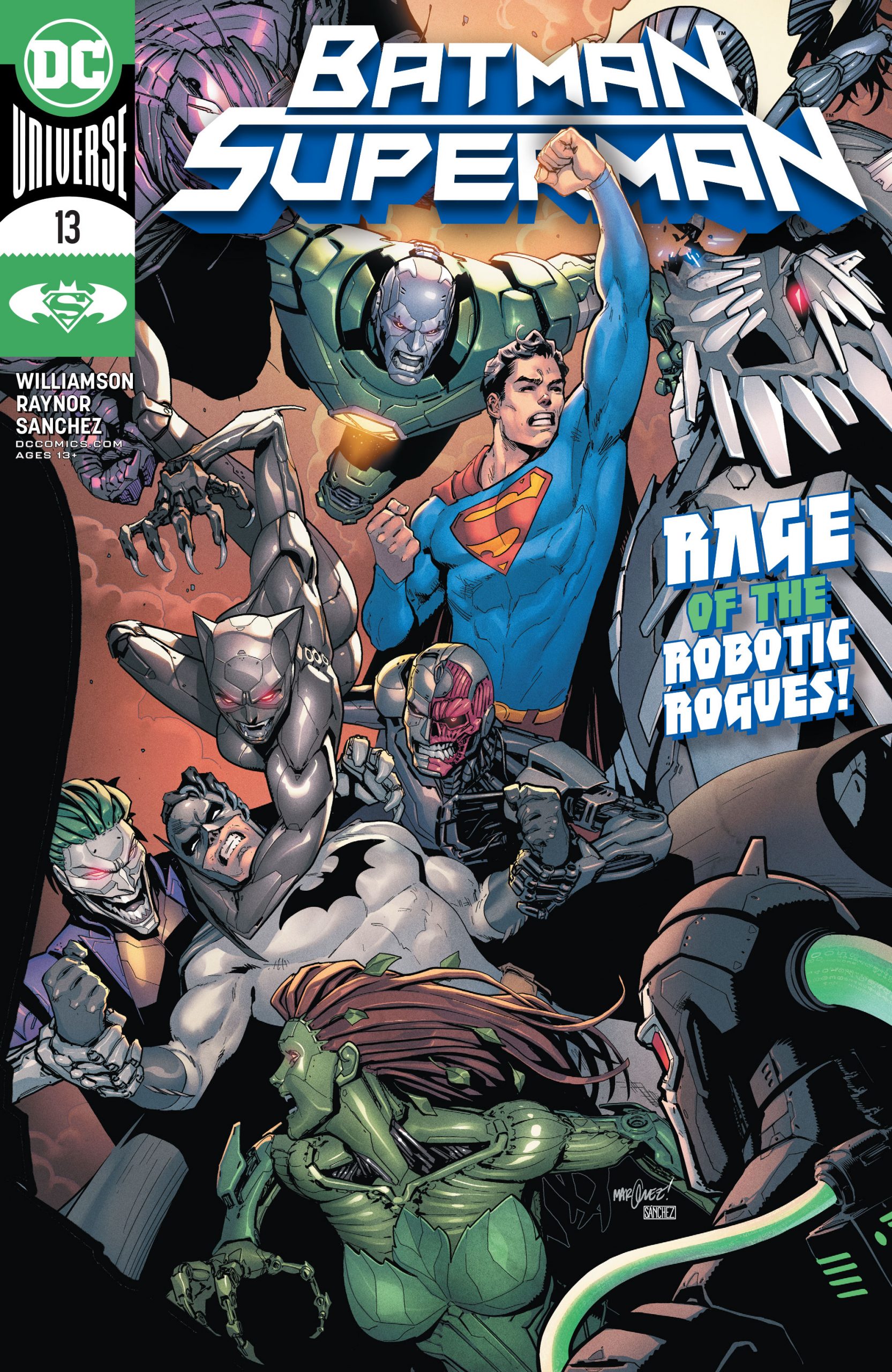 Gears turn and sprockets fly in this week’s Batman/Superman #13, as the World’s Finest team battles robotic copies of their deadliest enemies.

After being abducted from the Batcave in last month’s issue, Batman and Superman find themselves trapped on a moon base constructed by a rogue Brainiac offshoot program. This program accessed Bruce’s villain data files before the abduction. Upon their arrival at the moon base, Batman and Superman are confronted with various robotic copies of their rogues gallery, which were created by this Brainiac offshoot.

Meanwhile, Steel and Batwoman have gone in search of the our heroes. Prompted by a distress video Batman broadcasted to earth, the two heroes board a space ship heading for the moon. However, due to signal interference, Steel and Batwoman misinterpret Batman’s video, which explicitly warns the heroes of Earth to stay away from the moon.

Riddle Me This, Riddle Me Fraught, Who’s Afraid of a Riddler Robot?

Joshua Williamson’s script is a ton of fun, as he gets to showcase his writing chops. He uses all of the classic Batman and Superman villains: Two-Face, Joker, Darkseid, and Luthor, to name just a few. Once again, Williamson proves that he can handle a large cast fairly well, as most of these robo-villians each get their moment to shine. 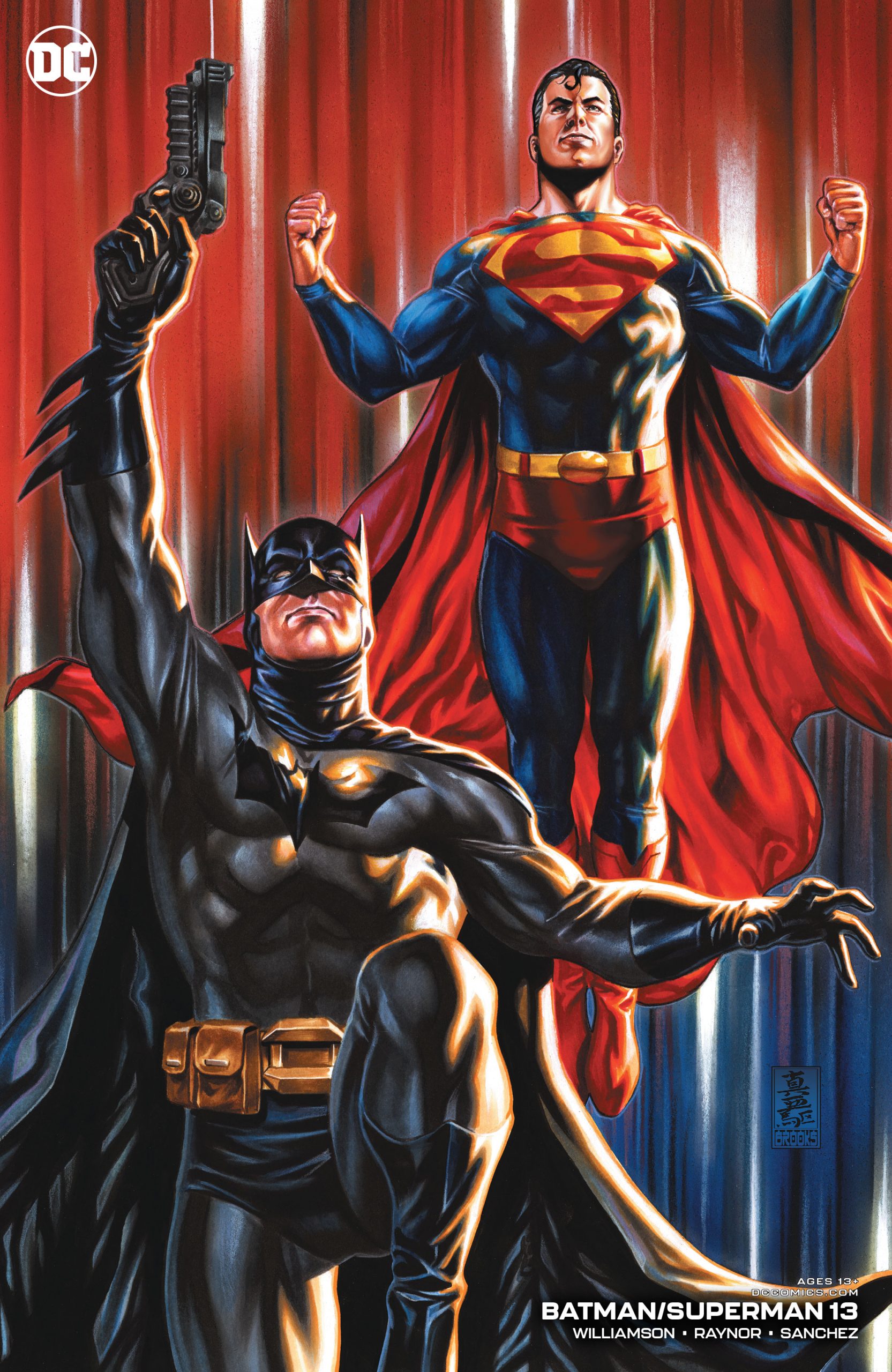 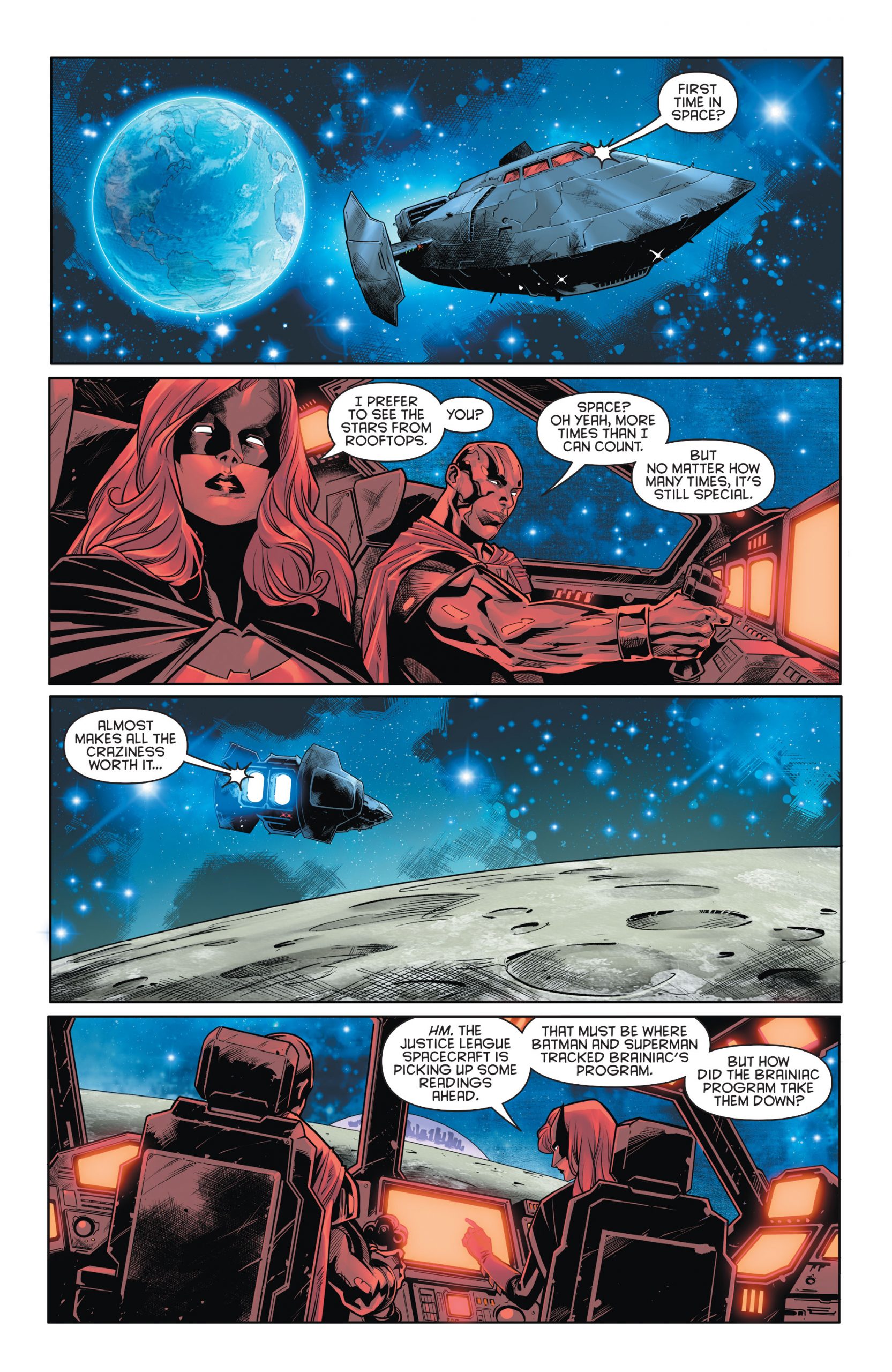 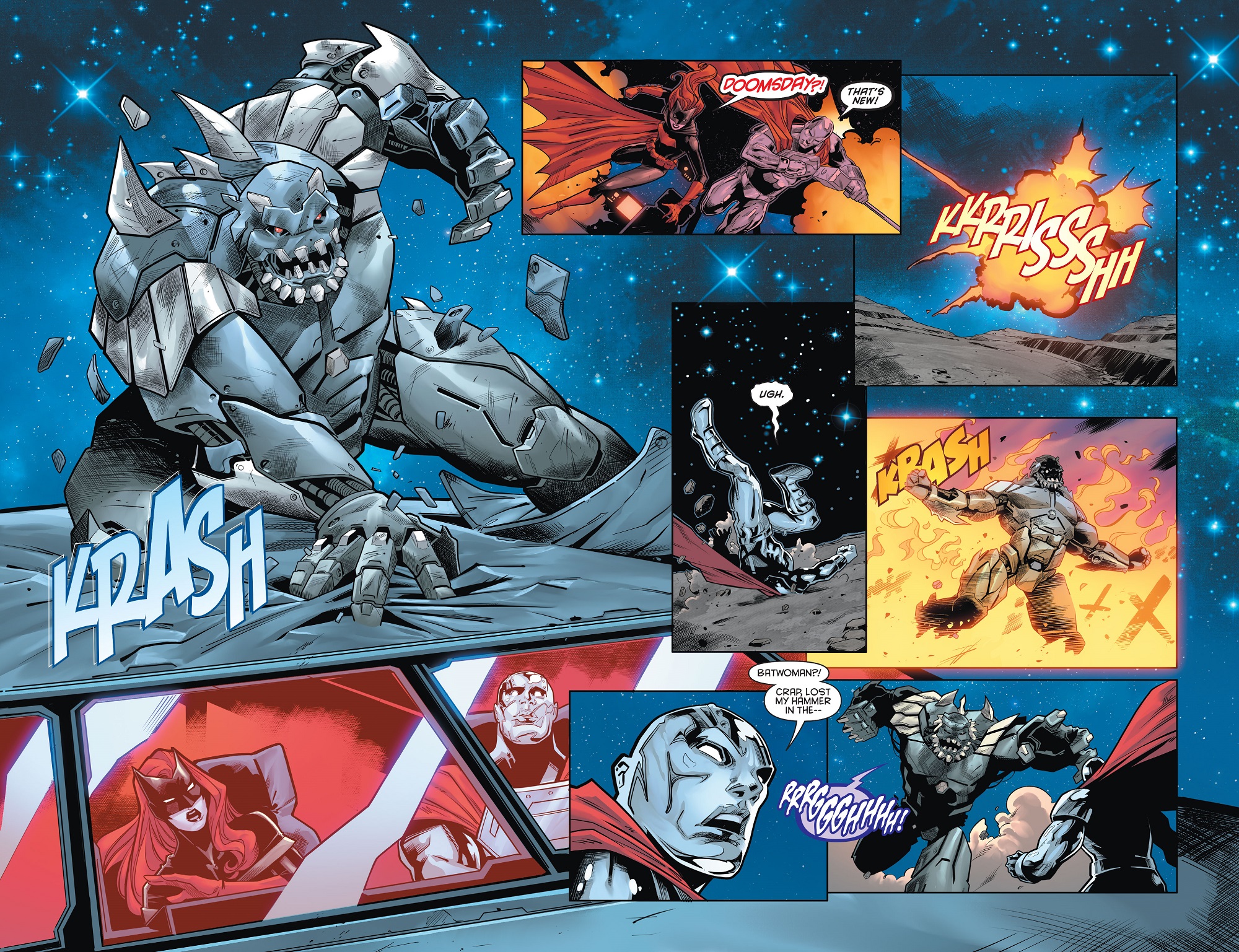 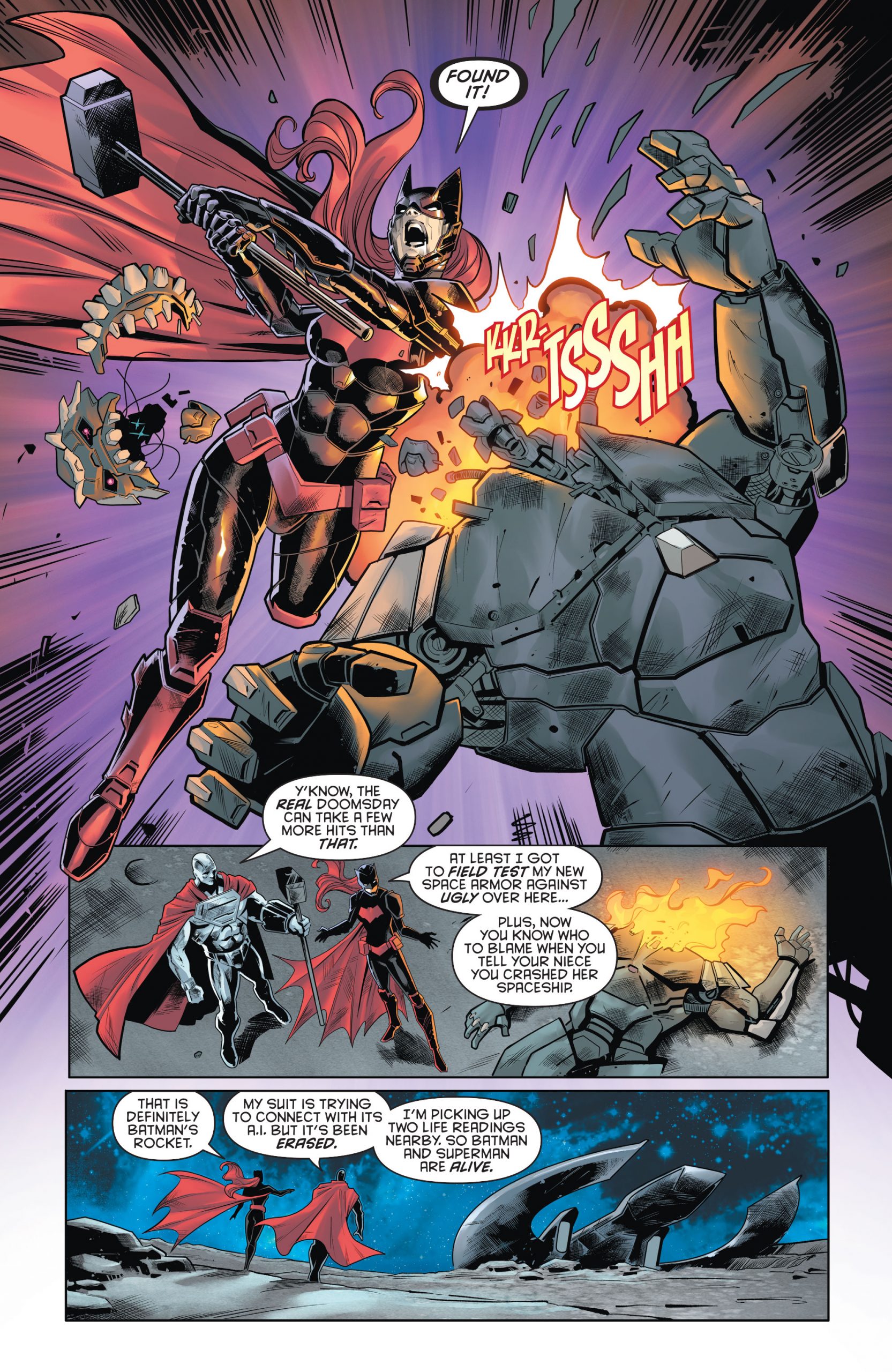 One of my favorite sequences in the book is when we find Batman blindfolded, chained, and hanging upside-down, while playing chess with a Robotic Riddler, who’s constantly hammering him with riddles. The comedy of the sequence is absolutely brilliant. It harkens back to Batman’s campy Silver Age incarnation, when villains would devise ridiculous traps. Despite the absurdity of Robo-Riddler’s scenario, the fact that Batman and Superman have been captured by an evil A.I. and forced to fight in a gladiatorial fashion brings a more serious tone to the story. This clash of tones is a hard feat to execute, nevertheless, Williamson manages to make it look easy.

Max Raynor once again delivers some stunning art. The aforementioned Riddler sequence is visually wonderful, as Raynor’s work captures the insanity of the situation. What makes it all even more amazing is Alejandro Sanchez’s coloring, as it captures and reinforces the bleak tone mentioned earlier. The juxtaposition of the line and color art mimics Williamson’s script, delivering a delightful moment where form and content collide.

Raynor also does a great job varying his panel shots. He manages to utilize everything from the nine-panel grid, the splash page, and modern-atypical paneling in an effective and compelling way. Therefore, the story is masterfully paced. Never once does a page feel boring or forced.

Batman/Superman continues to be an incredibly strong title. Williamson’s over-the-top storytelling works well for this team-up title, highlighting the more outlandish elements of each of these characters. Max Raynor’s work is eye-candy, and DC would be wise to offer him more work.

Final Verdict: No one should be afraid of this Riddler Robot.