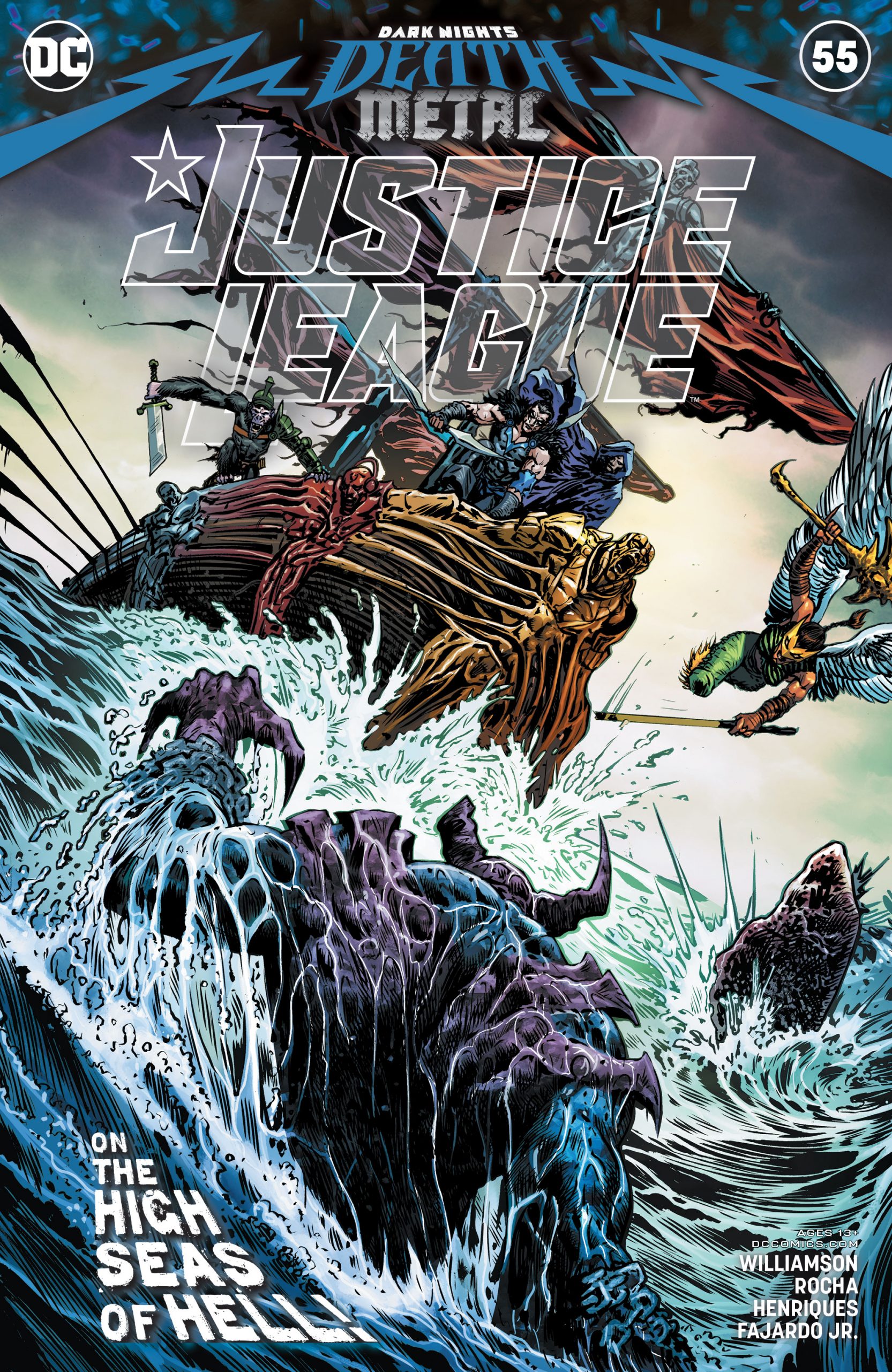 The League takes to the high seas, as Nightwing and his band of misfits set sail for Perpetua’s throne, in this week’s Justice League #55.

Picking up where the previous issue left off, Nightwing and company are mid skirmish with a giant Starro, while traversing the appropriately named Starro valley. However, things aren’t going so well for this b-list Justice League. Starro has each of the heroes hallucinating, and thereby thrashing each other.

On the whole, Williamson’s script is an improvement over the last one. It’s forward-looking, thereby lacking the clunky exposition that plagued Justice League #54. The pace has picked up in this issue, as the heroes quickly move from one place to another, creating a sense of urgency, and excitement.

Although Williamson kicks things into high gear in this issue, he manages to make time for some important character moments. Specifically, there’s a fantastic scene between Hawkgirl – the only true Justice League member on this team – and Lex – the main antagonist of the Snyder run. The two get into it over Lex’s treatment of the Martian Manhunter, and their disagreement quickly escalates into cathartic violence. 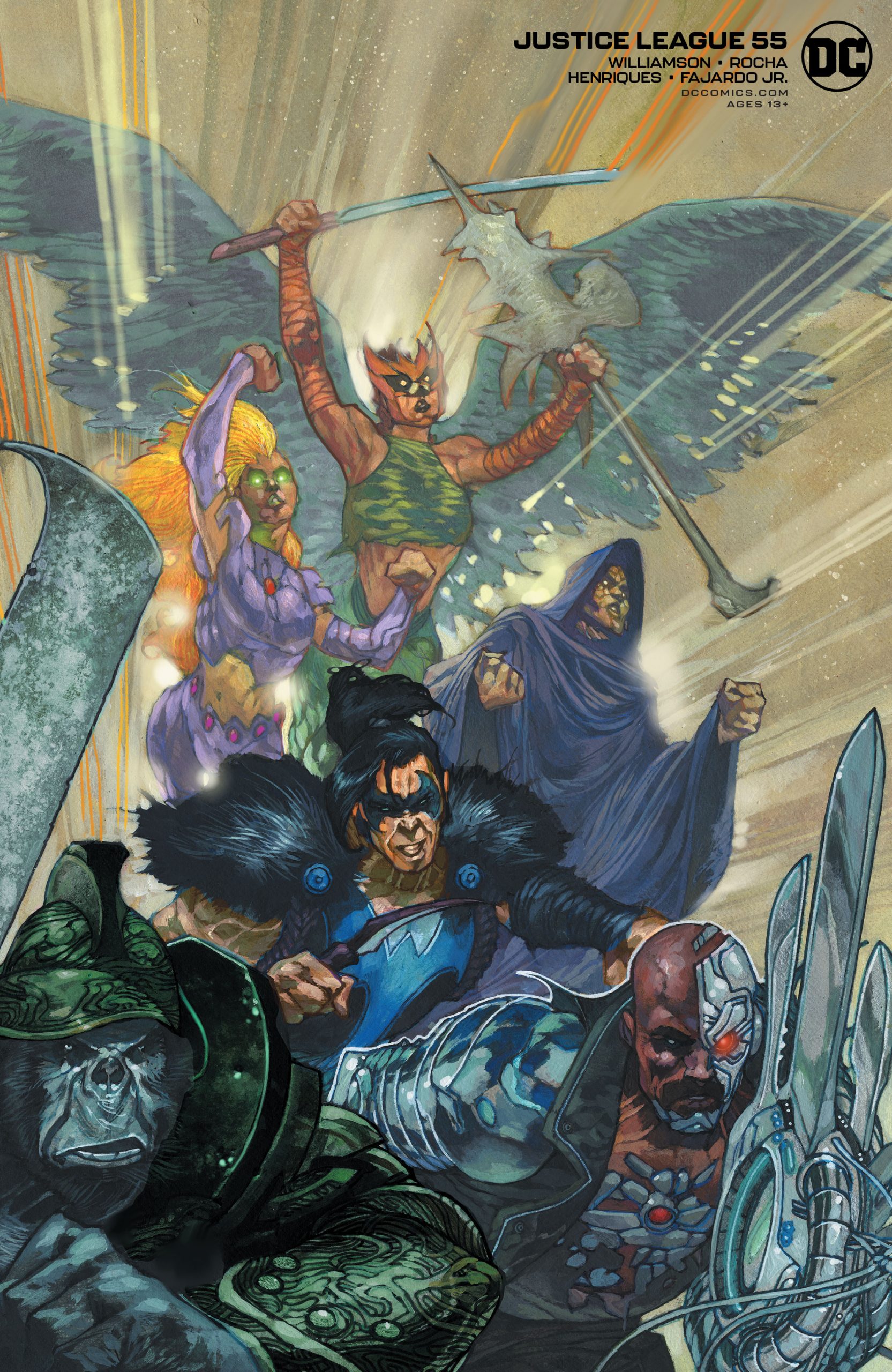 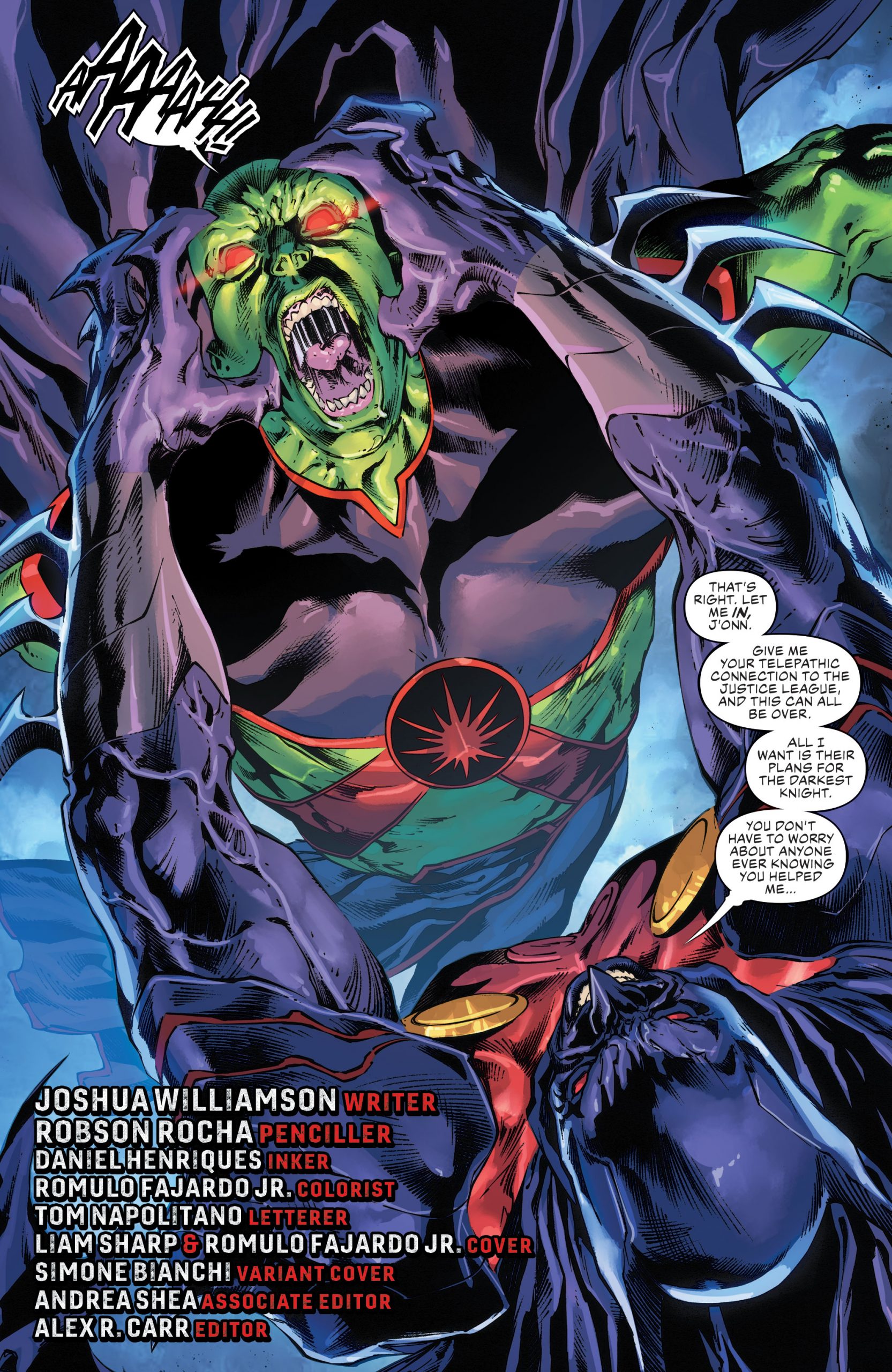 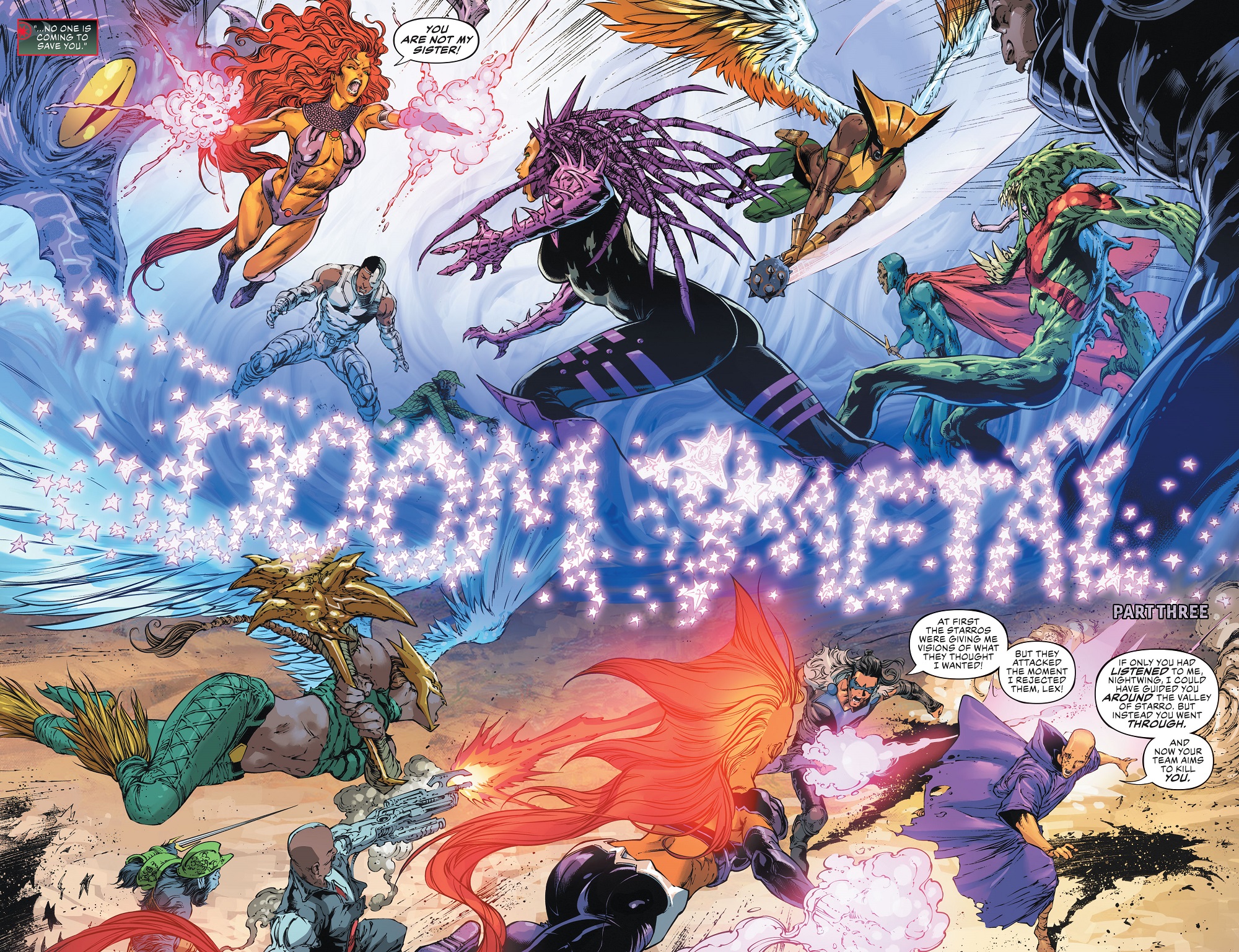 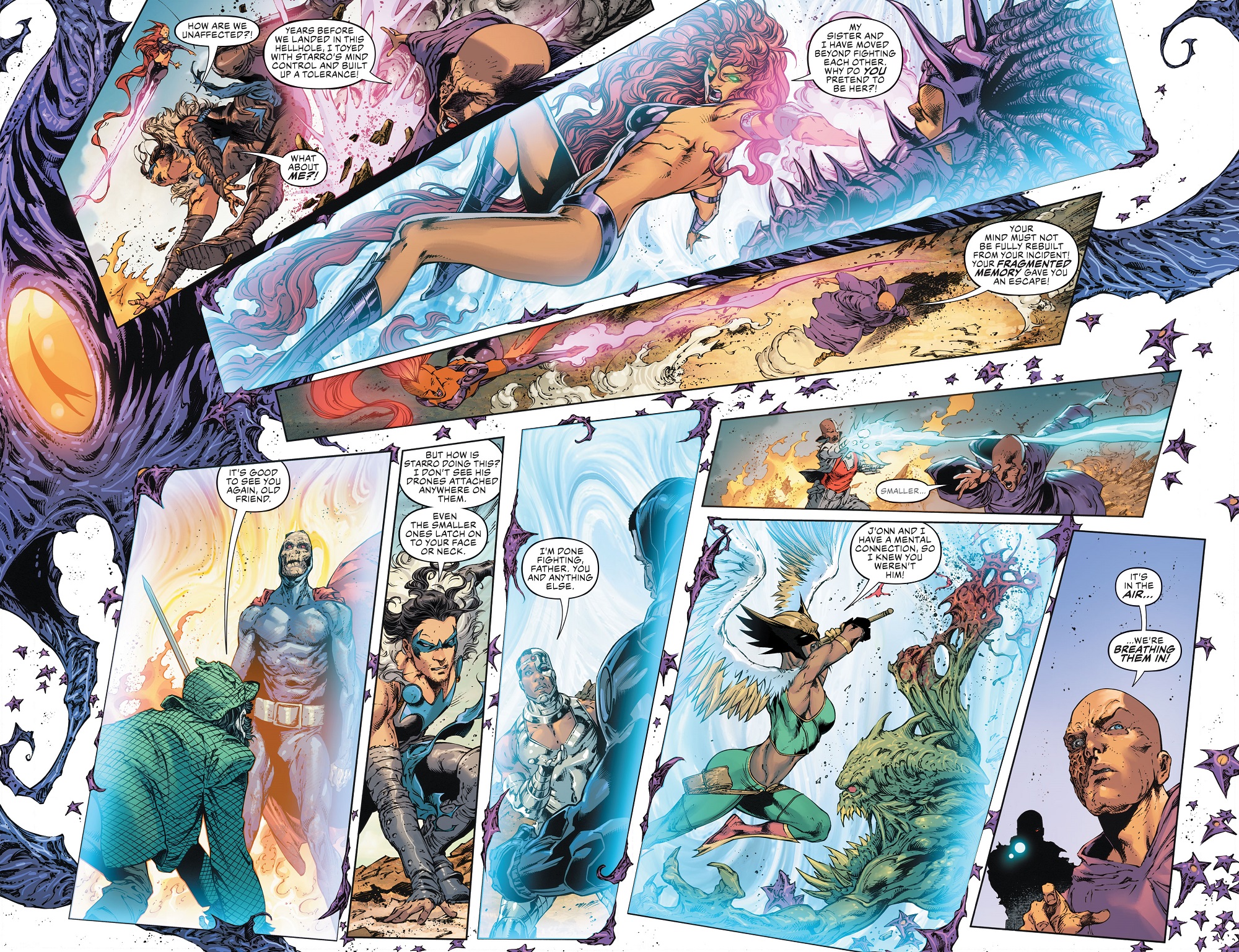 Yet, despite all of the strengths of this issue, Williamson still manages to commit a “writing sin”. When Luthor intervenes in the Starro fight, Nightwing asks Lex why aren’t they affected by Starro’s mind games. Lex’s response: “I have immunity, and you have a brain injury.” Now, I can buy that Lex managed to develop immunity, as Jarro did become a member of the League; however, I find it dubious that Nightwing would have limited immunity due to his “fragmented memory”. If anything, surely Nightwing would be more susceptible to mind control due to his busted noggin. In short, it was a convenient excuse to help push the plot forward.

While Xermanico penciled the first two issues of this crossover, for Justice League #55 he passes the baton to Robson Rocha and Daniel Henriques. Rocha is credited for the pencils, and Henriques is listed as the inker. Overall, this issue looks fantastic. DC did a great job choosing a penciler to follow Xermanico, as the two artists’ styles are very similar. It probably helped that Romulo Fajardo Jr. is credited for coloring both books, which I assume adds a certain amount of visual continuity between the issues.

I would argue that Rocha’s work is more expressive with regard to human emotions, while Xermanico’s strength is in his elaborate backgrounds. Both artists experiment with their panelling, as they both used Starro as the “gutter” or in-between space for their spread layouts. Frankly, I would be perfectly content with either artist finishing out this arc. Both are talented, and both are fun to look at.

Justice League #55 is a step in the right direction. While Williamson’s script isn’t perfect, he manages to improve his pacing from the last issue. Rocha is an overall boon for the book, as his work is dynamic and emotional.

Final Verdict: This issue may not be a grand slam, but it’s a helluva lot of fun.