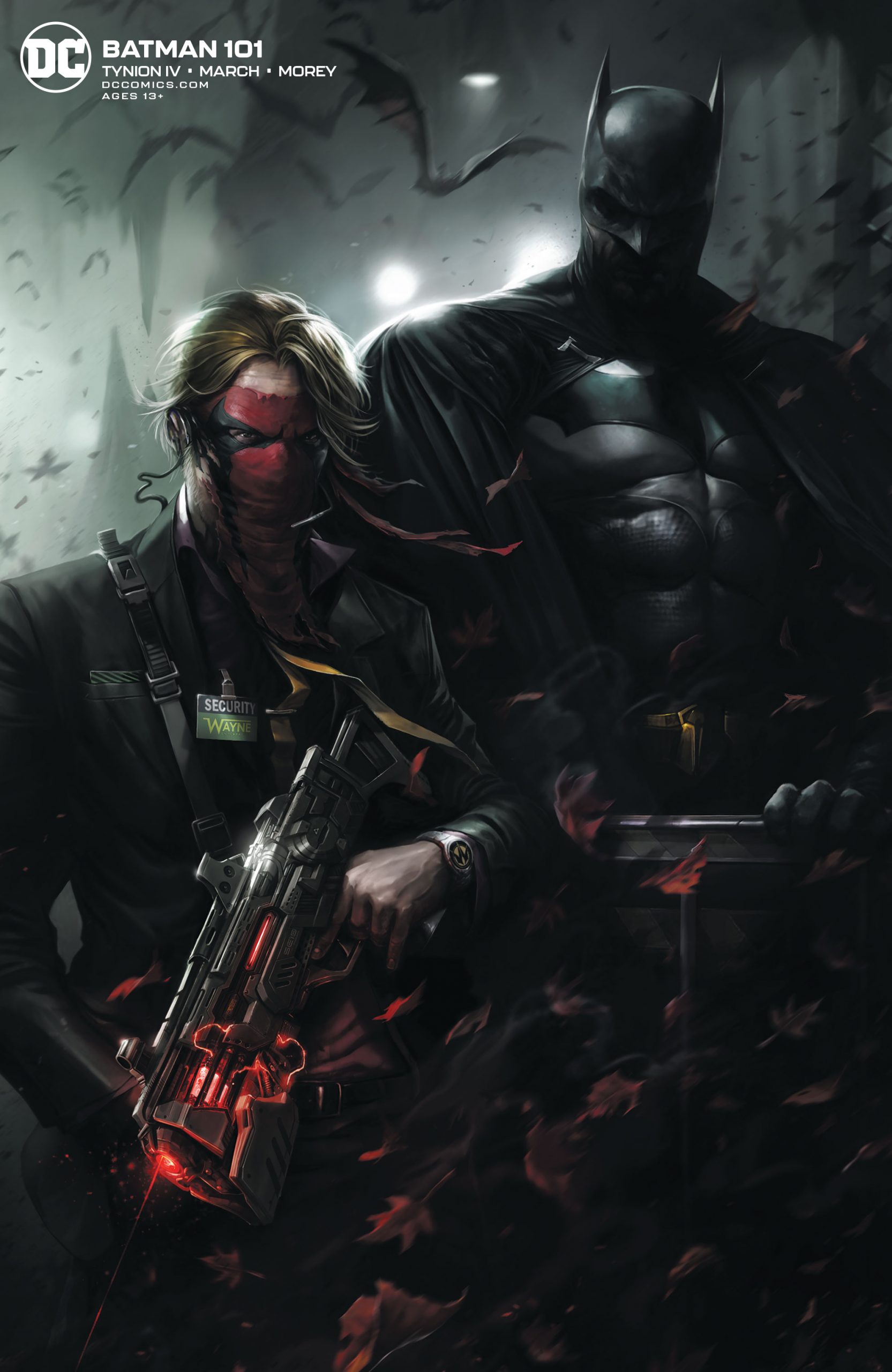 After the big event of “Joker War“, Batman #101 slows down to check in on what’s changed.

There are a number of repercussions that sufficiently shake up Batman’s status quo, the most interesting of which is his struggle of carrying on his battle without his unlimited resources, or the budget to fund his war on crime.

Somewhere over the years, Batman has become a smart, but lower-tech Iron Man, where he just has a gadget or suit of armor to fight against specific adversaries. Now that’s he’s been stripped of those resources, the idea of a “leaner” more back-to-basics Batman is a great one. Good on, Tynion for that idea.

There are other status quo shake-ups that vary in excitability; the dynamic between Batman and another character is one of them. A reader’s reaction to the shake-up may vary, depending on how big of a fan they were of Tom King’s run. To me, it felt like a convenient way to write another supporting cast member out of the books.

Other different status quo changes are listed out in perfunctory fashion. It’s as if Tynion had a checklist of topics he wanted to cover, and didn’t devote as much attention to creative ways of delivering the aftermath. Much of the issue’s dialogue actually does sound like a character asking what will happen now, and the other laying it out neatly. It’s kind of odd for an experienced writer like Tynion to lay out so much information in such a pedestrian manner. 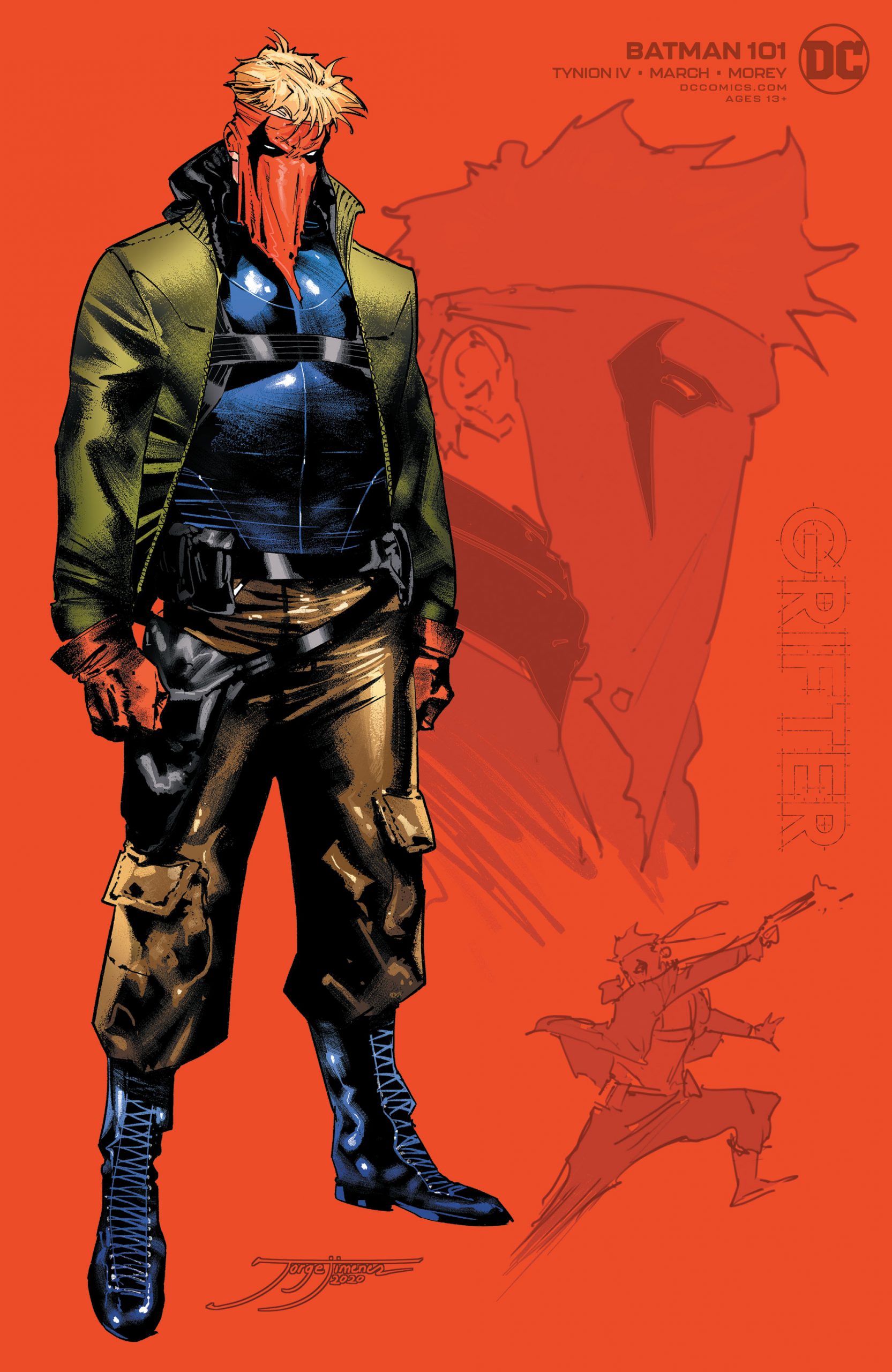 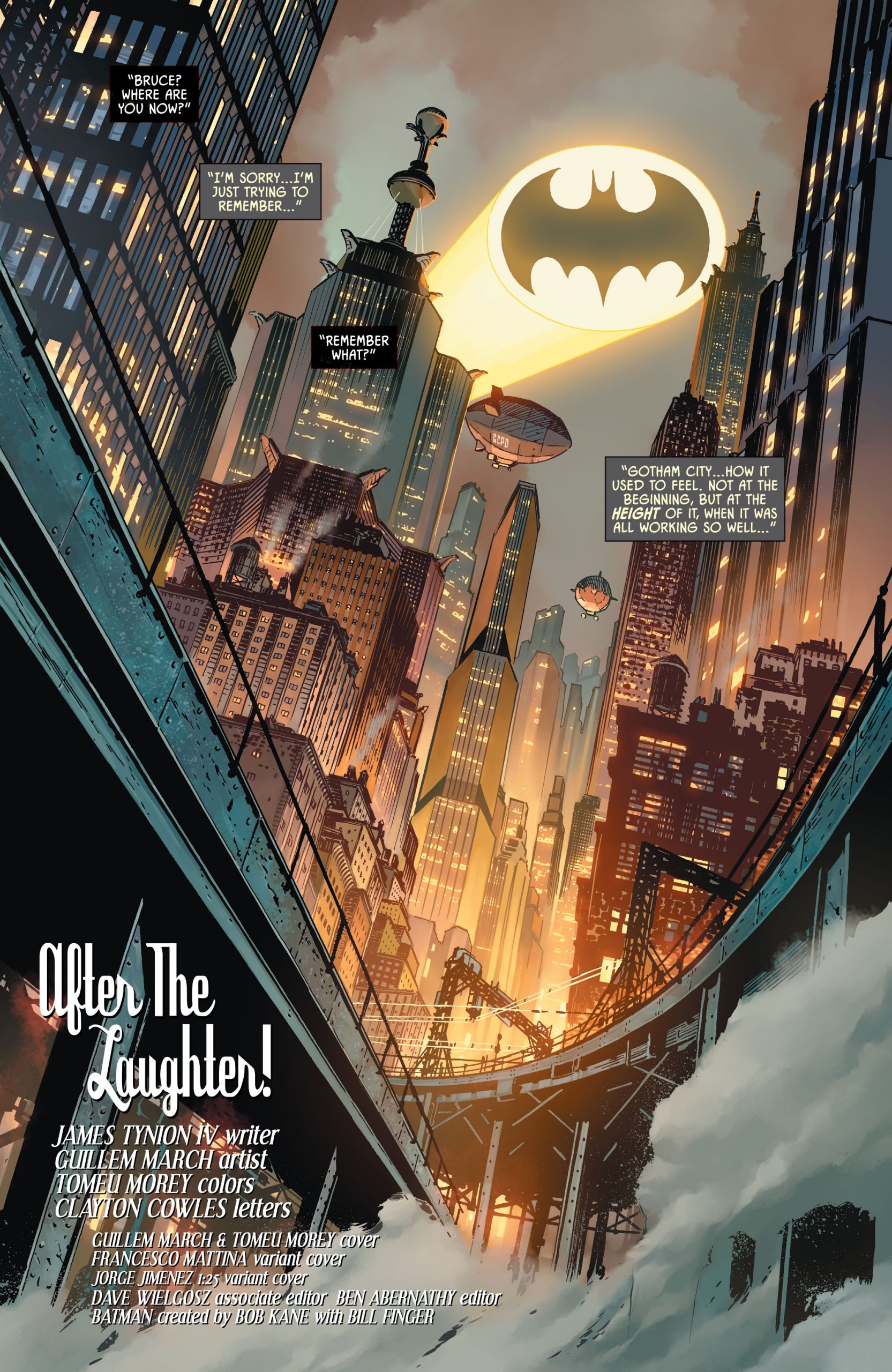 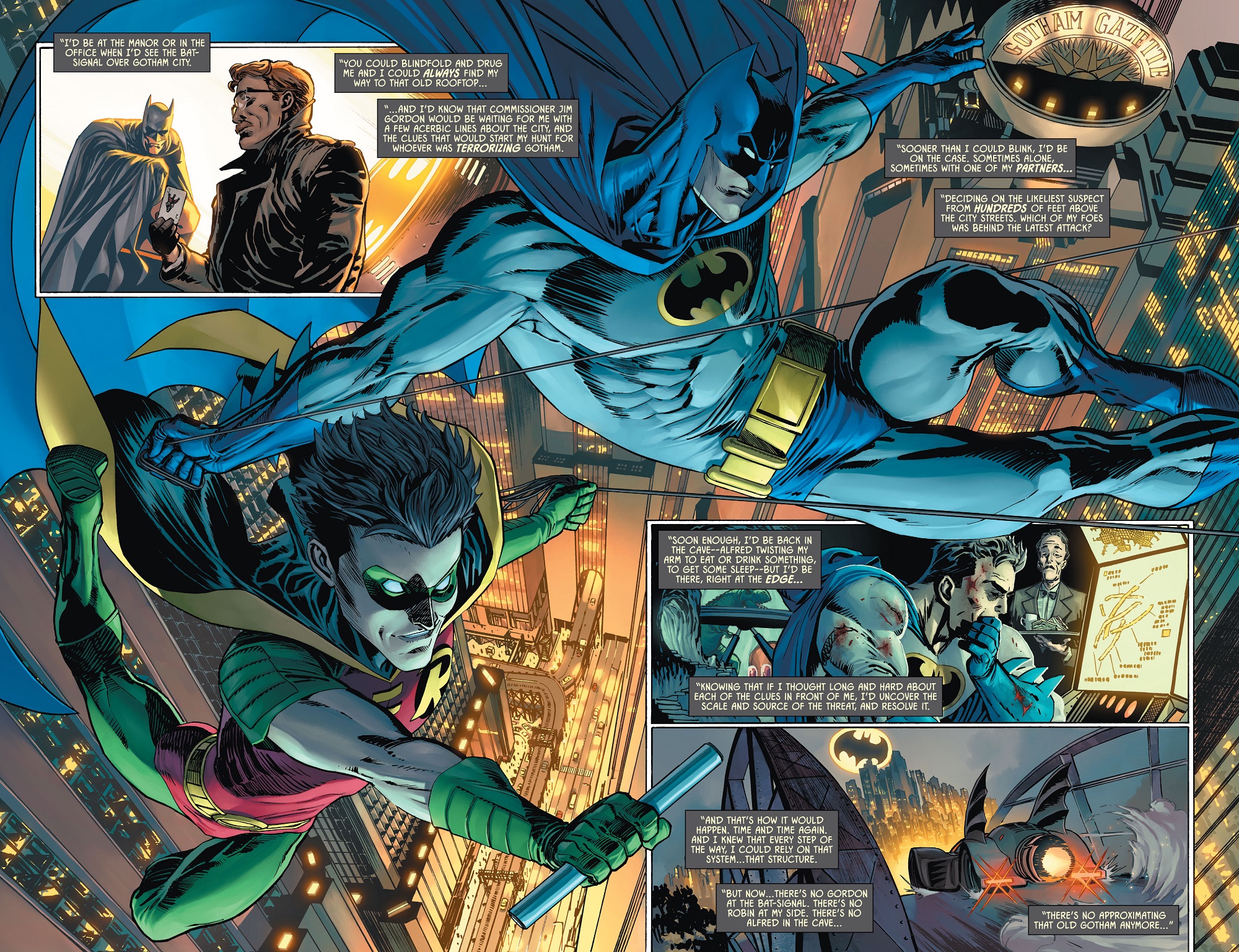 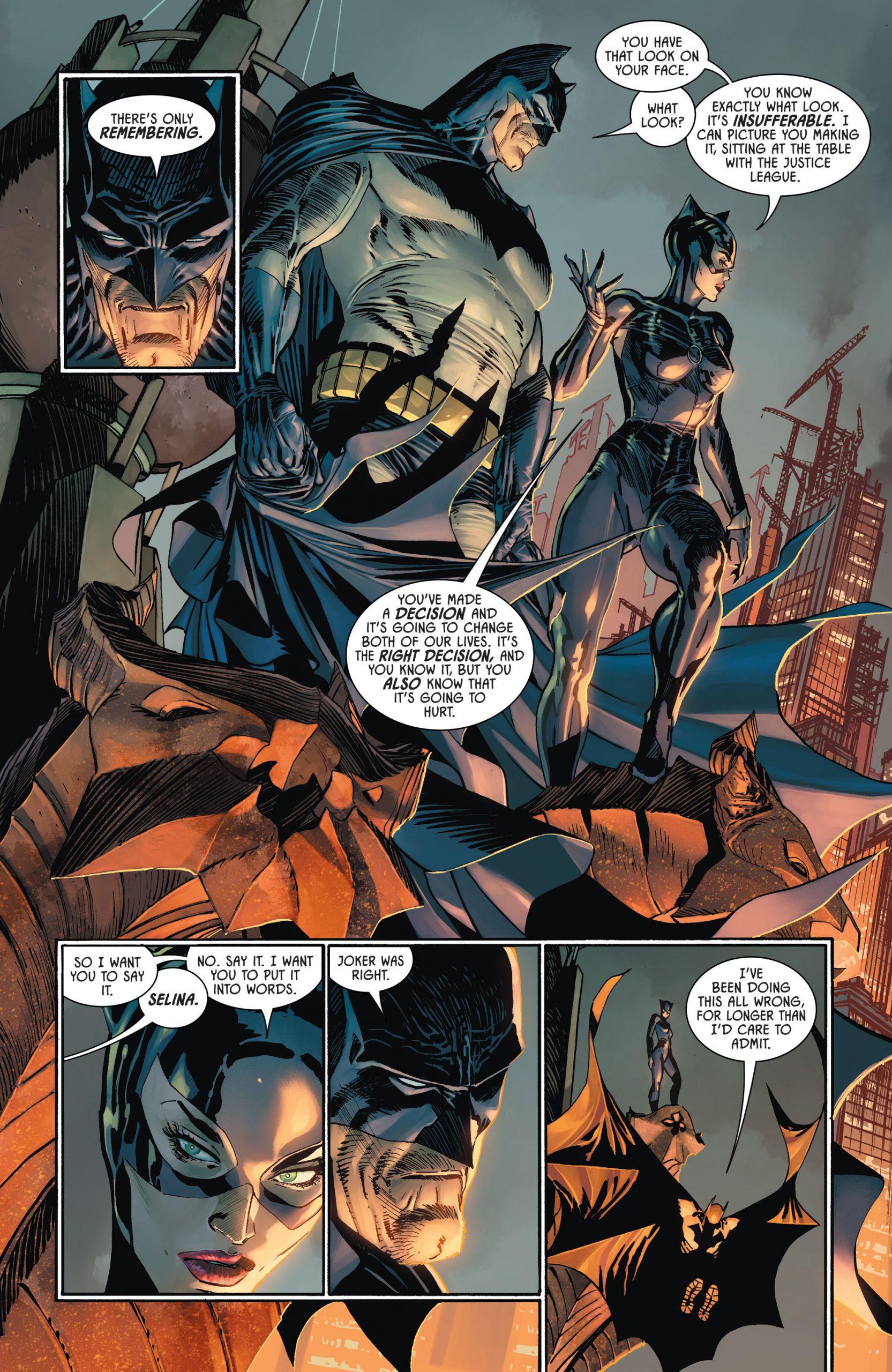 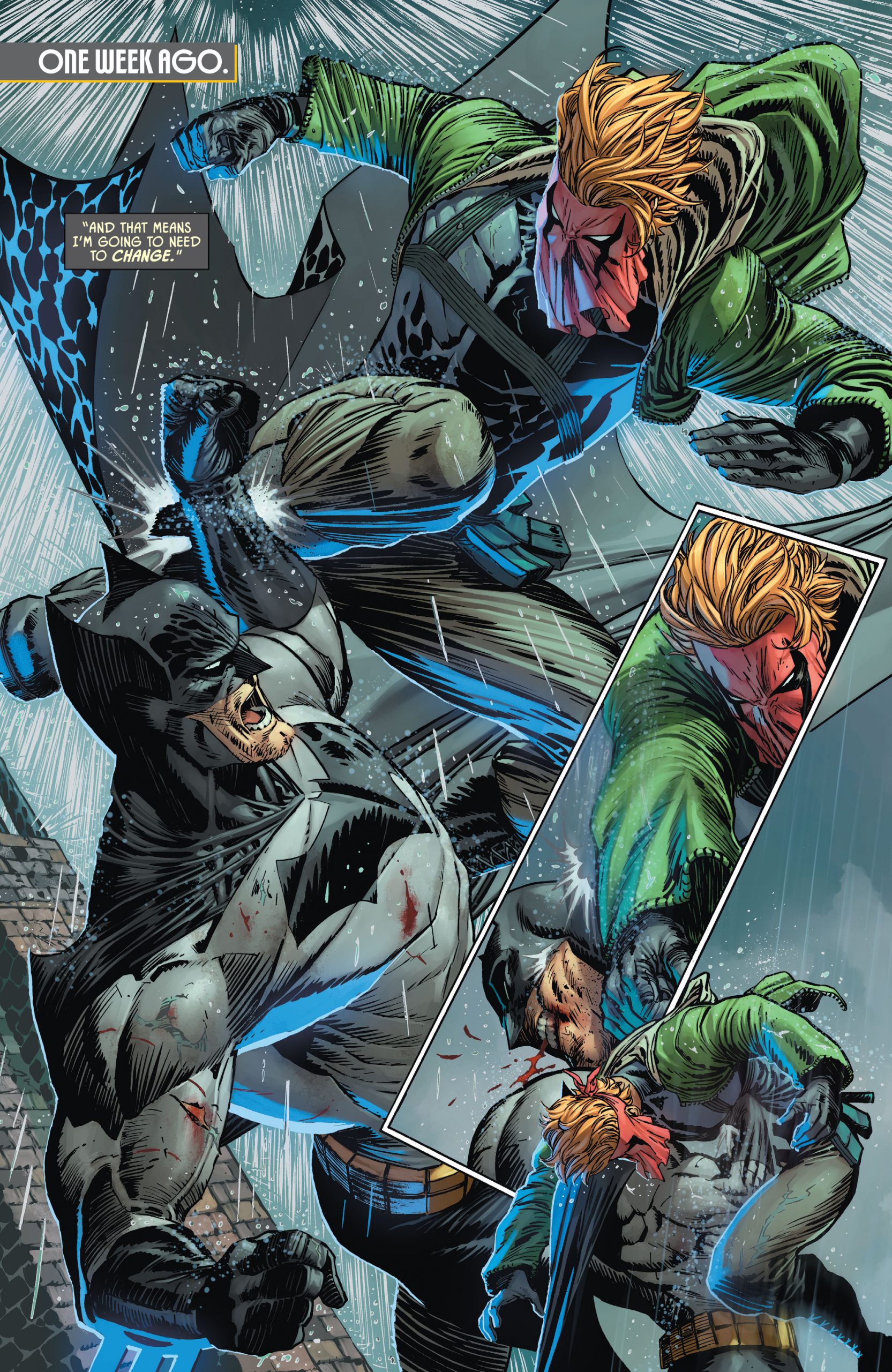 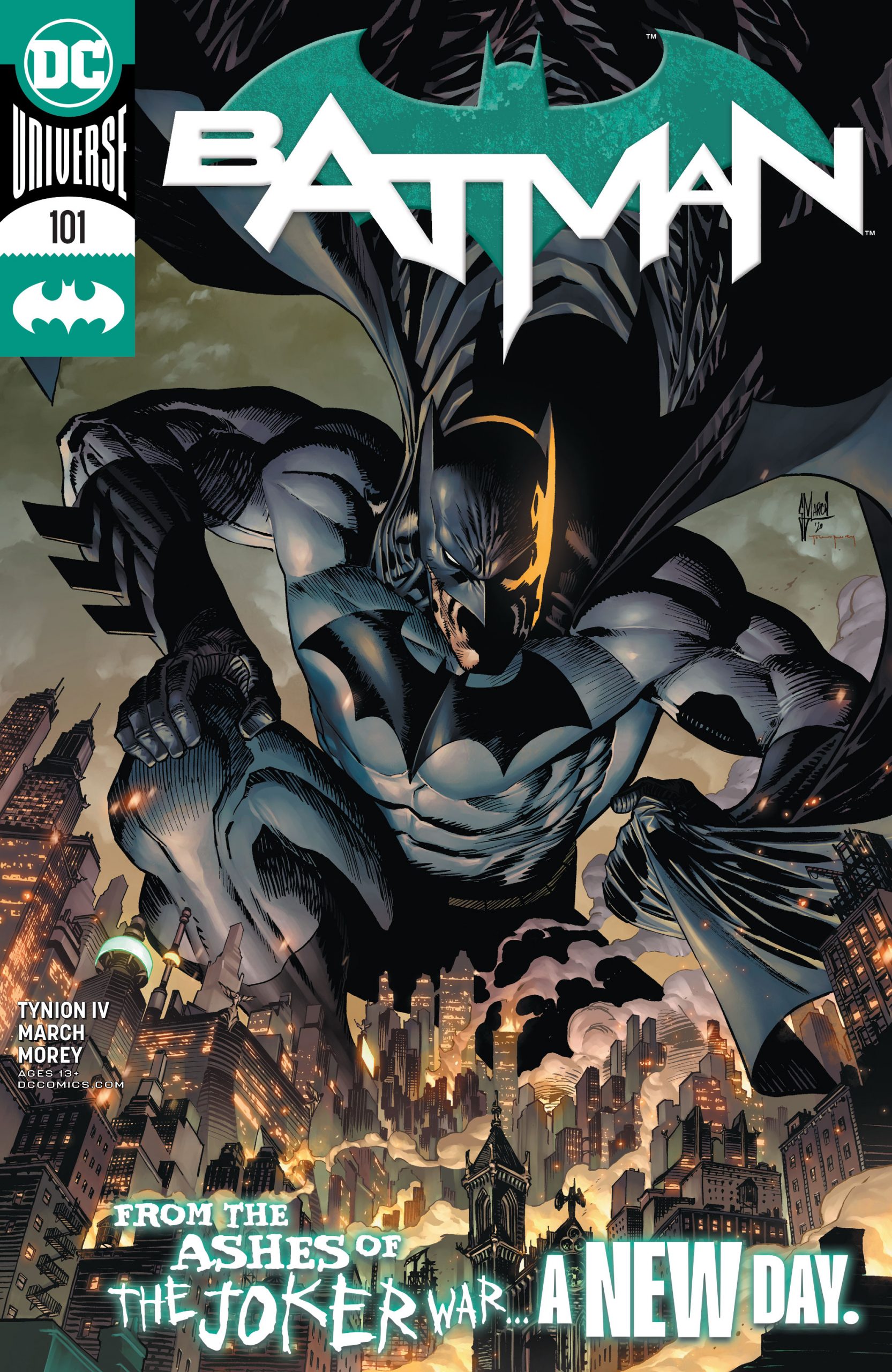 Guillem March is an Artistic Master

Actually, that’s not necessarily true. Typically, the back-and-forth dialogue would be boring. Fortunately, there’s something genuinely fun and exhilarating when things are rendered by artist Guillem March. The artist’s crazy dynamism makes everything exciting, even a basic conversation between two people.

Not to say that March doesn’t get to stretch his artistic muscles, and draw some really gripping action scenes. His opening double-splash page with classic-costume Batman and Robin, swinging through the city, is downright breathtaking. It’s completely gratuitous, but because it’s so beautiful, I don’t mind at all.

Similarly, there’s a fight scene between Batman and Wildstorm’s Grifter. It’s a thrilling action sequence with excellent choreography. Once again, it’s completely gratuitous, but once again I don’t care. It was straight-up fun to see the two characters go at it.

March doesn’t excel only in superhero scenes, his depiction of an injured Lucius Fox gives so much personality. I honestly forgot that Punchline poisoned Fox with Joker venom in “Joker War”.  Fortunately, Fox’s crippled body language, and the scars around his cheeks tell me everything I needed to know about what he went through over the past few weeks.

Batman #101 serves as a stepping stone to the new status quo, even though the shake-ups are a mixed bag.  Tynion delivers dialogue to readers in a monotonous fashion, almost skirting the edge of being tedious. Fortunately, it does not quite go there, thanks to the tireless efforts of March’s amazing artwork.

In my opinion, this issue is a good example of a fantastic artist elevating a mediocre script.