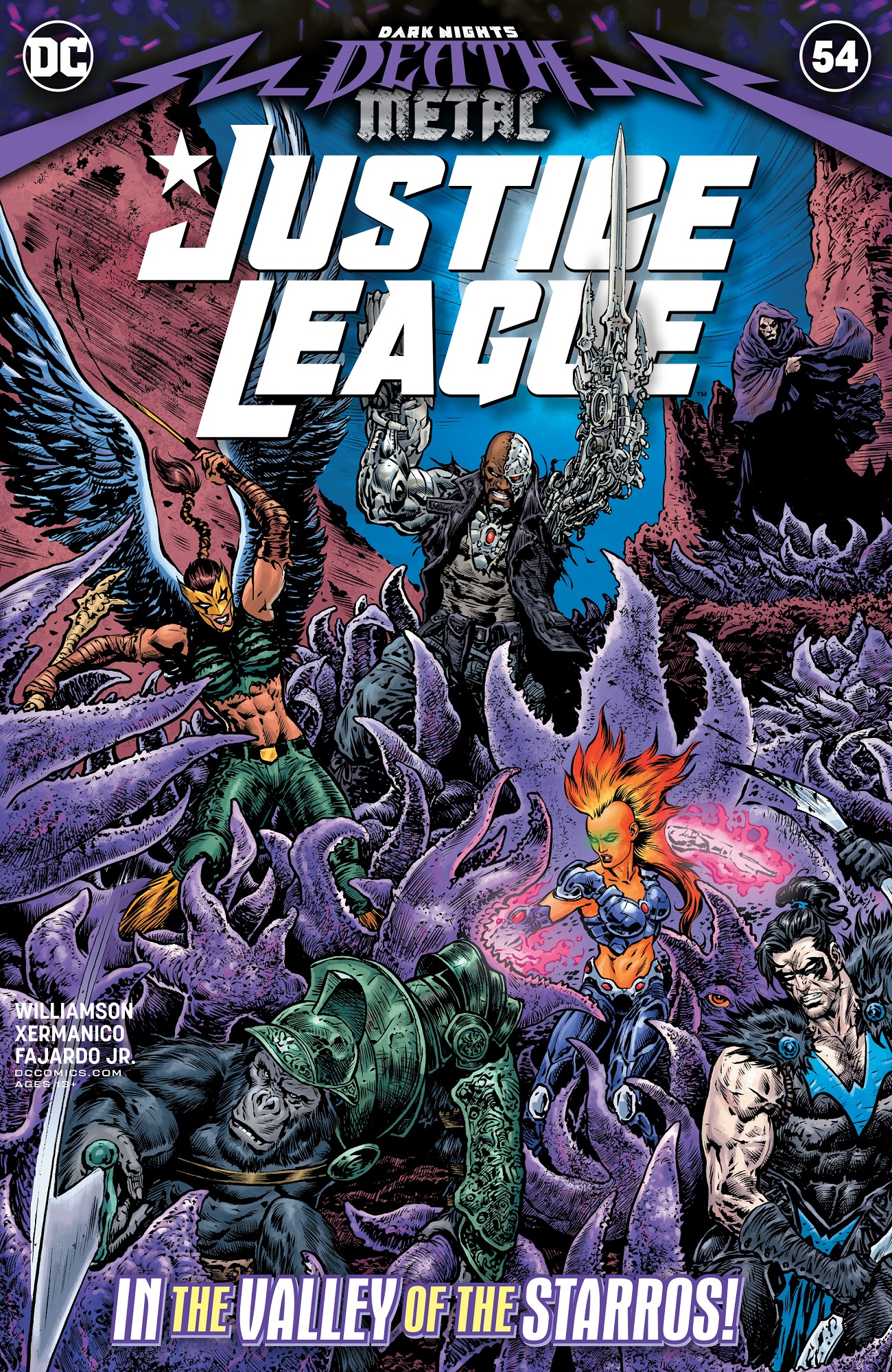 Former Titans reunite, as Nightwing and his rag-tag band of heroes traverse the valley of Starro, in this week’s Justice League #54.

The book opens with a boom – literally. A boom tube opens up, and out pop cyborg and Starfire, fresh from the Ghost Sector (see Justice League Odyssey #25). Unfortunately, when Cyborg calculated their arrival location, he wasn’t expecting that Earth had been transformed into a hellish nightmare. Therefore, the two heroes land in the middle of a skirmish between Nightwing’s team and mutant versions of Killer Croc, Professor Pyg, and King Shark.

Last issue, Lex Luthor offered to help the makeshift Justice League find Perpetua’s throne. As a major source for her power, this throne is fueled by the Legion of Doom, most of which were captured during the Justice/Doom War arc. Wary of Luthor, Nightwing decides that he and his team are safer traversing the Valley of Starro alone.

Since the DC Rebirth, I’ve become a major fan of Joshua Williamson’s. His Flash has been great, his Justice League vs. Suicide Squad crossover was a blast, and I cannot stress how much I’ve enjoyed his work on Batman/Superman. All of which brings me to this perplexing issue. Overall, the story isn’t bad, but rather clunky. 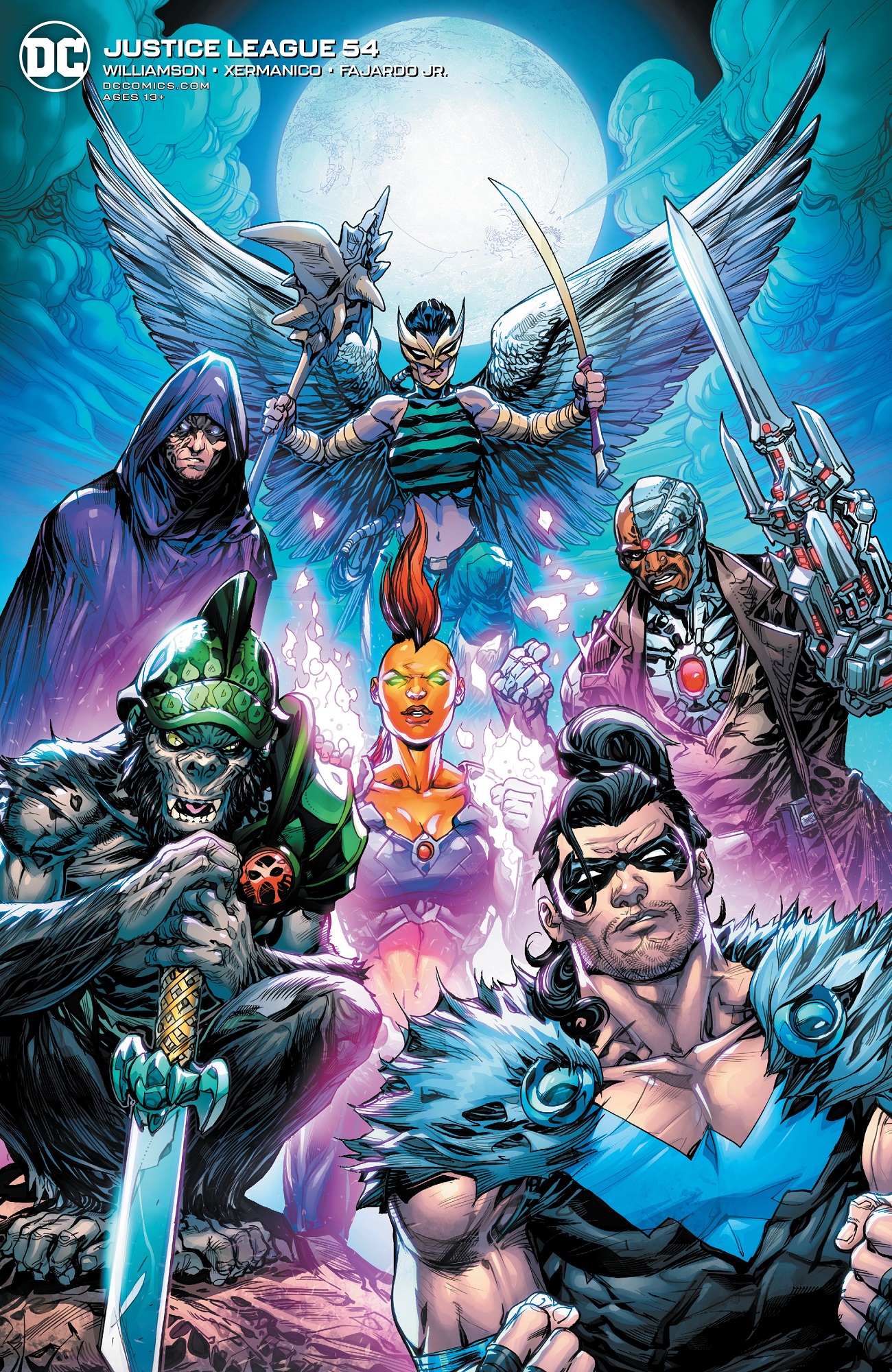 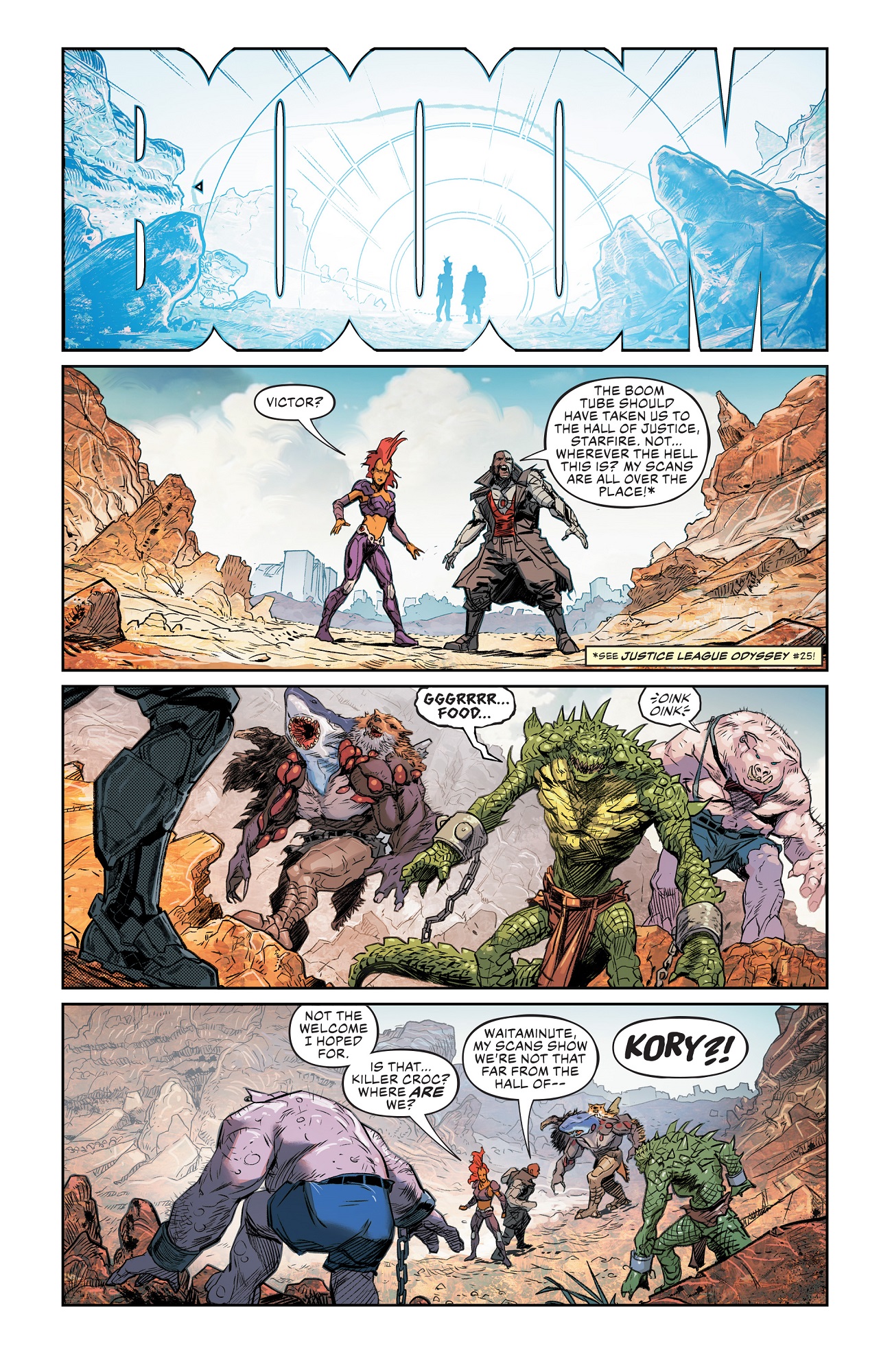 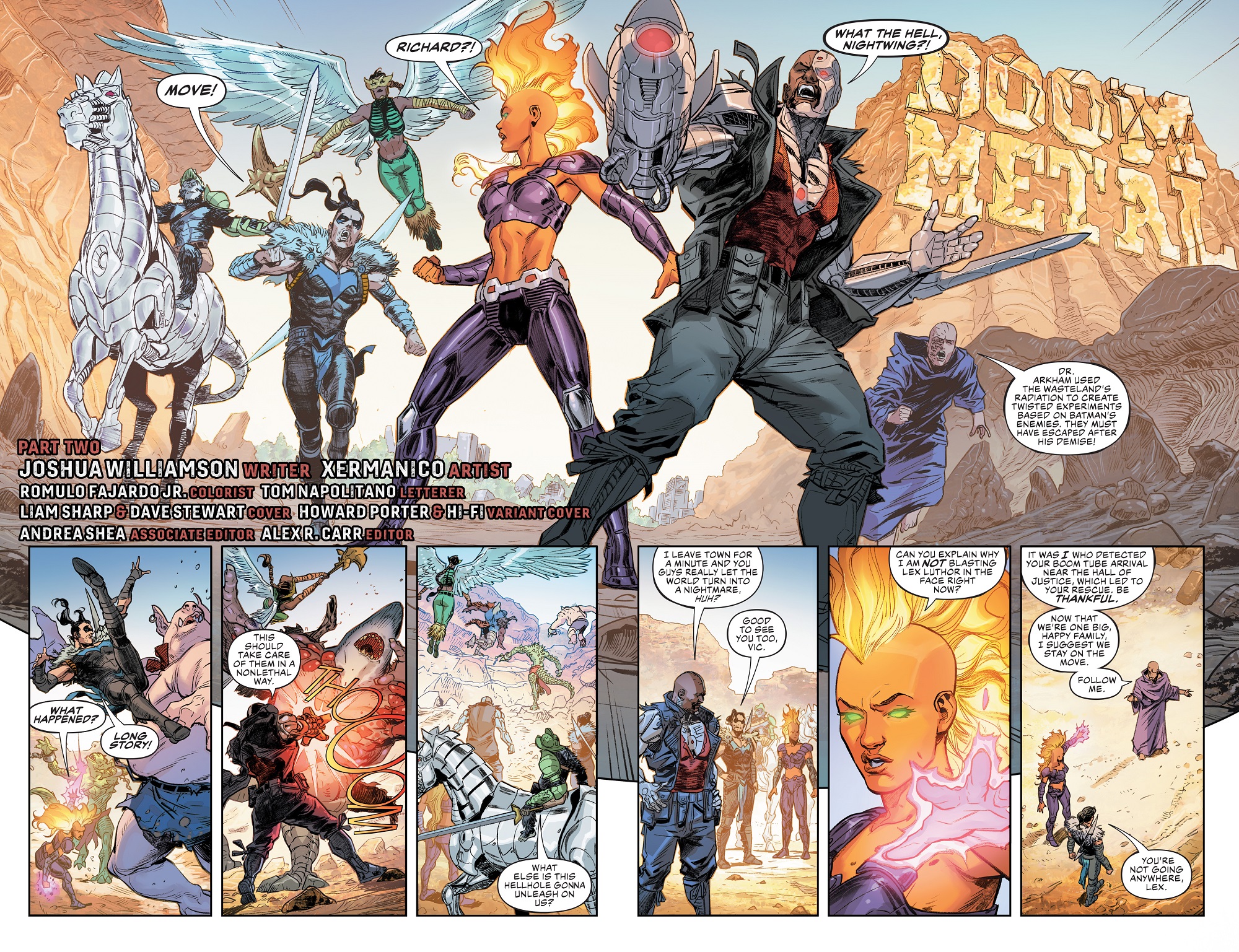 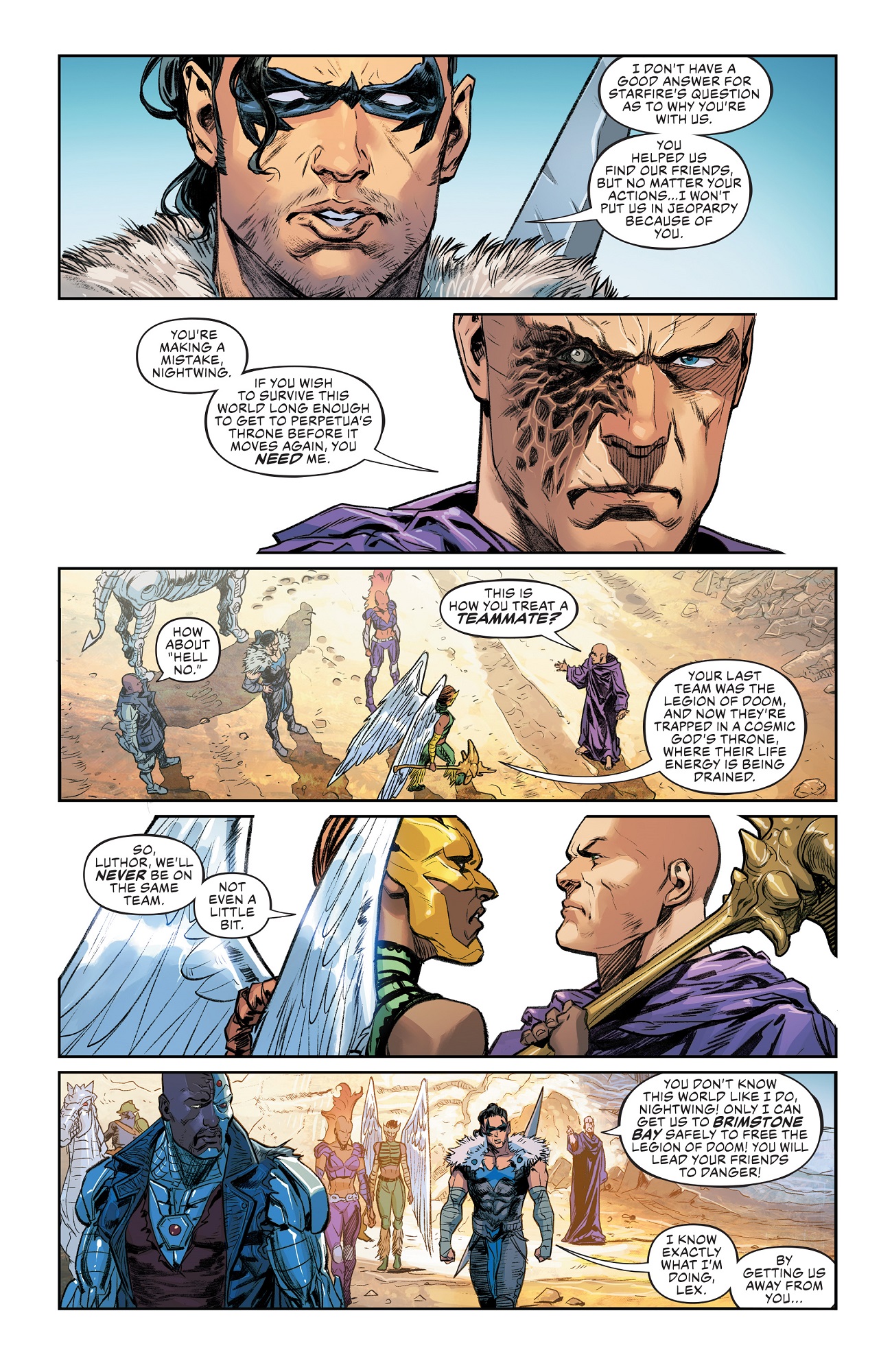 Williamson, who I would say is quite a competent writer, falls into the exposition trap. There are a few moments where he shoehorns in quite a bit of recap as Nightwing explains the mission to Starfire and Cyborg. It’s obvious that Williamson is using these two newcomers as surrogates for new readers. Nonetheless, it feels forced. While this isn’t the gravest of writing sins, such sloppiness is uncharacteristic of Williamson’s work. Frankly, this would be forgivable if this were the first issue of the arc, as this story does tie into Death Metal. However, the previous issue should have taken care of all of this exposition. Overall, it wasn’t the smoothest of transitions.

Despite Williamson’s somewhat awkward start, he and artist Xermanico hit their stride about midway through the issue, when the team enters the Valley of Starro. In case you’re unfamiliar with this location, don’t worry; its name says it all. It’s literally a valley infested with Starros (super-powerful, alien starfish with psychic powers). There’s an excellent quasi-flashback scene that showcases various important moments in Dick Grayson’s life, all of which are paneled around a Starro, creating a really neat effect.

Xermanico’s pencils are as impressive as ever. In keeping with his character redesigns last issue, the artist has now also reworked Cyborg and Starfire. Victor’s now wearing some kind of tunic, while Starfire’s sporting one gnarly mohawk. Admittedly, I haven’t read Justice League Odyssey, so I’m not sure if another artist designed these costumes. Nevertheless, Xermanico’s take on each of these characters is great. Visually, they easily fit into the post-apocalyptic aesthetic.

Justice League #54 isn’t as strong as its predecessor. I’m going to let it slide though, since the back end of the issue has a strong rebound. Despite his rough transition, Williamson’s brilliant imagination still permeates through the plot, while Xermanico does a great job putting meat on the script.

Final Verdict: this issue’s a fun read, despite its imperfections.

‘The Batman’ Release Date Pushed Back Even Further