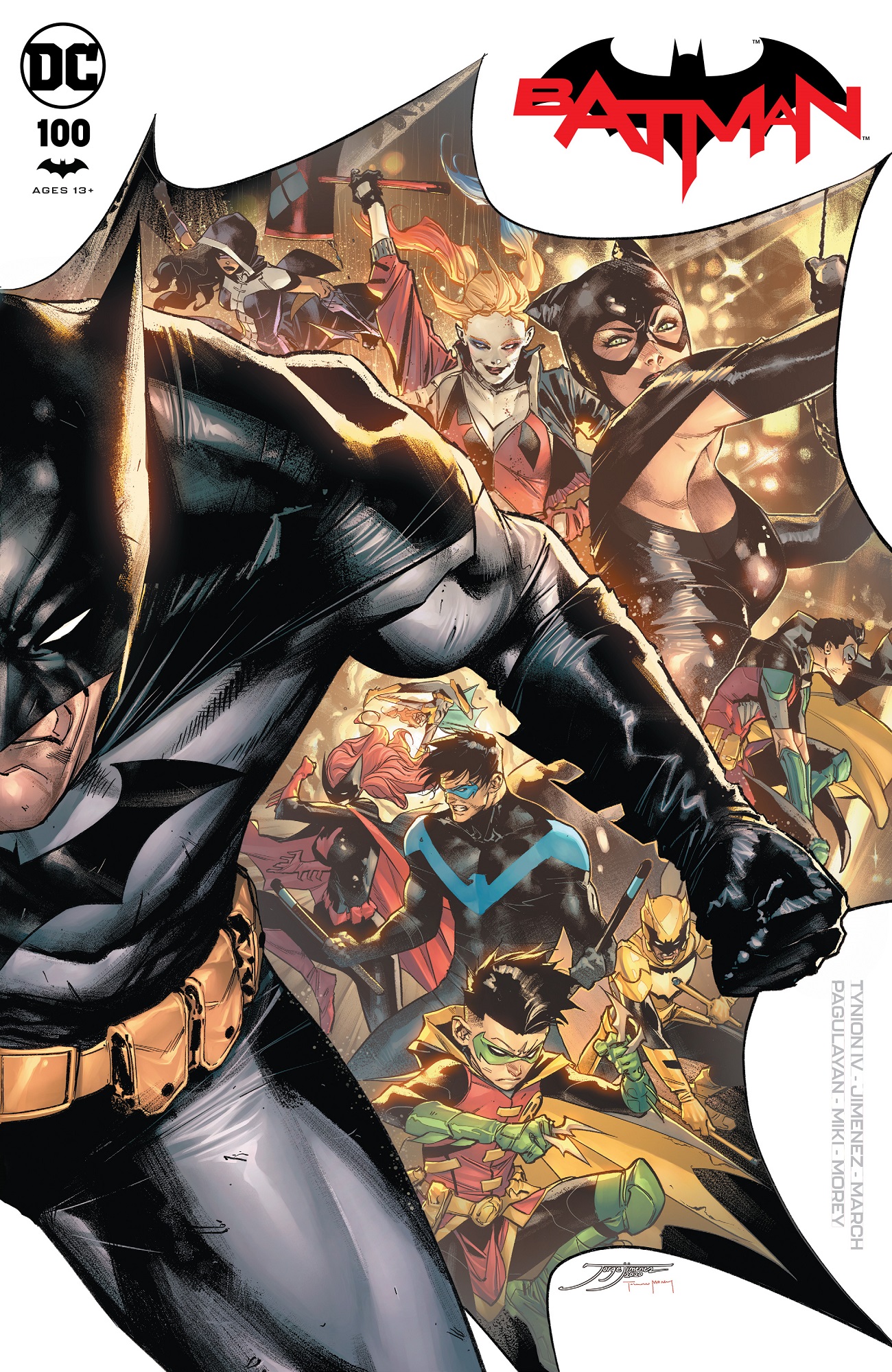 Batman #100 concludes “Joker War” in a fun, issue full of hit-or-miss character moments. The Batman centennial celebration nails a lot of right notes, but also contains a lot of duds, though it is great to see the Bat-family all together, and working like a cohesive unit.

Easily the best moments are when Nightwing’s easily taking down the Joker’s henchmen. After well over a year of having amnesia, after being shot in the head and then getting mind-controlled, this issue feels like such an amazing homecoming. Watching Nightwing rip through the villainous army with a cocky grin makes for a very cathartic experience for readers. It also ties up the plot lines in Nightwing’s book nicely.

The scene where the Joker reveals his ultimate goal is also a real cool idea. Without getting into specifics, it touches on some very real world fears about our societal structures. That pay-off was satisfying because it now places Batman in a difficult predicament that he cannot just punch his way out of.

Unfortunately, a lot of this comic suffers from a rushed ending that offers little to no build-up. In this issue, a lot of characters start doing things just because we’re nearing the conclusion.

The Barbara Gordon-Oracle scene is one example of something happening just for a cool moment. However, there’s little building up to her decision to become Oracle again, unless you’ve been reading her comic, which we still haven’t seen the final chapter of. This feels like bad timing, or wasted storytelling potential. 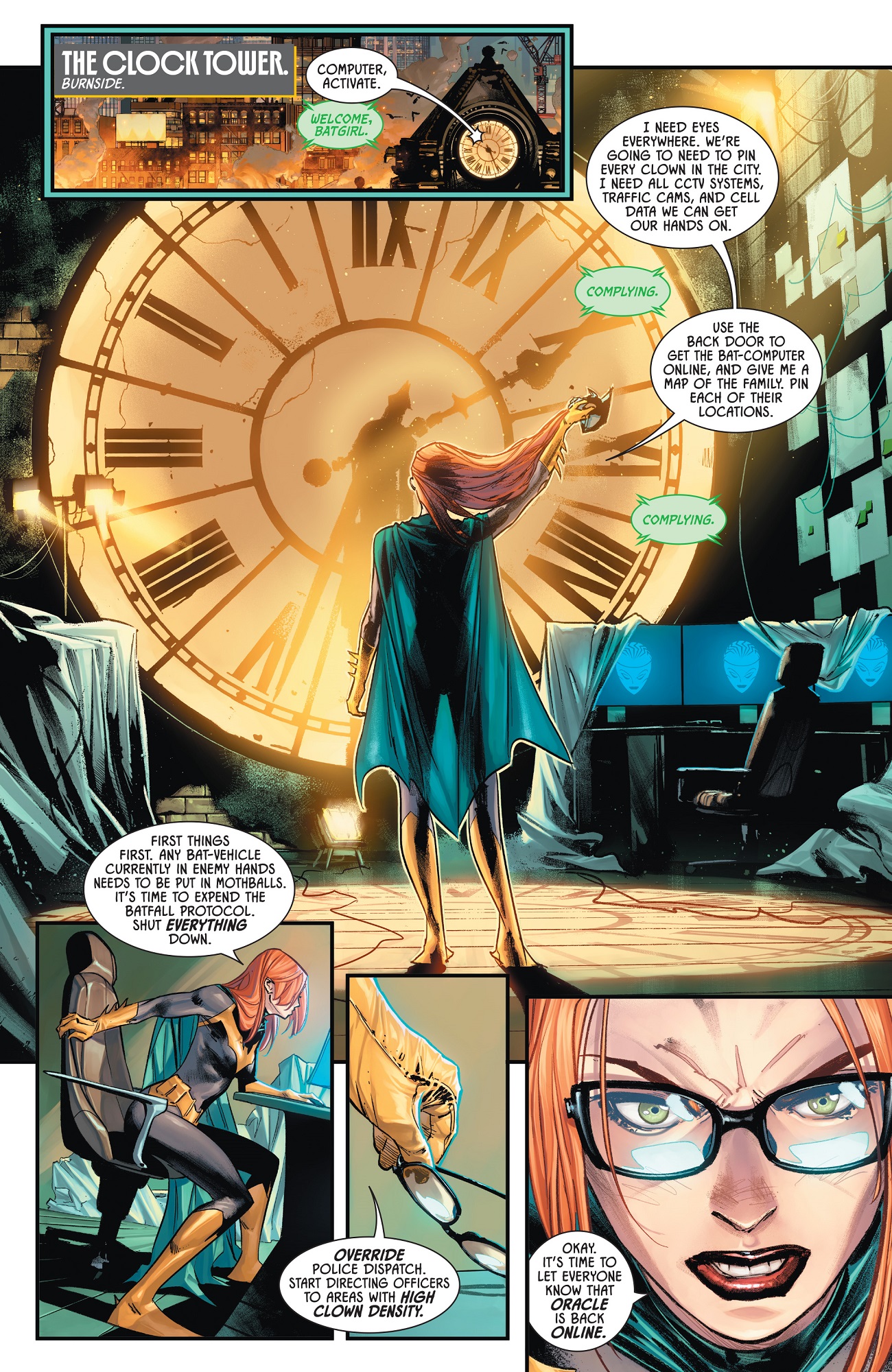 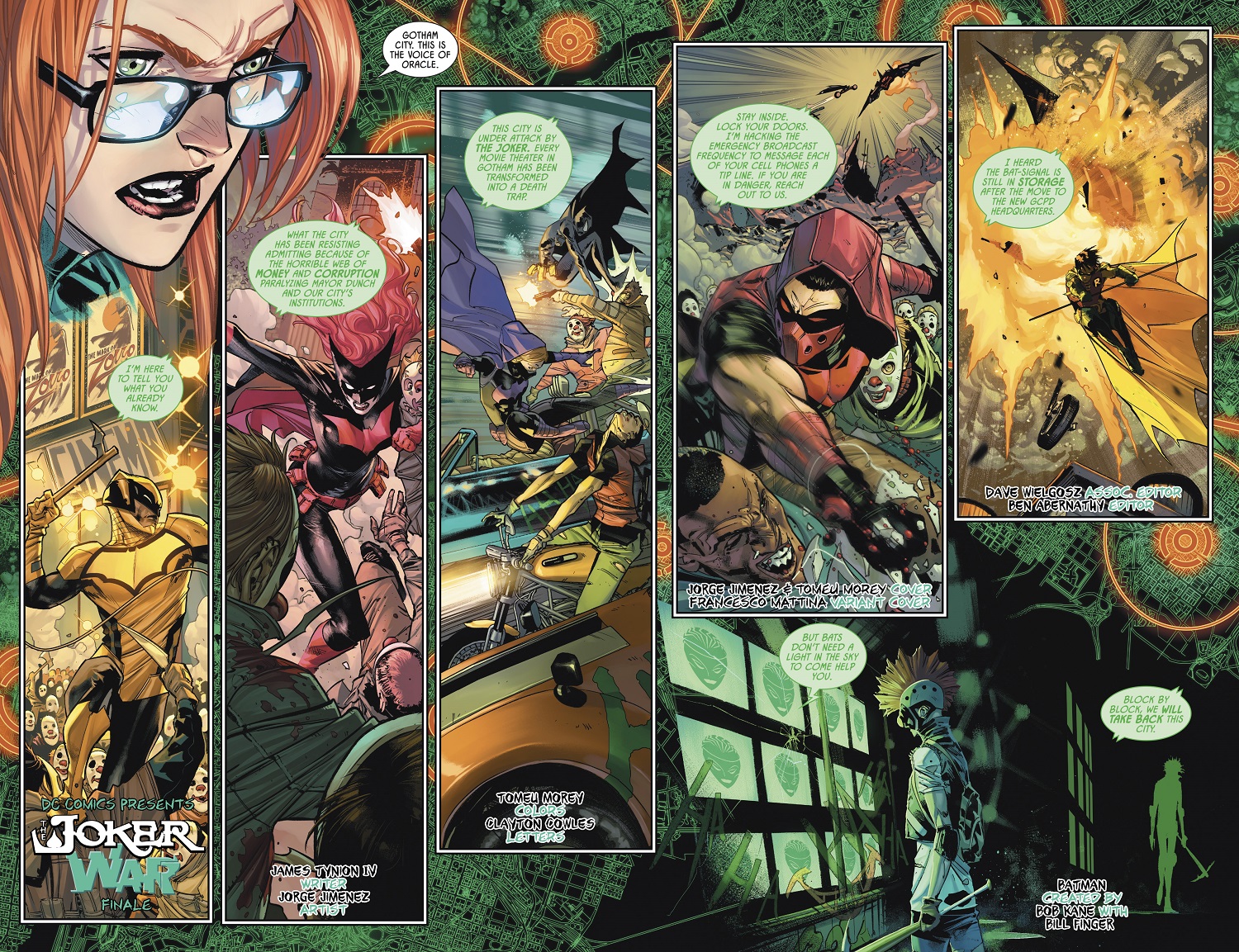 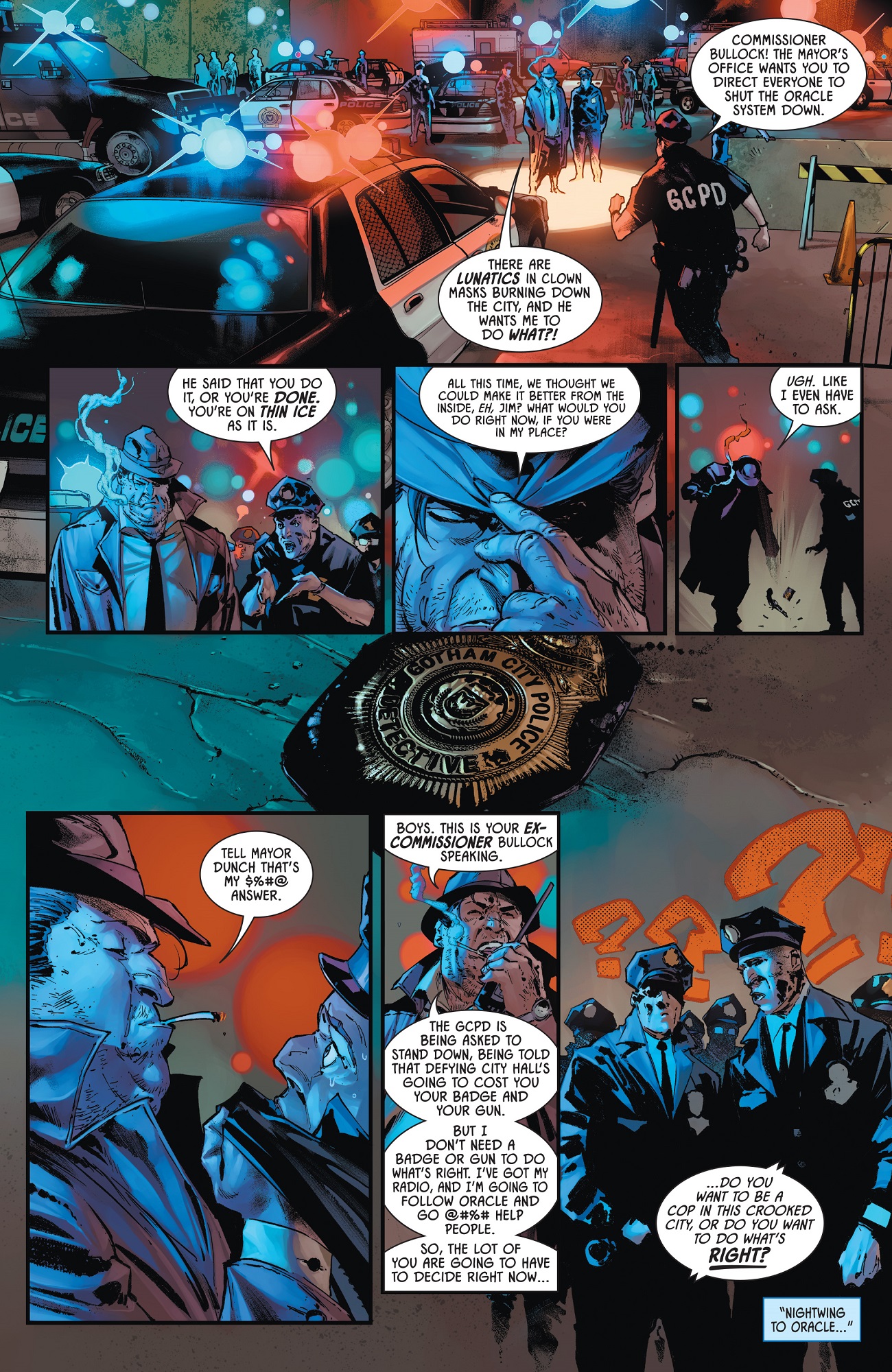 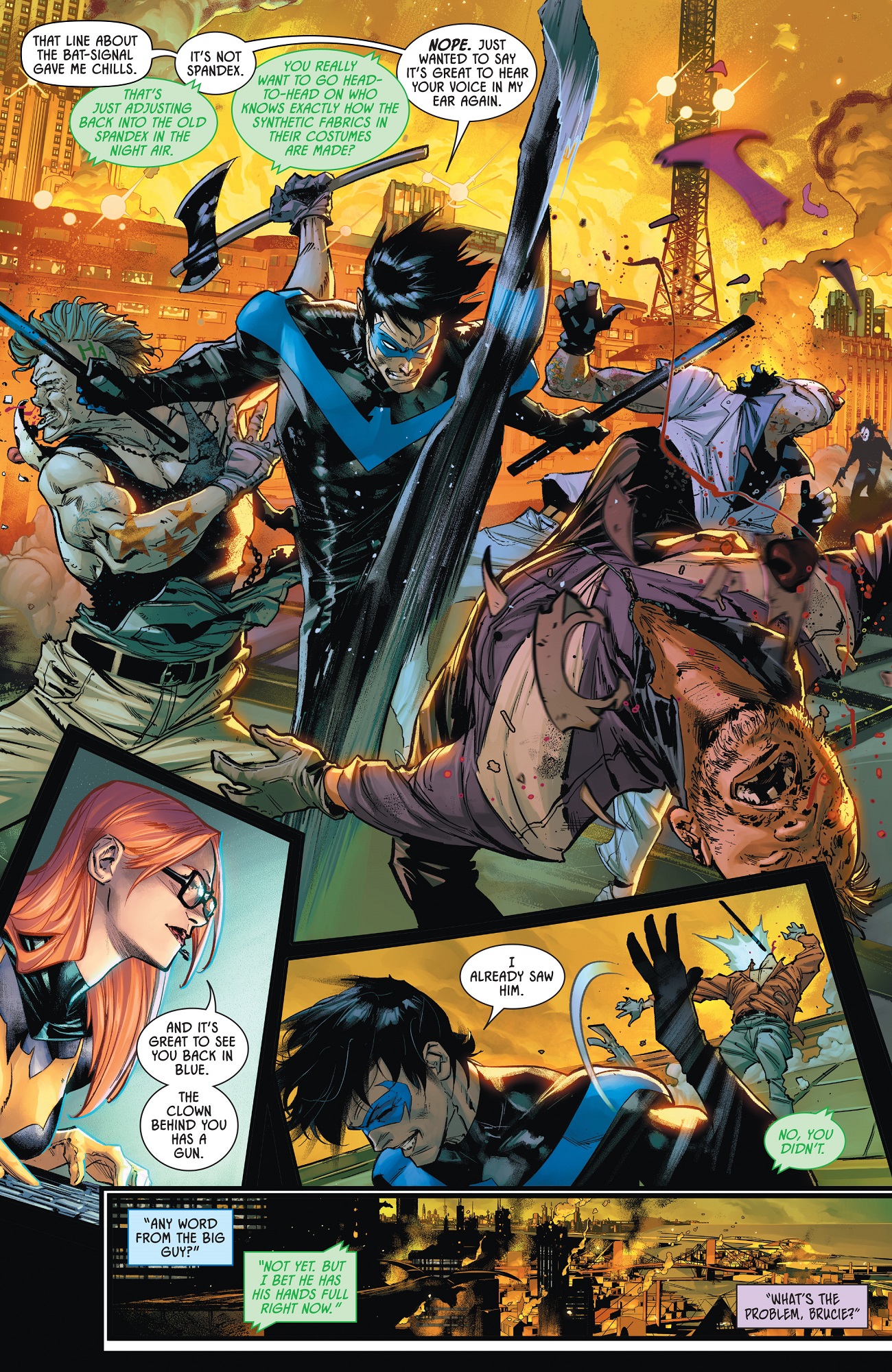 It could have been an act of triumph to have Barbara “reclaim” her Oracle identity from the Joker, since he unintentionally created it. However, there doesn’t seem to be any compelling reason for Barbara to assume the Oracle identity again other than the Bat-Family needs someone to coordinate. Maybe Batgirl #50 will change that.

The same can be said for the “stand up” moment for Harvey Bullock. Why does he decide to take charge now, after being an ineffective boob for the past five issues? Just because it would make for a great scene?

In general, the event has had a strange structure. It introduces a ton of plotlines that seem to teasing towards something interesting, but they end up being non-factors or red herrings. For me, that made for a frustrating read.

Like, Clownhunter? Surprisingly, he doesn’t play any role in the main narrative. Did Tynion forget to include his own character into the story? Or the Joker’s plan for movie theaters? Barely registered as background noise. These narrative dead ends come across as really messy writing.

Batman #100 has a lot of ups and downs. It succeeds in delivering a smash-bang conclusion, but the logistics of why things occurred is thin. While it’s fun, it also feels very shallow, because of unfocused writing and poor set-ups.