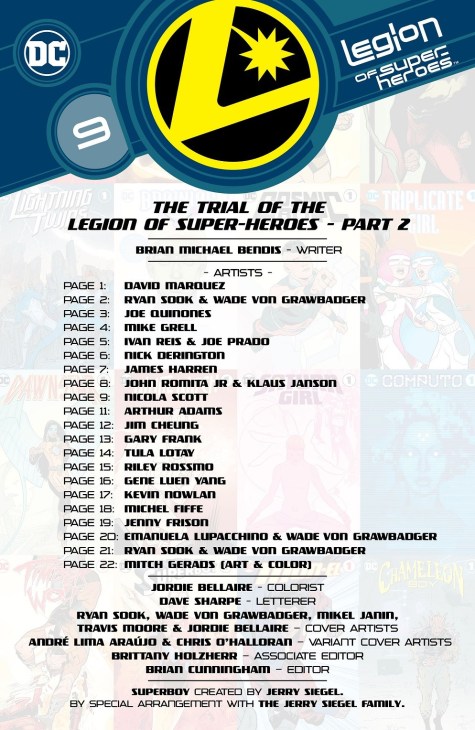 The United Planets have found the Legion guilty of crimes against the galaxy, and it’s up to our young heroes to prove their innocence! Featuring an all-star cast of artists, this issue will feature a surprise 1,000 years in the making! Long live the Legion!

Okay… let’s mention the cover art that features cover art! That’s just a perfect tease, in that each of these characters probably deserve a one-shot comic, and some deserve an entire series.

That’s the dizziness of the Legion for this reviewer, as I’m looking at this book through the lens of a rookie Legion fan. I’m not attached to the team’s history, as I remember previous aspects of Lightning Lad and Superboy. Therefore, everything to me is new. To a seasoned reader however, this is not your parents’ Legion, and they can tell.

With that said, the Brian Bendis formula is used again, but in the form of continuing a trial that began last issue, and is wrapped up this one. No clogged dockets in the future! We find entire pages devoted to Shadow Lass and President Brande presenting their cases.

In terms of the story line, we have to remember that these are teens, or young adults, so each presentation by Bendis in his writing rings true. To extrapolate, statements like “We don’t answer to the United Planets” is what a young adult would say to recruit a friend to join their “club”.

The “He Said/She Said” of the trial, and presenting the Legion recruiting process is akin to that of a college team, fraternity, or sorority.  Things are said in the heat of recruiting that may or may not come to fruition. That’s how this trial could be wrapped up so soon.

Maybe Bendis has kids this age, because he totally gets the young mind, and how it works.

On The Road to Recruitment

Speaking of these recruiting conversations, this is a great “testimony” piece, which is what makes all of these artists contributing to this issue work. We get to see “flashbacks” through a character’s memory, and it’s natural for these to all have a different vision. That being said, I enjoyed this type of transition in the story, as opposed to one scene jumping from artist to artist. The story worked in concert with the art. 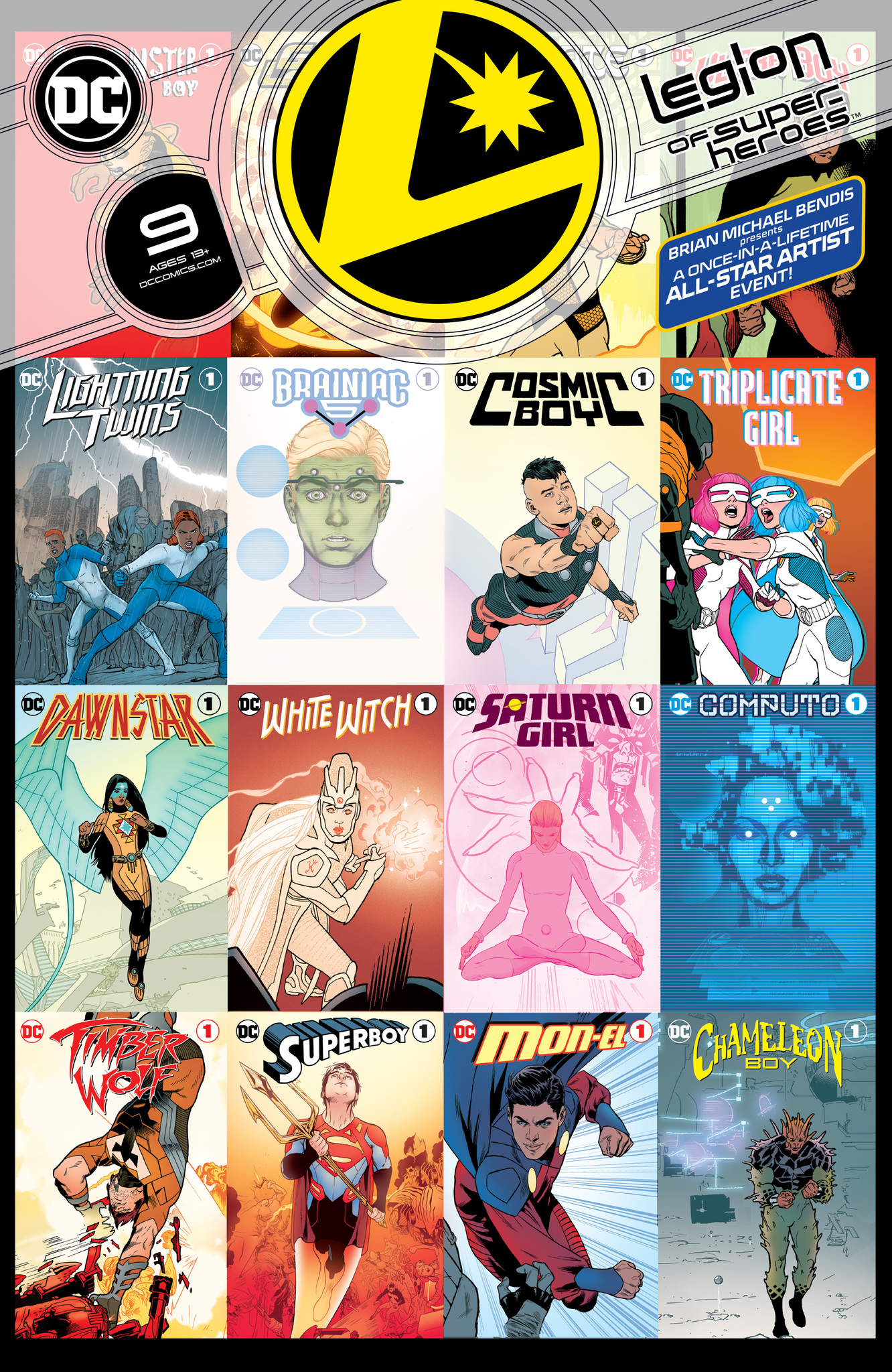 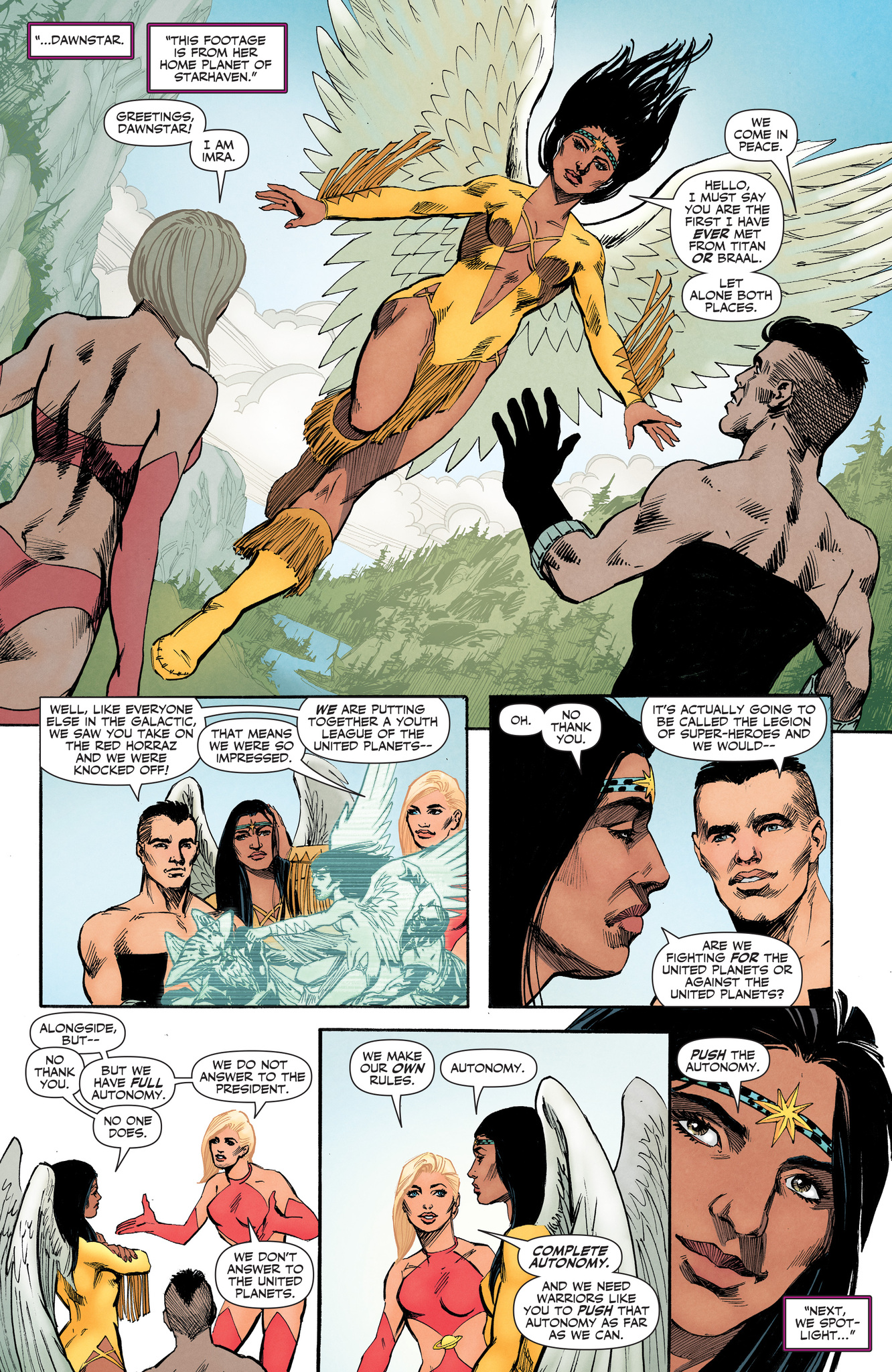 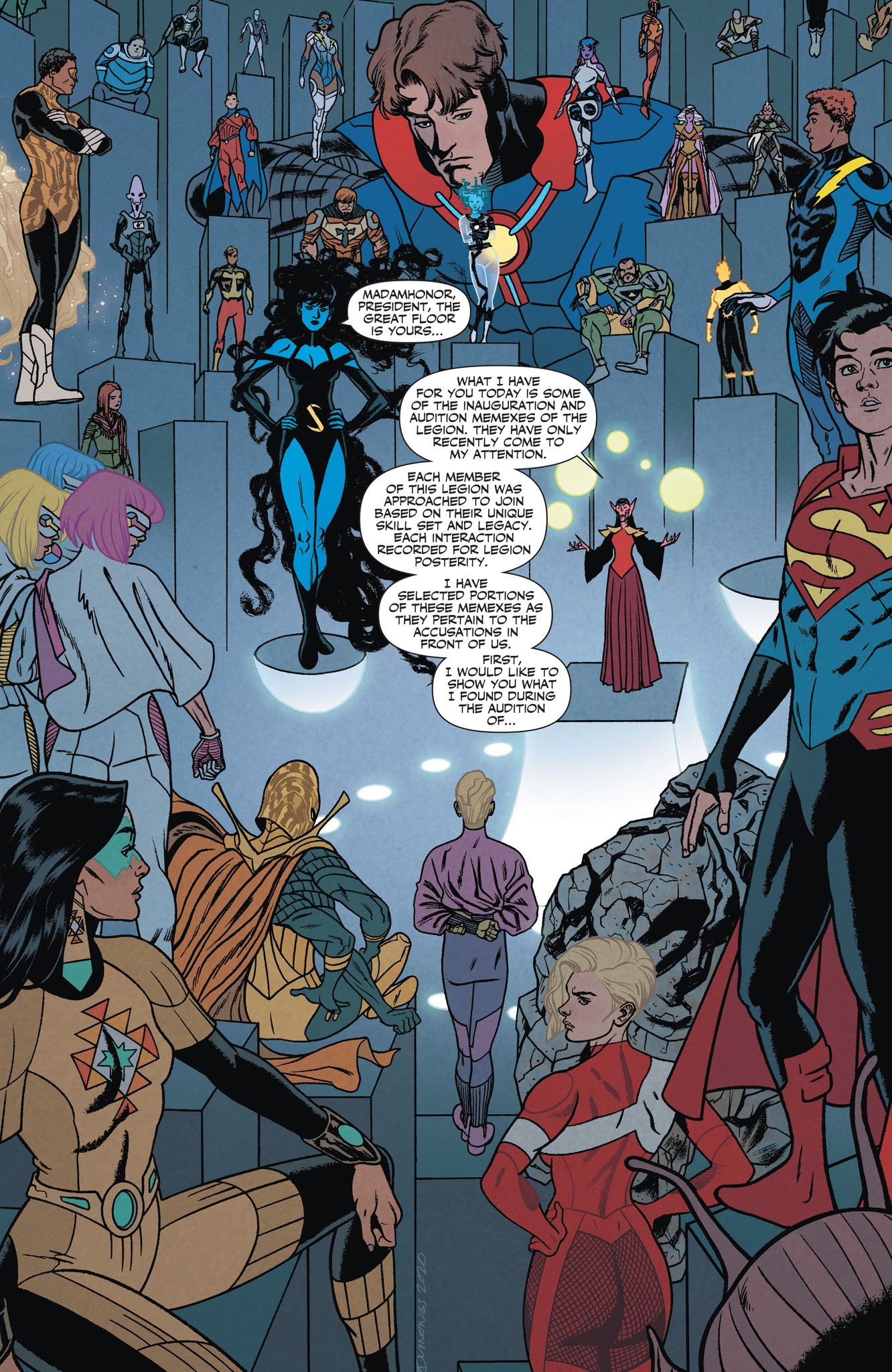 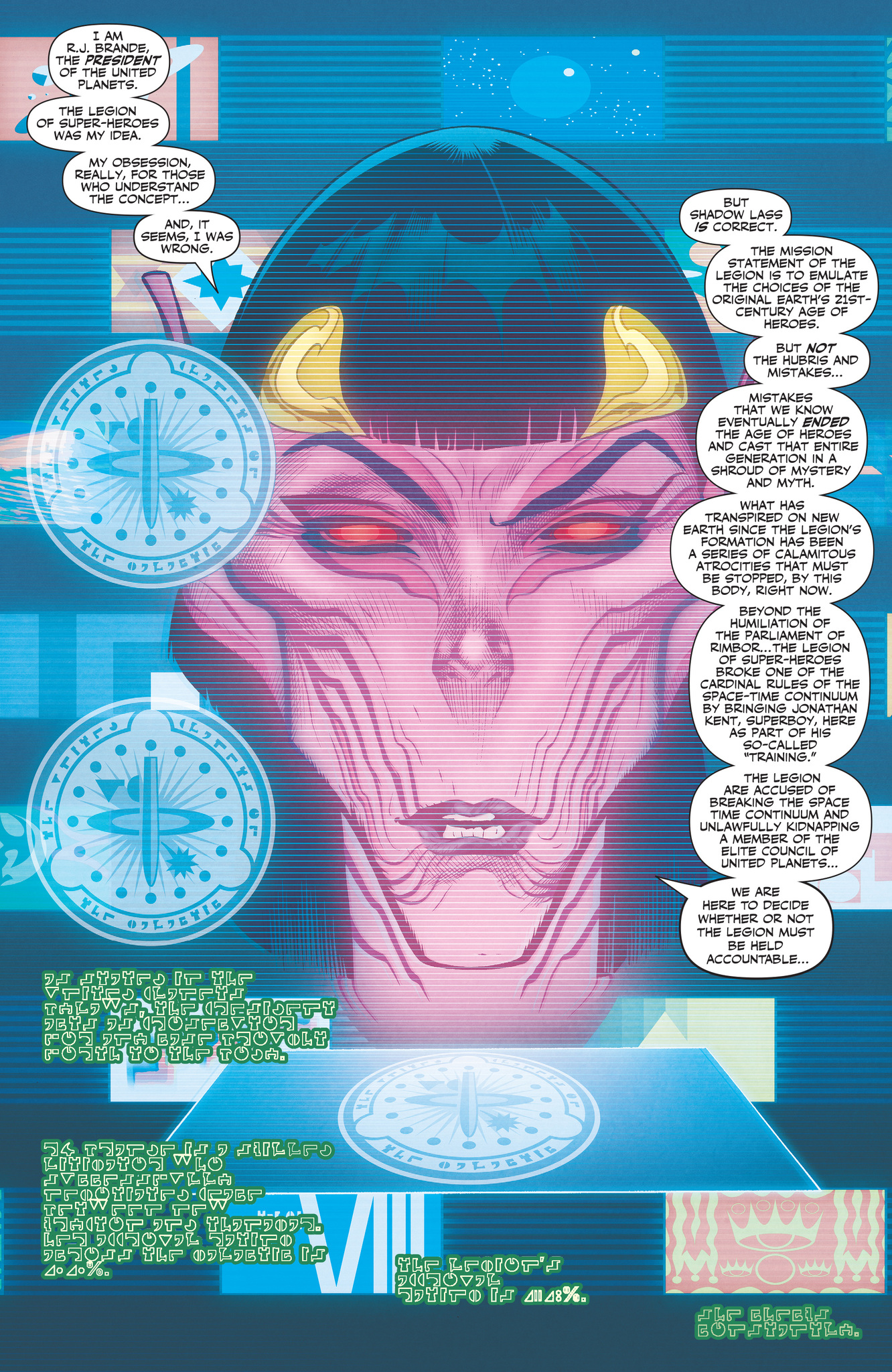 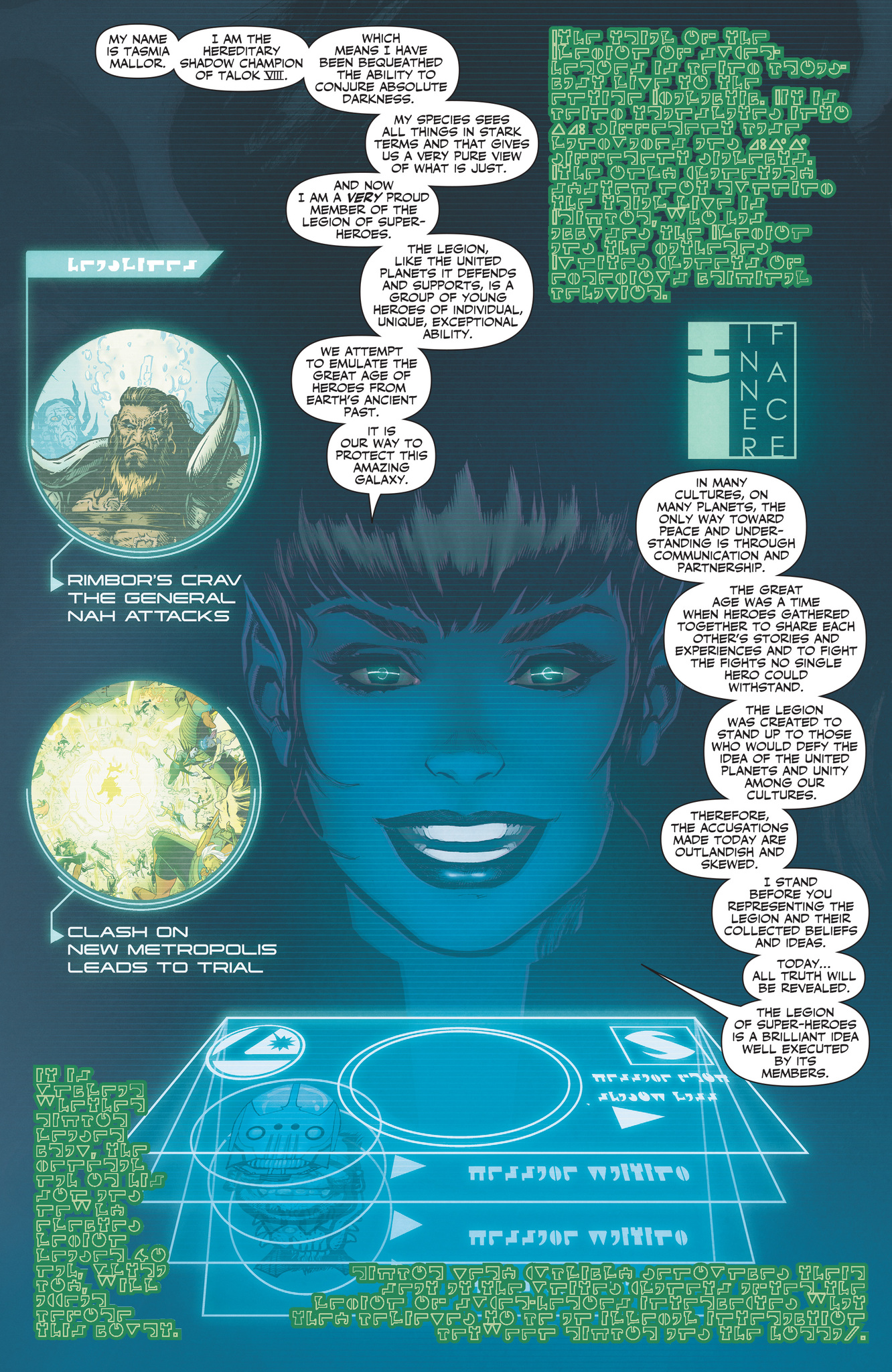 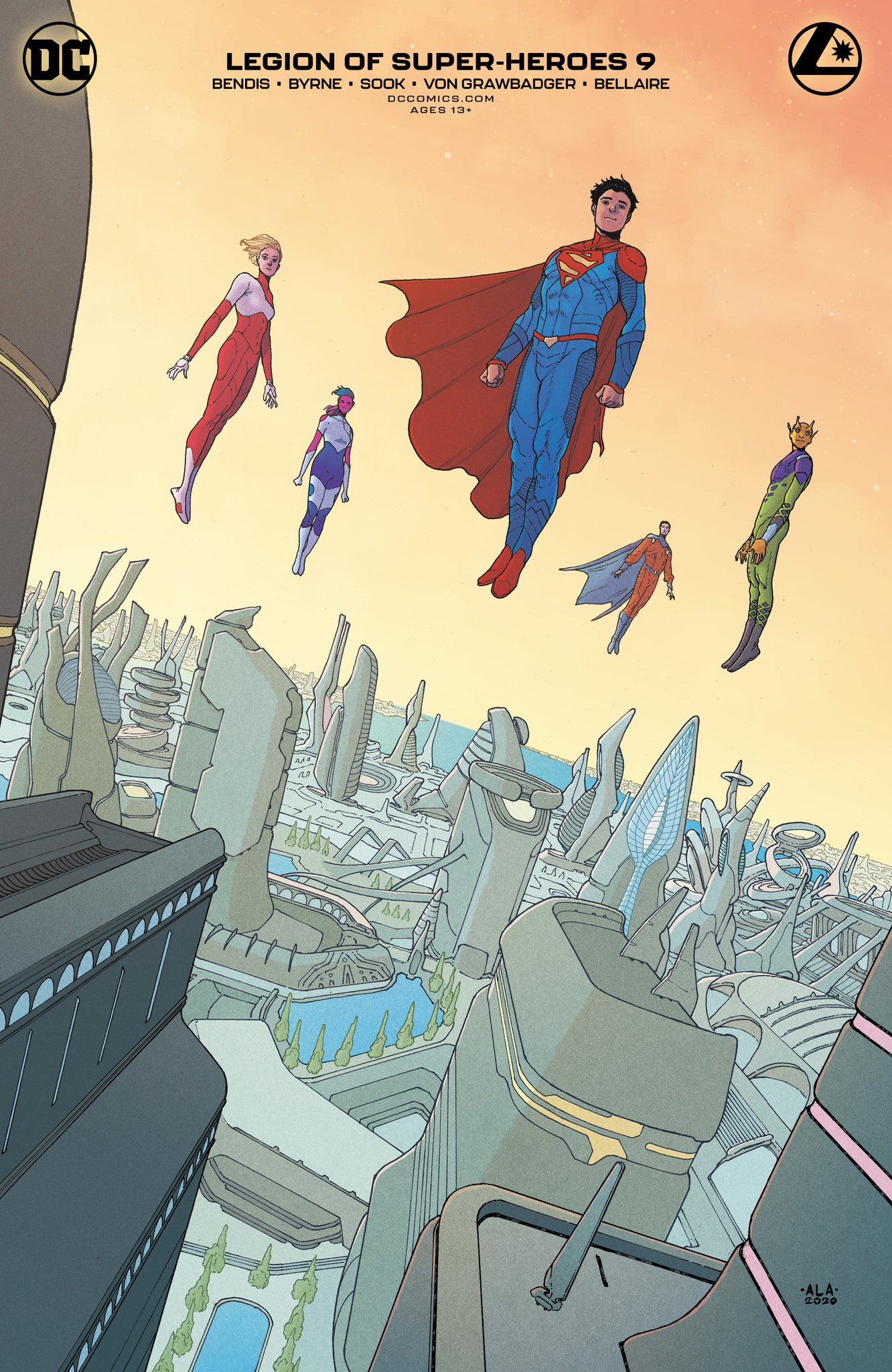 To quote The Big Lebowski “You’re Out Of Your Element, Donny!” There are homages to storylines of the past Legion incarnations, and there are artist renderings and script subtleties in naming that would drive a Legion fan of old bananas! If you’re accepting of this new Legion comic, you’ll do fine! If you like your Legion with the continuity that you feel it deserves however, your blood pressure may well boil over! This is even more true when considering the story line of the coming chaos that is “The Great Darkness”. If you know about it then…. well, you know it. If you don’t, you should still be fine.

It’s your choice as a reader how much energy you may want to devote to picking this comic apart, or just enjoying it for what it’s worth.

This Kiss… This Kiss – Faith Hill

Romance: “Saturn Girl and Superboy, floating Near a Tree… K-I-S-S-I-N-G!”

I think that he’s grown up a bit too fast; he was just a little boy and now, he’s getting his first kiss. I smell a big story turn, both here and in Superman comics. This isn’t little Jonathan Kent who went with this Grandfather to remote parts of outer space, just to return as a twenty something!

Bendis could spend a LOT more time developing sidebar issues for this comic, as to me Legion is DC’s version of the X-Men. There are so many heroes that I find myself referring back and forth to the dialogue, the name tags, and Wikipedia.

I appreciated all the artistic interpretations, but it’s time for this book to become grounded, and get out of the Bendis formula. Over in Three Jokers, Geoff Johns is telling stories with six to seven frames a page. I need more meat on these Legion bones!