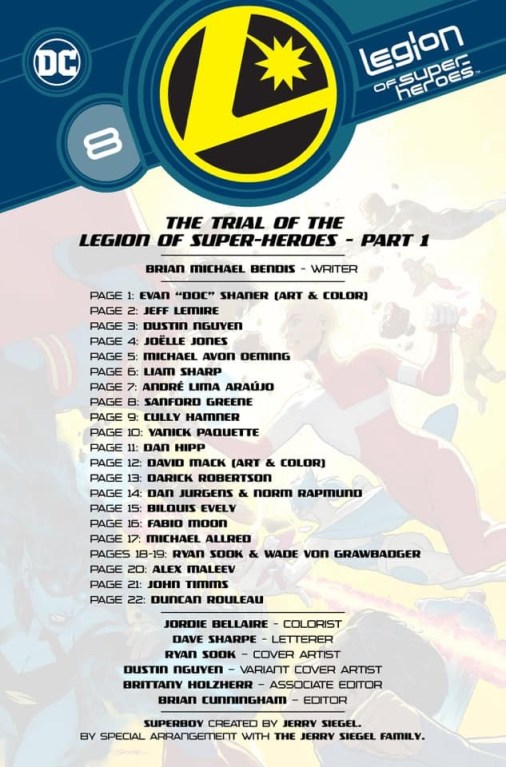 Welcome to the 31st century and Legion of Super-Heroes #8!

Beginning a special two-part comics storytelling event! Over the course of two spectacular issues, 44 artists will dive into the 31st century, with each page starring a different Legionnaire! It starts when the team is arrested by a galactic authority that does not approve of the Legion. This leads into an intergalactic showdown that will affect every member of the team!

As you settle in on this series, you find yourself getting used to Bendis’ formula: Introduce, or re-introduce, a member of the Legion on the first page (in this case, it’s Superboy), providing a synopsis of the story thus far through his eyes.

It’s a good tool for new fans, but for regular readers… you can see how this can become tedious, and repetitive.

As Chameleon Boy shares some of the files about the Legionnaires with his mom, it’s a great opportunity for a new readers to get acquainted with all of this roster.

This is a busy book from the start.  I admired Bendis for using the floating name tags, and those are still necessary, as well as the formal way the Legion speaks in battle ie. “Way to go Wildfire!”

The impending trial is what drives the book, as we read the conversations  between Chameleon Boy and President Brande. By seeing all the different characters’ stories flesh out, and keeping the trial  at the forefront. 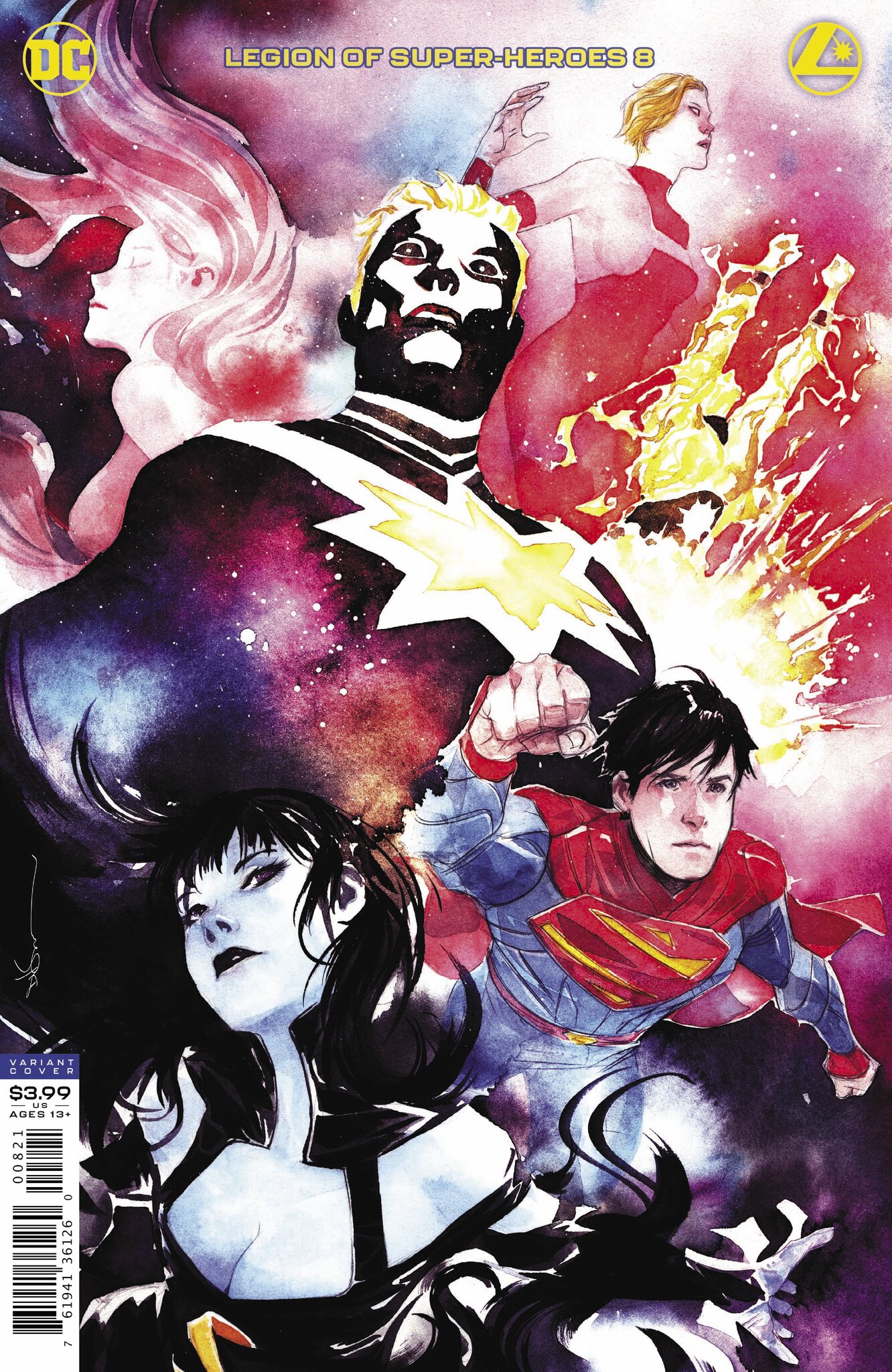 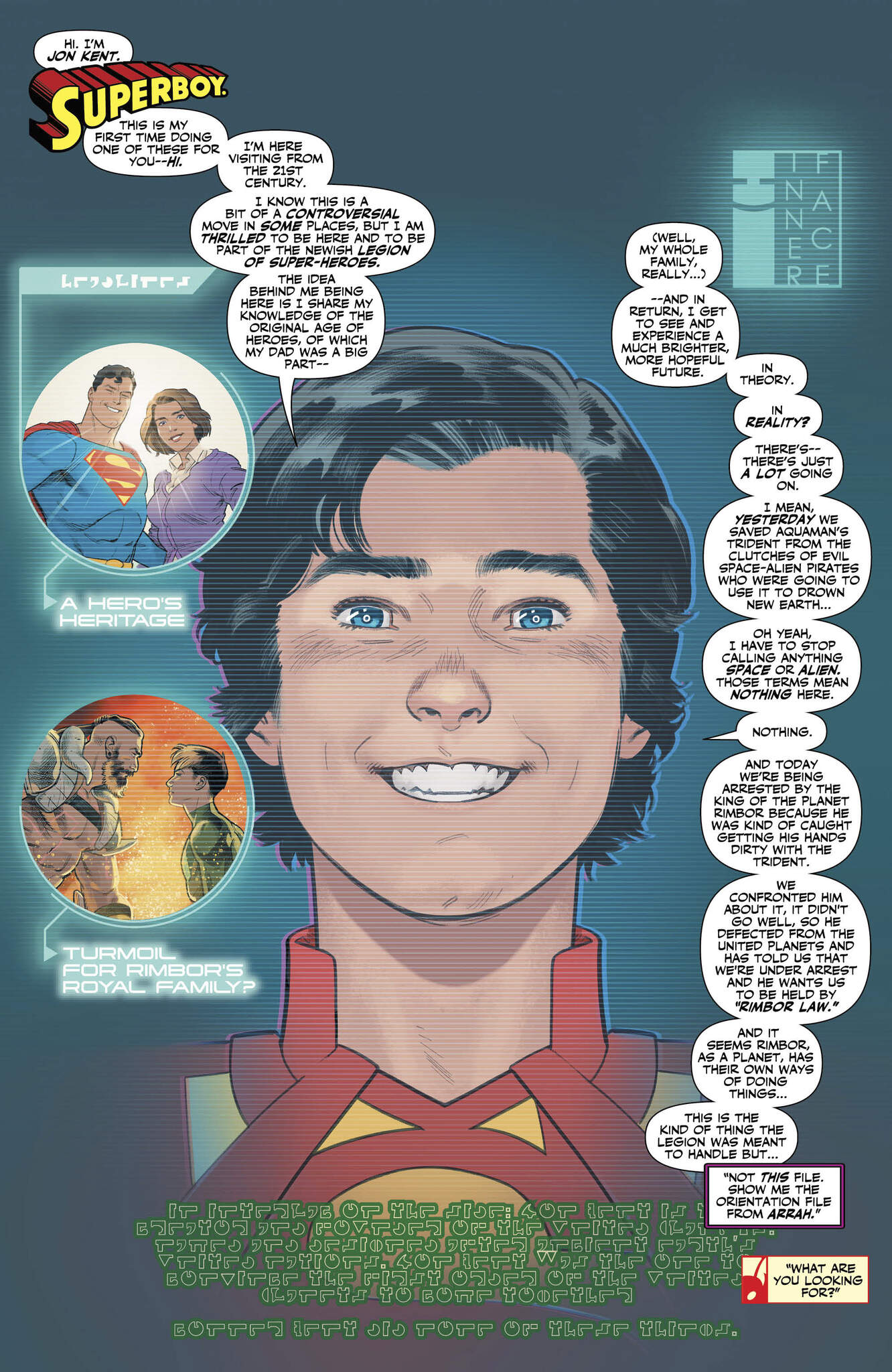 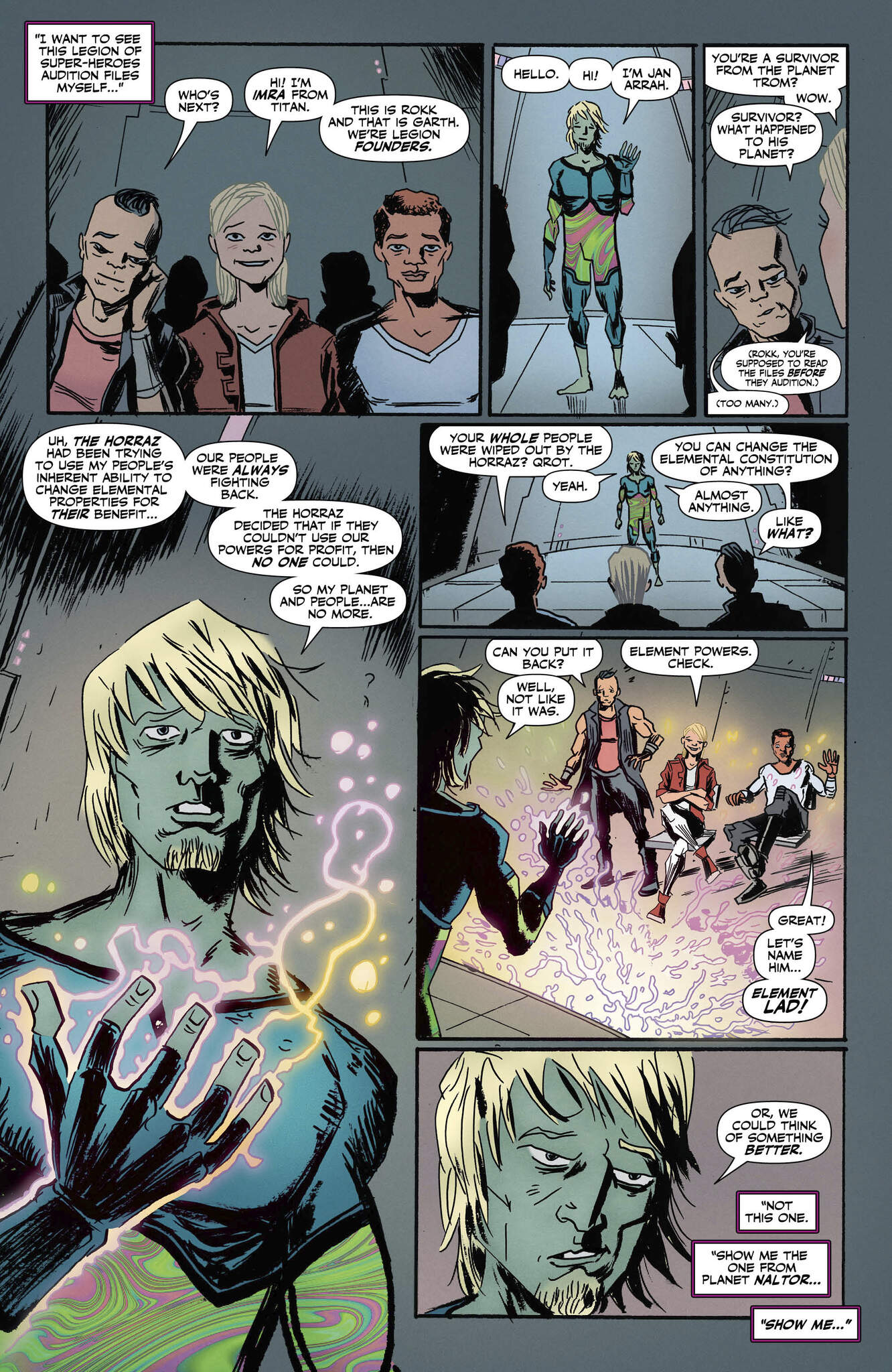 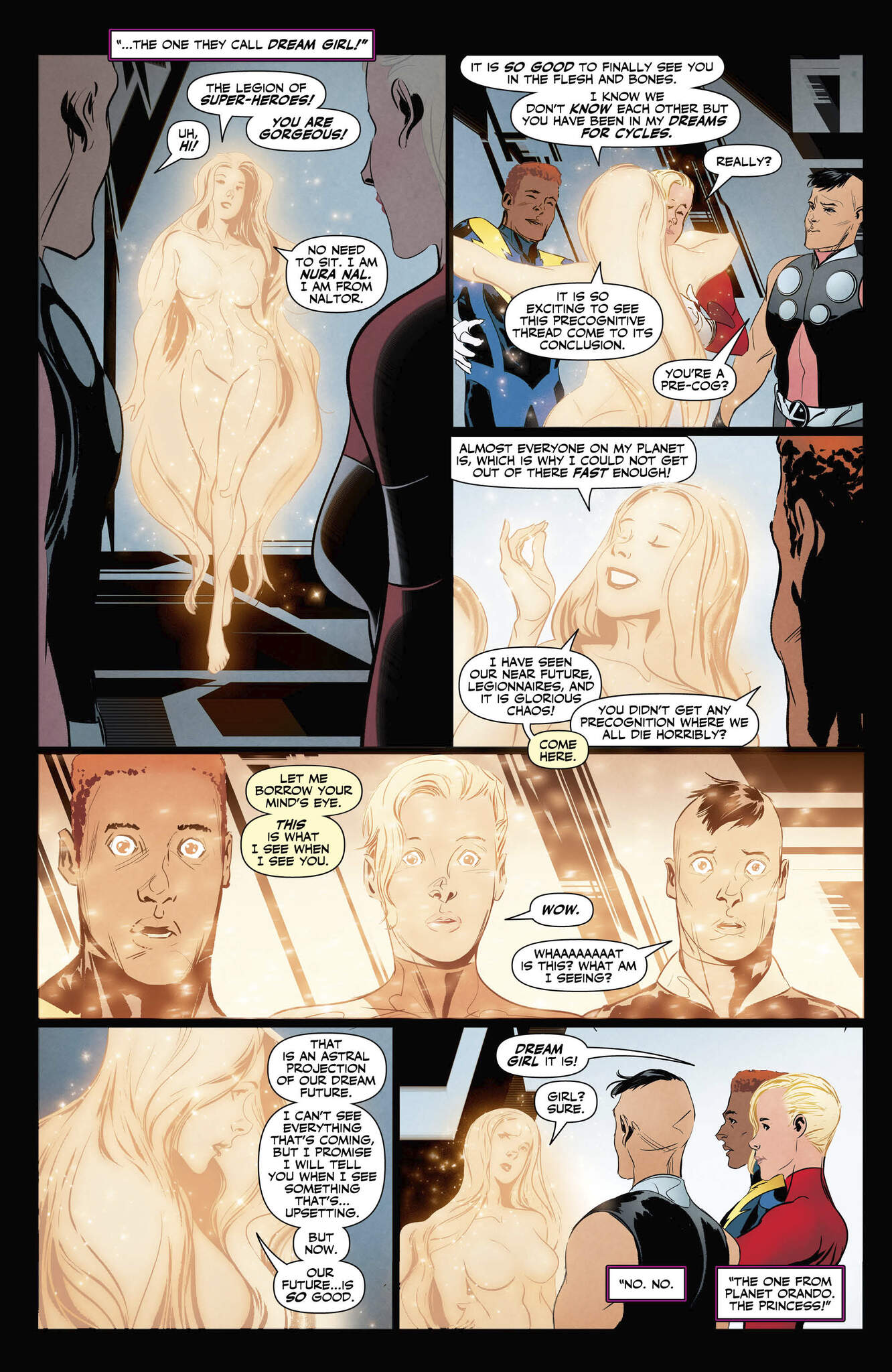 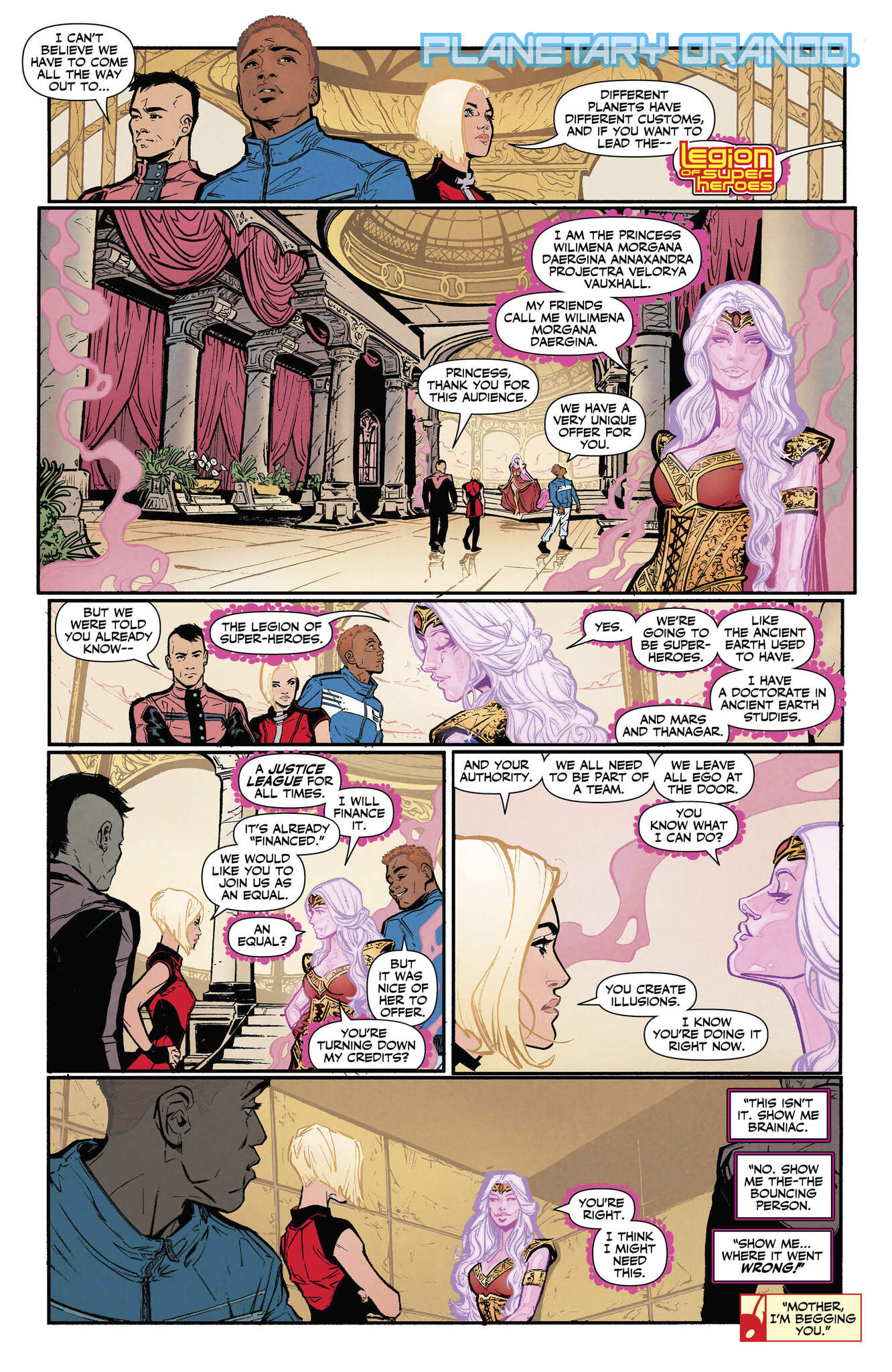 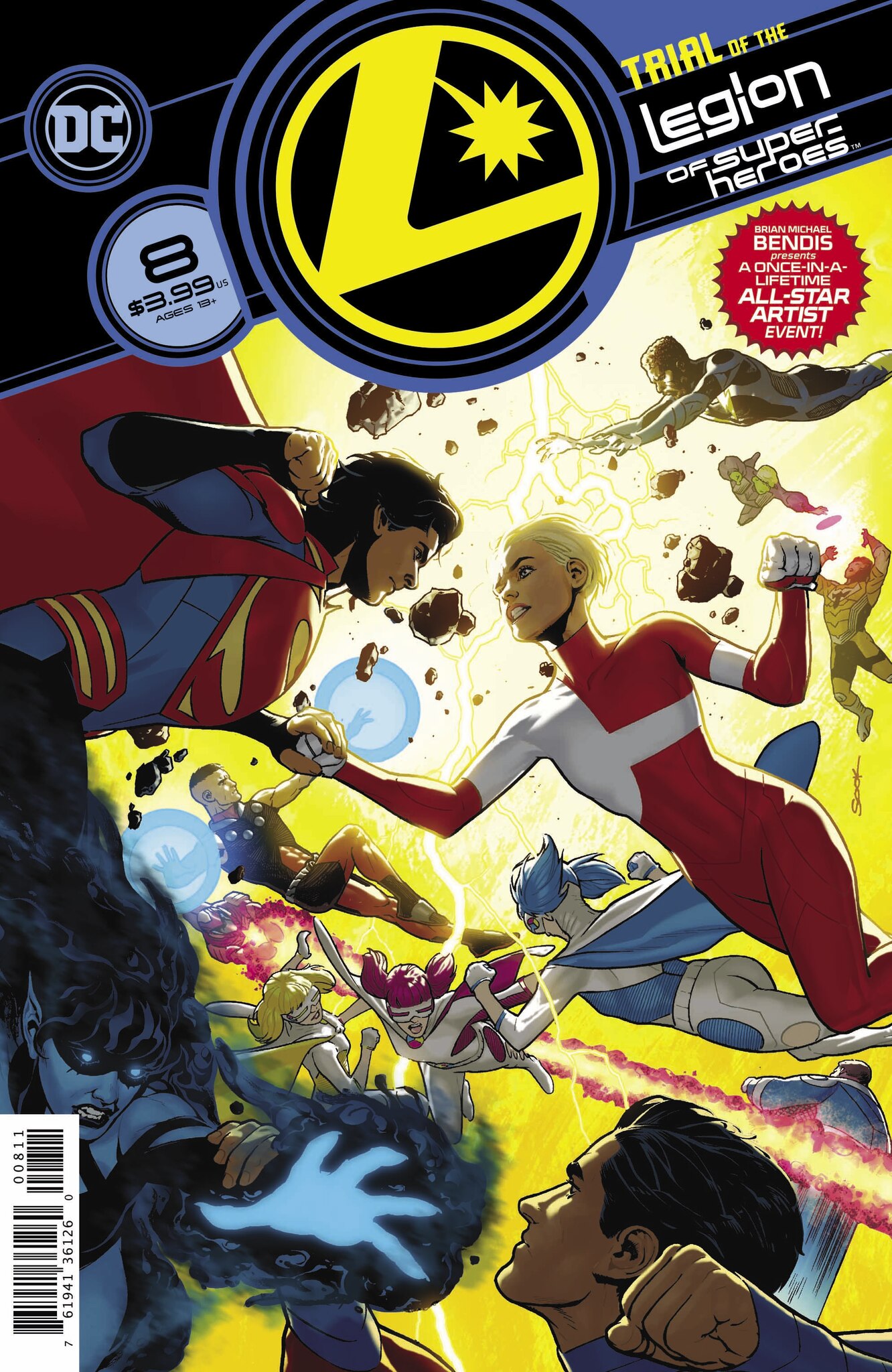 Okay… have you ever had just thirty minutes to dash through an art museum? That’s how I felt when I turned each page of this book. I wanted the story, but the artistic interpretation of each character distracted me so much.  It was like trying to figure out the voice over actors’ names in a cartoon movie, or a commercial.

I found myself going to the every image and comparing each interpretation of the character to the book(s) they’re currently in! Am I going too deep? Perhaps, but as much as I love each of these artists, I prefer to have continuity in what I’m going to see in a book. Again, what an all-star cast… but with every page I needed to slow down, look up the artist (or guess) and then try to get back into the story.

What a privilege to meet your Grandfather to the fifth power (math majors will get that!), but something is amiss… Mon-El obviously doesn’t want Jon Kent around, you’ll find out why in Legion of Super-Heroes #8, but apparently we’ll get to it in more depth next issue.

Bendis’ work on the Legion is becoming a bit formulaic. It’s a huge task with a LOT of characters to keep new and old readers involved in the team, and the storyline. For me the series is dragging, but  that’s to be expected with so many people involved, and with Bendis wanting to pay tribute to all the Legion members.

Will things improve? Only time will tell!