“Son Of The Joker” 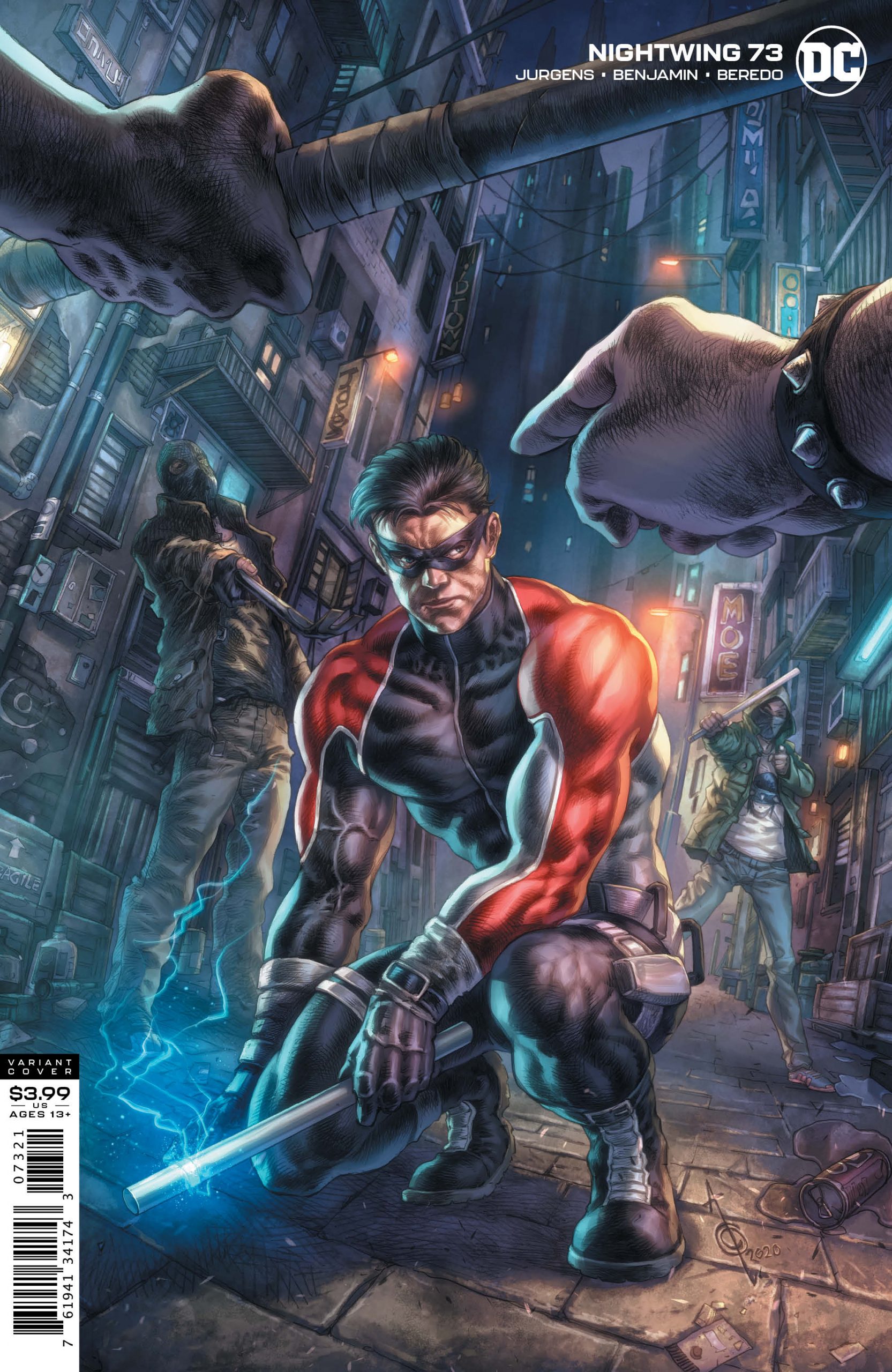 Wow. Nightwing #73 completely knocked me for a loop. Not only do we see a brutal physical battle between two characters who should not be fighting each other at all, but there’s also a far more psychological war happening at the same time. Dan Jurgens has written a clever, yet completely action-packed story, that works on so many levels.

We even get a little side story starring the ever-impressive Punchline. So, though this is clearly and visibly a Nightwing comic, the ties to the ongoing “Joker War” epic should really please fans picking the book up just because of the crossover. This is a very well handled issue, indeed.

Everybody knows that Dick Grayson is one of the greatest hand-to-hand combatants in the DC Universe, and even with his mind addled and his reflexes dulled, he should not be taken lightly. His opponent, while not quite so physically formidable, knows how to combat and defend against those who are. What we get as a result is half an issue’s worth of high stakes battle, which is brilliantly written, and superbly drawn. 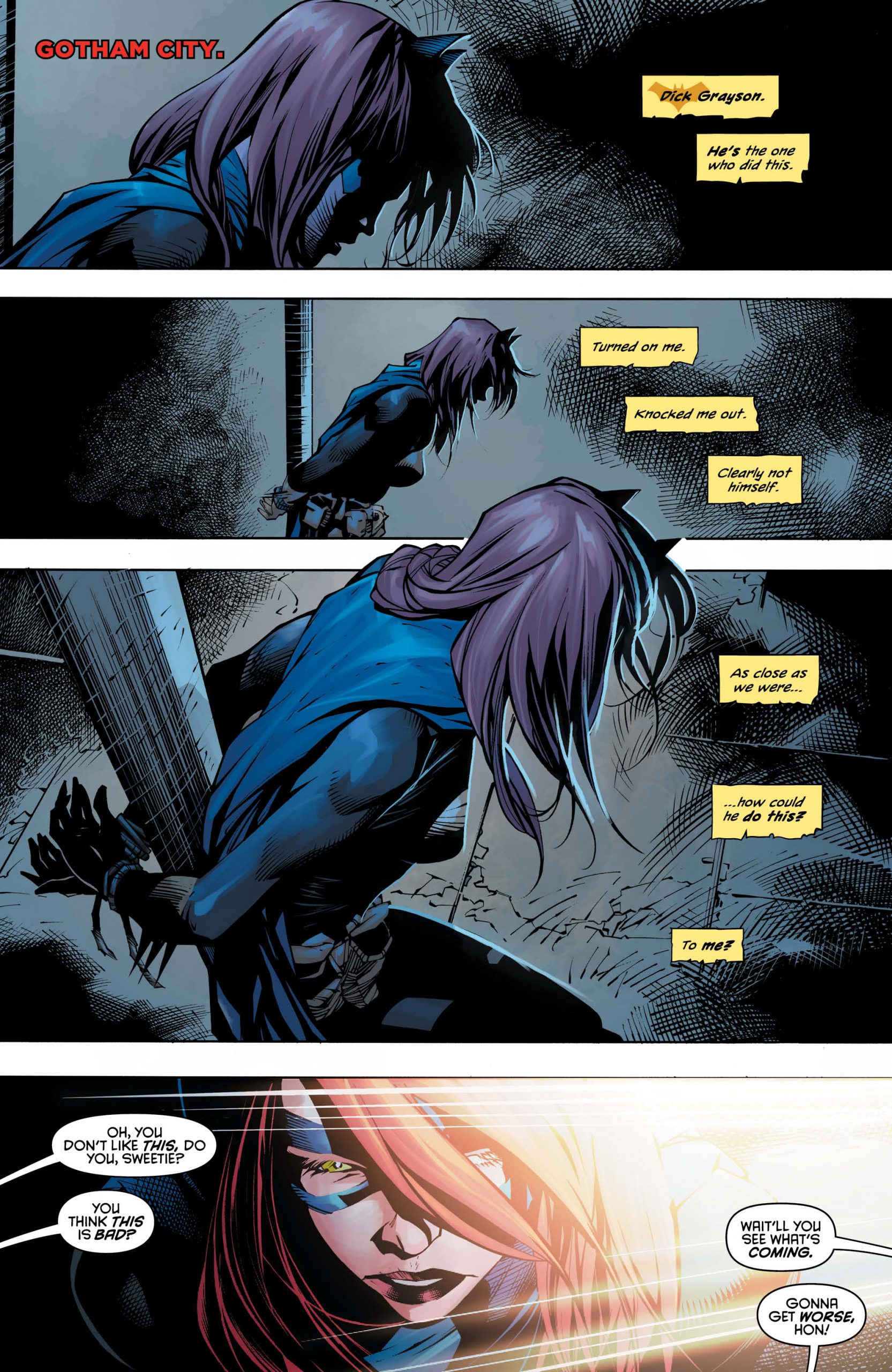 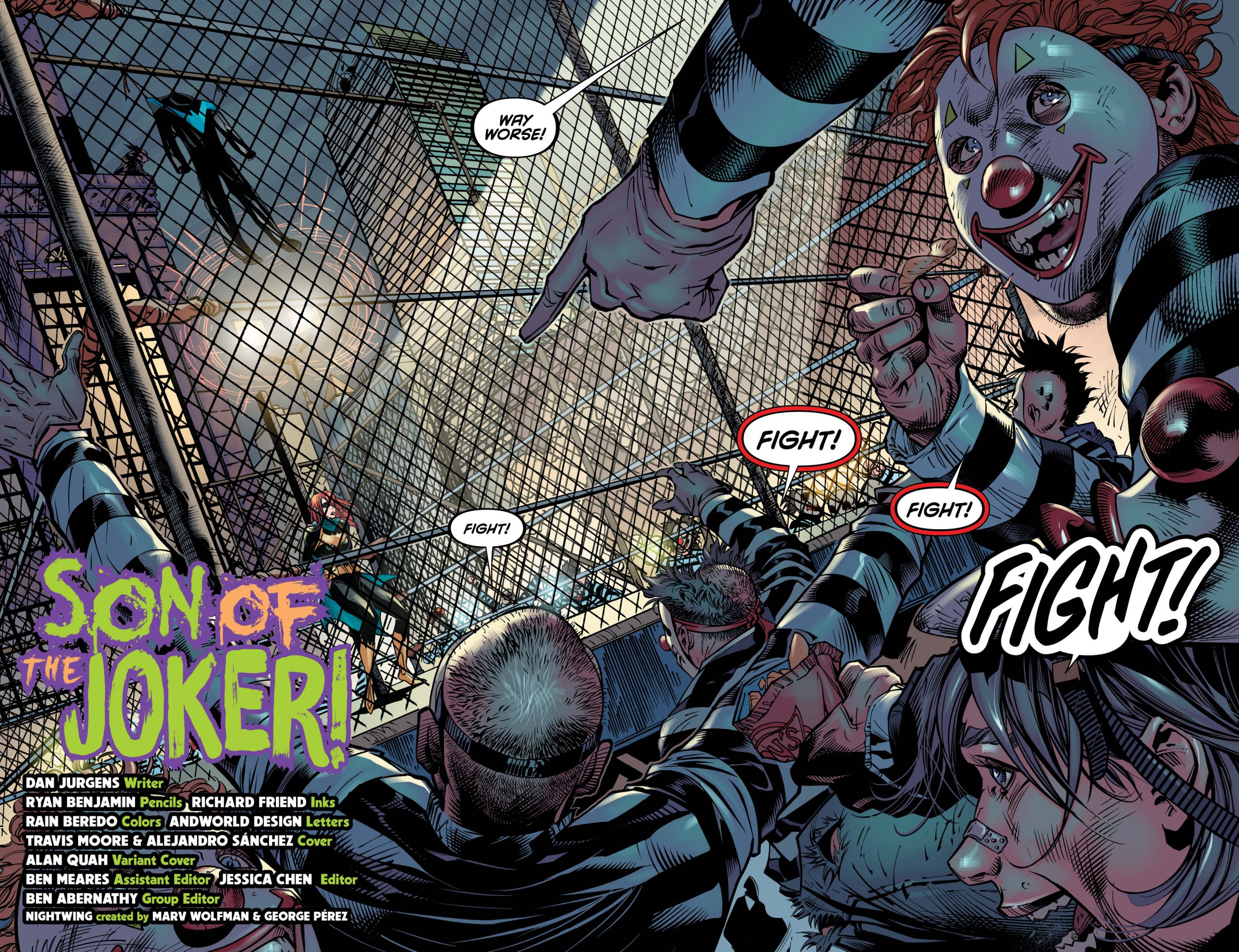 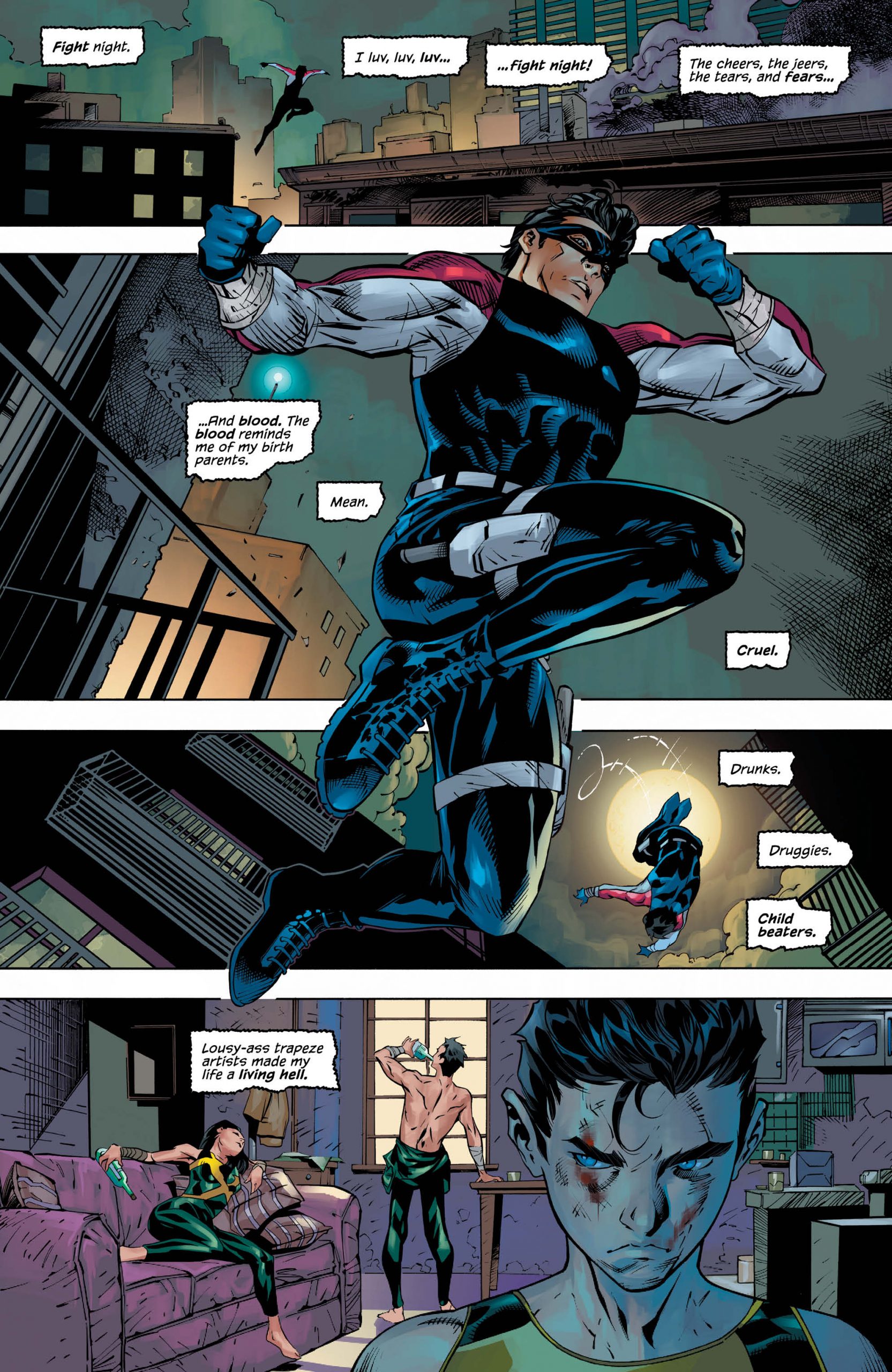 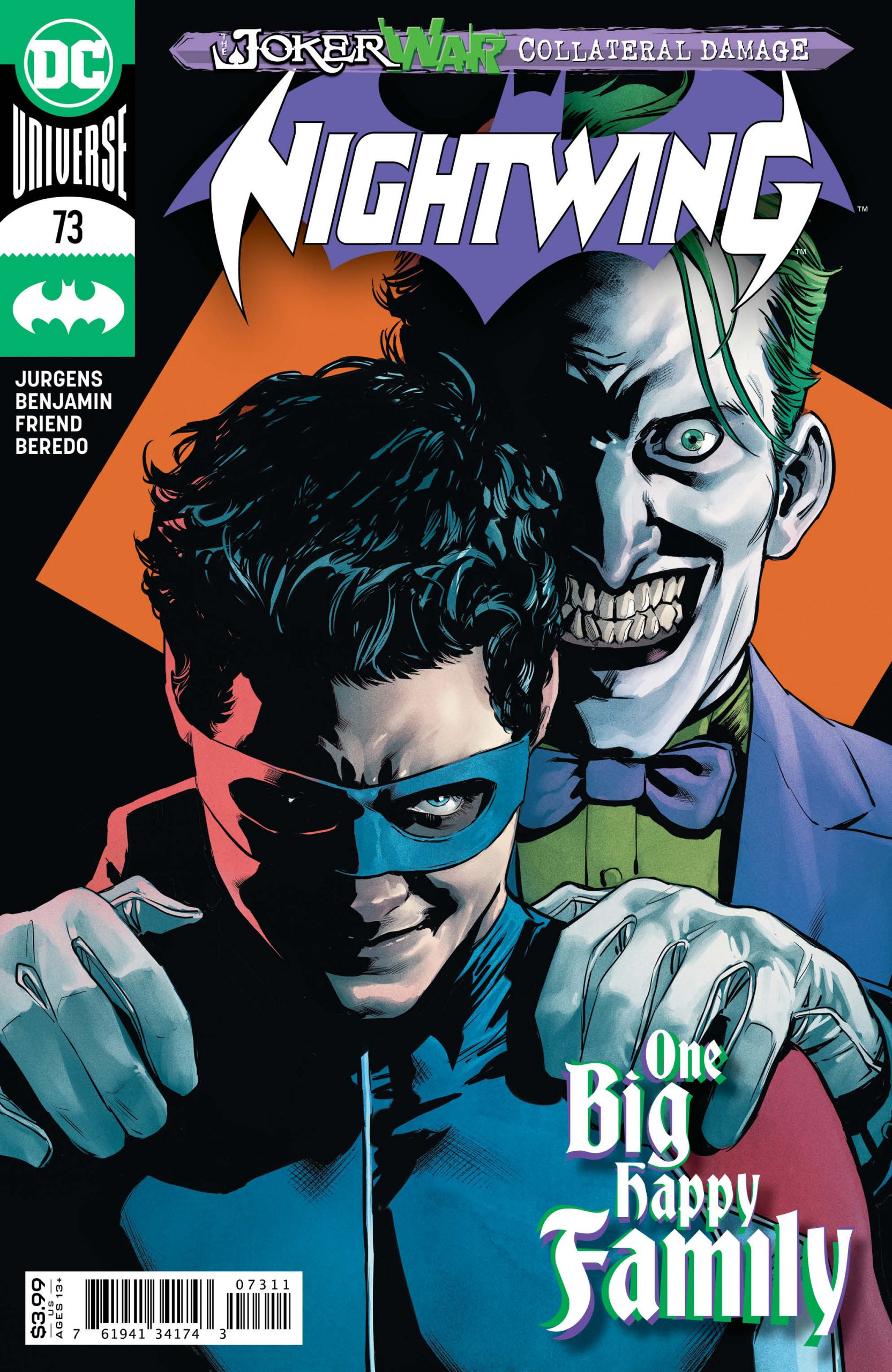 Ry the Guy, and his Friend Richard, covered by Rain

Yup, this issue’s art is top. Ryan Benjamin has worked his magic on this title before, and he continues to impress. His action and storytelling is strong, and looks great under the textured inks and gorgeous tones provided by Richard Friend and Rain Beredo. From eerie images like seeing Dick’s Nightwing costume, (most recently worn by his new “dad”, the Joker) hanging above the battle arena, to the villain’s joy at his corruption of one of comics’ all-time greats, the visuals in Nightwing #73 are very good indeed.

AndWorld Design’s lettering in the issue is also top-notch. I love the way that Dick’s narration is very different to Barbara’s; you clearly know who’s speaking, and when. Then there’s the garish, yet scary title, “Son Of The Joker” in the Clown Prince of Crime’s color scheme, yet gruesomely dripping, and slimy. Add to all this the sounds of battle, crowds booing, cheering, and jeering, and the atmosphere is made even more tense, and disturbing.

I speak to many friends and reviewers, and know that this entire arc has really divided audiences. One dear friend, and a writer whose work I highly respect, despised this issue as much as I loved it. I know that a change is coming to these pages soon, but have really enjoyed the ride that’s taking us there.

The ending to this issue sees brothers reunited… but for how long? I think the wait for Nightwing #74’s going to be a long one.