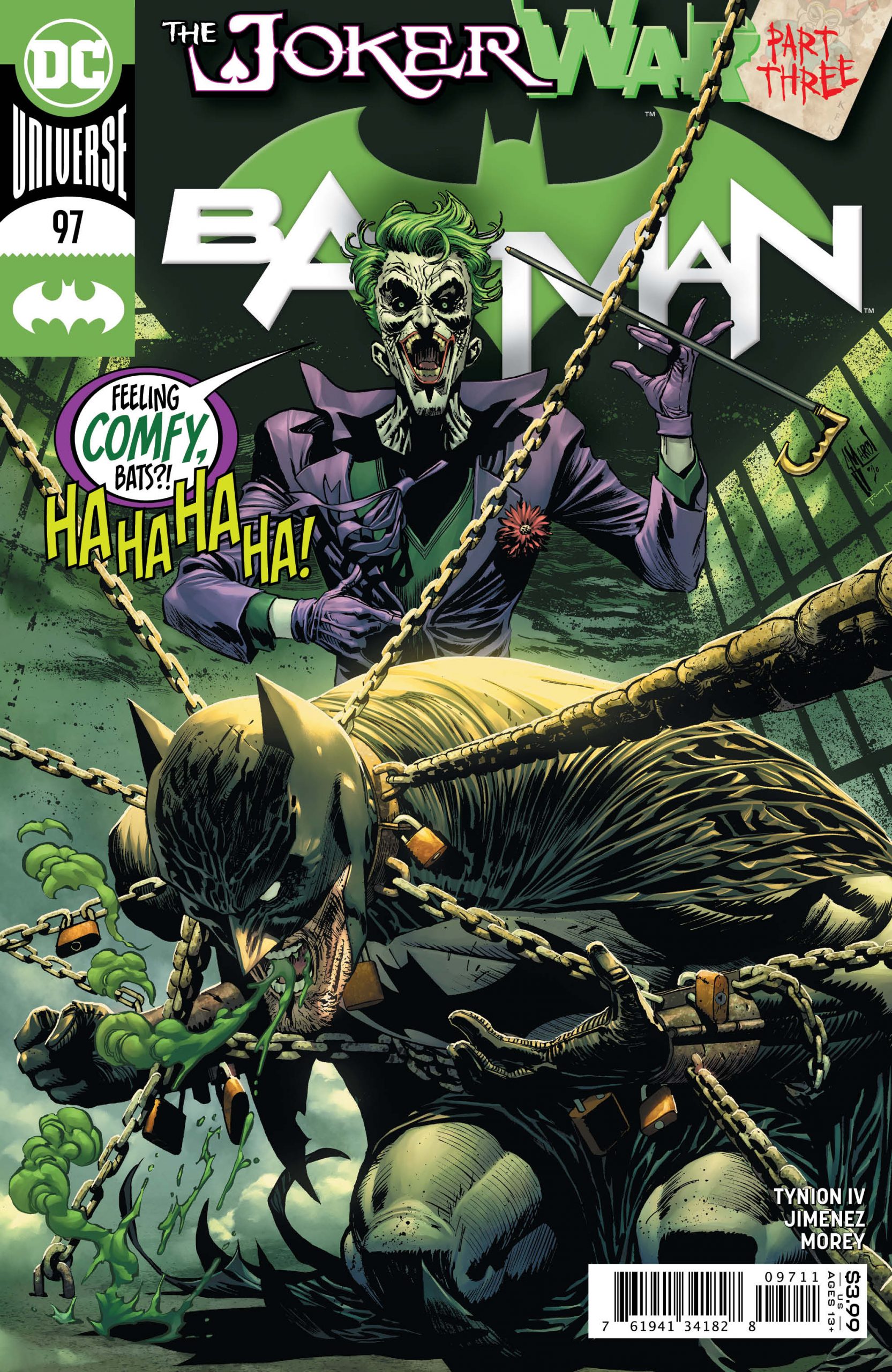 Batman #97 is another entertaining, if pedestrian, middle chapter of the sprawling “Joker War” crossover.

The middle chapters of a crossover tend to be a real challenge, as they involve a lot of setting up, and lack the anticipation of an opening issue, or the catharsis of a conclusion. It’s difficult to maintain excitement levels for such a long period. This seems to be writer James Tynion’s main challenge with “Joker War”.

Part of the reason is that the main plot of the issue doesn’t seem too lead to anywhere. The Joker’s plan to fill the Monarch Theater with zombies of his victims is a cool premise, but the problem is that it kind of rises or falls from there. The Joker doesn’t appear to have any larger goals for this plan, other than to screw with Batman’s head. It doesn’t accomplish anything in the overall story line. Because of that, it becomes a diversion rather than an important narrative piece. While it’s cool to see Batman high on hallucinogens and punching zombies, it ultimately feels like a shallow action set piece.

Despite this, probably the biggest factor why the comic is infused with so much energy is thanks to artist Jorge Jimenez’s bombastic, dynamic style. It continues to be a visual treat to see such exciting line work. His character designs tend to be top-notch too.

Specifically, the Joker looks really good. He goes from being really creepy in Batman scenes, to looking surprisingly hot-looking in the Punchline scenes. The characters are tweaked a bit, to maximize the drama in every scene and it looks great. 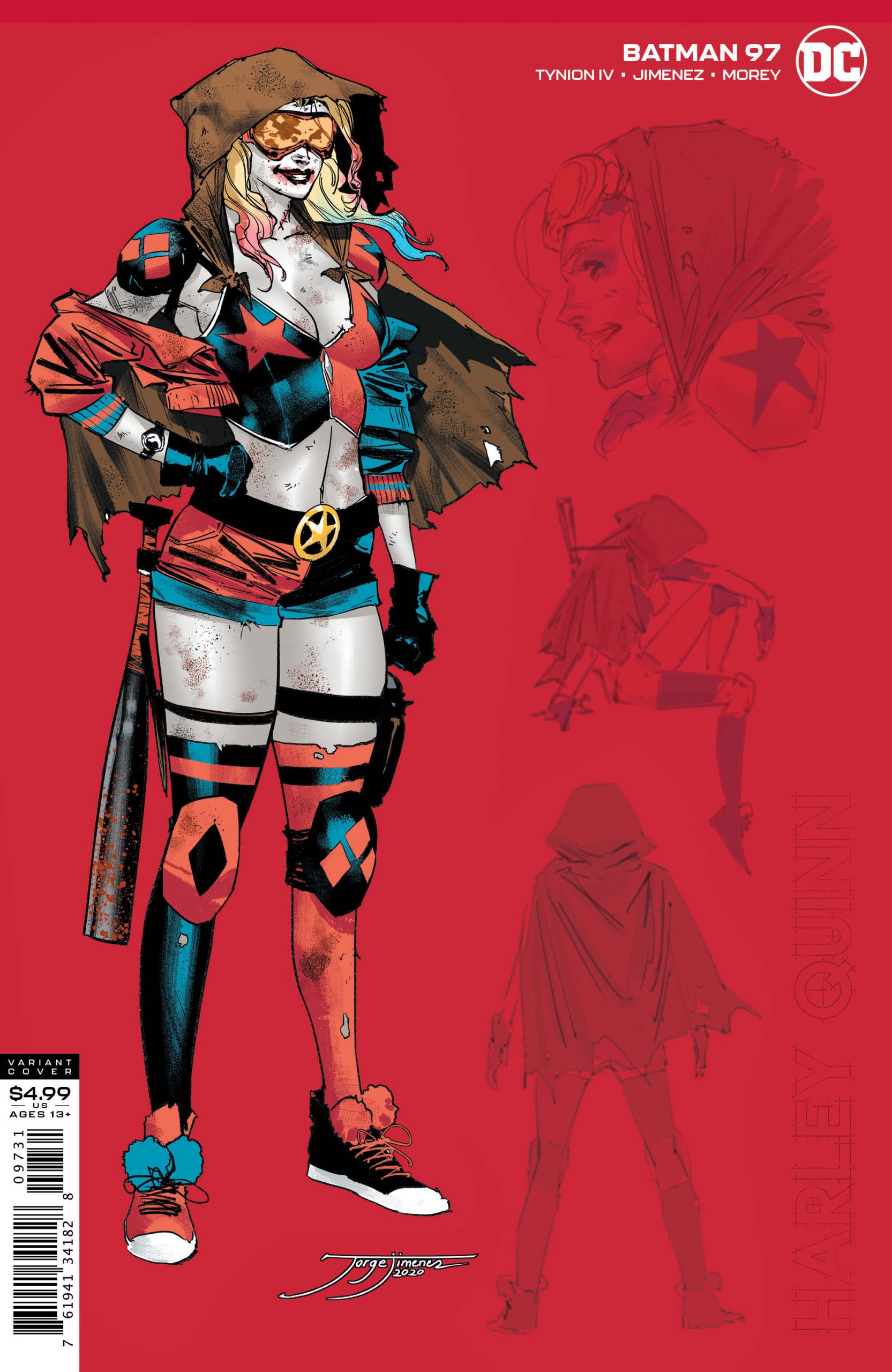 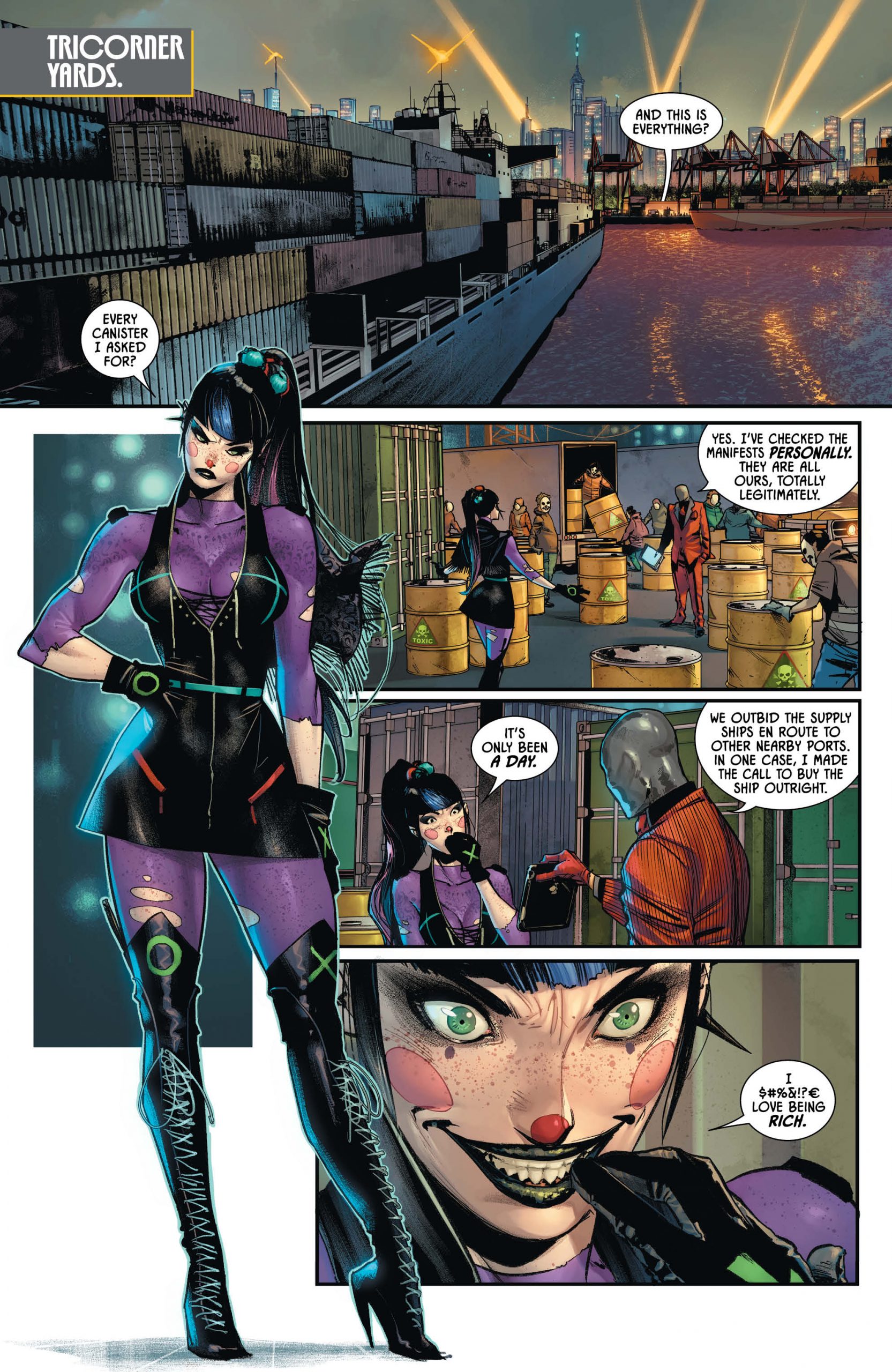 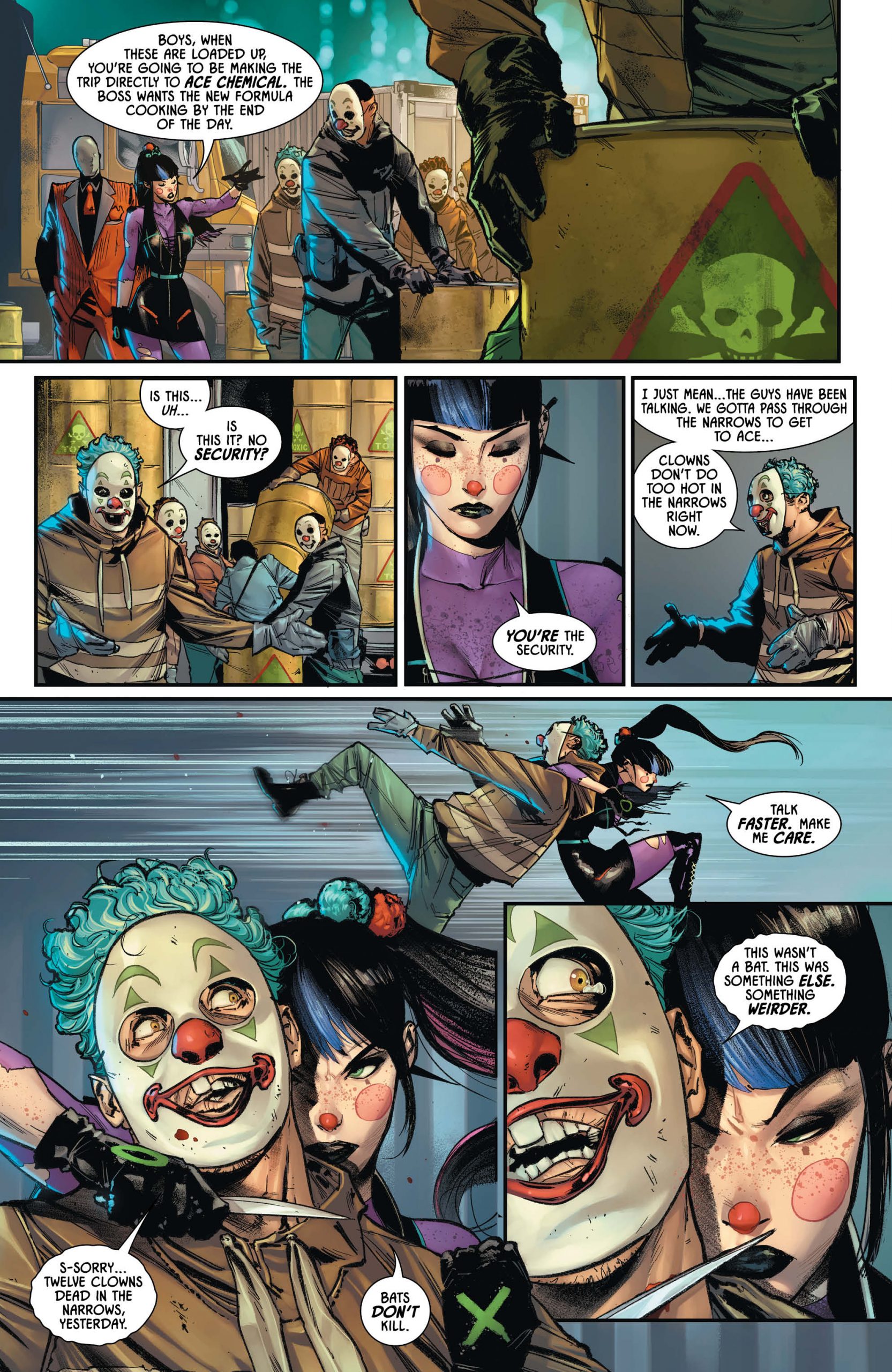 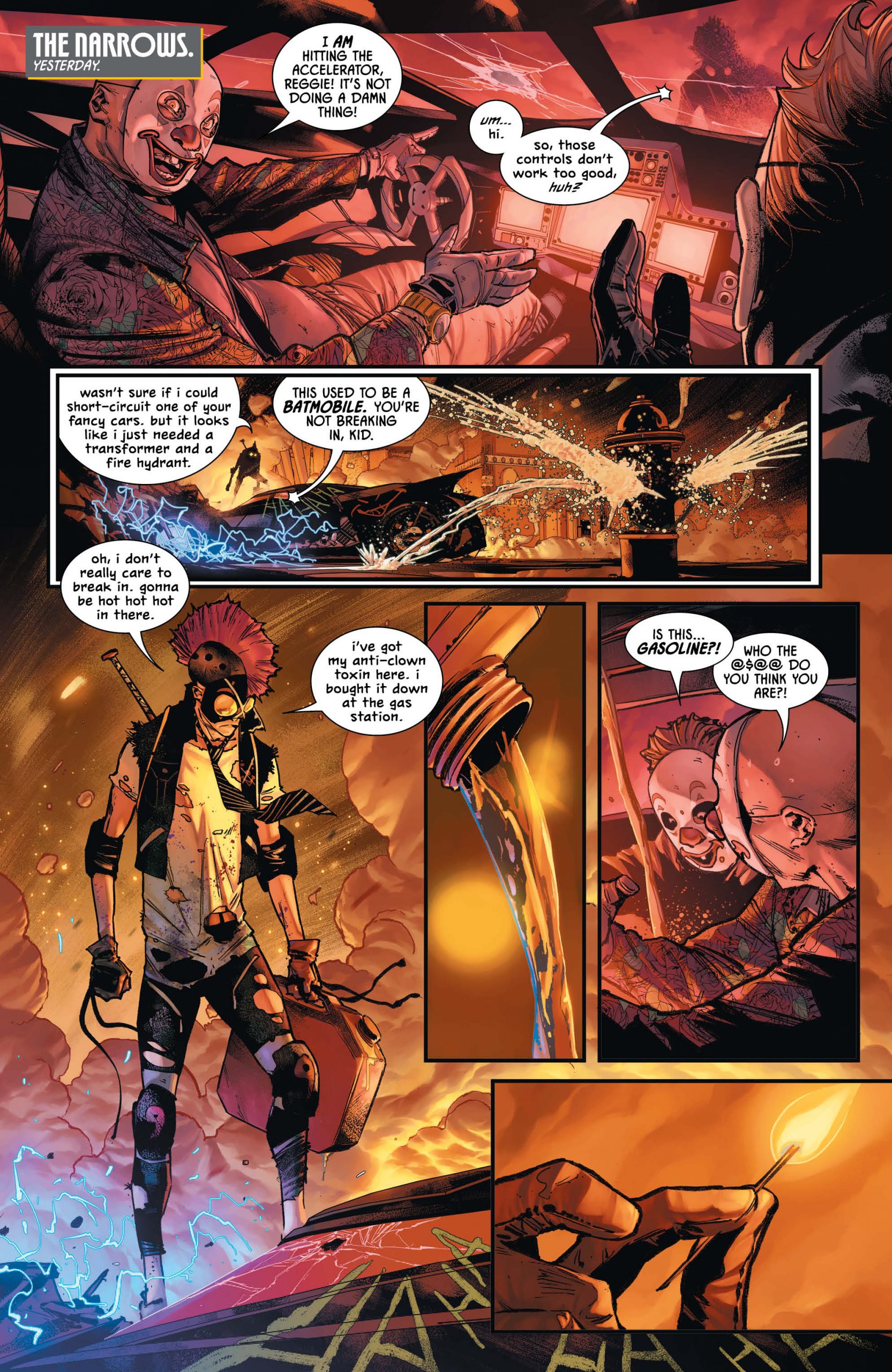 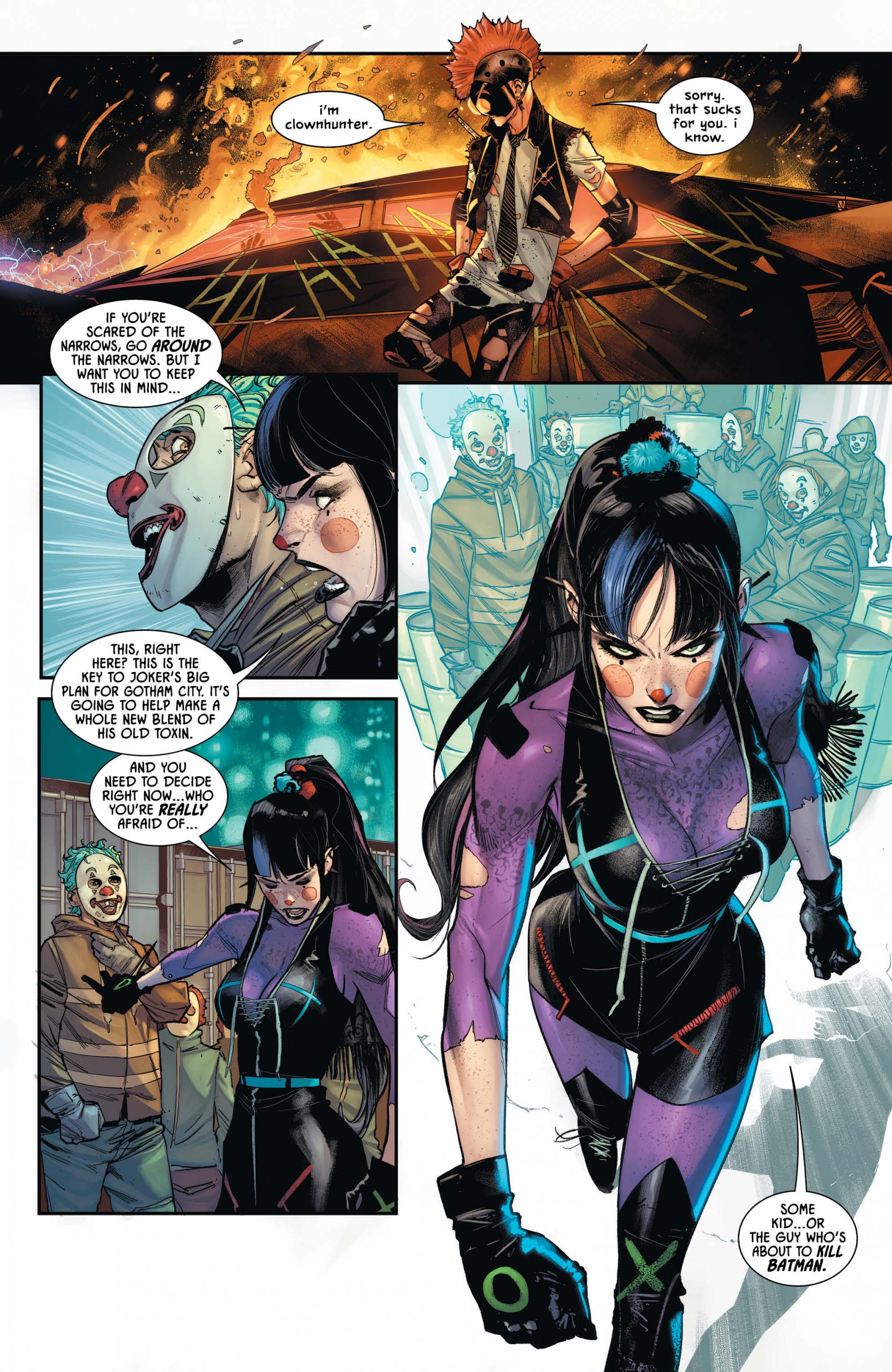 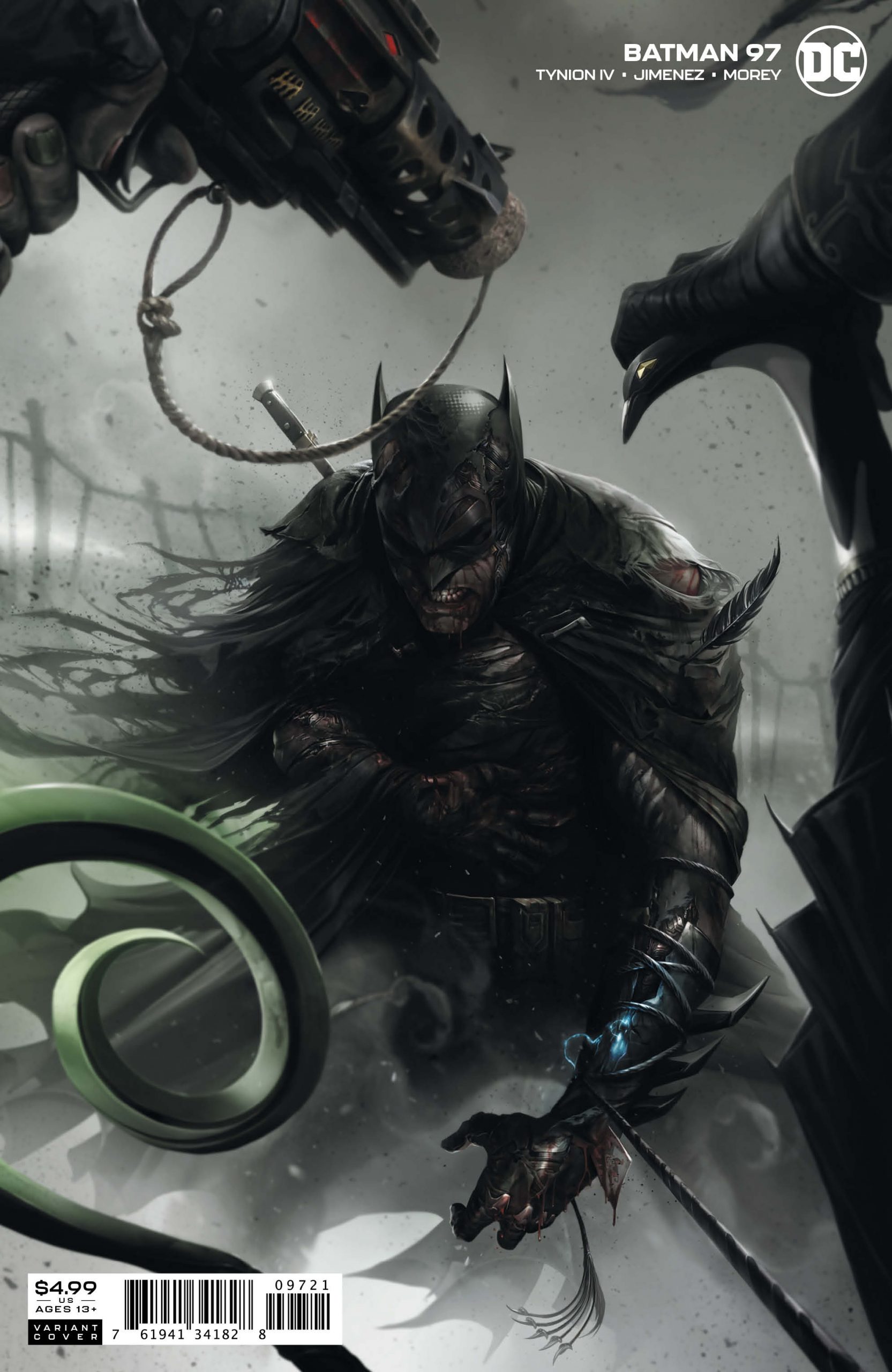 There are various other subplots that continue to chug along, with mixed results. Some are not too exciting, like the teases of Joker’s overall end goal. You know something big’s being planned, but it’s hard to get too excited about it when not a lot of details are revealed.

The Clownhunter subplot is bordering on silly. It’s difficult to believe that a teenager with a batarang strapped to a baseball bat is able to take out Joker henchmen armed with Wayne tech. Hopefully, there will be more character focus on him down the line.

On the other hand, Harley’s subplois currently the most interesting. One the reason is because it places Batman in a very emotionally vulnerable place, the other’s because it seems to show-off Tynion’s strength in introducing creative, new ideas. In fact, the amount of fun, new ideas is probably my favorite part of Tynion’s run so far.

Like, the previous issue, Batman #97 falls a little flat for me. There’s nothing out-right wrong with it, as it’s well-made on a technical level, but many scenes don’t rise beyond perfunctory. Despite that, it’s still an entertaining and fun reading experience.