The Batpod Was A Secret Since ‘Batman Begins’

In the trailers and marketing of The Dark Knight, one of the most exciting new additions to the franchise was Batman’s new ride, the Batpod. It was even more exciting to learn that the Batpod actually comes from the Batmobile. Nathan Crowley, the production designer on all three Christopher Nolan Batman films, revealed that the bike was actually being built in secret during Batman Begins.

That was actually a Warner Bros. executive in early garage times saying, “Hey, the bike could come out of the car.” It might have been on Batman Begins… It was like, “I think they’re right, we have to pull the bike out of the car.” Then it became this secrecy of we couldn’t say there’s a bike in it, and he has to sacrifice the Batmobile and the Phoenix has to arrive in the form of the bike.

So we sort of snuck up to Warner Bros. and nicked the tires off the Batmobile and brought them back to the garage, but we couldn’t tell anyone why we were doing it.

One of Christopher Nolan’s famous mantras, is that he takes his films one at a time. Instead of saving things for a sequel, his mindset is to not hold back and put everything into the film in front of him. While he does tease the Joker at the end of Batman Begins, his reasoning was that the story could continue from there.

It’s fun to learn that the Batpod was an idea they had in Begins, but for whatever reason decided it didn’t serve the story they were telling. Of course, in The Dark Knight, the Joker blows up the Batmobile with a bazooka, thus revealing the Batpod for the first time. As Crowley says, the Phoenix rose from the ashes of the Batmobile. 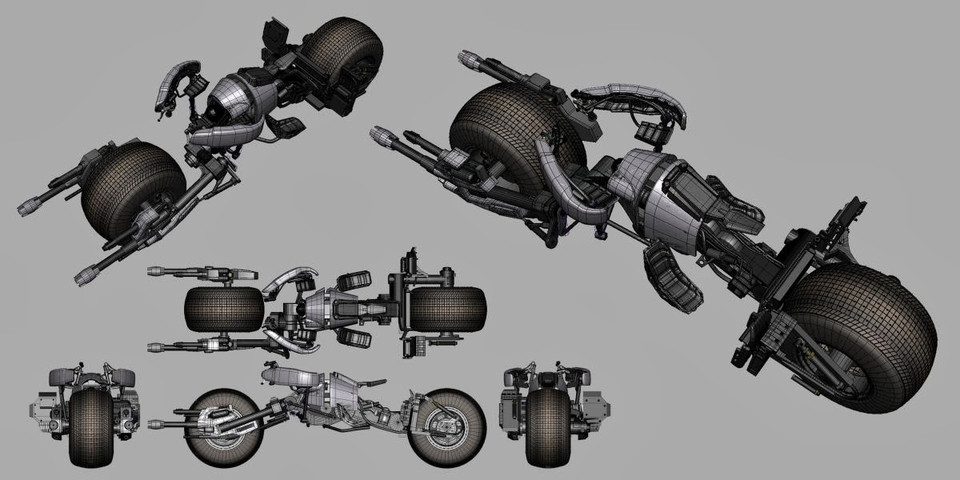 From Beginner to Dark Knight

While Batman Begins is a great film on its own, its sequel is considered the high point of the trilogy. Crowley talks about how The Dark Knight was the Batman film he always wanted to make.

For me, I don’t think this is true for Chris, The Dark Knight is actually the Batman I always wanted to make, but we had to step over Batman Begins to get to it. I am a desperate modernist. I like simplicity. On Batman Begins, I struggled with trying to make sure we didn’t destroy the comic book-ness of what Batman was and we tried to explain everything, there was the cave and Wayne Manor and how that worked and how you got down to it. There was lots of explanation in the design, and I’m grateful for Chris because he burned everything down [at the end of Batman Begins].

Personally, one of my favorite things about Begins is it explains almost everything that Bruce does to accomplish becoming Batman. We see him traveling the world and training. Find out where his gadgets come from and how he gets them. Learn how he established his cave and how it connects to Wayne Manor.

From Dark Knight to Legend

We’ve done these films in between the Batman films, like, The Prestige got slotted in there and it was very low budget. We sort of slowly discovered the beauty and the advantage of getting around locations and getting as many as possible. So by the time we get to The Dark Knight Rises, we’re going to like three different countries. And that really expands the scope of the film practically.

Of course, Batman is still rocking the Batpod by the time of Rises. But by the end of the film, Catwoman is the one riding it while Batman takes to the air with yet another new vehicle, the Bat.

Do you wish we got to see the Batpod in Batman Begins? Or do you think its reveal in The Dark Knight was worth the wait? Let us know!