It’s a crime that DC Universe remains so underrated. Despite the number of phenomenal series’ on the streaming platform, it’s only appealed to a niche audience. With HBO Max out, encompassing DC’s catalogue including Doom Patrol Season 2 simulcast between both platforms, the fate of DC Universe seems uncertain. With that being said, it’s been confirmed that Harley Quinn will air on HBO Max soon.

Season 2 of the Harley Quinn animated series wrapped last Friday, and I’m still reeling. The series manages to expertly mix biting, irreverent humor, with genuinely beautiful, emotional moments, peppered throughout. Despite these characters being so outlandish and ridiculous most times, they’re still incredibly relatable on an emotional level.

For a while now, the announcement of HBO Max has really left DC Universe’s fate very tentative. With the lukewarm reception to DC Universe, and HBO Max being far more versatile, some may believe that it makes little sense for DC Universe to continue. With Doom Patrol Season 2, it’s clear that WB is experimenting with DC fans, seeing if they can grab their attention towards HBOM. However, a quiet little piece of news floated into HBO Max subscribers’ mailbox the other day.

In a standard newsletter, WB confirmed that Harley Quinn will be premiering on HBO Max soon. The news came alongside the inclusion of two other animated series’, the key difference being that Harley Quinn does not have a premiere date. So, at least for the moment, HBOM subscribers can expect it… at some point.

Check the screencap below: 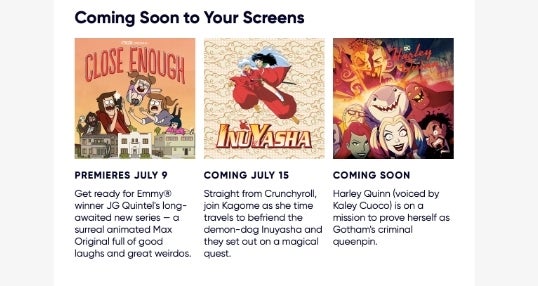 It begs the question of whether or not we’ll find any other DC Universe shows heading to HBOM. Harley Quinn was a winner from the first episode, and WB knew it, which is why the series has aired on various platforms since its inception. I’ve seen full episodes on YouTube, TBS, and Syfy. The series is accessible, and has the potential to gain even more widespread appeal. Though Doom Patrol wasn’t paraded around, it retains the same attributes of accessibility, despite its more bizarre aspects. Personally, I’d love for Swamp Thing to continue elsewhere. I really liked that series, and felt it didn’t really get a chance to grow.

In the end, however, it makes sense to have these series be available in more than one place. Good shows need to be seen, and if DC Universe doesn’t really have the viewership, you gotta bring it to the audience, since they’re clearly not seeking it.

Harley Quinn Season 1 and 2 are available to binge on DC Universe. Doom Patrol Season 2 is currently airing on there, and on HBO Max.