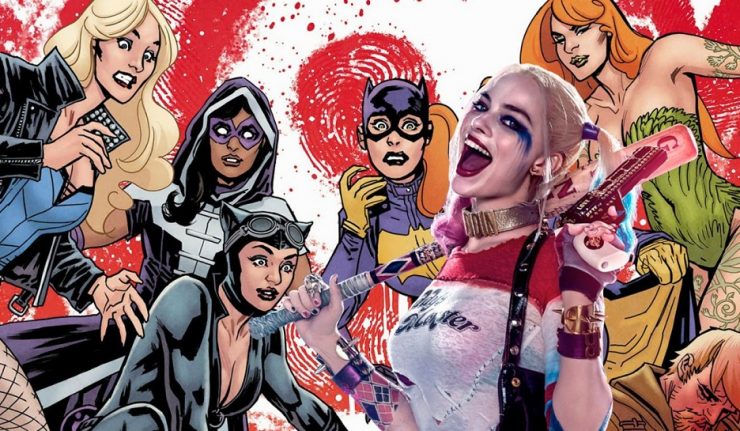 2020 is set to be Harley Quinn’s year. With the Birds of Prey film, heavily focused on her, a confirmed  appearance in The Suicide Squad, and her own animated series. Now DC are releasing a four part miniseries starting in February, also starring Harley Quinn and the Birds of Prey.

At a press conference celebrating the debut of the upcoming Harley Quinn animated series exclusively on DC Universe, DC announced the return of one of their most celebrated comic book talent teams to the character they made a fan favorite. This February, writer/artist Amanda Conner and co-writer Jimmy Palmiotti reunite with the Clown Princess of Crime in Harley Quinn and The Birds of Prey.
Scheduled to launch in February, this four-issue miniseries is a sequel to Conner and Palmiotti’s bestselling fan-favorite run that started in 2013, including the cast of crazy characters from Harley’s Coney Island crew (Harley Quinn, Harley Quinn and Her Gang of Harleys). With Harley finally done with The Joker, she’s moving forward with her life (as only she can) until she’s beset by a rogue’s gallery of Gotham City’s worst villains, the target of a $10,000,000 bounty placed on her head by the Clown Prince of Crime. It will take the help of Black Canary, Cassandra Cain (a.k.a. Batgirl), Renee Montoya, and the Huntress to help Harley and get to the bottom of why The Joker has turned Gotham’s worst loose on her.

“Jimmy and I are so looking forward to this project,” said Conner. “I’m excited to be co-writing it, but it’s been some time since I’ve been able to draw interiors, so I’m doubly excited. Harley is a blast to write and draw; throw the Birds of Prey into the mix and it’s even more fun. And since this will be a mature readers title, we’ll do our best to get away with as many shenanigans as possible!”

Since taking on Harley Quinn in 2013 with DC’s New 52, Conner and Palmiotti have brought a new sense of style to the character while retaining the same sass, swagger, and attitude (and an even bigger hammer) that brought in a new legion of comic book fans and expanded her appeal to those who knew her only from her origins as The Joker’s girlfriend in Batman: The Animated Series.

“Amanda and I are super excited to be creating this new series for DC,” said Palmiotti. “We’ve been waiting for the right opportunity to let loose on a project with a no-holds-barred Harley story where we revisit Harley’s supporting cast and take her on an adventure back to Gotham. Teaming up with the Birds of Prey, Harley will turn all their worlds upside down—exactly how she likes it. Working with Amanda on the art and storytelling has been a blast so far and this book will be like nothing we have ever done before.“
“The combination of Amanda, Jimmy, and Harley Quinn has always resulted in great stories for Harley fans and this series will be no exception,” added DC SVP and Editor-in-Chief Bob Harras. “Their interpretation of Harley has made her a favorite of fans everywhere. Much like Batman: Last Knight on Earth or Batman/Catwoman, this miniseries is another example of great creative teams who are adding to their storytelling legacy with a memorable sequel.”
Harley Quinn and The Birds of Prey is a 32-page, four-issue miniseries debuting in comic book stores and participating online retailers February 2020 (exact date TBD) and shipping every other month thereafter; each issue will sell for $5.99. Each issue will also carry DC’s “Black Label” descriptor, identifying the content of this book as appropriate for readers ages 17 and older.

Who else is highly excited for the year of Harley Quinn year? I know I am!