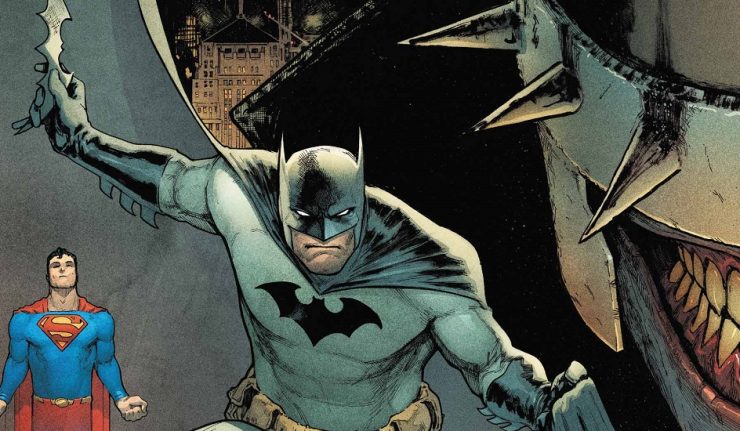 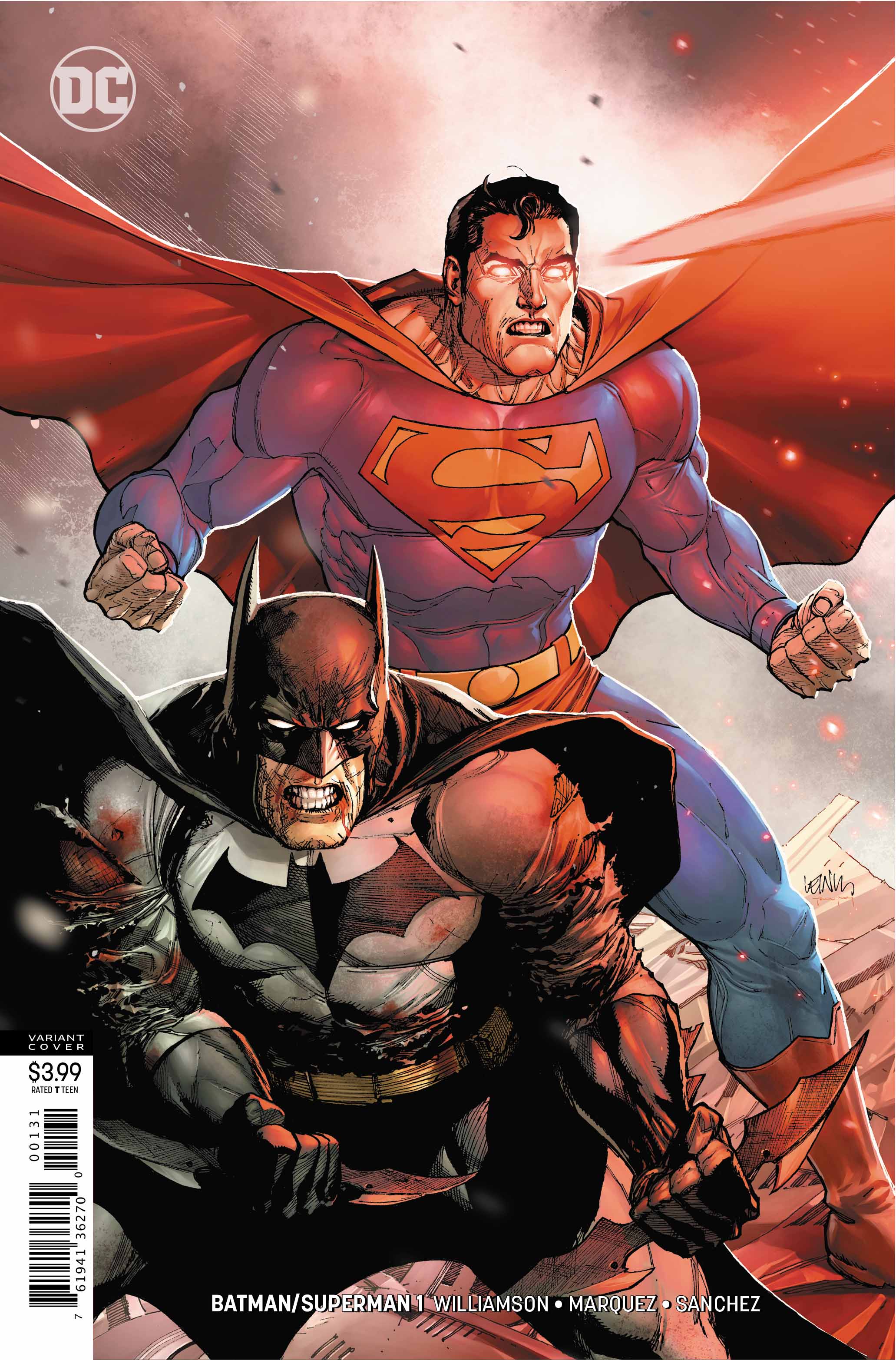 Everyone is a suspect in this week’s Batman/Superman #1, as the Dark Knight and Man of Steel investigate the case of a missing child.

Following the events of Dark Nights: Metal and The Batman Who Laughs, the issue opens with a meeting between Superman, Batman, and Commissioner Gordon. Gordon reports that a laughing Superman has abducted a thirteen-year-old boy named Danny Mills. The World’s Finest then scurry off to find the boy, only to stumble upon The Batman Who Laughs’ (TBWL) Batcave. There the two heroes uncover TBWL’s master plan to corrupt any number of earth’s heroes with his Joker toxin. Suddenly, one of TBWL’s Robins mauls Batman. The issue ends with a major reveal – a former Justice League member has been transformed by TBWL’s toxin.

Writer Joshua Williamson pens a strong, character-driven script that follows a similar motif used in previous versions of this title. Williamson uses Batman and Superman as foils for each other, highlighting their differences by narrating their inner-monologues. While Batman is the proverbial cynic, who constantly dwells on the darker parts of humanity, Superman is ever the optimist and a perpetual beacon of hope. Watching these two heroes work together is fantastic, as Williamson’s phenomenal grasp of these two icons is perpetually on display. 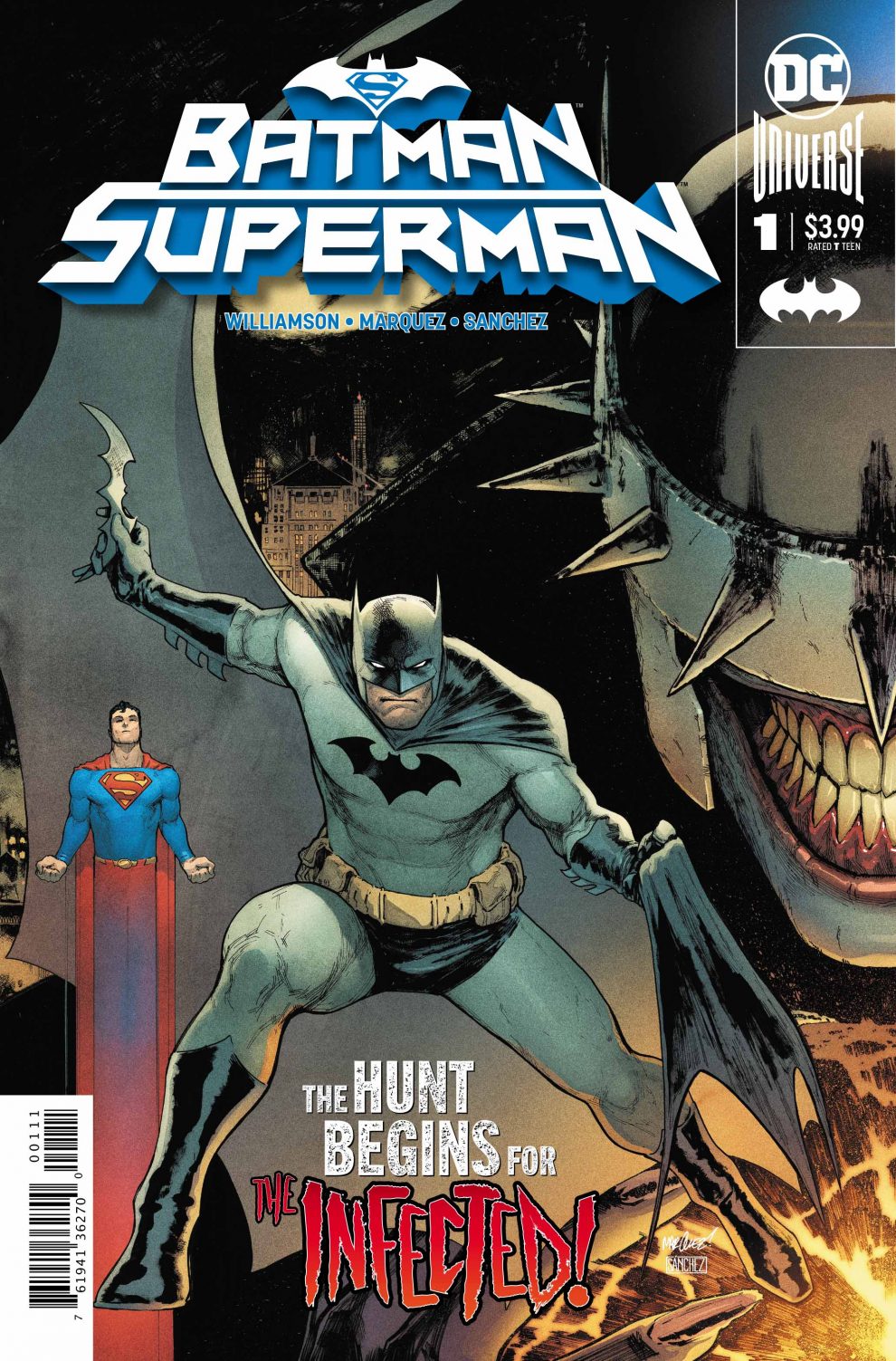 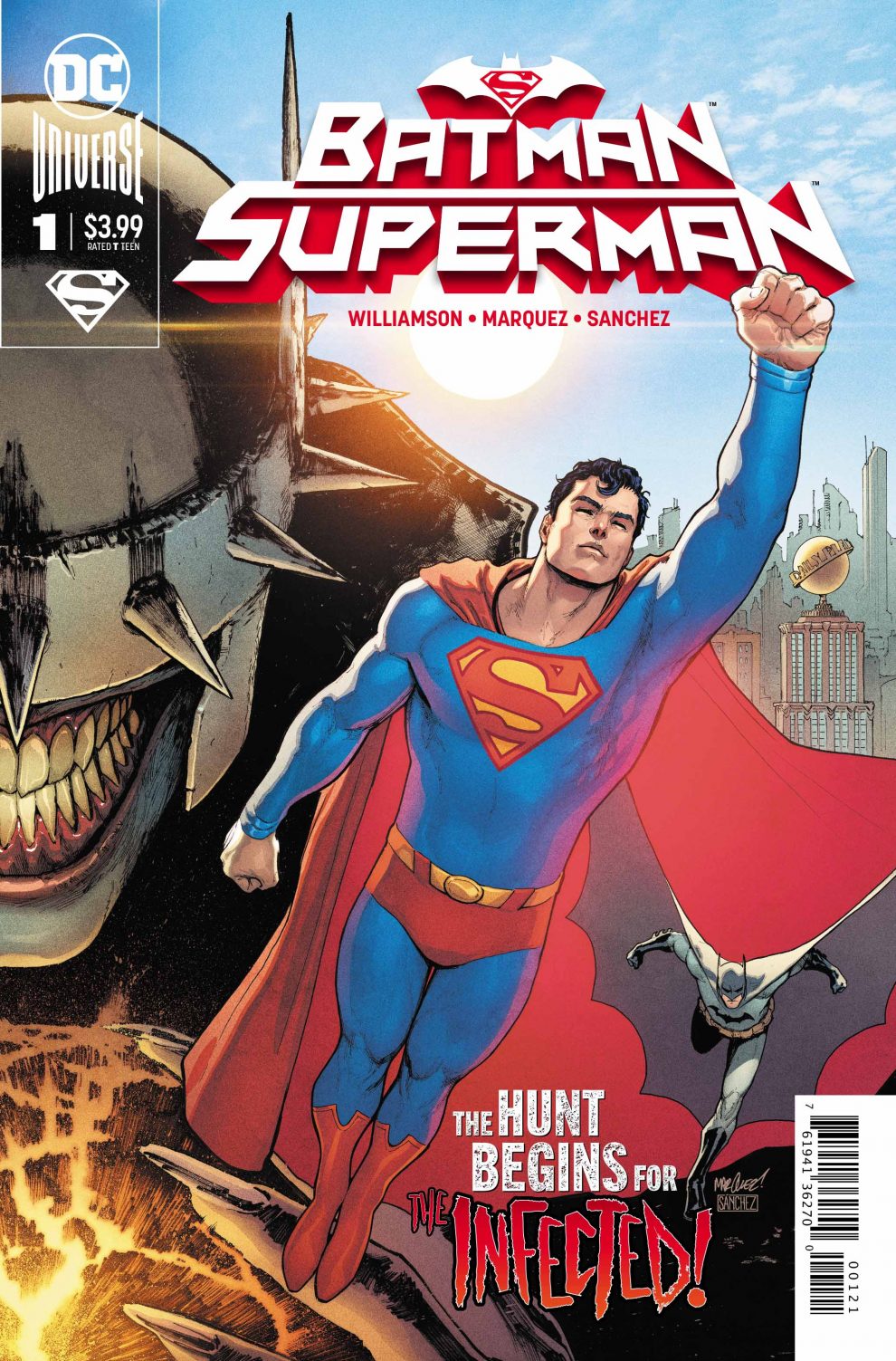 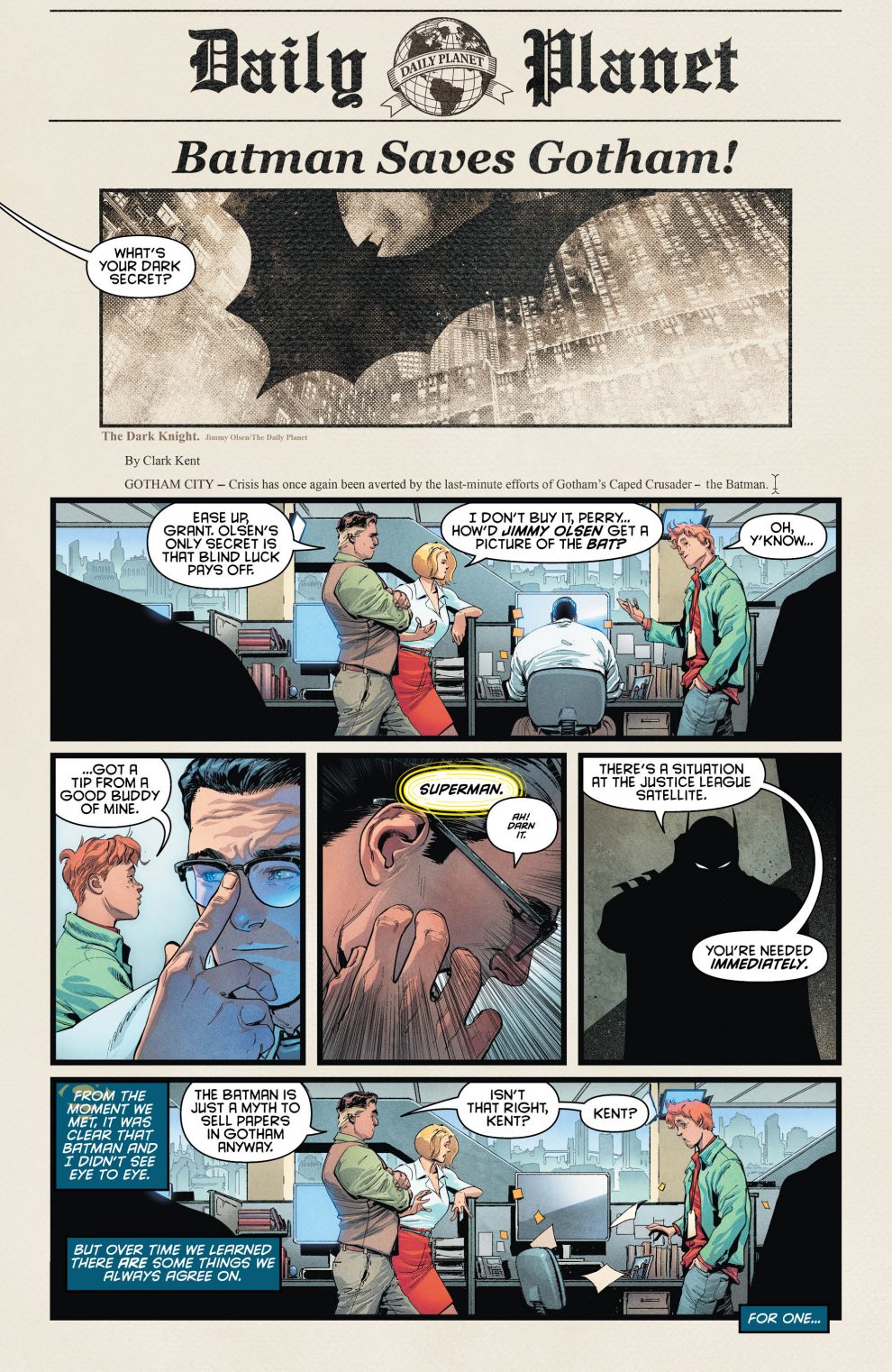 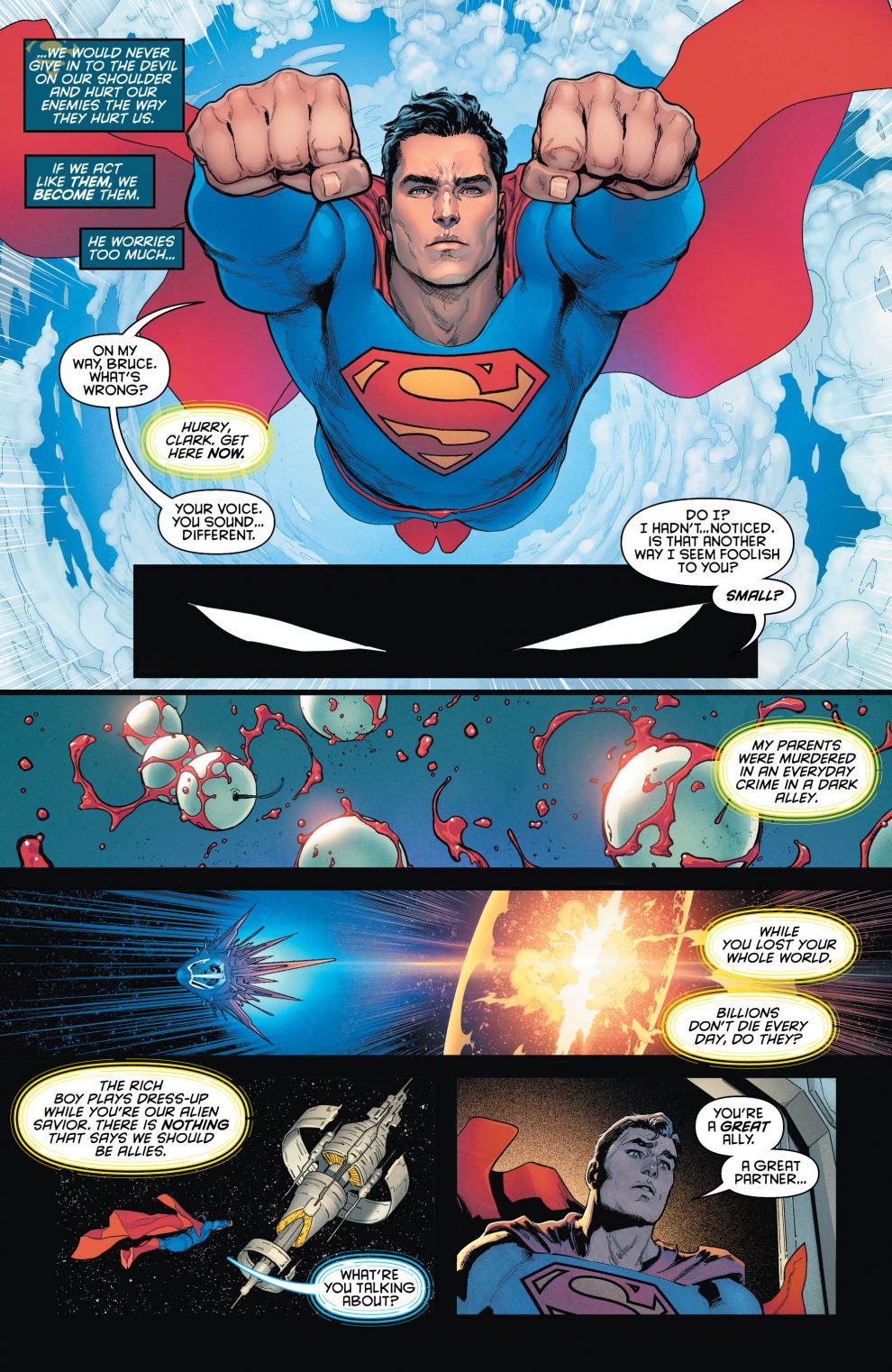 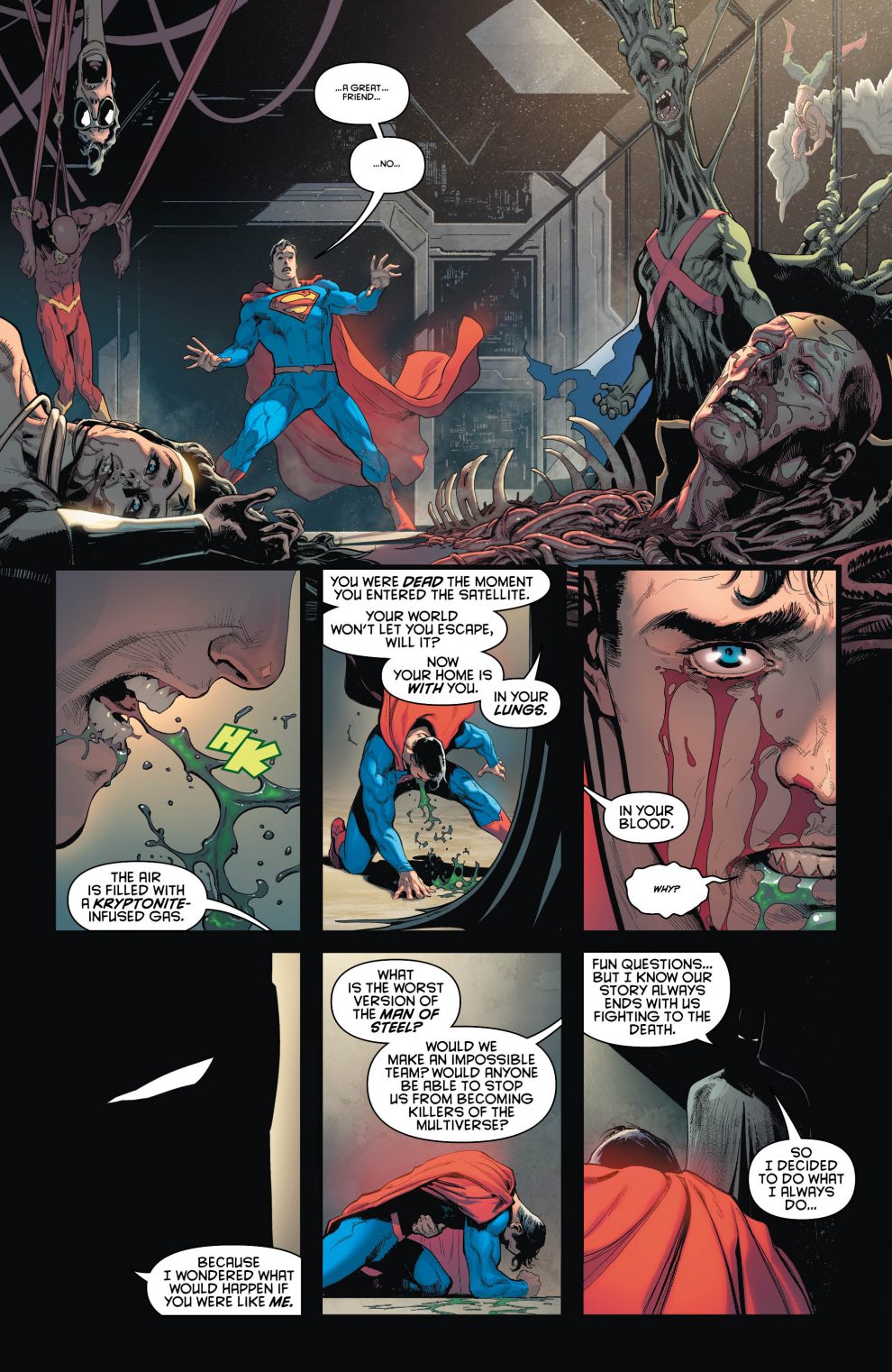 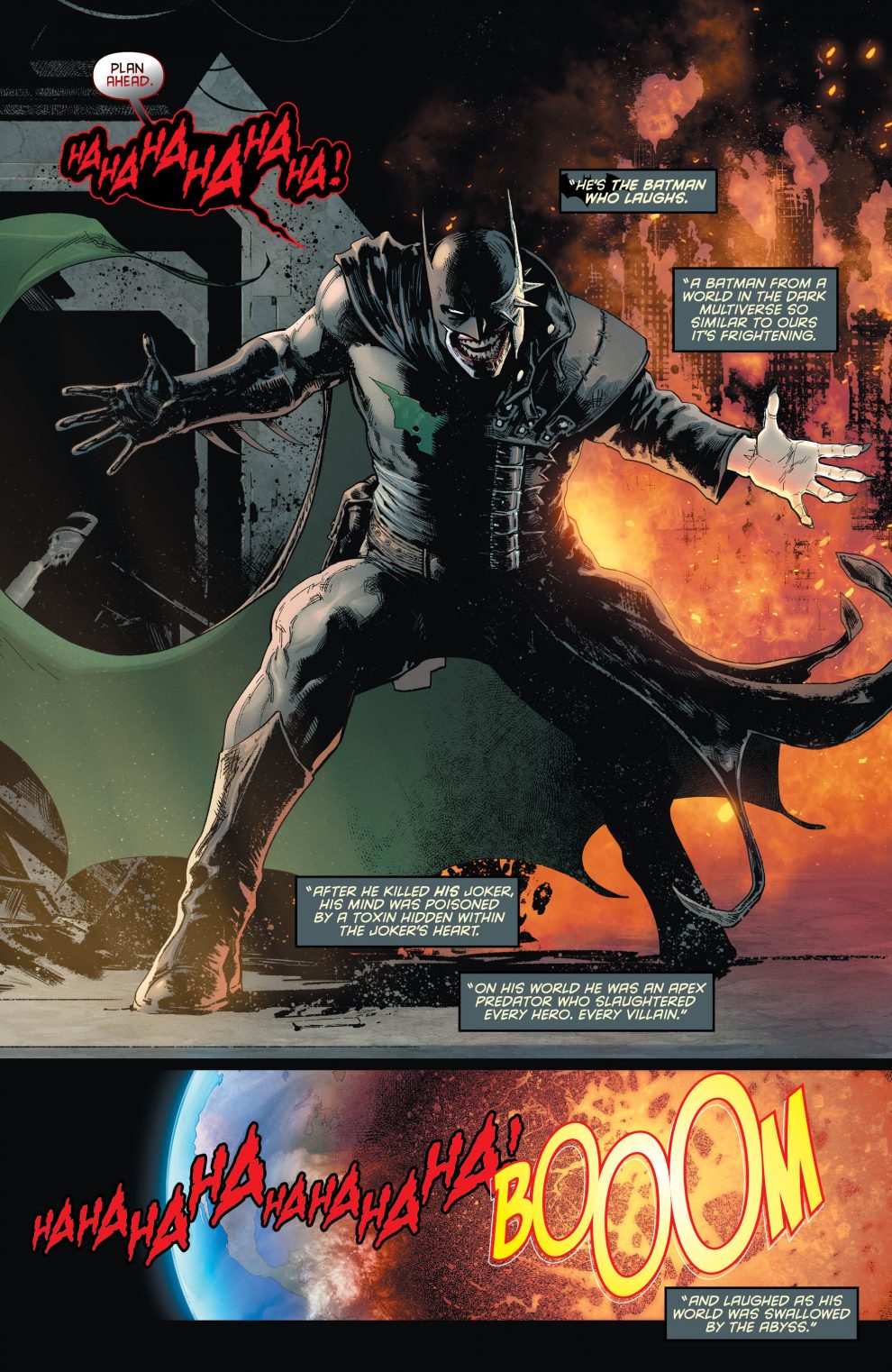 Batman/Superman is David Marquez’s debut work for DC comics, and he brings his A-Game. Marquez, who is famous for his tenure on Ultimate Spiderman and All-New X-Men, is another one of DC’s recent A-List “poach-hires” from Marvel, and DC could not have picked a better title for him. Marquez’s work in Batman/Superman #1 is clean and smooth, as characters are rendered in splendid detail. Marquez’s work is highlighted by Alejandro Sanchez’s excellent coloring, which adds a polished sheen to the title’s art. In short, this comic is delightful eye-candy.

Batman/Superman #1 is a terrific first issue – one of DC’s strongest debuts of recent times. Williamson has a distinct vision and direction for his story, while Marquez’s work is a beautiful compliment in tone and tenor. Although this issue is fantastic in many ways, it does suffer from continuity dependance, as new readers will undoubtedly find this issue a challenge, if they haven’t read Dark Nights: Metal or The Batman Who Laughs. Nevertheless, for those who are totally caught up with these storylines, this title is an exceptional read.

Final Verdict: This comic is well worth your time, as long as you’ve done your homework.