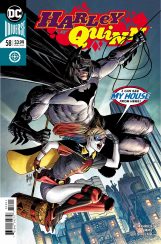 On The Backs Of Dinosaurs

It’s really hard to say which of this series my favorite is, when they all have such beautiful moments. This issue does not disappoint in that regard. I have seen other reviews coming down pretty hard against the Harley verse. so I’ve taken a step back, to see if maybe I am just biased and wearing rose tinted glasses.

After coming back from that quick mental check and rereading this issue, I have come to the conclusion that I have no bias for this series. It has had more great stories coming from this team then I have read in a while and, on top of that, they keep stepping it up for Harls and her crew. Look at the Variant cover art by Derrick Chew for goodness sake! This issue #58 is a direct follow up to a small story arc that began back in #57.

Let’s dive in shall we?

The Glory Of Cosplay

When we last left Harley she was being taken in by Batman for a murder she protested hard against. With all the evidence piling against her, though it was hard to see through things to see whether Harley had, in fact, broken her promise and gone back to the life of crime. With witty banter and plenty of action scenes, this newly formed dynamic duo forge a pact to discover the truth by dawn, or Harley would be seeing the GCPD in a way she had sworn not to again. The big question is, who is trying to frame her? 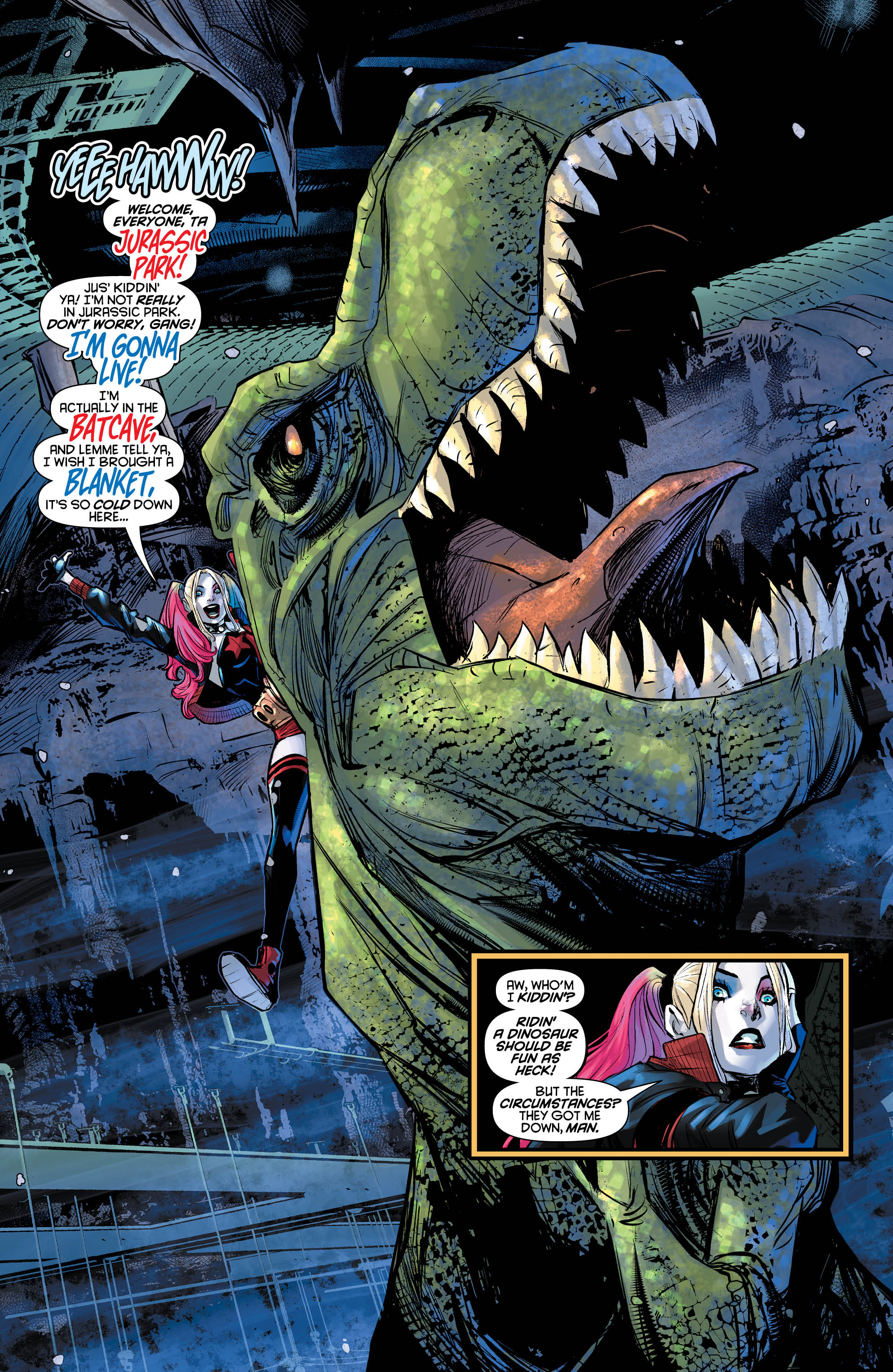 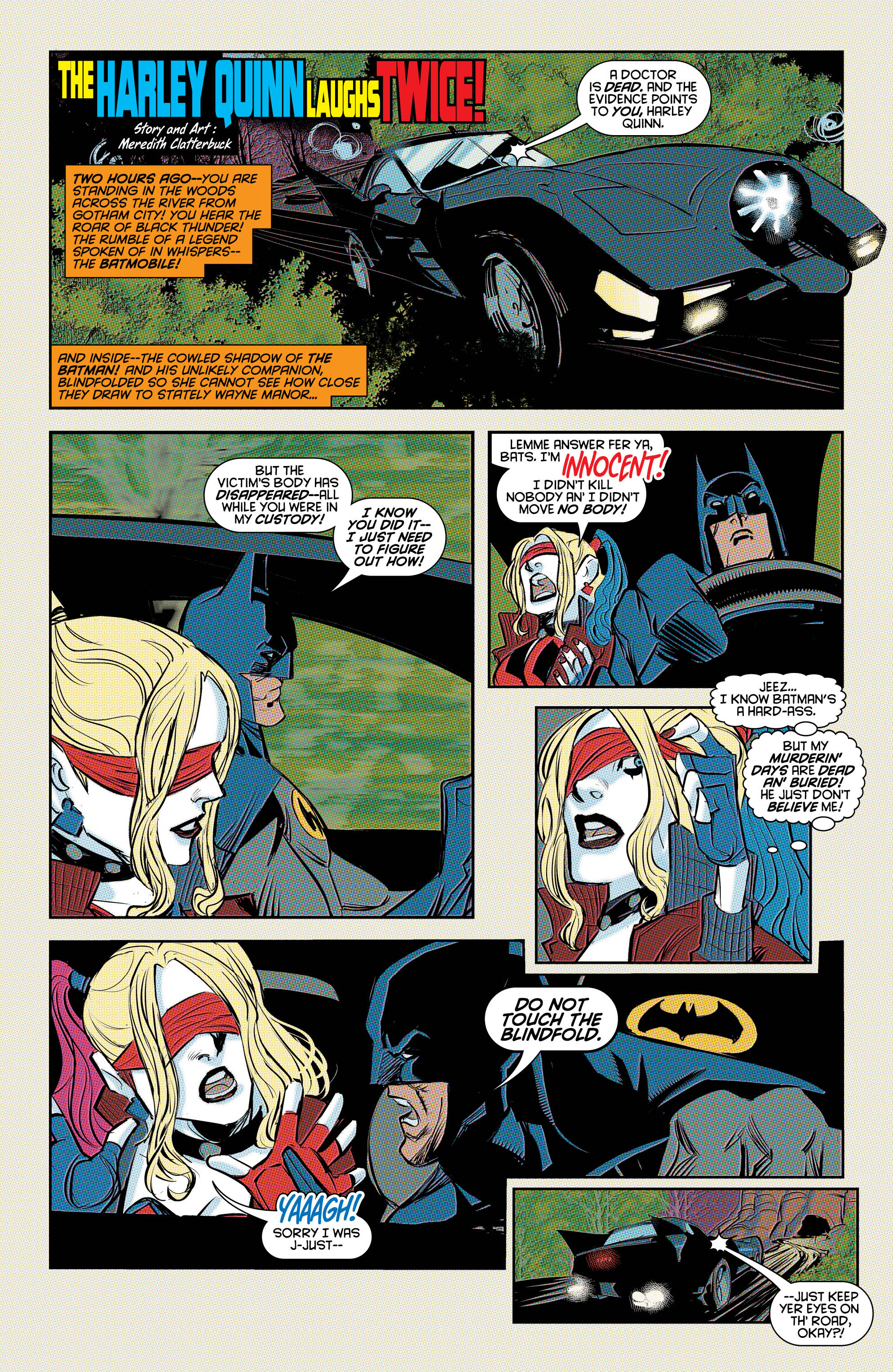 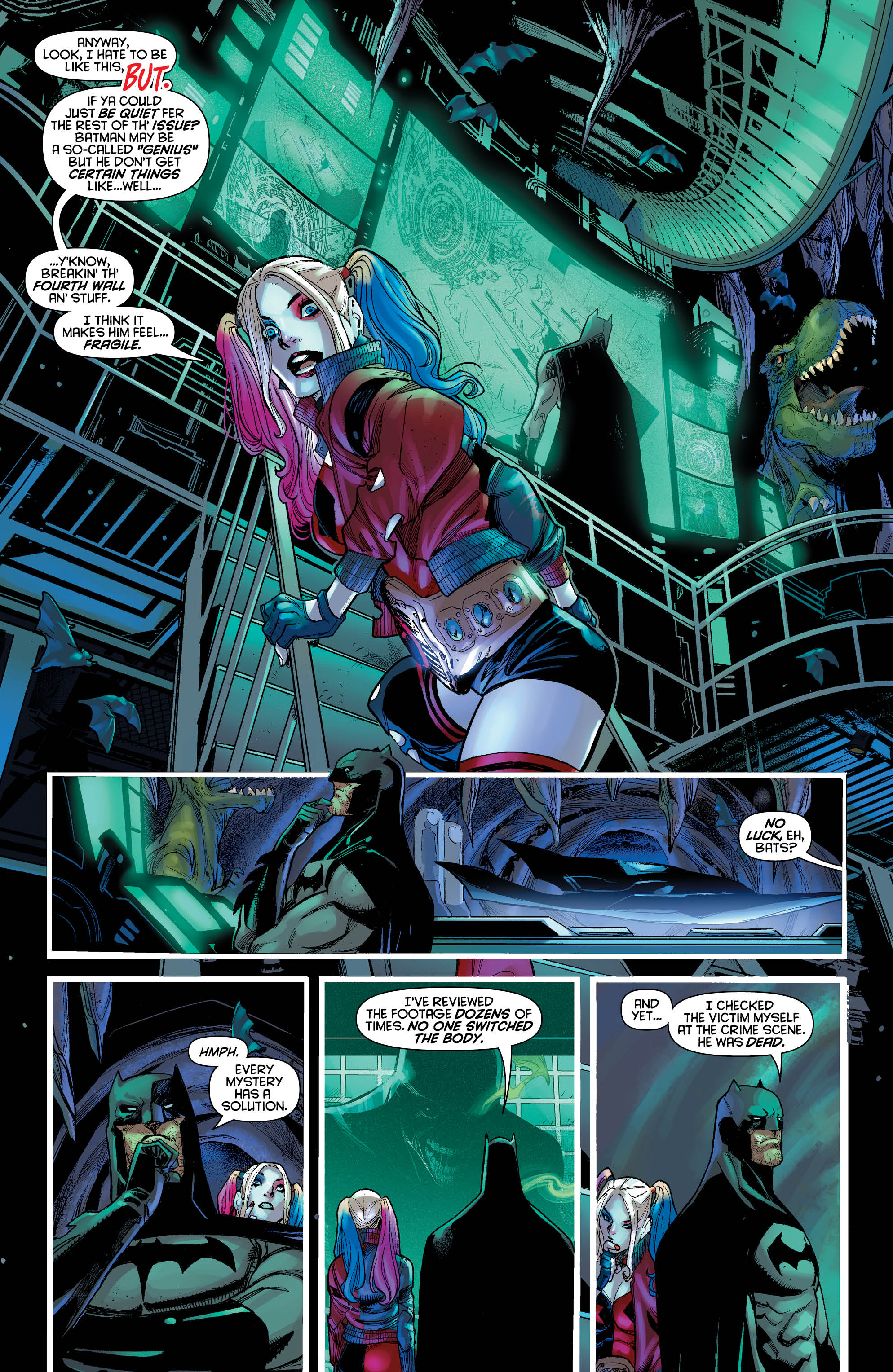 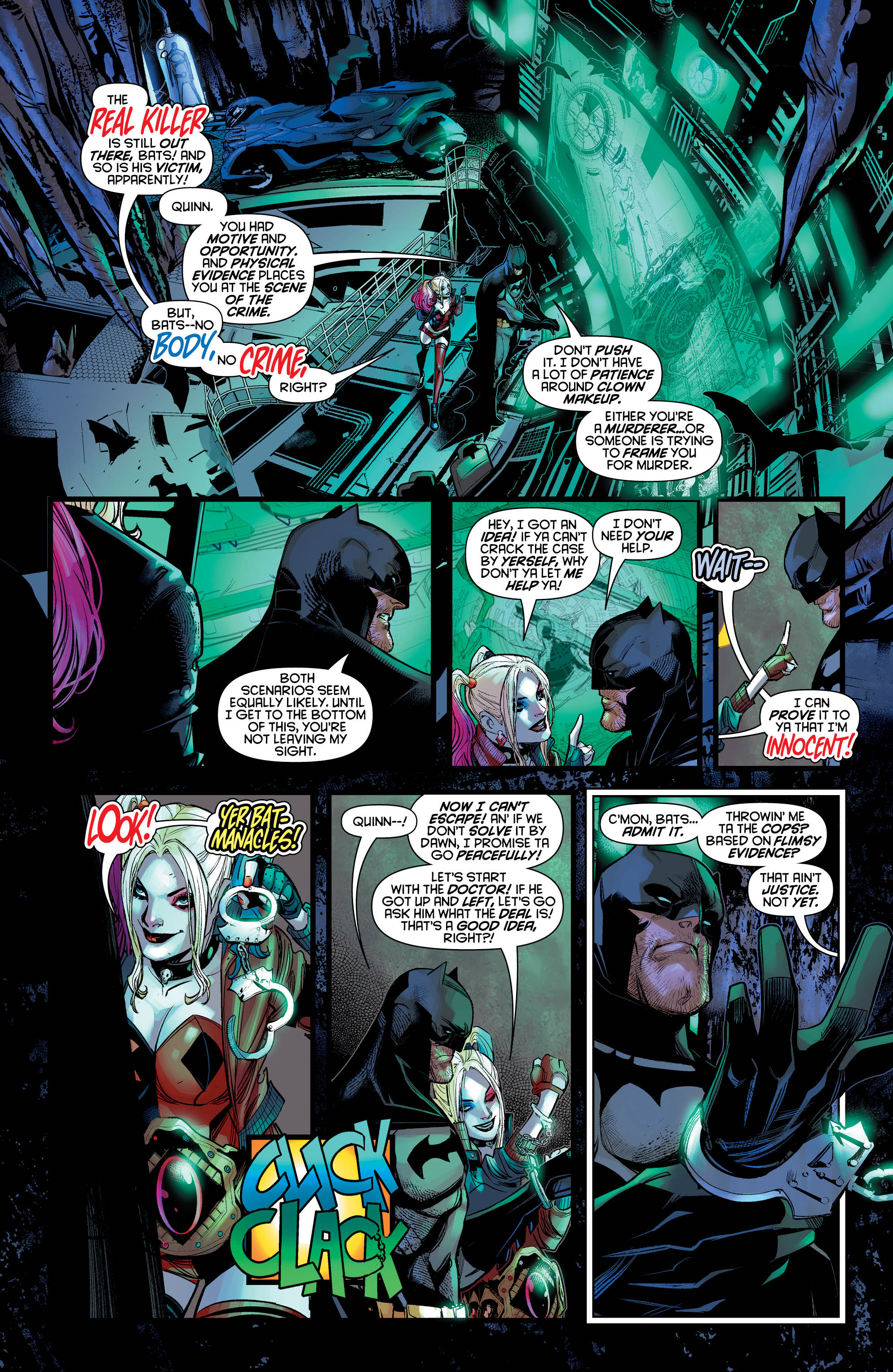 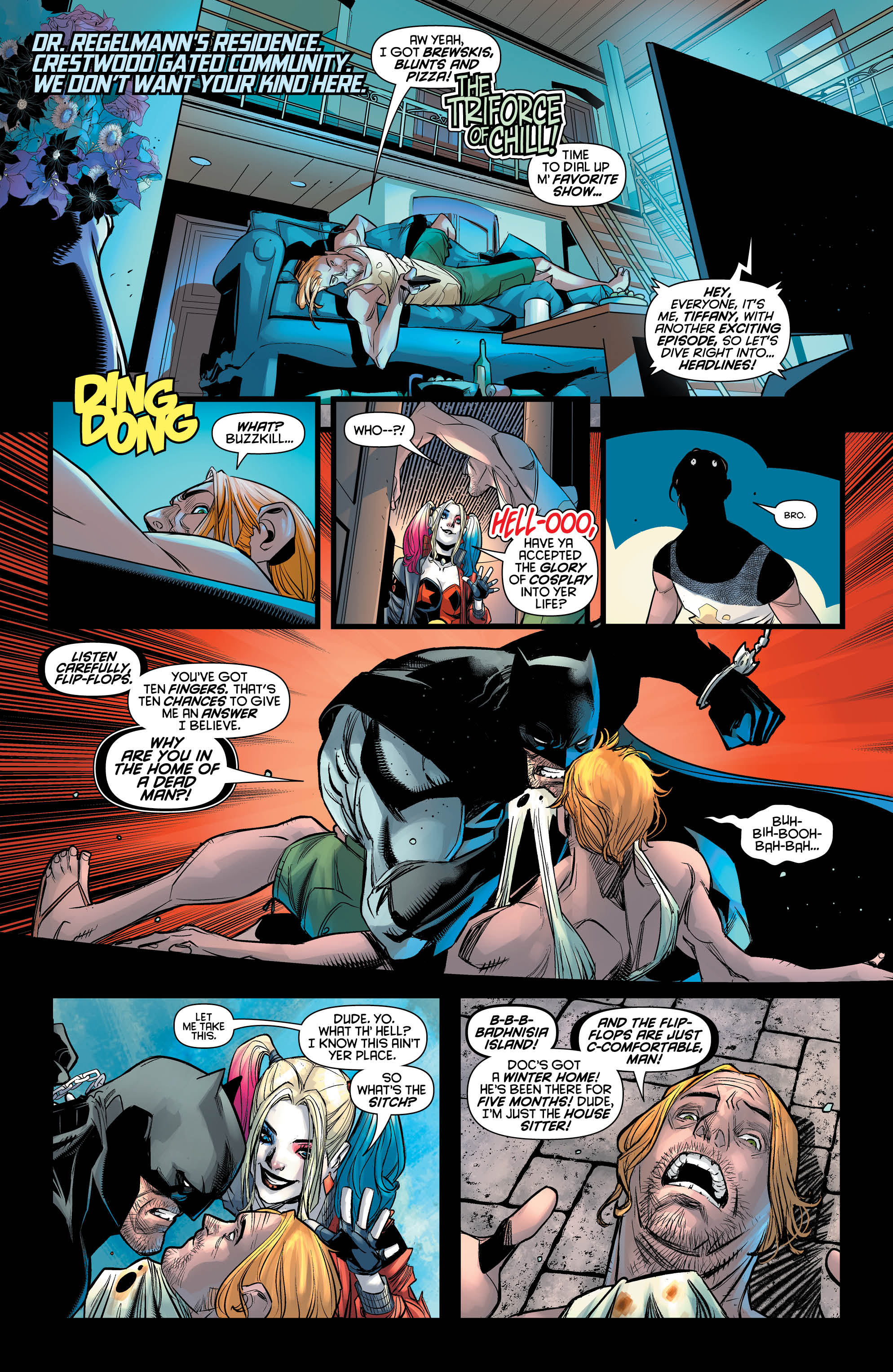 No Body, No Crime. Right?

This issue deals a lot with issues we have seen Harley facing throughout the series, and one of my favorite moments is a brief scene with her and Bats. She tells him that his opinion matters to her; she is so afraid that, because she was a bad person once, that she’ll never have redemption and will always be seen as a villain. It’s moments like these that really do make this comic that much more accessible, because they delve into emotions that extend beyond the comic world in a really good way. Harley has come a long way in her run as a character and what this team is doing expands upon that in all the best ways.

Humphries, Timms, Sinclair and Sharpe do such amazing work together and with the love of the cover artists, whether it is Amanda Conner, Frank Cho, or this amazingly refreshing, joy to behold Variant piece by Derrick Chew. The team absolutely takes it up a step and makes the story not only fun to read, but you want to keep reading it. Each issue holds something new with the overall arc, showing the trials Harley is going through. I personally want so much more, wishing it were more like Netflix and all available at once… but I will be patient. Maybe.

This issue receives full marks from me. The art is astounding, the writing’s incredible and tugs at the heart, as you watch Harley becoming who she genuinely wants to be. Colors are brilliant and bring everything together beautifully. Sharpe makes lettering look like a breeze and with the range shown here, it matches Harley showing her personality and fourth wall breaking. Awesome sauce! Kudos guys, this was a pleasure, truly.

Readers, what are your thoughts so far on the arc? What do you think may be awaiting Harley in the trials? Let us know in the comments.

Review: Adventures of the Super Sons #7