Review: Injustice Vs. Masters Of The Universe #6

“The King Of Castle Greyskull” 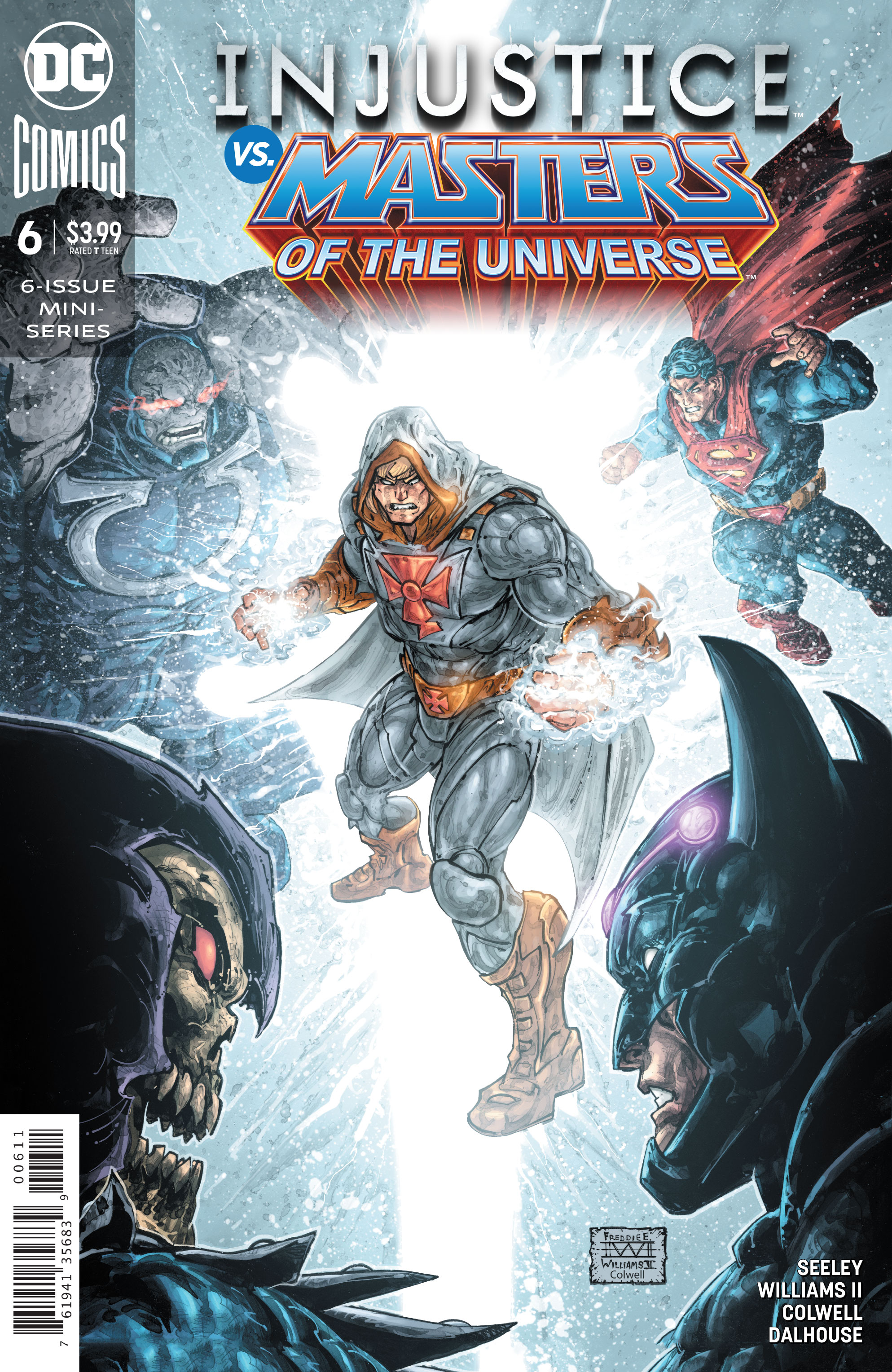 I knew this day was coming and here it is, dear readers. It’s the last issue of Injustice Vs. Masters Of The Universe. With the winds and dips, weaving and bobbing of the story, it’s surely kept us on our feet. Villains who have been cast by circumstance into the role of Hero and those who always have been are facing their deepest dark sides, as the mask of Villain slides on all too easily.

I’m Gonna Let You Have This One, Blondie

We’re back into the thick of things with the writing and art team spinning us this final instalment. Darkseid and Skeletor are no longer the main concern, but that doesn’t mean that Earth and Eternia are out of the woods just yet. Prince Adam is powerless and, while Clark is back, it isn’t quite clear which side he’s on until it is too late.

Meanwhile, back on He-Man’s homeworld everyone is struggling against the armies of Darkseid and Skeletor. The battle for power still wages, even with the leaders dead. Some of the best parts of this is the dialogue between characters; Harley and Supergirl have great banter during the fight, which leads to a few chuckles and some great action. 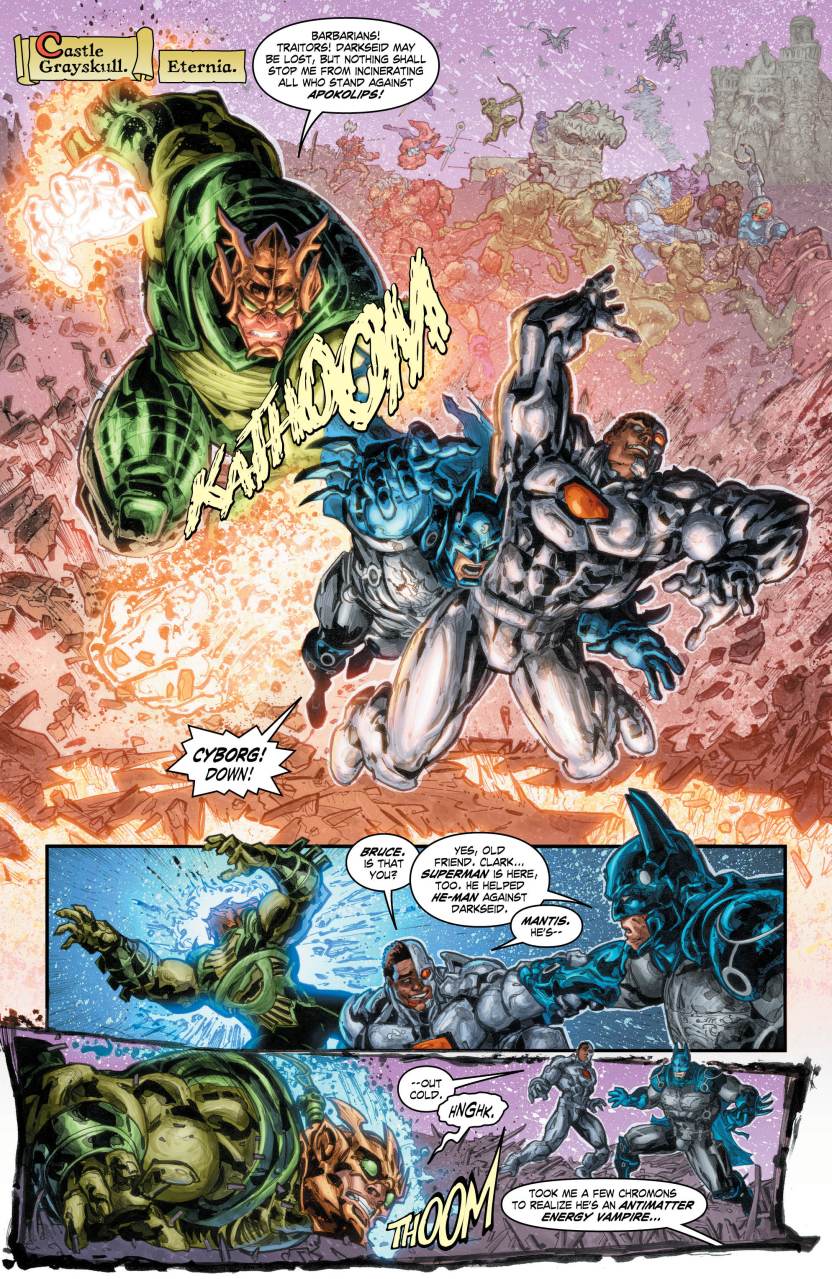 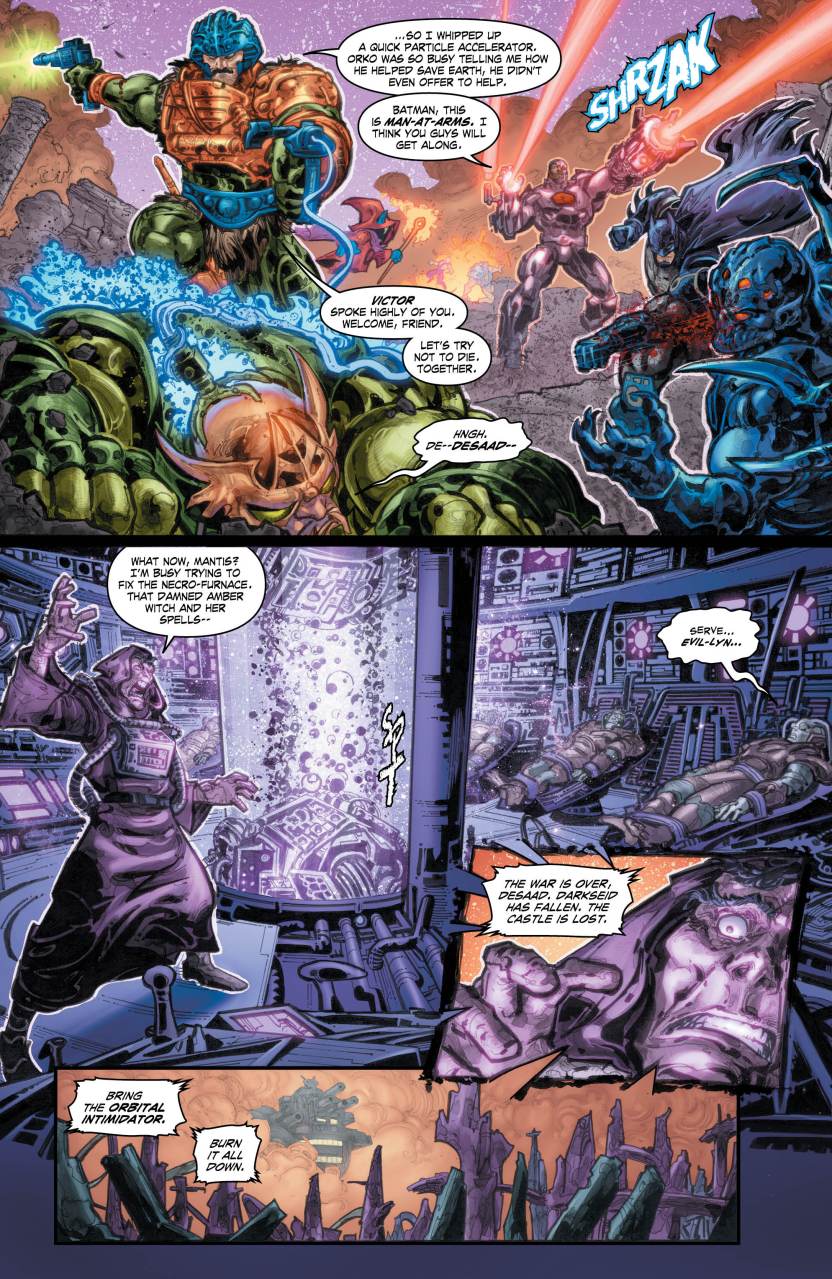 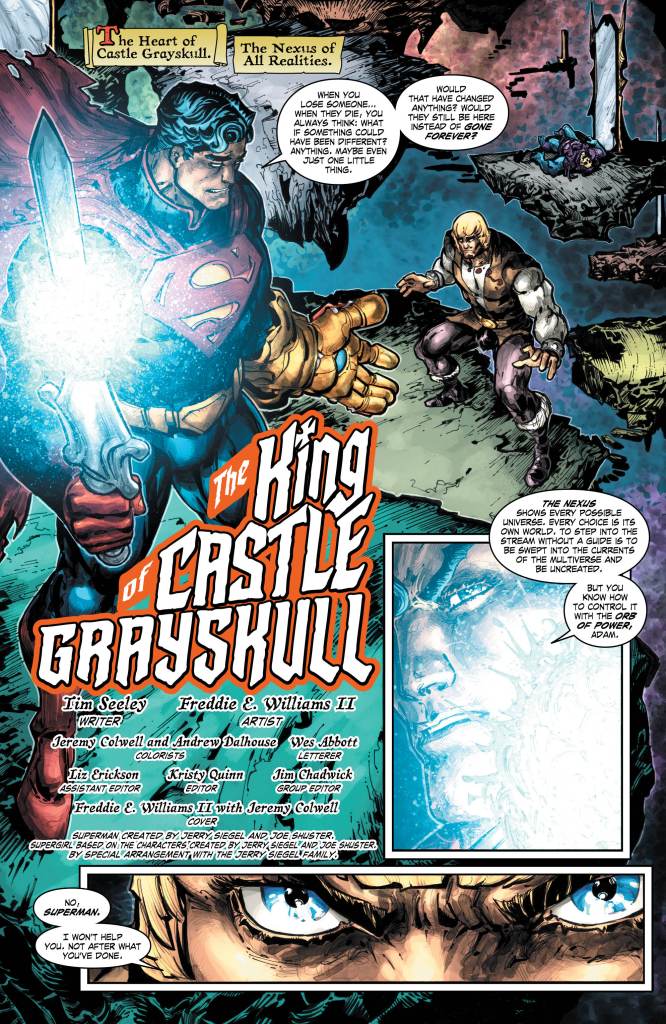 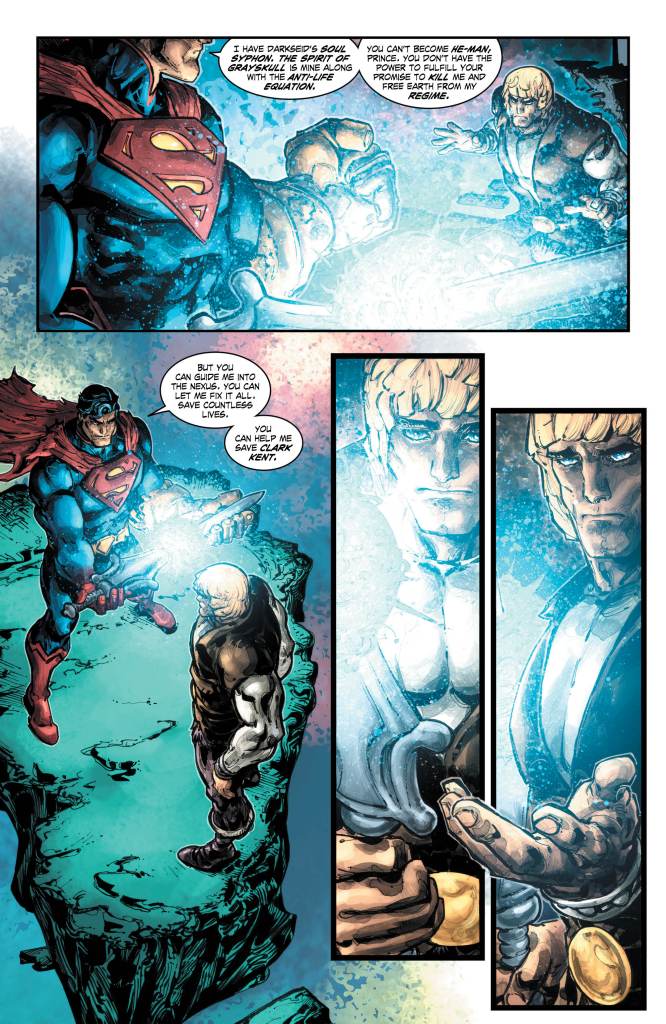 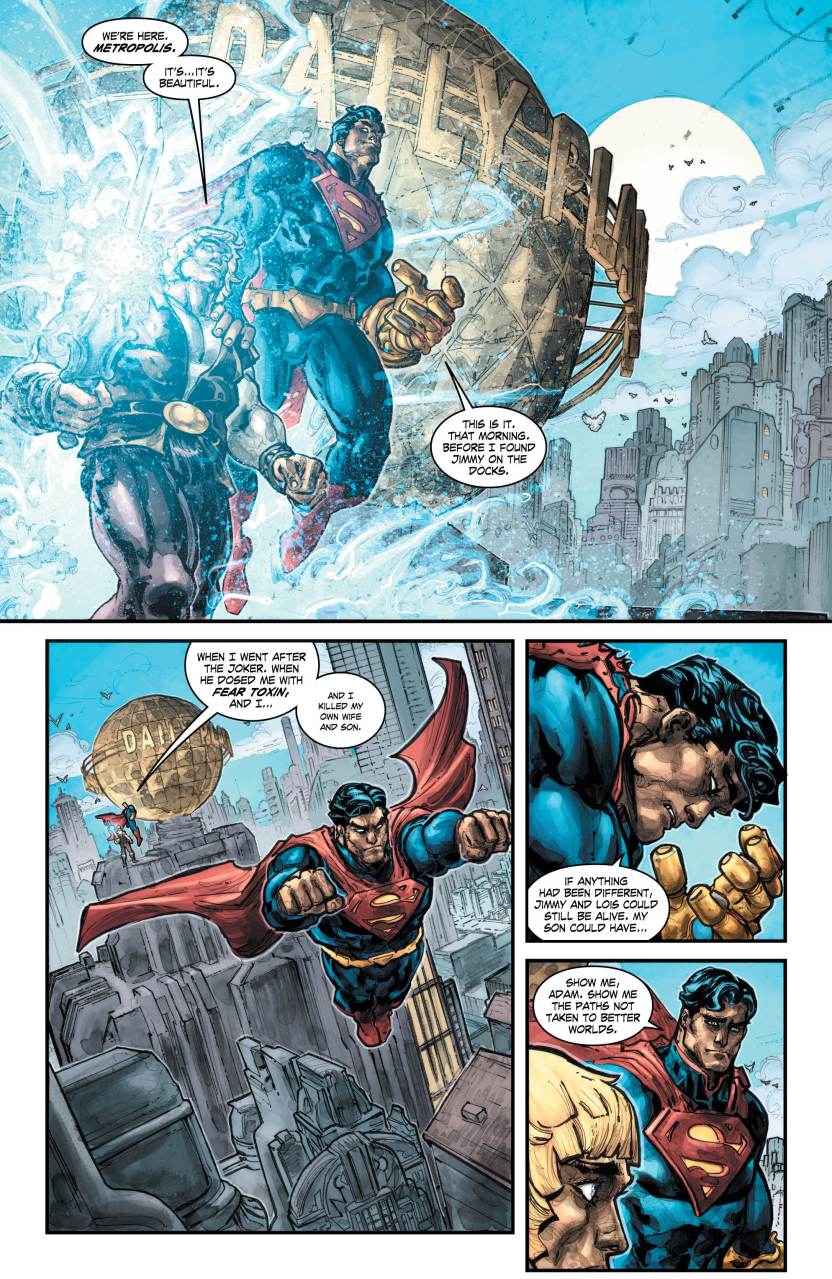 The story really does a great job of giving us some great battle scenes, but one in particular struck me I’m sure that other fans will love it too. We get a great sequence between Prince Adam and The Wizard Shazam, one that gives us the be all/end all potential answer to a question fans have fantasised about for years.

DC fans have of course always pit Bats vs Supes throughout the ages, but another instance that saw light in one of my top five books – Kingdom Come – raised the question of Superman vs Shazam! The original Captain Marvel is a favorite of mine and honestly I have a bias anytime this argument is brought up. The story that he is pure of heart and endowed with the power of immortal elders to be a champion for the world is enough for this fan.

With Shazam being the proverbial boy scout, he is for certain on a different level. In this story arc however he has already perished at Superman’s hands. With the cover we get to see what happens when the Prince of Eternia gets a taste of the power the Wizard Shazam has in store. Read this series, it’s worth it… I promise.

The writing and art team have stepped up their game to close the series right. They did full justice to the Injustice game as well as for MOTU as well.  The art is stunning and Tim Seeley with Freddie E. Williams II bring a lot to the table this issue. The team of Colorists Jeremy Colwell and Andrew Dalhouse bring the artwork to life beautifully. The faces in particular are amazingly well done.

The full story arc really did mirror the game very well, when it came to the Injustice characters. Throwing The Masters of the Universe into the story made me pause initially, but it works very well. The creative team was able to make the storyline not only work, but left the ending open enough to leave us us with the possibility of future stories to be told, in all manner of universes. This series was a joy and while I am sad to see it end, I enjoyed every minute.