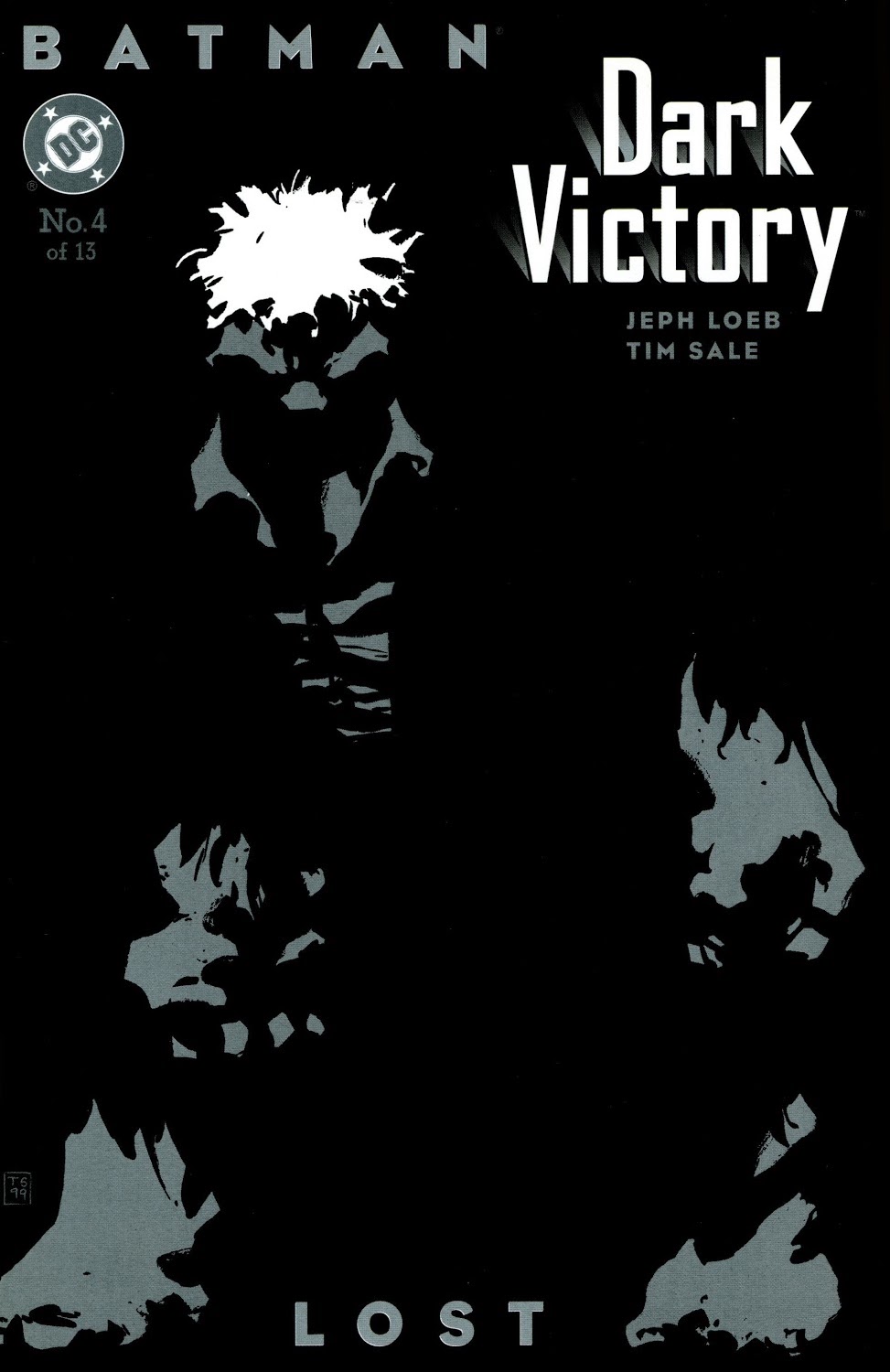 Batman turns to Solomon Grundy to try to find Two-Face as the Hangman murders more policemen.

Batman’s interaction with Solomon Grundy is interesting when compared to their fight in The Long Halloween. In TLH, Batman treats Gundy like a wild animal that he needs to defend himself against, but by the end of the issue, he has gains more sympathy for Grundy and treats him with more respectful. Now in Dark Victory, Batman talks to Grundy more like a human being by appealing to his intelligence and humanity instead of fighting. 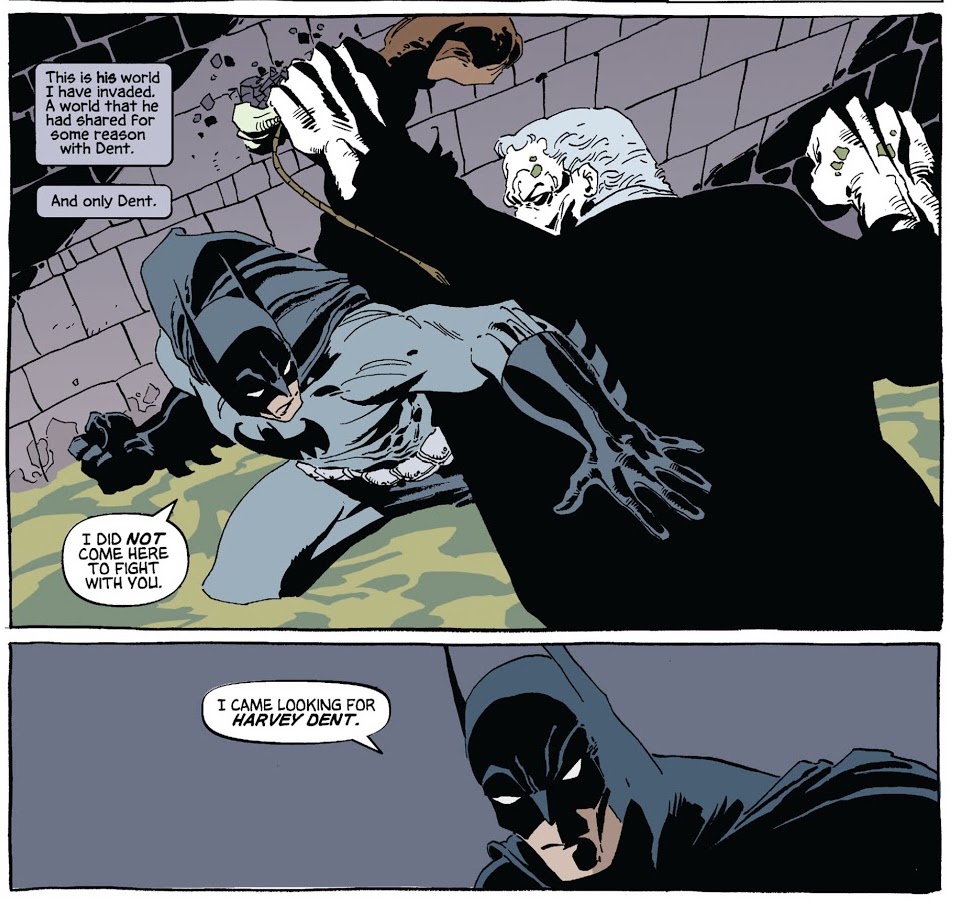 Batman reasons with Solomon Grundy without attacking him.

The gambit seems to pay off for Batman, as a more placated Grundy shows the Dark Knight Two-Face’s abandoned hideout.

Check out the old door that used to be to Harvey Dent’s office. Now it is reversed and hinged the opposite way, representing how backwards Two-Face is now. 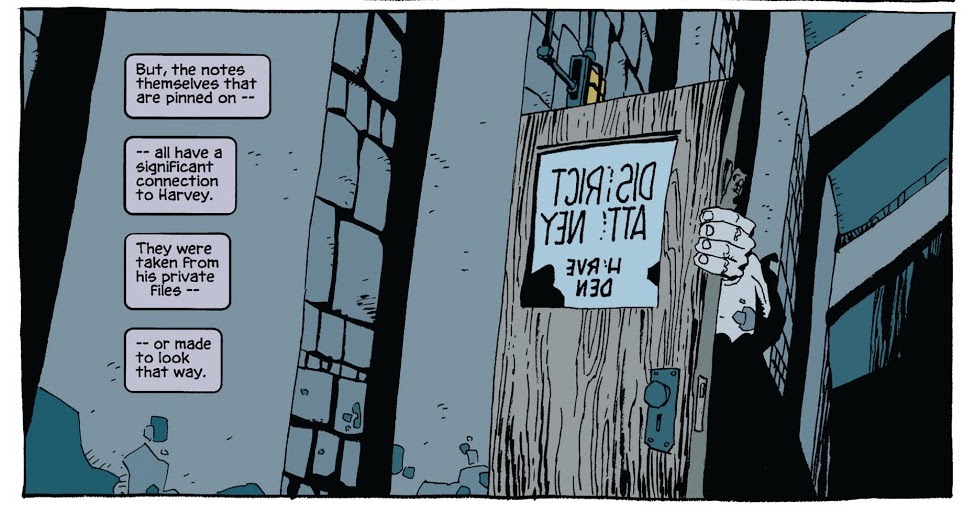 The door on Two-Face’s hideout is backwards, just like Two-Face’s views now.

While inspecting Two-Face’s office, a trap is triggered that blows the place up. Once again, Batman’s shown to be noticeably tired and careless.

After a giant wave of sewage washes them away, Batman barely saves himself and Grundy from the rapids. While all this is happening, a shadowed figure is watching from a distance. Believing that it is Two-Face, Batman once again appeals to his law-abiding side.

You always believed in the law. Come back to it and it will come back to you. 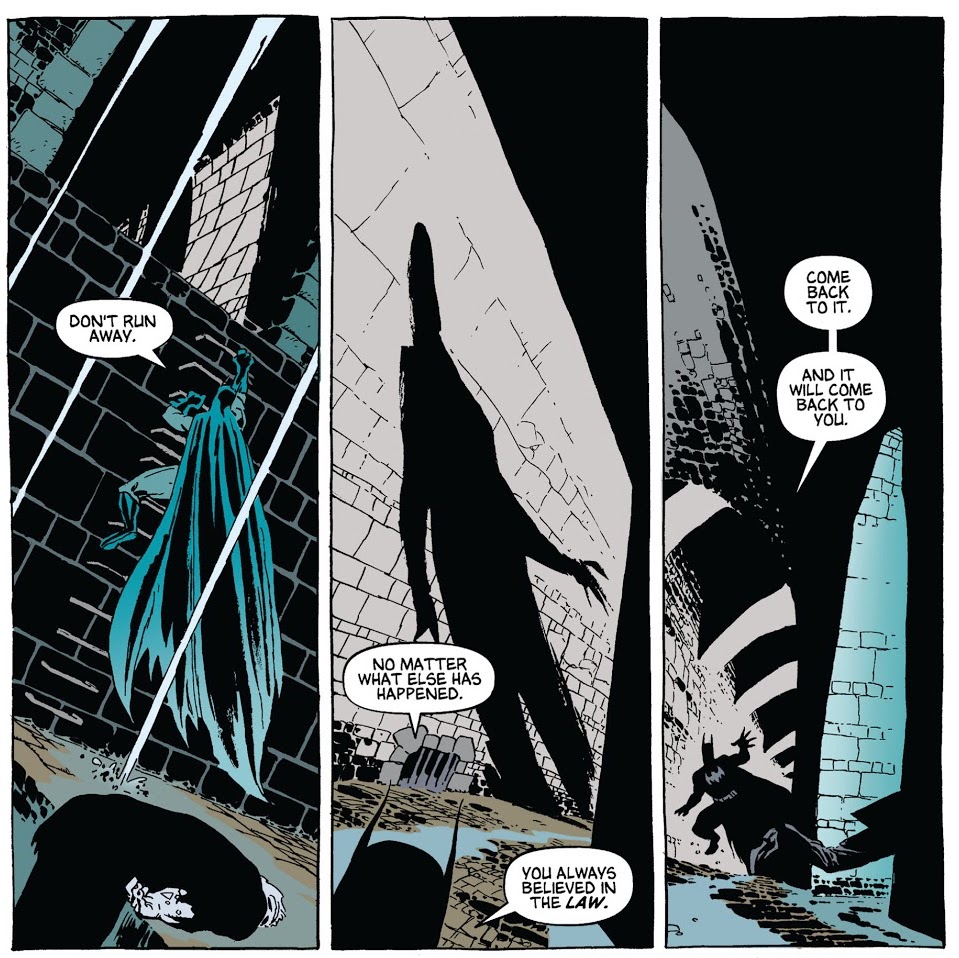 Despite being betrayed in ‘The Long Halloween’, Batman continues to reach out to Two-Face.

Unfortunately, Batman loses him in the tunnels. Once again he is trying to repair his relationship with Two-Face, but he ends up alone. Part of the tragedy of Batman in Dark Victory is not just that he pushes away his friends who help, but he is constantly trying to reach out to the one relationship that is irrevocable.

On the other side of town, Commissioner Gordon and DA Porter inspect another hanged body in the freezer of the Maroni brothers’ restaurant. The victim is Branden who is most famous for leading the SWAT team to capture Batman in Year One.

It is interesting that the serial killings in Dark Victory are hardly ever shown on-page. Perhaps, writer Jeph Loeb did not want to repeat the trope set in TLH where the killings are shown explicitly. Another potential reason is that Loeb felt it was distasteful to show cops being murdered.

Despite not being explicitly connected to the Hangman killings, Gordon arrests the Maroni brothers.

Selina Kyle is having none of it with Bruce. Throughout the entire series, she has been constantly blown off by Bruce on dates. Now, as Catwoman, she is on the prowl and talking her frustrations out by extorting Sofia Gigante. Note, how seemingly casual Catwoman is with Sofia, always referring to her by her first name. 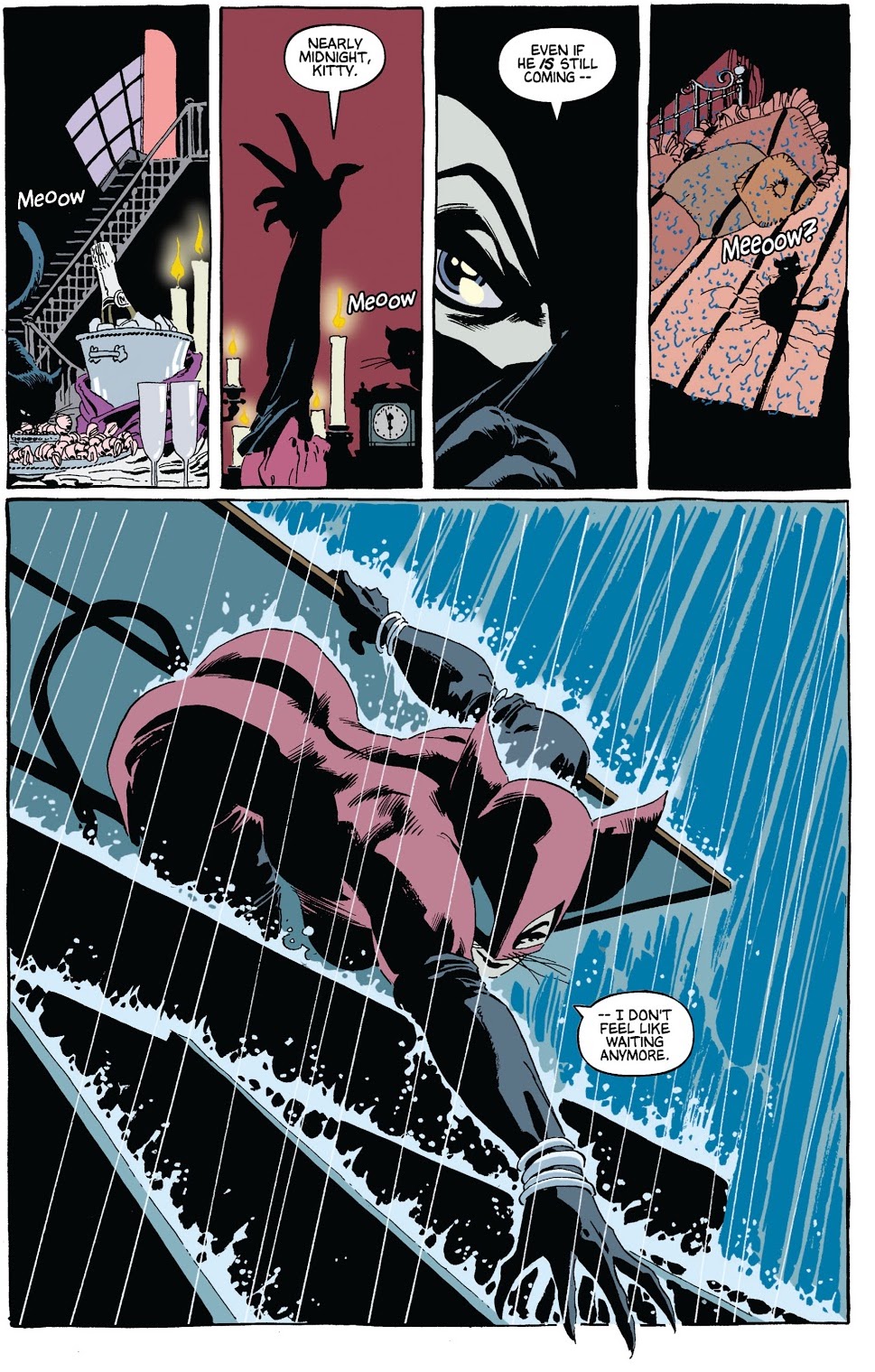 Selina gets bored waiting for Bruce and becomes Catwoman.

On New Year’s morning, Bruce finally meets up with Selina. Despite, her insistence that she broke up with him, she still invites him in. This scene is one of the rare moments in Dark Victory where Bruce makes an effort to mend interpersonal relationships. A potential reason why Batman felt extra sympathy after spending all night with the innocuous Grundy. Once again, Grundy seems to resonate with Batman on an emotional level. 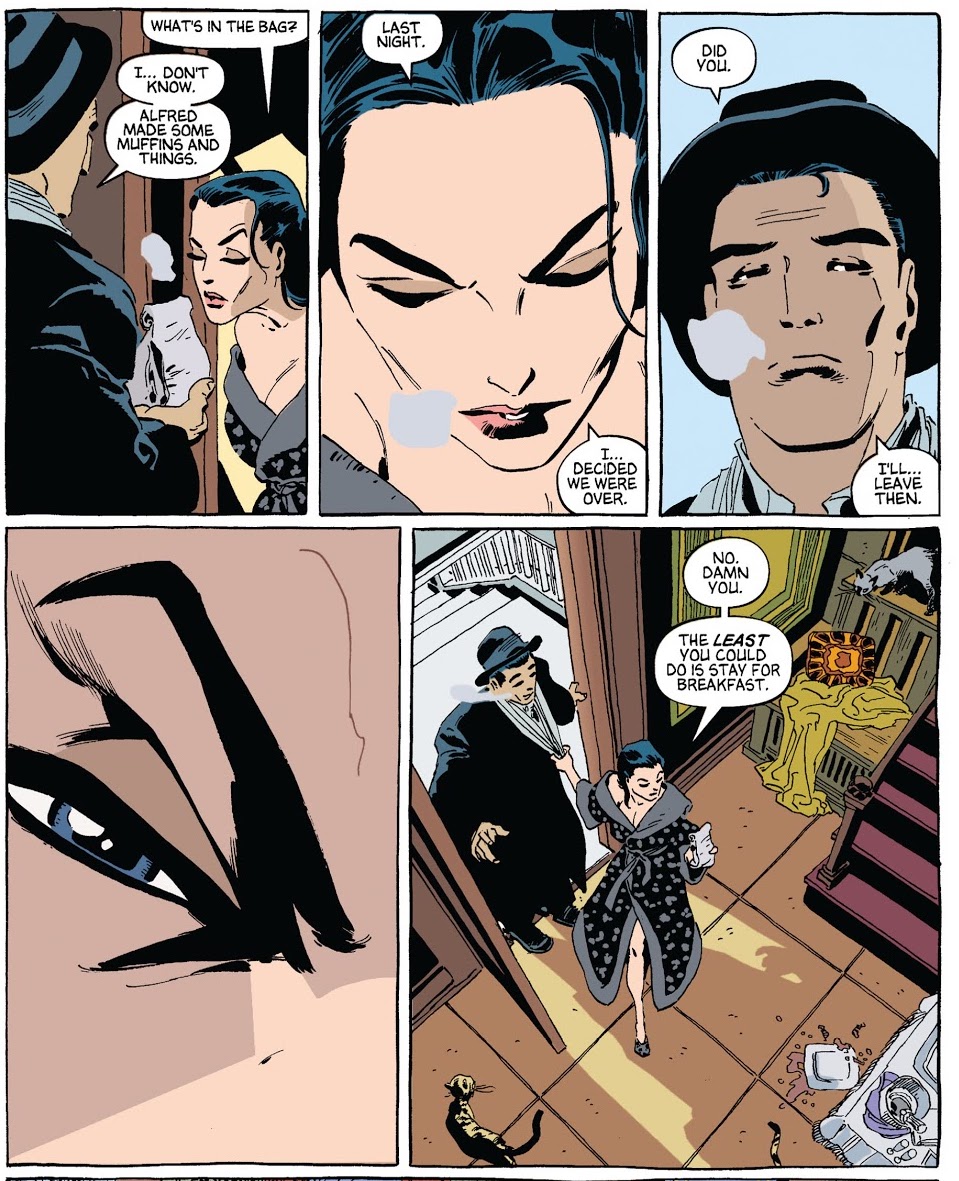 Bruce reaches out to Selina.

Porter also has some some relationships brewing. First, she is outside on the court’s steps when a mysterious figure grabs and kisses her. In probably the most racy double entendre of the entire series, Porter claims, “You’re all wet. Now, I am all wet too…” 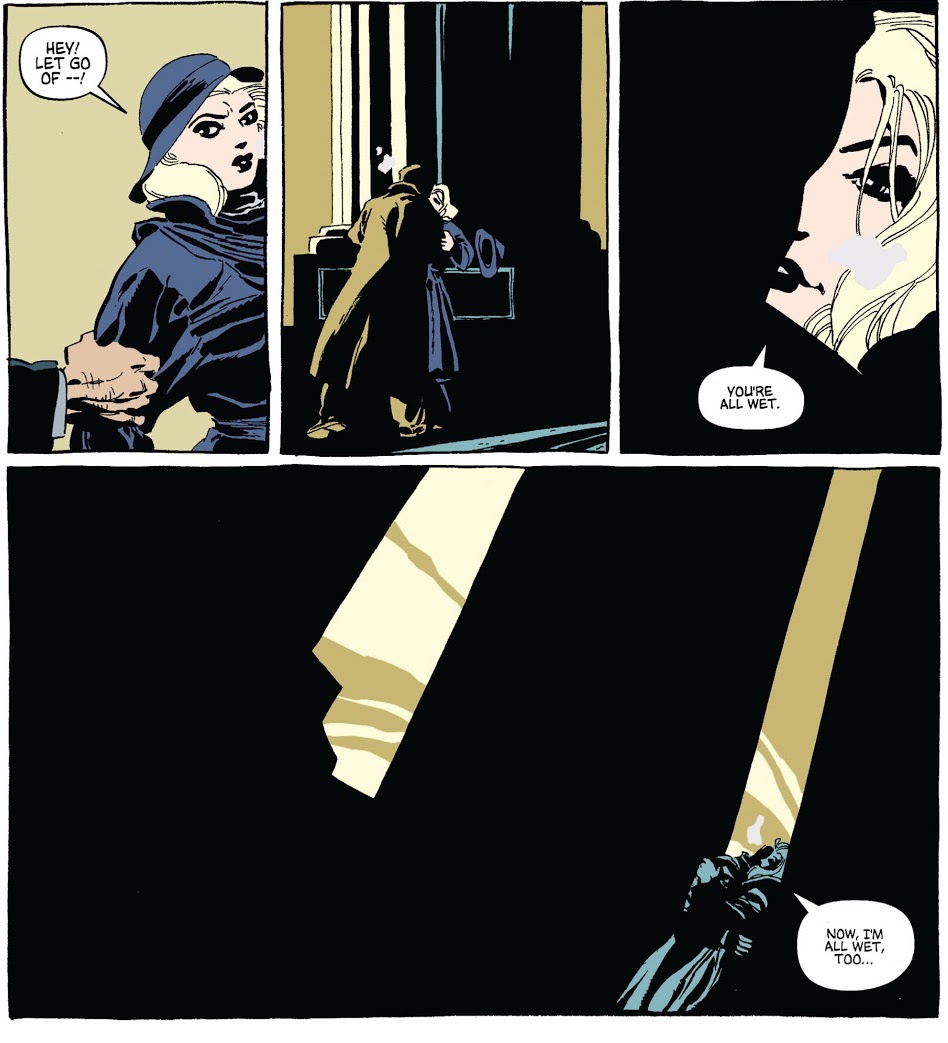 It should be noted that Dark Victory is a much more sexually explicit story than The Long Halloween. For one thing, Tim Sale draws provocative females in Dark Victory more often. In this issue, Selina’s bare backside is in one shot, there are scantily clad dancers in the previous chapter, and Porter is seen in lingerie multiple times in various issues.

It could be argued that the use of sex does not necessarily add to the story, but it certainly does make it feel more adult. It does not really feel gratuitous, especially given Dark Victory‘s noir roots. What seems to be the case is that writer Jeph Loeb, along with Sale, are more comfortable introducing seedier elements in their storytelling.

Later, Porter also begins to mend her frigid relationship with Gordon. In his office, Gordon reveals a short-list of names he wants to recruit for his personal squad. Unlike, Batman, Gordon attempts to reach out and connect with Porter by offering her a place in this squad. 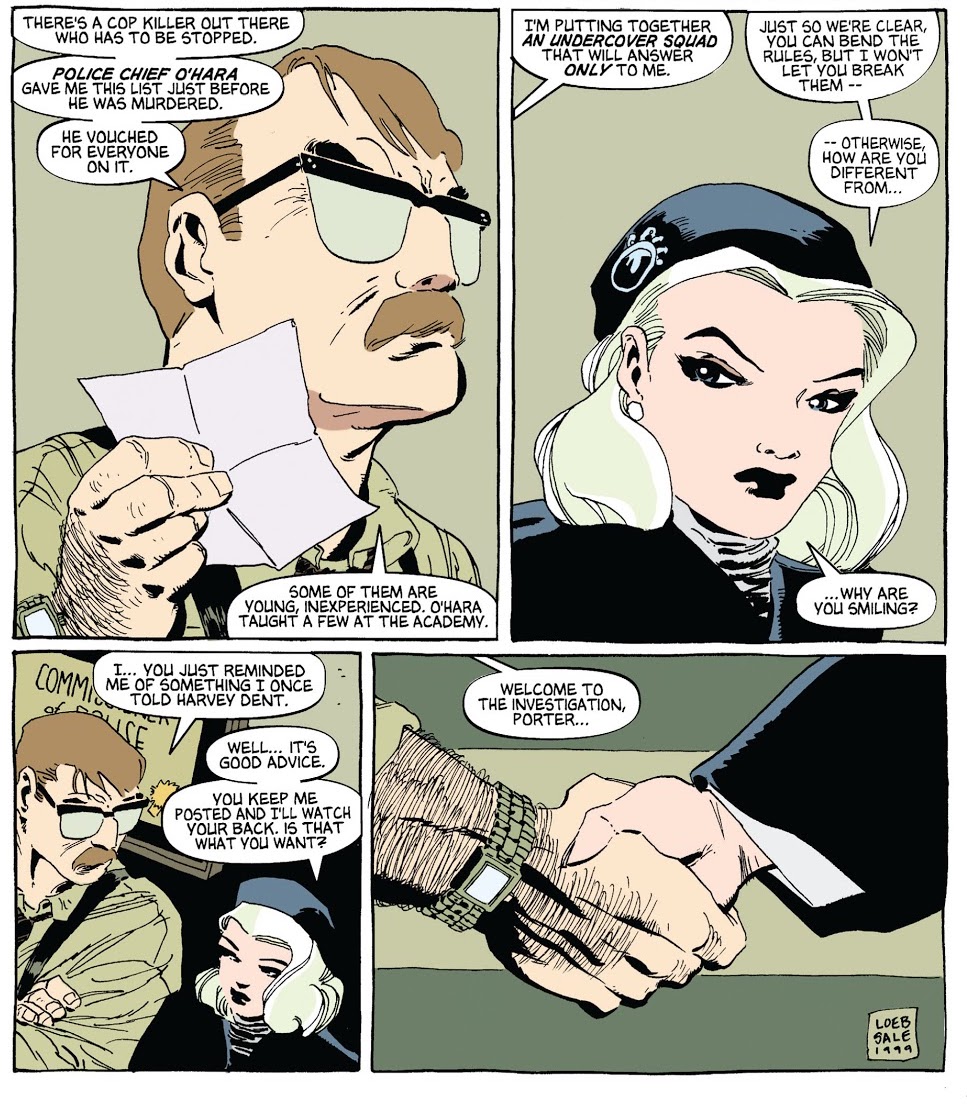 Gordon reaches out to Porter.

This issue takes a big step forward on a number of subplots. Readers are also teased a couple mysteries and Batman is being proactive, instead of reactive in searching for Two-Face and Hangman. However, there is an unusual absence from some main players, like Two-Face and Alberto Falcone. While it does not affect the issue’s quality, it slows down the overall pacing.