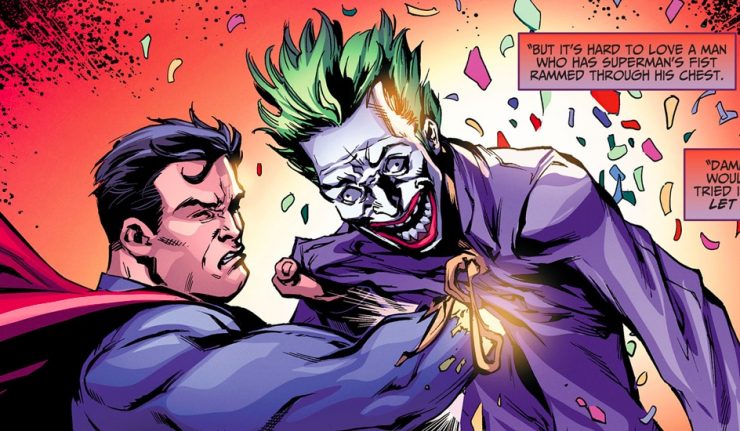 It’s no secret that a lot of Suicide Squad footage didn’t make it into theaters. The production of the film saw sudden changes in creative teams. That, coupled with interference and involvement of Warner Bros. themselves, left a lot of raw material on the cutting room floor.

One detail that was left out of the final cut was a scene featuring Jared Leto’s Joker. It’s rumored that a trove of unused footage of Leto’s performance exists somewhere.

These legends allow fans to imagine just about anything, because little has been confirmed. A variety of scenes could have been shot, makimg it all the more funny when the film’s director, David Ayer, starts to fuel the urban legends. 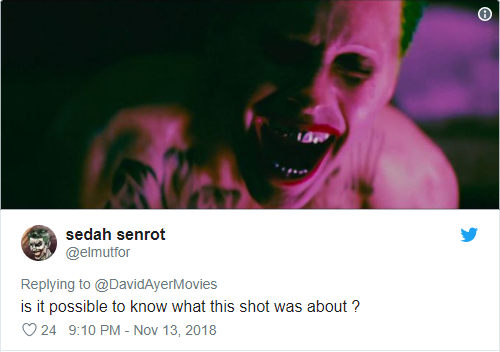 Many new shots do come out. This curious fan on Twitter asked the director, David Ayer, just exactly what the picture is. It’s a reasonable ask, I’d say. Ayer had other ideas.

Um… this certainly isn’t what you’d expect to hear. It calls to mind that moment from Injustice as you can see above. It’d be a very one sided fight, if it were to ever happen.

Thinking about it, it is both in and beyond the realms of possibility, and completely unlikely. When you consider the timings, when could Superman have fought the Joker without Batman becoming involved? Ben Affleck would not have stood for it before their fight in Batman v Superman. Superman wasn’t exactly around after that film, so it chronologically couldn’t have happened.

At the same time, the majority of Ben Affleck doing quintessential Batman things is seen in Suicide Squad. It also featured a surprise cameo of Ezra Miller’s Flash to the surprise of everyone. Seeing Superman wouldn’t be that unlikely a surprise.

Now he’s sufficiently pulling our chain. Sure this is a very young DC Universe and Superman wouldn’t have the fighting skills, but he’s still powerful. As for what really happened in the scene, Ayer hasn’t confirmed yet.

It leads to a growing desire for an even longer extended cut of the film, to emphasize all the footage of the Joker to dispel hilarious myths like these.