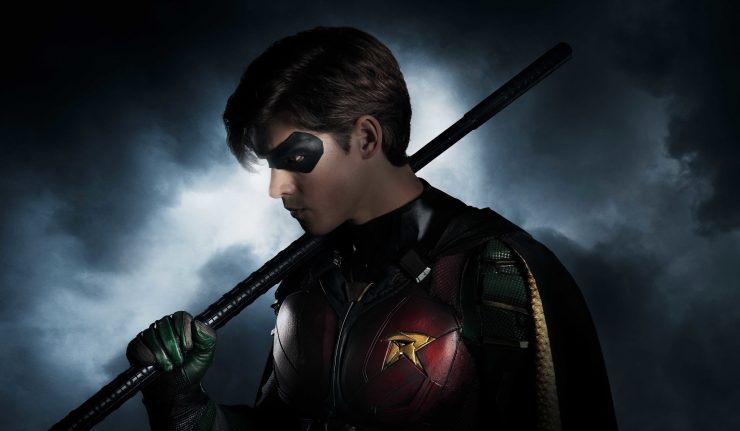 The Titans shockwave heard around the comic world has infiltrated SDCC on many levels. The series trailer shows us a darker and grittier version of the heroes, with Robin laying the harsh blow of “F*ck Batman.”

From Norman Reedus to Sarah Paulson, with even the voice cast of DuckTales getting in on the action with their versions of the line. It is safe to say this is the line for this year’s SDCC. When looking at the context of why the line is there though, it is hard not to agree.

The trailer shows a piece of the tone of the show — “The show’s not all that,” producer Geoff Johns explained during a recent interview. “But it does make you go, ‘Why is he saying [F**k Batman?]’ If you look at when Robin first left Batman in the comics, there was a lot of uneasiness and him being lost. Titans is really a series about these different characters that are all lost in their lives; just like the greatest comic book Titans run ever, by Marv Wolfman and George Pérez, it’s about all these lost characters find one another. And they’re all struggling with something, and Robin is clearly struggling with his past with Batman.

Seeing them coming straight from canon for the depth of feelings for these characters is a breath of fresh air in my opinion. It will be wonderful to see the not so happy and cheerful side to the Titans, no offense to the fantastic Teen Titans Go! series. Getting a glimpse into the angst and strife as they find their way through the world. From what the trailer shows and the words by the writers and producers, this is indeed set to be a side of the Titans that shows to be more relatable and right up comic fans’ alley.

The official synopsis for the show further proves this line of thinking:

Titans follows young heroes from across the DC Universe as they come of age and find belonging in a gritty take on the classic Teen Titans franchise. Dick Grayson and Rachel Roth, a special young girl possessed by a strange darkness, get embroiled in a conspiracy that could bring Hell on Earth. Joining them along the way are the hot-headed Starfire and loveable Beast Boy. Together they become a surrogate family and team of heroes.

The series is set to air on the DC Universe later this year, and as more word becomes available, the more excited I’m getting to see just what they are plotting with the show.

What are your thoughts on the trailer? What would you like to see come out of the series? Any favorite villains you think might make an appearance? I will be waiting for Slade to show.

Keep an eye on Dark Knight News for more information as it becomes available!