Tom King Says He’s Only Halfway Through His Batman Story

Batman’s wedding has been on everyone’s minds for months now. The build-up for this story has attracted readers and gained new fans. When you think about fictional couples, the first one that comes to mind is Batman and Catwoman. Why? Because it always seems, even to this day, that we’re only halfway through the story.

Comic books aren’t just about the story, but the art as well. To create an epic run, you need the artist’s support to the story that is being told. For Batman Rebirth, they needed only one man to bring the story to the top. One man to make it unforgettable. They needed Mikel Janín.

Janín brought Justice League Dark to life with impeccable finesse and did it again with the Grayson series. He’s brought in more female readers to the fandom than ever before, mostly due to his very neat and clean style. I am very hard on artists. Especially those that dare touch Batman.

So, when I have learned that Mikel Janín would move on to draw the Dark Knight’s adventures, you can imagine the wide smile on my face. I knew from that moment, that whatever the story would be, he would make it an instant classic. 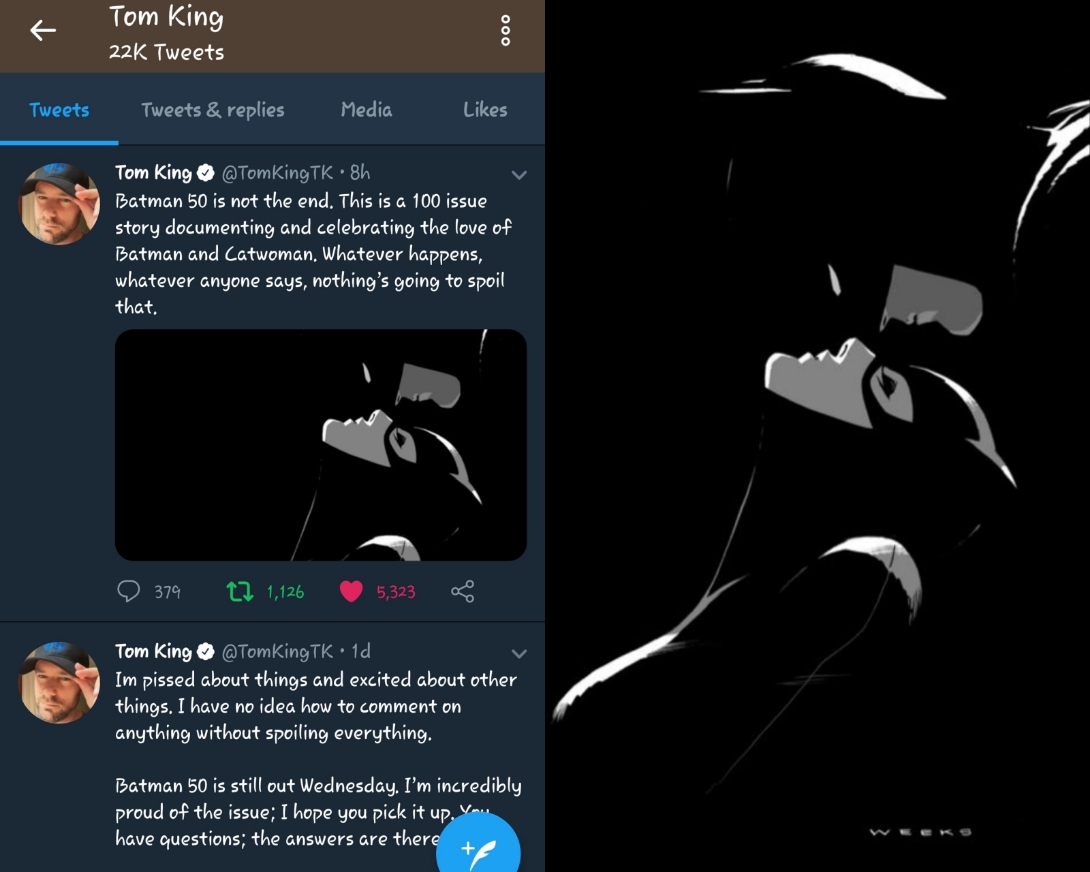 Without revealing too much, as I’m sure some of you haven’t read the entire run of Batman: Rebirth which all leads to the wedding of the year (sorry Prince Harry and Meghan) here is what writer Tom King had to say about Batman #50.

We’re halfway through that journey. It’s a long story, a long journey. It could have a happy ending or a sad ending – Tom King, EW

The psychology of the Batman character is very dark, very complicated with many layers. The fun of being a writer for Batman, I’m sure, is to play with his pain. Imagining what could bring him to the edge of never coming back. Flip a coin and see if he’ll make it or not.

Isn’t that twisted? I believe so. That’s what keeps me coming back for more. I want to see Batman on his knees. I want to see him beg for it to end. And then, pushing forward. Why? Because he is a symbol of hope. He is a human without any superpower, but his own will to always come back.

Tom King is now proving himself as an amazing Batman writer. After all, he had a plan from the very beginning.

With Batman, you have to think about a plan of a plan of a plan. Batman’s mind is complex, obsessive, paranoid and running at a hundred miles an hour, always thinking about endless possibilities.

But to break him, you have to find that one weak spot, the one patch of flesh that has no scars on it and strike. King found it. The Batman Wedding is only the halfway point of this story.

By stating that we are only halfway  through King lets us know that there was more to the wedding than he had lead us to believe. This was all orchestrated grim the start, but to what end? Who knows? Was everyone that appeared on that ominous final page of issue #50 involved from the beginning? Was there any true love in this story?

Many possibilities, many mysteries and twisted endings are now taking form in my head. With Mikel Janín as the artist and Tom King as the writer we can only hope for the best to come… or the worst. Batman has not yet  finished suffering. The more you know he can take, the more it is pleasurable to torture the Batman.

I’m getting too dark, so I’ll stop there. Haha!